Not every post can be a Fresh Prince. Sometimes there must be an Urkel post, that being a post that is just a little (lot) bit nerdy. I happen to have a few such posts waiting in the wings, so I figure why not shoot them all over the Internet in a single week of unforgiveable nerdiness I am lazily referring to as “Nerd Week.” Enjoy! 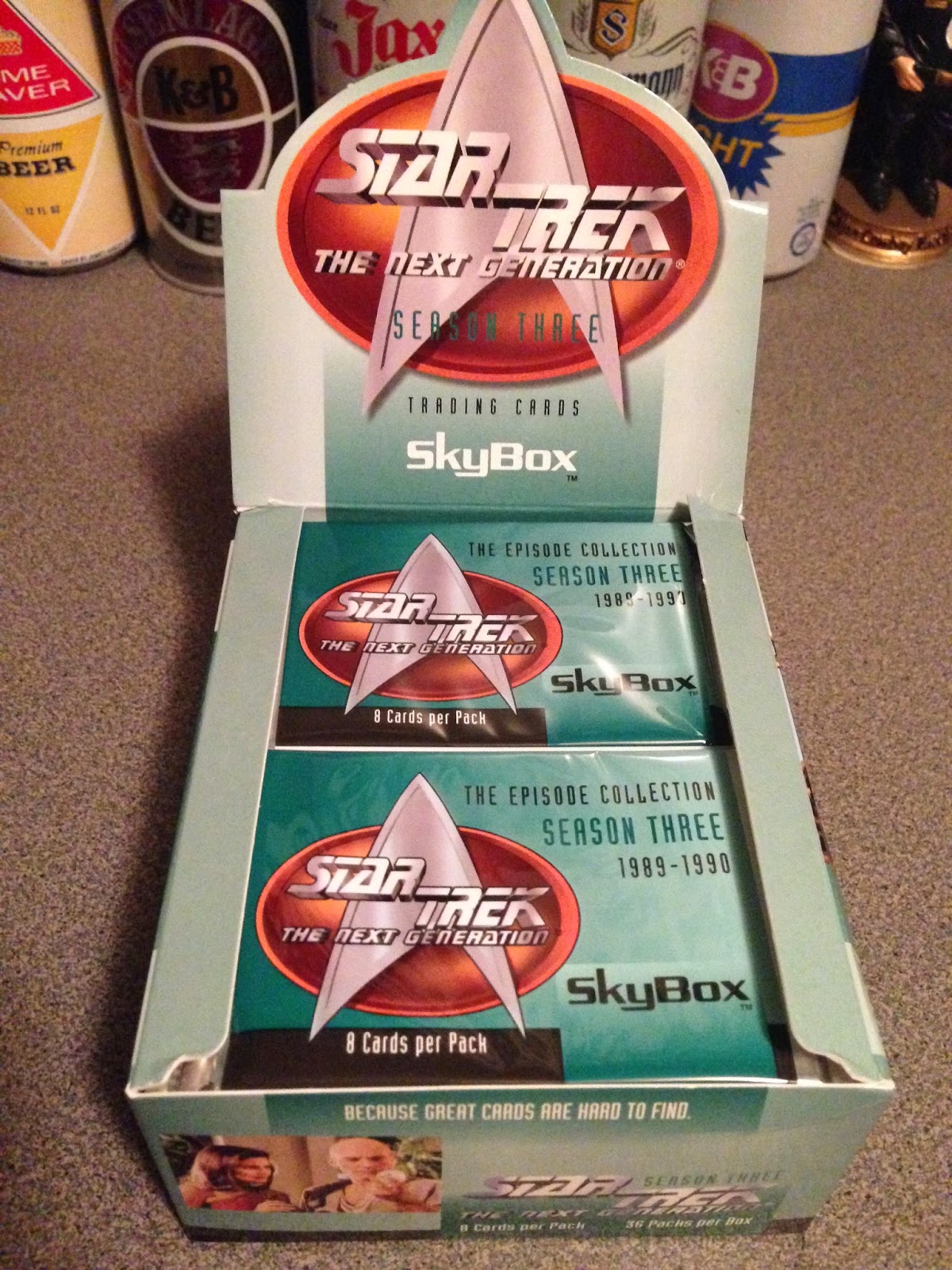 I bought this box a few months ago in a Dave & Adam’s binge. It was only six bucks, and my curiosity got the best of me. Plus Season Three was so good – new uniforms, the return of Beverly, everybody starts having (or building) offspring, the seeds of numerous continuing storylines, and an absolute explosion in general character development.

Let’s look at the inserts first: 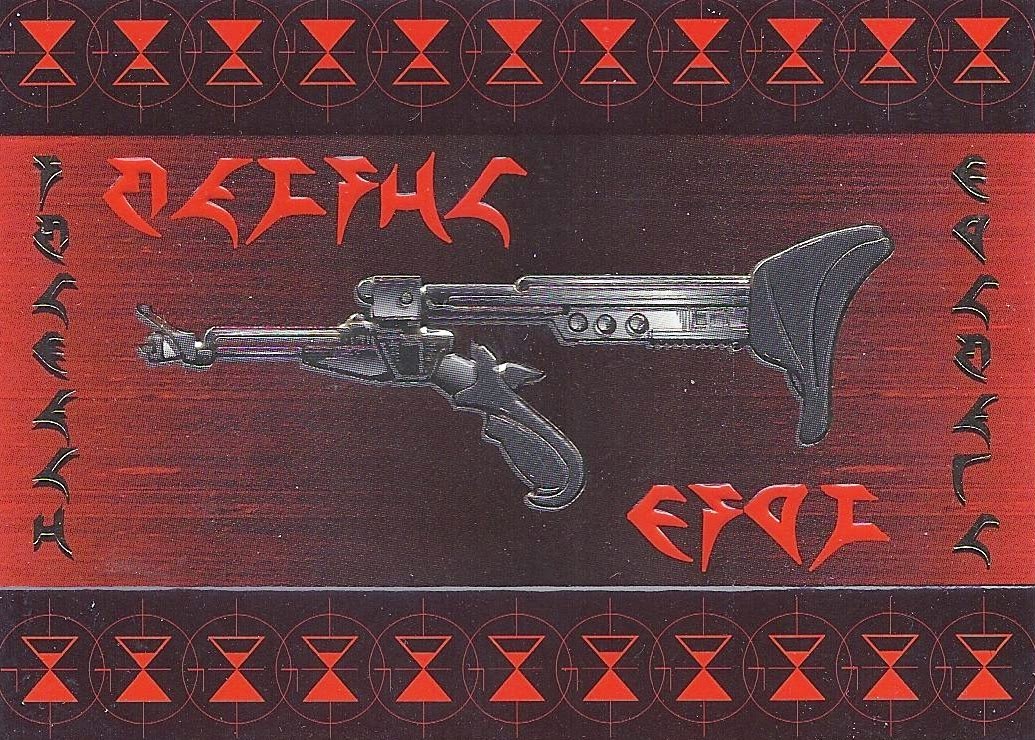 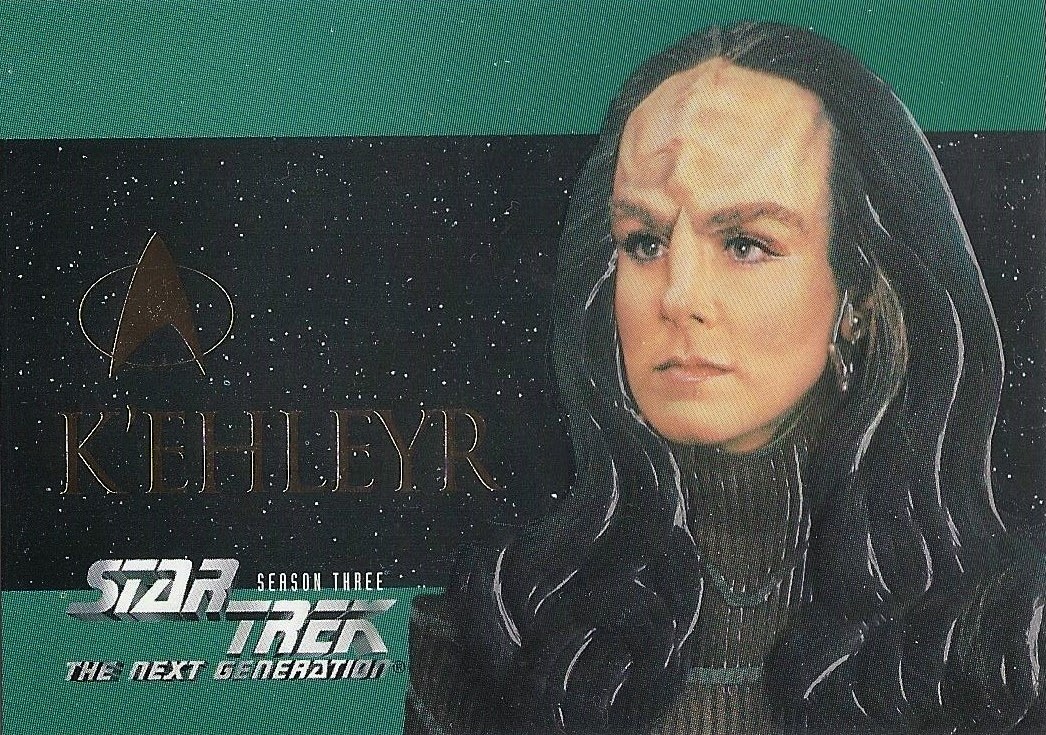 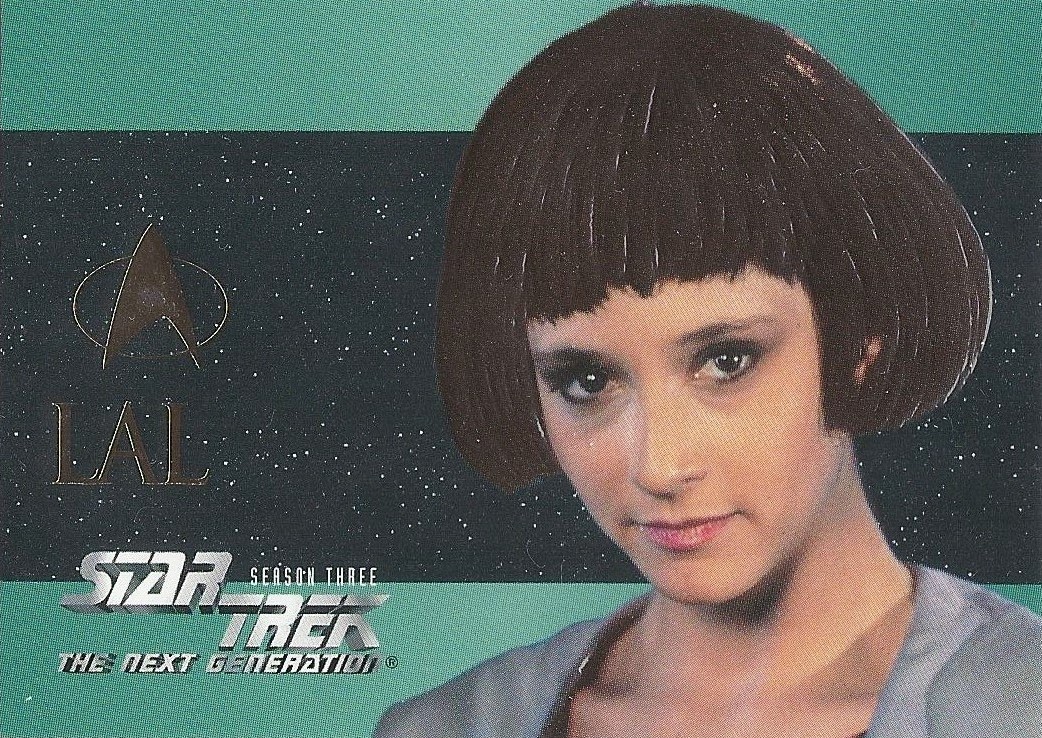 The character cards include a pair of the cutest ladies ever to grace a deck of the Enterprise D, Data’s daughter Lal and Worf’s special lady, K'ehleyr. Both characters are super adorbs and possess high butt-touchability. While K'ehleyr has that tall, athletic, lobster-headed she-beast thing going for her, I’m more of a fan of android-next-door Lal’s sporty bangs and ability to use contractions. 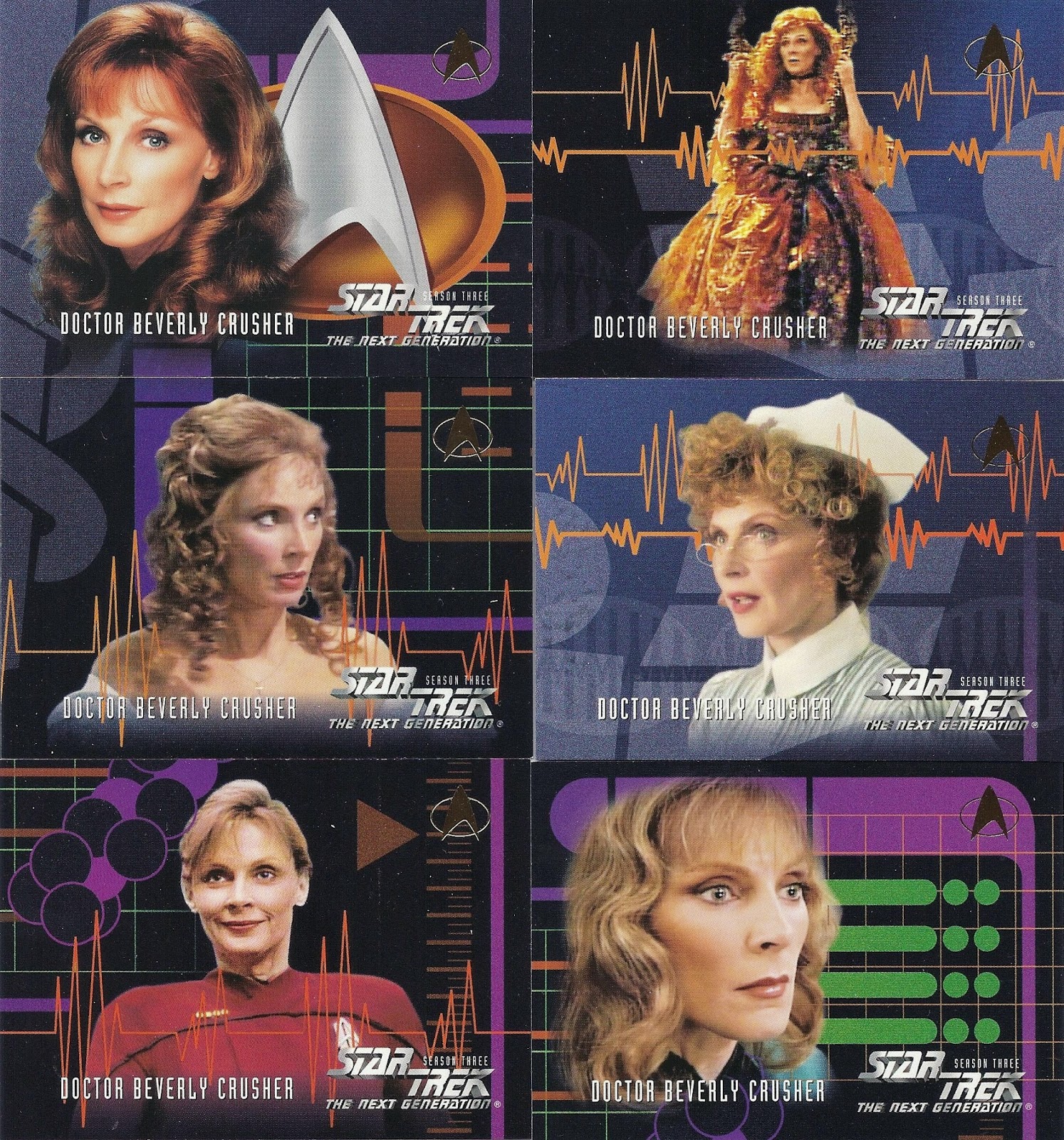 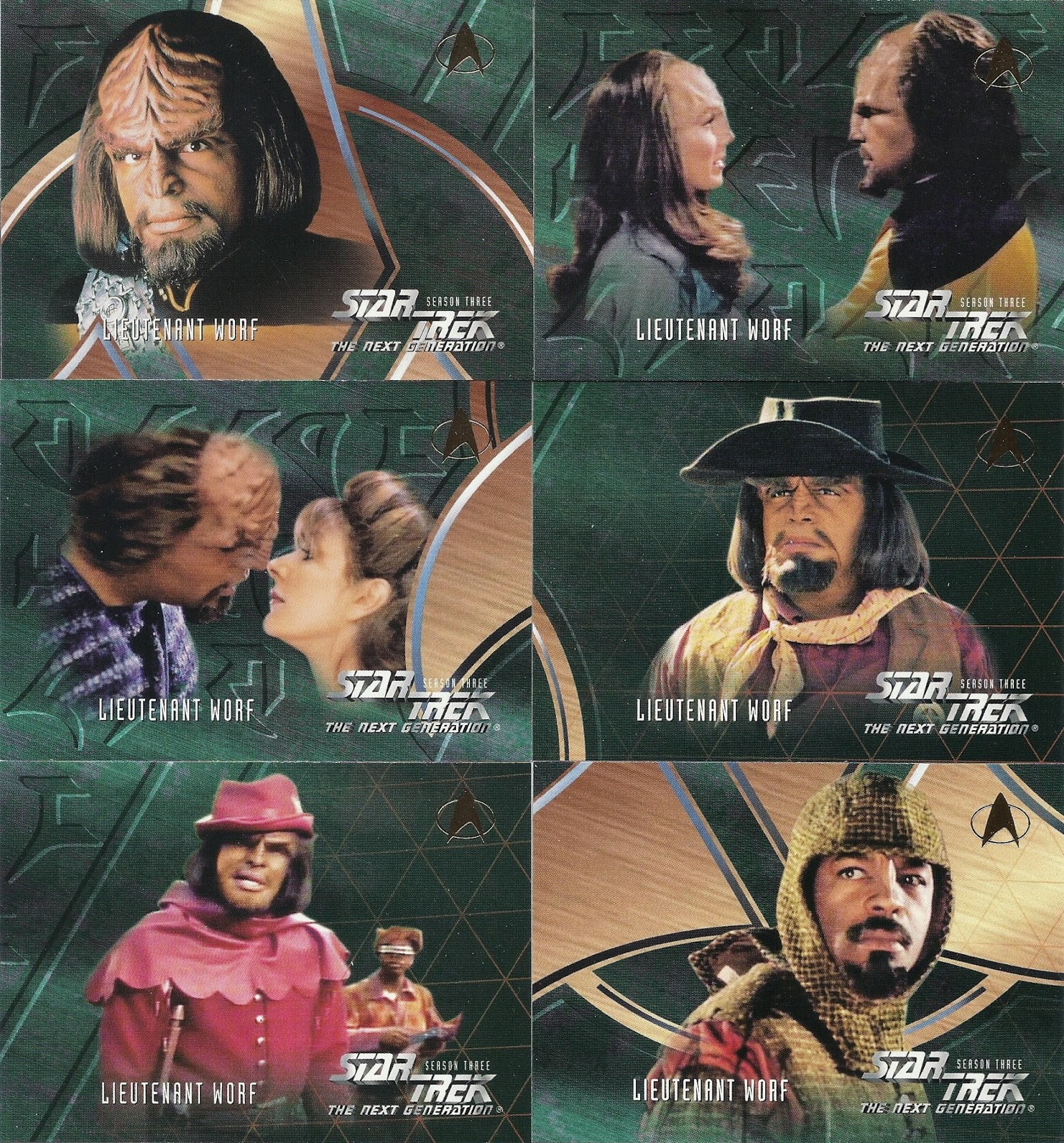 Here's the base set:


For the purposes of the set, the Season is divided up into three-card runs, one run per episode from that season.  The checklist design is reminiscent of the computer interfaces from the show.  Pretty cool. 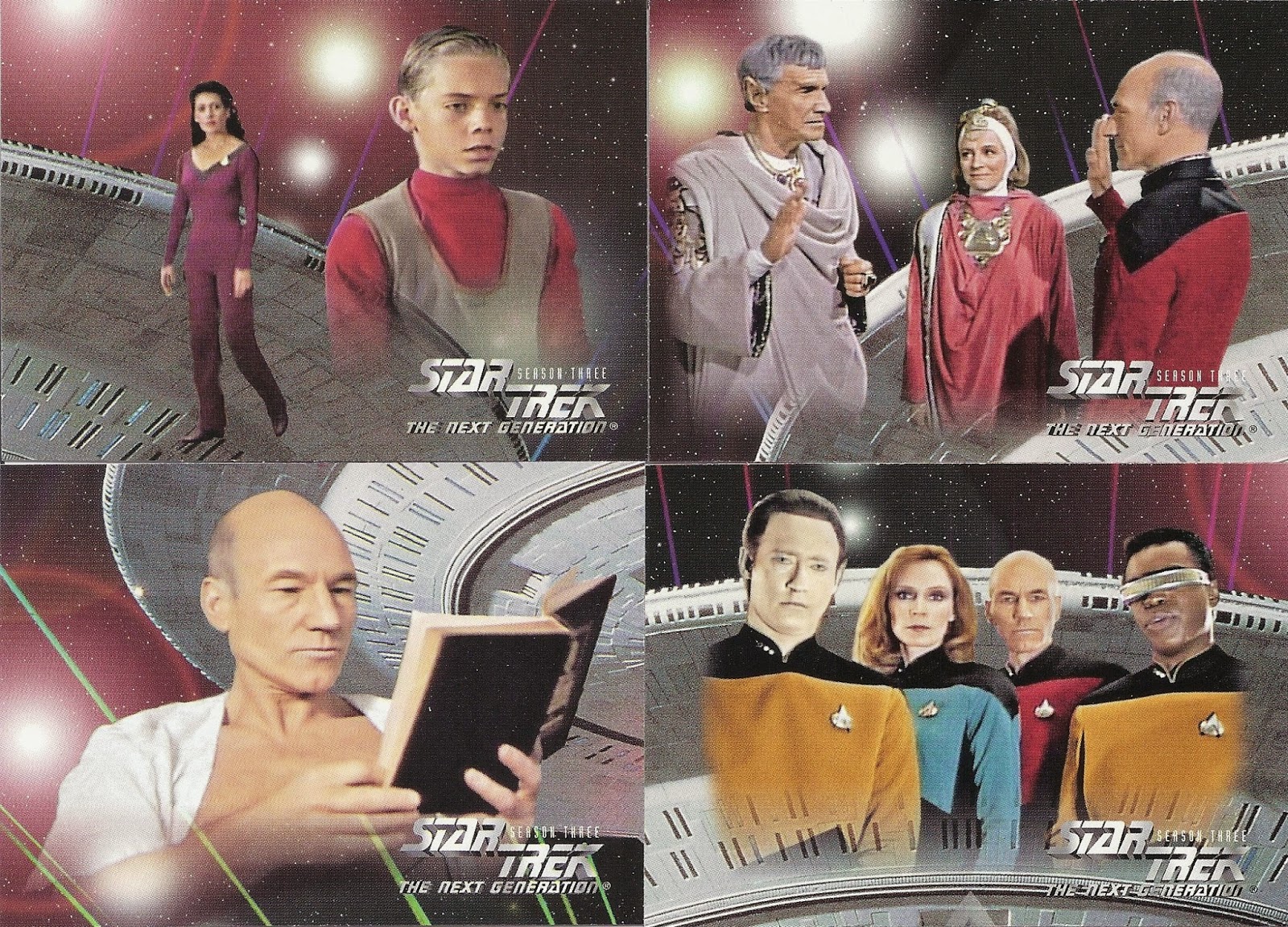 The base cards are exactly what you would expect: screen shots taken from episodes back before high-def was a thing. They’re grainy and of questionable quality, and they make the show appear dorkier than I remember it ever being.  The superimposition against a spacy background also comes across a little campy (like the show itself), so I absolutely love it. 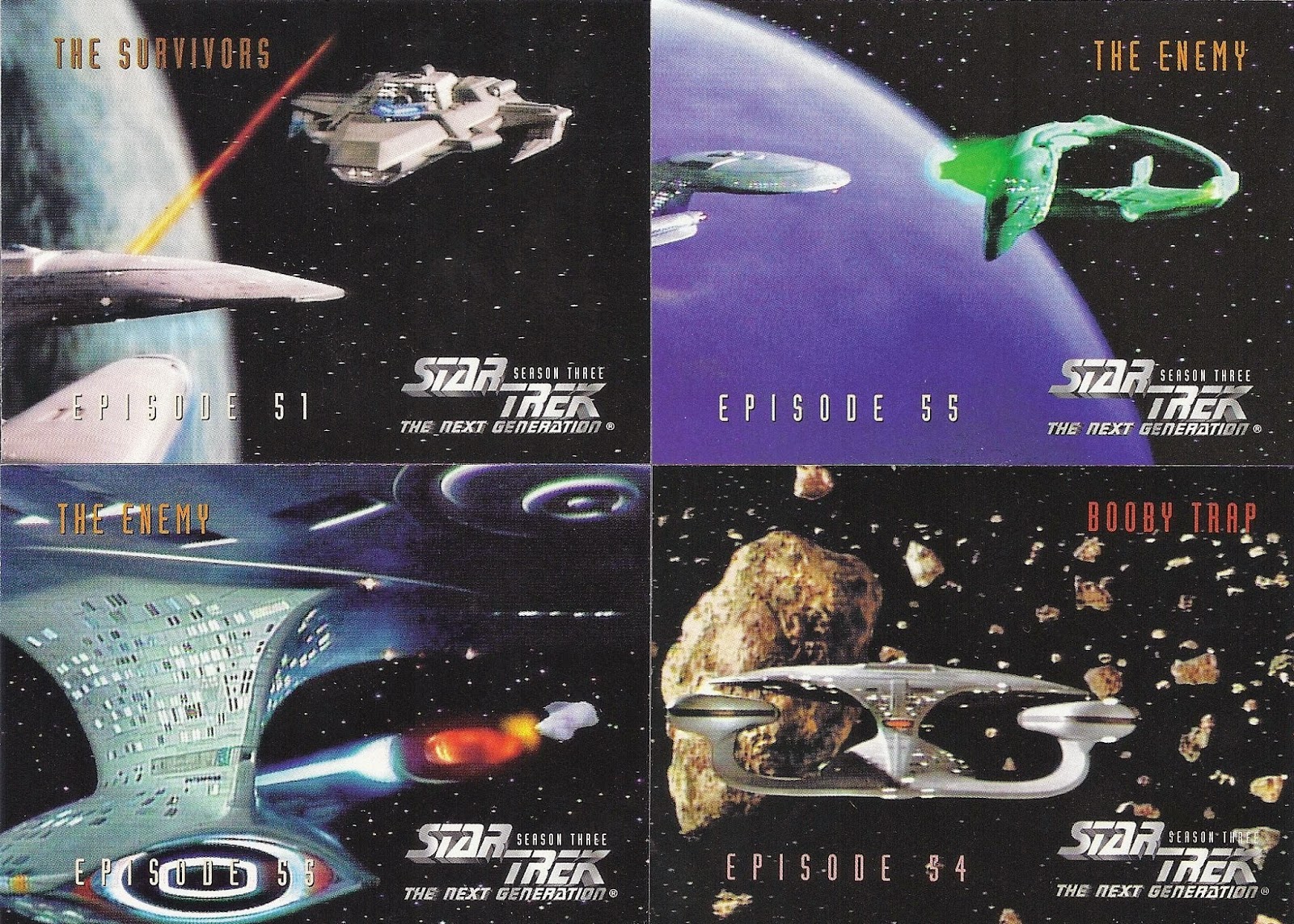 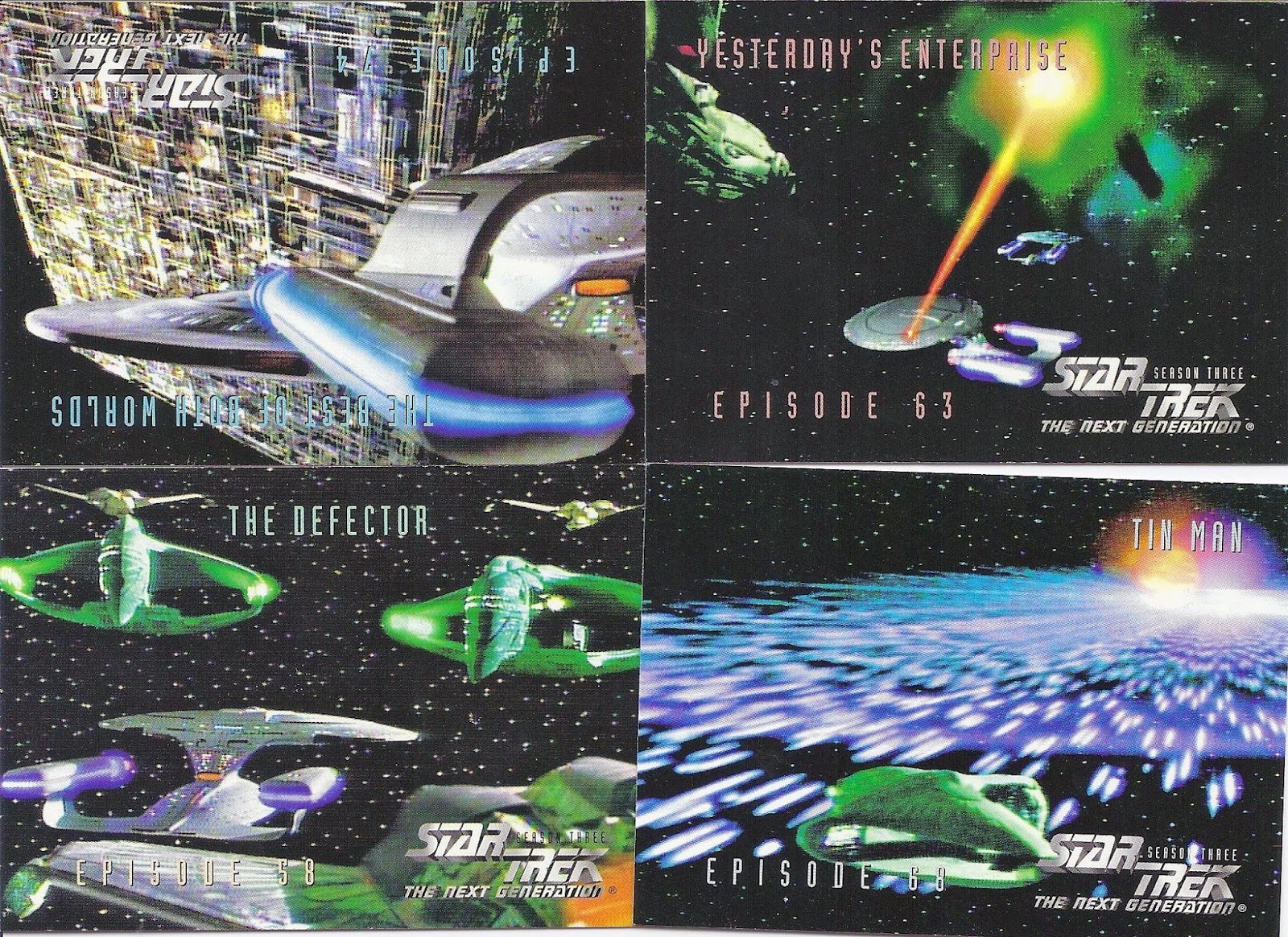 The space shots featuring ships look a lot better than the character cards. The same was true in the show as well. You have to admit that for its time, the special effects of Next Gen were pretty outstanding. 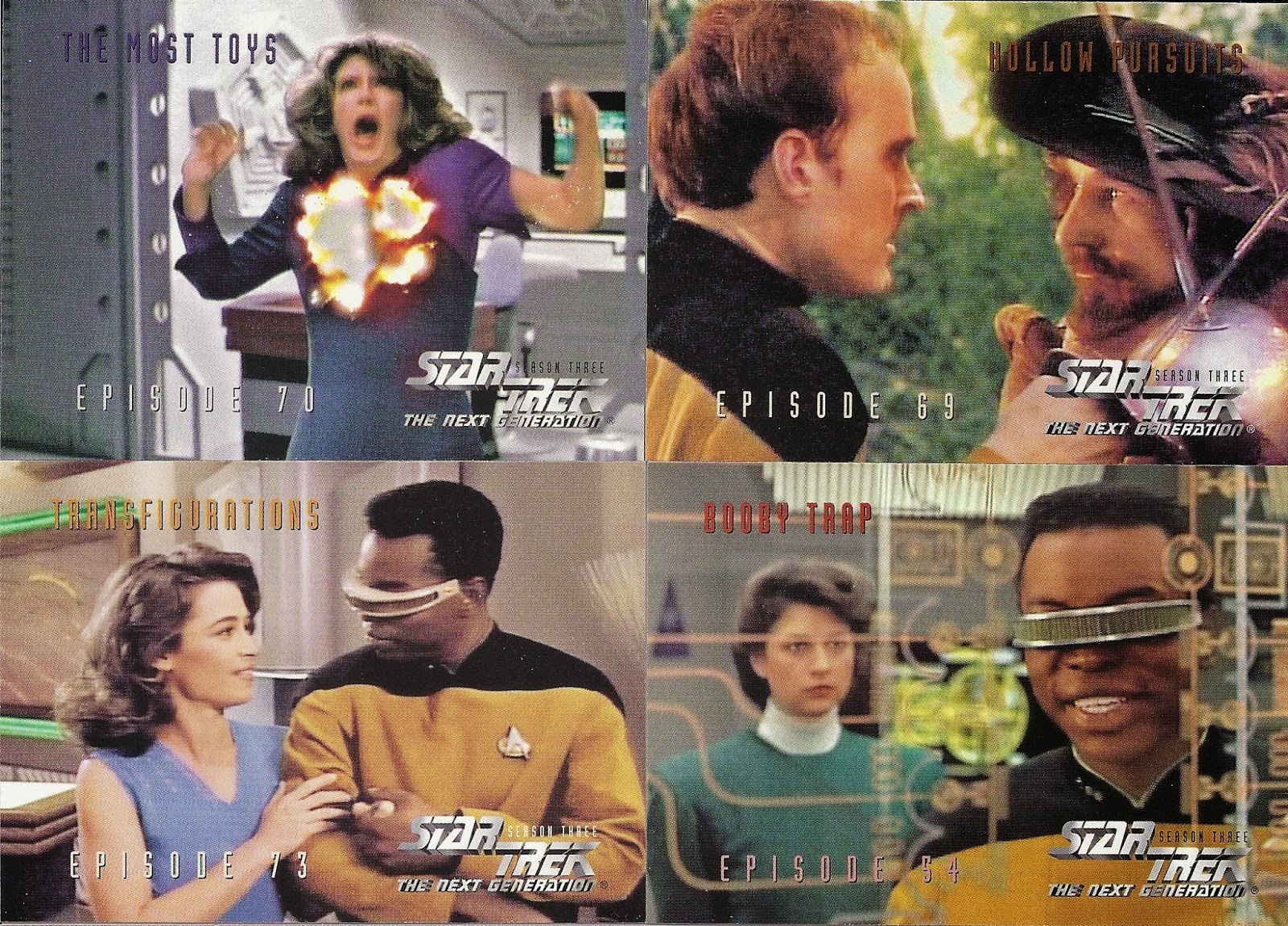 Did Geordi get some?  Yeah, I like to think he did. 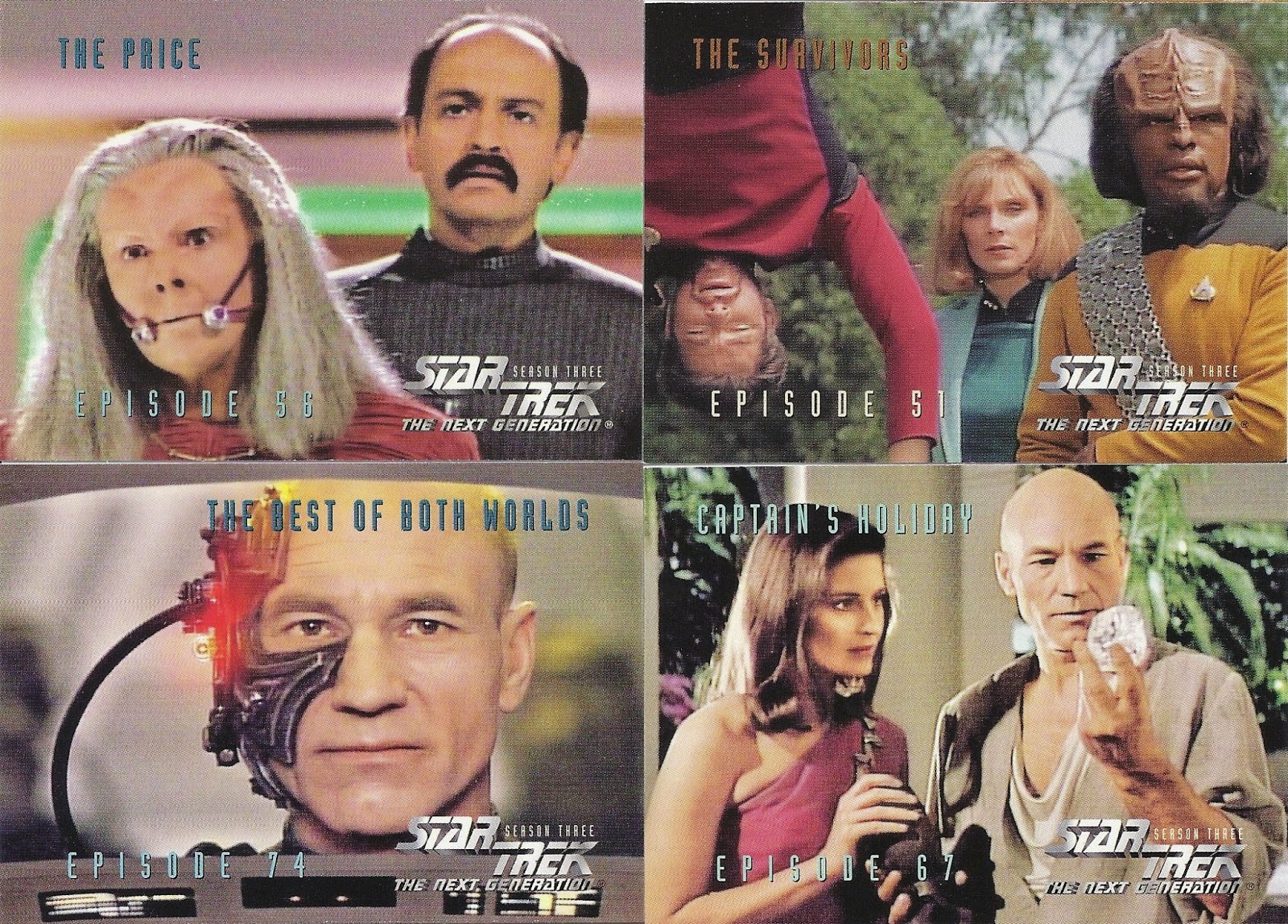 Did Picard hook up with Vash?  Yeah, pretty certain about that one. 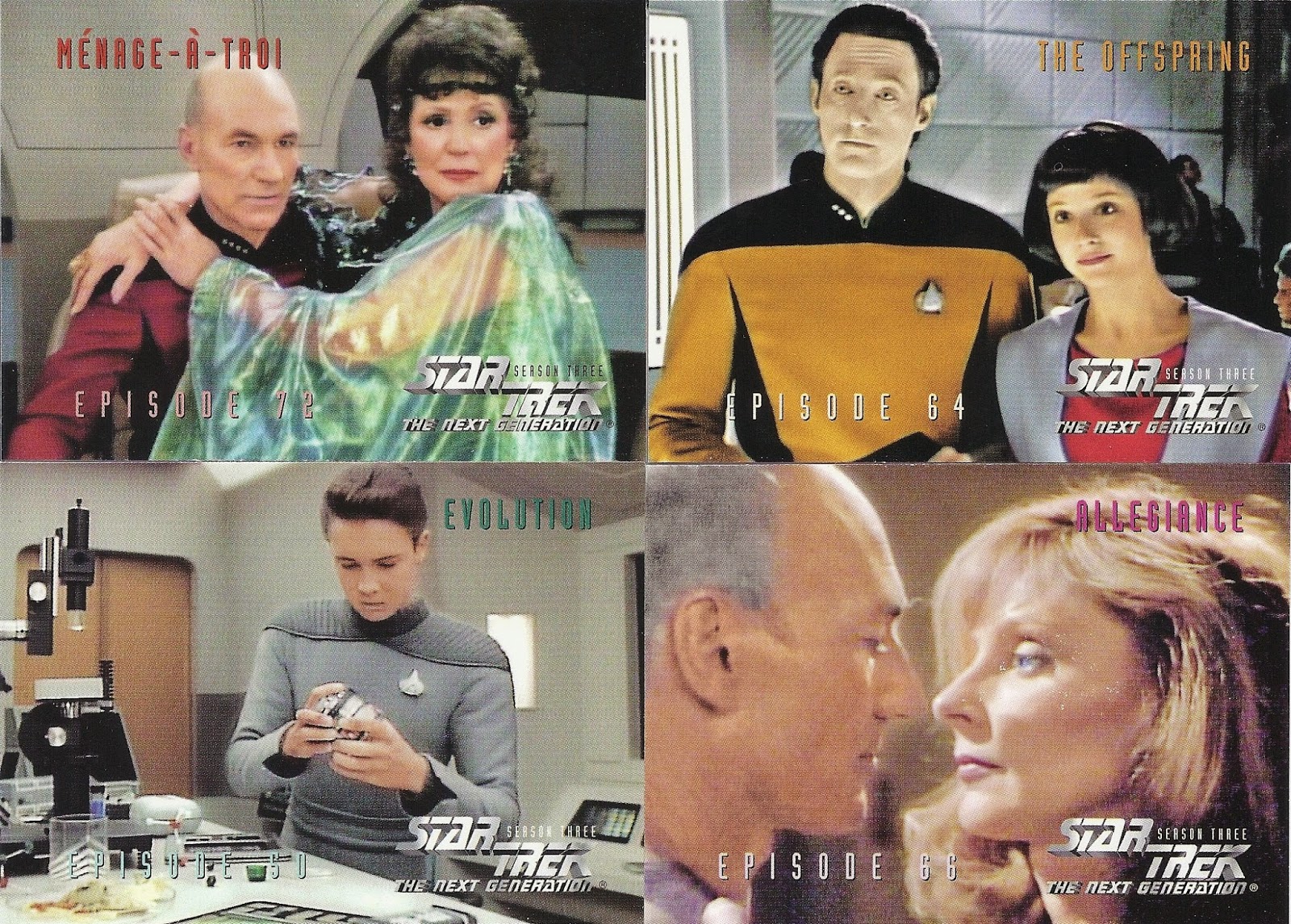 That Menage-a-Troi card is amazing on so many levels.  Great scene.  There's Lal again, looking cute as can be.  She ended up playing Lizzie McGuire's mom.  I didn't already know that - IMDB told me when I checked to make sure she wasn't underage so I could be legally attracted to her.  She was 28.  Phew.


Anyhoo, I was able to pull two complete sets out of that box.  How often does that happen with baseball boxes?  I also got a stack of dupes.  They're yours for the claiming, gentle reader.

Am I going to collect the other Seasons?  Not actively.  I guess I wouldn't turn them down if I happened upon them at some point.  Perhaps I'll find a super cheap box at a show or something.  Can't count that out.  But no, I'm not in active pursuit of them.  That's like a whole other level.