I've been working on this list for a few years now, and it's finally ready to post. Welcome to the online database of Ken Griffey, Jr. baseball card cameos!

A cameo is just what it sounds like, a player appearing on another player's card whether purposefully or by happy accident. Some look intentional and some don't, as you will see.

Cards that I do not consider cameos include team photos, non-player cards, multi-player cards, and non-player-specific checklists. I am also not including any small sets made specifically for Ken, Jr. and/or Ken, Sr. such as those from Star, Mother's Cookies, Pepsi, and the excellent 1995 Pacific Mariners Memories set. I still count all of these cards as Griffeys, but cameos they are not.

While cameos are a great excuse to collect some exciting parallels you may not otherwise be able to afford for the player you love, I am not including any parallels of the cards listed below for brevity's sake, though those most certainly count. Also, please feel free to comment here with any Griffey cameos I may be missing, and I will see to it that they are added. You can find a list of possible but unconfirmed Griffey cameos below the main list, so feel free to weigh in on those as well. 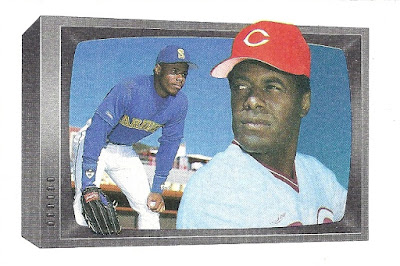 While this is certainly in the spirit of a multi-player card, it is actually Ken, Sr.'s base card in the set which make Junior's appearance a cameo. 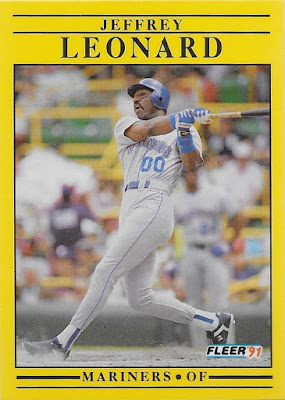 The first of many Griffey-on-deck cameos. You have to wonder what kind of effect being number double-zero has on your self-esteem. Thanks to Bo for bringing this one to my attention. 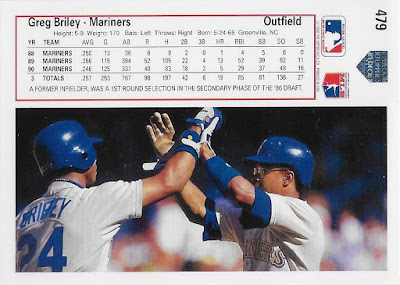 Yeah, I'm counting back-of-the-card cameos. They're just as rare if not rarer than your average cameo. The first of two Griffey cameos from '91 Upper Deck, this one features a great letterbox photo of the Kid congratulating Mr. Briley on his super sweet dad frames. 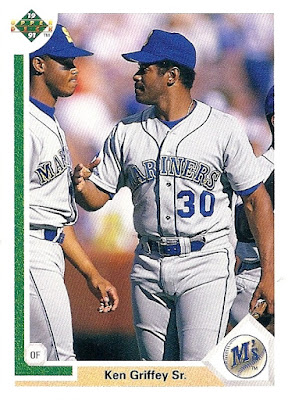 These two got on more than a few cards together during their short-lived simultaneous stint with the Mariners, but of all those, this is the only one we can call a cameo because it is Senior's true base card. 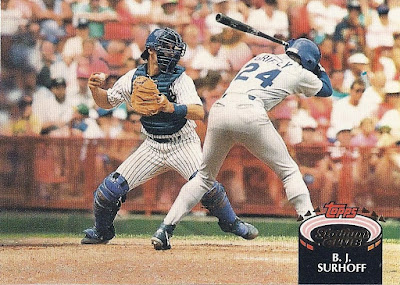 Here is the earliest example of my favorite kind of cameo, the canded action shot. With cards like these we can only wonder if Junior's presence in the shot influenced this photo getting chosen for the set. The biggest argument to that fact is that the photo used here could have been cropped vertically and all we'd have seen of the batter is a leg and a left butt cheek. Instead they went with the horizontal layout so we can all see exactly who was at the plate. Well done, Stadium Club. I like how Junior looks like he's about to smash the ground in anger with his trademark black bat when in reality he's probably avoiding the put-out throw to second. 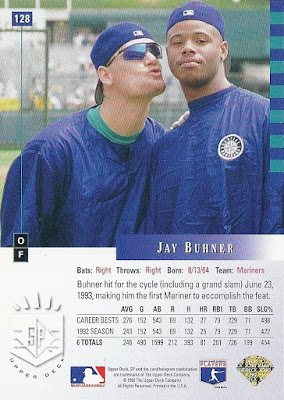 Another great cameo back. I like how Griffey is focused on the camera with a tough-guy non-smile and probably assuming Jay is doing the same thing while he is, in fact, doing the complete opposite: the platonic man-friend near-kiss. Classic buddy move. It usually takes a few beers before guys get to this level of clowning around. 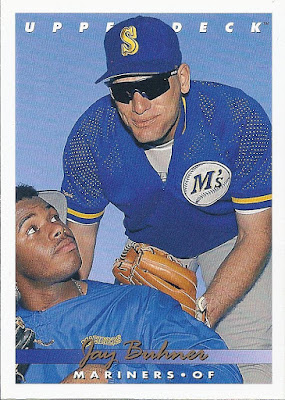 By the way, you're going to see a lot of Jay Buhner cards in this list. These guys were joined at the hip in Seattle. 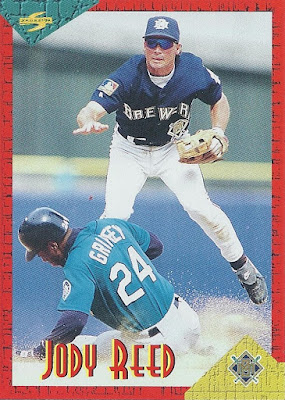 Double-play shots have given us some of the greatest cameos in cardboard history. Jody Reed is actually on this list twice as you will see, and both times he is putting Junior out at second. I suspect both photos are from the same play. 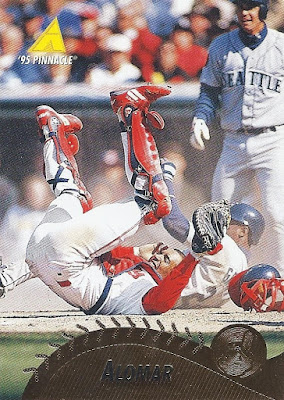 Another candid action shot, this one may be the first truly non-intentional Griffey cameo on this list. While that is unmistakeably Griffey on the ground there, he is hidden behind Alomar's mitt and obscured by dust following what must have been one heck of a collision at the plate. 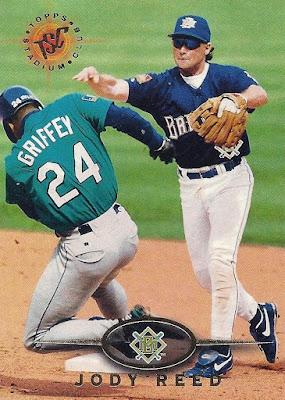 This is the first Griffey cameo I ever saw, and it was almost 20 years between when I discovered this card and when I finally owned one. Now, if you told me there was a second-baseman with two Griffey cameos in his cardboard history, I would expect it to be either Joey Cora or someone else in the AL West; but Mr. Reed is a Brewer, and he's not Joey Cora, either. That combined with the fact that every aspect of their uniforms is identical leads me to believe this is the same double play from the '94 Score Rookie & Traded card. If not, it's a hell of a coincidence. 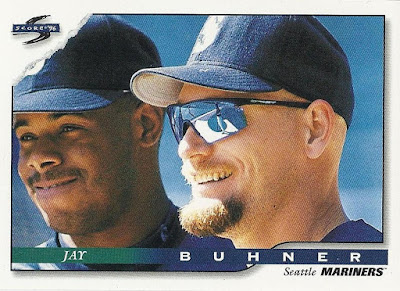 Again, probably intentional by Score - any excuse to get Junior on cards in the mid-90's - but this is a personal favorite among Junior/Buhner buddy shots. 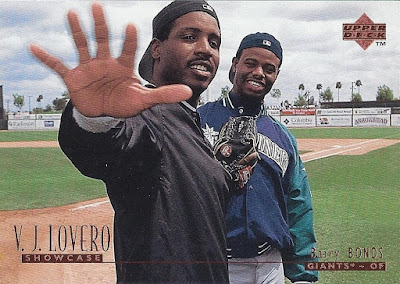 Inserts count all day long, and they're even pretty darn rare. Usually inserts are heavily focused on the one player, often going so far as to incorporate only the player silhouette with no photo background. This one, though, which focuses on great baseball photography from Upper Deck's first-string photographer, gave us a fun behind-the-scenes look at the pair of second-generation All-Stars. Check out the double backwards caps. 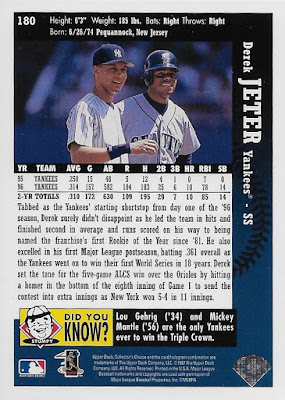 Another one from eagle-eye Bo, here is the Kid with next generation All-Star Derek Jeter. Nice to see everyone getting along, though the Mariners would be knocking the Yankees out of AL Chamionship contention only a short while after this was taken. Tough luck, Derek! 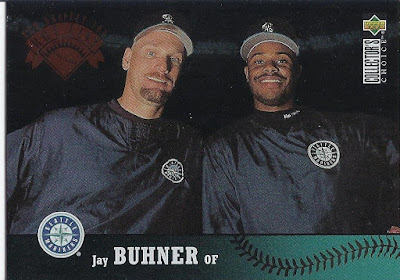 Are you sick of these two yet? Ugh, just get an apartment together already. I'm kidding, of course. I'm a huge fan of both these guys, and thanks to Wayne's World I understand that platonic love can exist between two grown men. 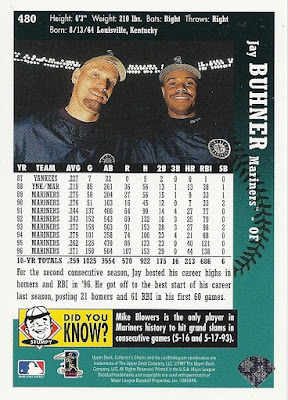 It's the same photo as the Hot List card above, but you can see the stadium lights a lot better here. 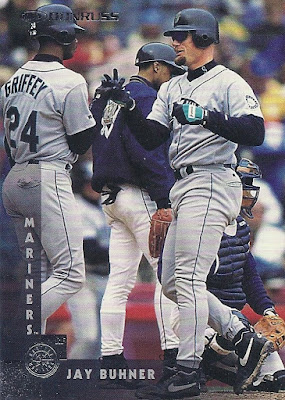 Gettin' it done on the field as they often did. This is the final Buhner card on this list though there are probably more I just haven't come across yet. The exact same photo was used on the 1997 Donruss Jay Buhner Team Set card #138 which I'm mentioning here because it is an entirely different set and not a parallel. 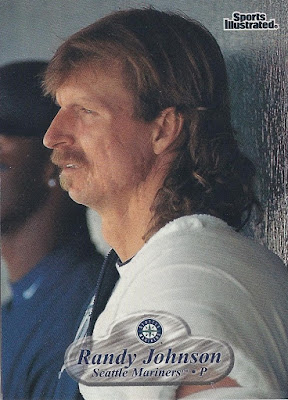 See that guy sitting next to Randy in the Nike turtleneck? That's our guy. There's no smoking gun I can point out here that removes all doubt, but come on. I mean, come on. 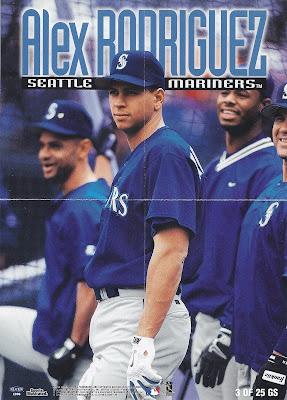 These mini-posters came one per pack in '98 SI Then & Now, so I have no qualms including this one on the official list. This poster also gives us two bonus cameos: Edgar Martinez and Joey Cora. 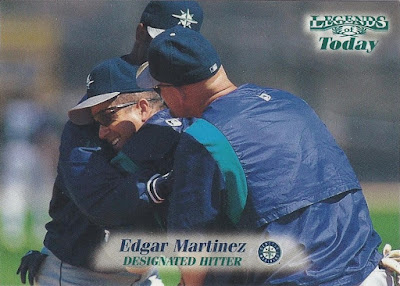 We can't see his face here, but that's Junior being hugged by Edgar Martinez. I like to think I've seen enough Griffey ears on baseball cards to recognize them in a man-hug situation. 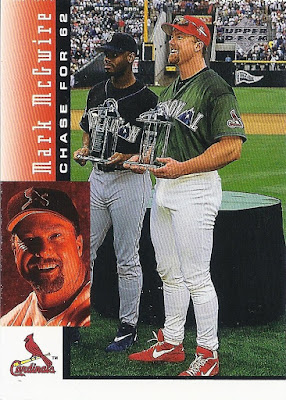 In 1998 McGwire got his own set of cards called "Chase for 62." Pictured here are both top vote-getters for the 1998 All-Star game. Can you guess which one is going to be inducted to the Hall of Fame first? 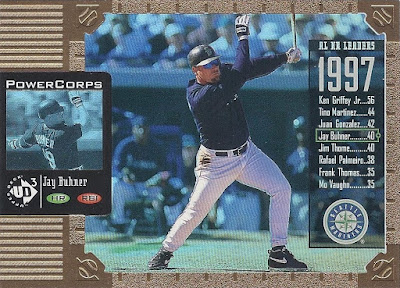 See the guy sitting down outside the dugout to the left? That's Junior. See the backwards cap? The shape of the face? The concern for his friend's performance at the plate? It's definitely him. I'll be honest - I had this one listed below in the "unconfirmed" list for a while. Now, after multiple viewings, I have very little doubt.﻿ 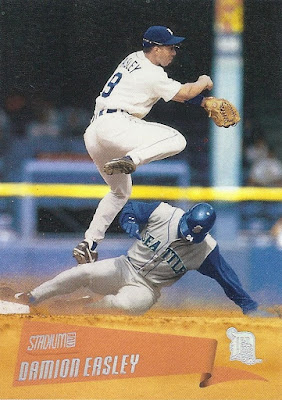 Another excellent double play shot. I would call this one unconfirmed were it not for the handy numbering on the brim of Junior's helmet. Stadium Club knows their action shots. 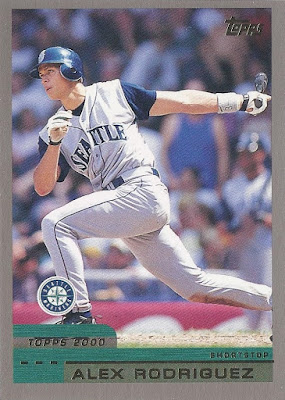 This very well may be the last Griffey cameo on a Mariners card. We can see Junior on deck in the background. He's a little blurry, but that's definitely him, holding his bat like a lefty. Unfortunately, blue tank top in the crowd there has a better view of Griffey than we do. 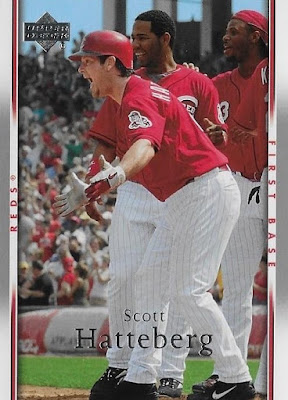 One of the stars of Moneyball, first baseman Scott Hatteberg, ended up playing in Cincy for a stint after his historic time with Oakland. Whatever is going on in his picture, I want in. I like to think the Reds are up by like 20 runs and it's all a big joke at this point, hence the smiles, backwards cap, and general wilding out. He frickin' SAFE, ump! C'mon we're up by 20 - does it really matter? Just let it go! 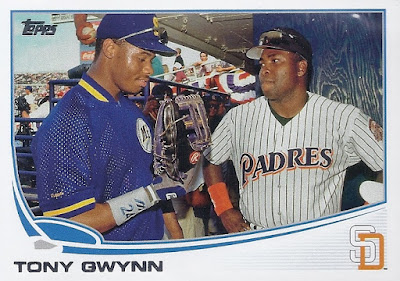 One of the pricier Griffey cameos you can get (if you can find one), this *S*SP from 2013 Topps Update is offically a Tony Gwynn card; but I really think it could go either way. A stirring candid shot of a young star hanging out with a seasoned veteran. I wish all SP's were this cool. 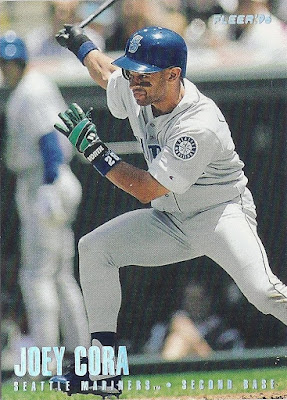 Based on what I know about the mid-90's Mariners batting order, it is entirely plausible that that blurry silhouette in the background is another on-deck Junior. A-Rod would eventually take Cora's spot as second in the order; but this picture was likely taken in 1995, well before A-Rod had proven himself. Then again I don't remember Junior in white batting gloves, so I could be totally wrong here. The unconfirmed-iest. 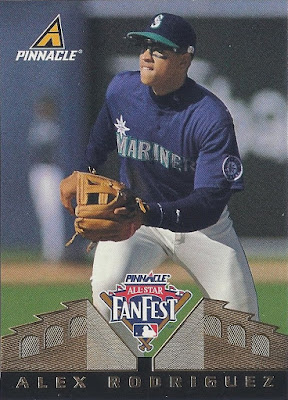 The blurry guy in the background might be Junior, assuming A-rod is in his regular place near second base. This one is pretty much impossible to prove, but I think it's way more likely than the '96 Fleer Joey Cora shown above. Way unconfirmed. 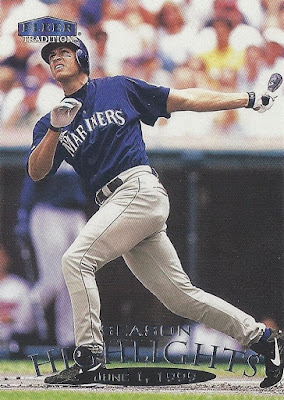 The on-deck batter in the background here is probably Junior. If you look at the typical batting order of the late-90's Mariners, it was usually A-rod second and Junior third. No, I can't quite prove this one, so here it sits in the unconfirmed section. 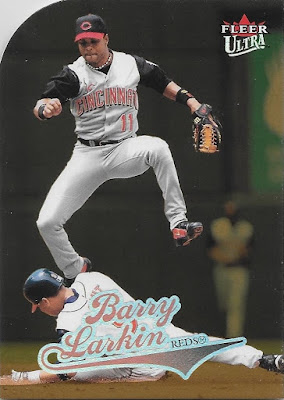 I spot a Griffey run in the background here. I can;t be sure because there were a few injuries here and there in Cincy for the Kid, but that looks like his run. Still, not 100% on this one. 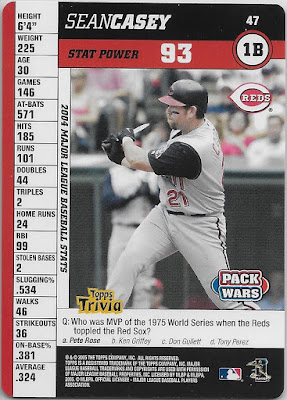 Yes, Junior hit after Casey in the batting order more than a few times. Your boy on deck is shouldering his bat like a lefty, and that really looks like a 3 on his uniform. I feel pretty good about this one, but the doubt is there. Unconfirmed-alicious.


Thanks for reading, and keep your eyes open...
Posted by The Junior Junkie at 1:23 PM