I really enjoy group breaks, and those done by Chris at Nachos Grande tend to be some of the best.  Results are spread out in spurts over several posts and the cards are shipped lighting-fast.

Recently he had an "affordable group break" that featured several high-end boxes from the 90's.  I sniffled some tears back when I realized that for the first time since I started collecting again, the Mariners were already taken (!!!!), but far be it from me to miss one of these awesome breaks.  I took the Braves because there are a lot of guys I collect from that time period I figured I'd probably land cards for including Javy Lopez, Maddux, Glavine, and Chipper.  Got some pretty solid stuff, too, including one excellent Maddux hit: 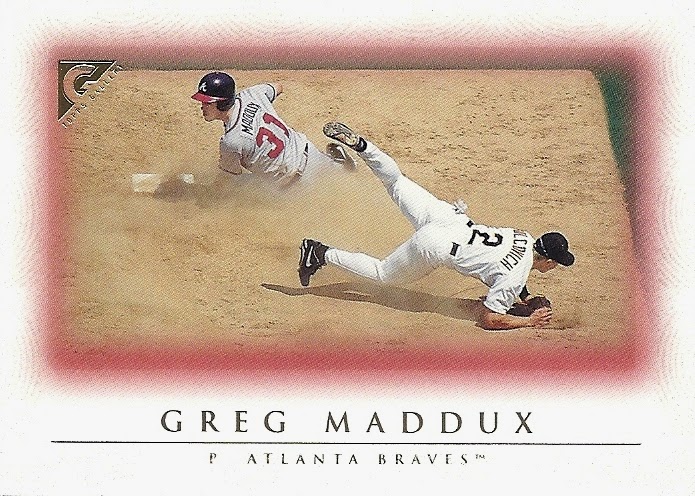 We're starting strong with what is arguably my favorite card from my end of the break.  Check out this gorgeous shot of Greg freakin' Maddux stealing second.  Topps Gallery had some extremely strong photography this year.  If I get another one of these I'll send it to Dime Box Nick as he collects pitchers on offense, but this one is mine.  Oh, and this is not the excellent Maddux hit I was talking about. 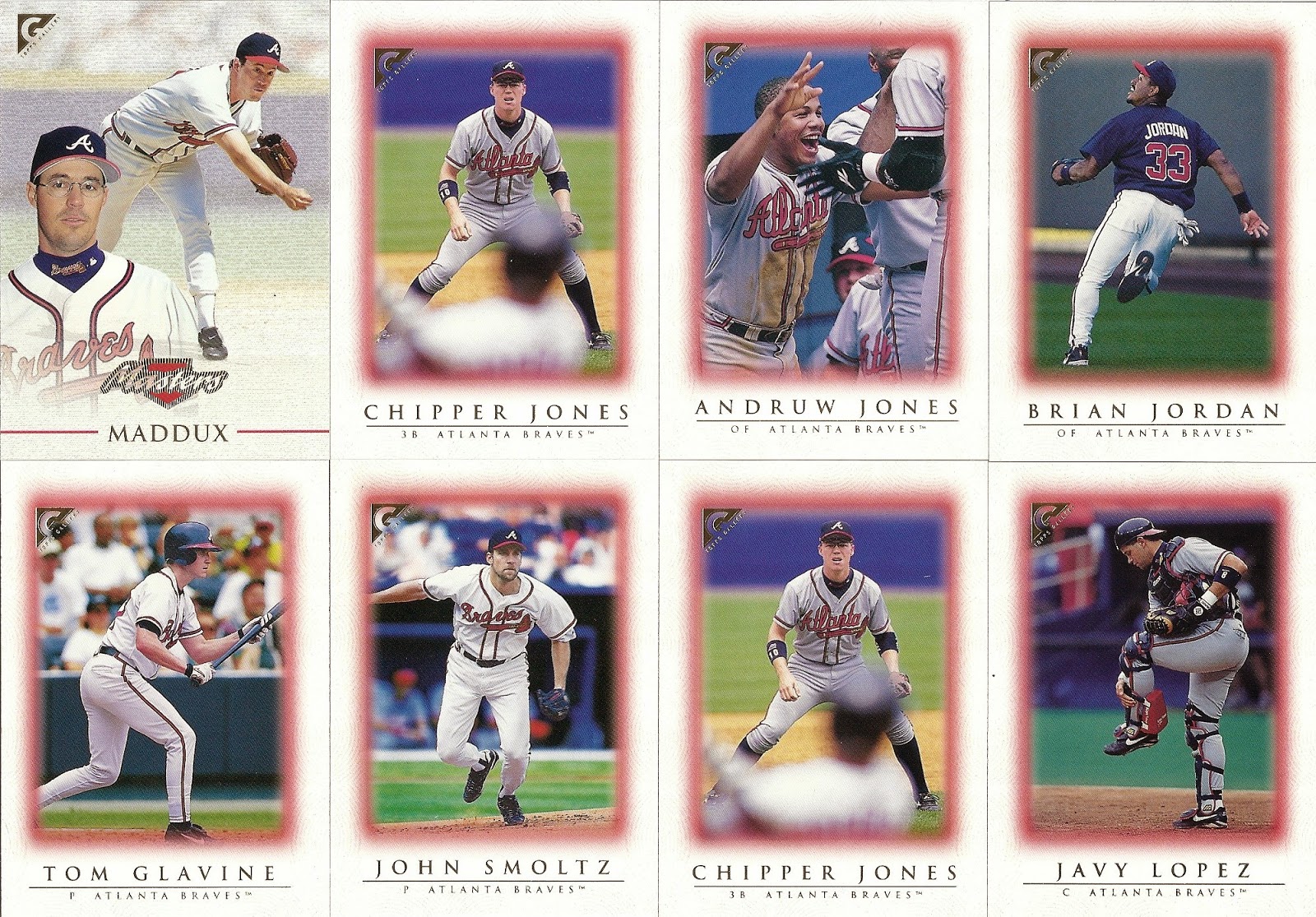 That Chipper is so nice I showed it twice.  Plus we get one of Glavine at the plate and a Mad Dog insert.  What a great set.  Nice choice, Chris. 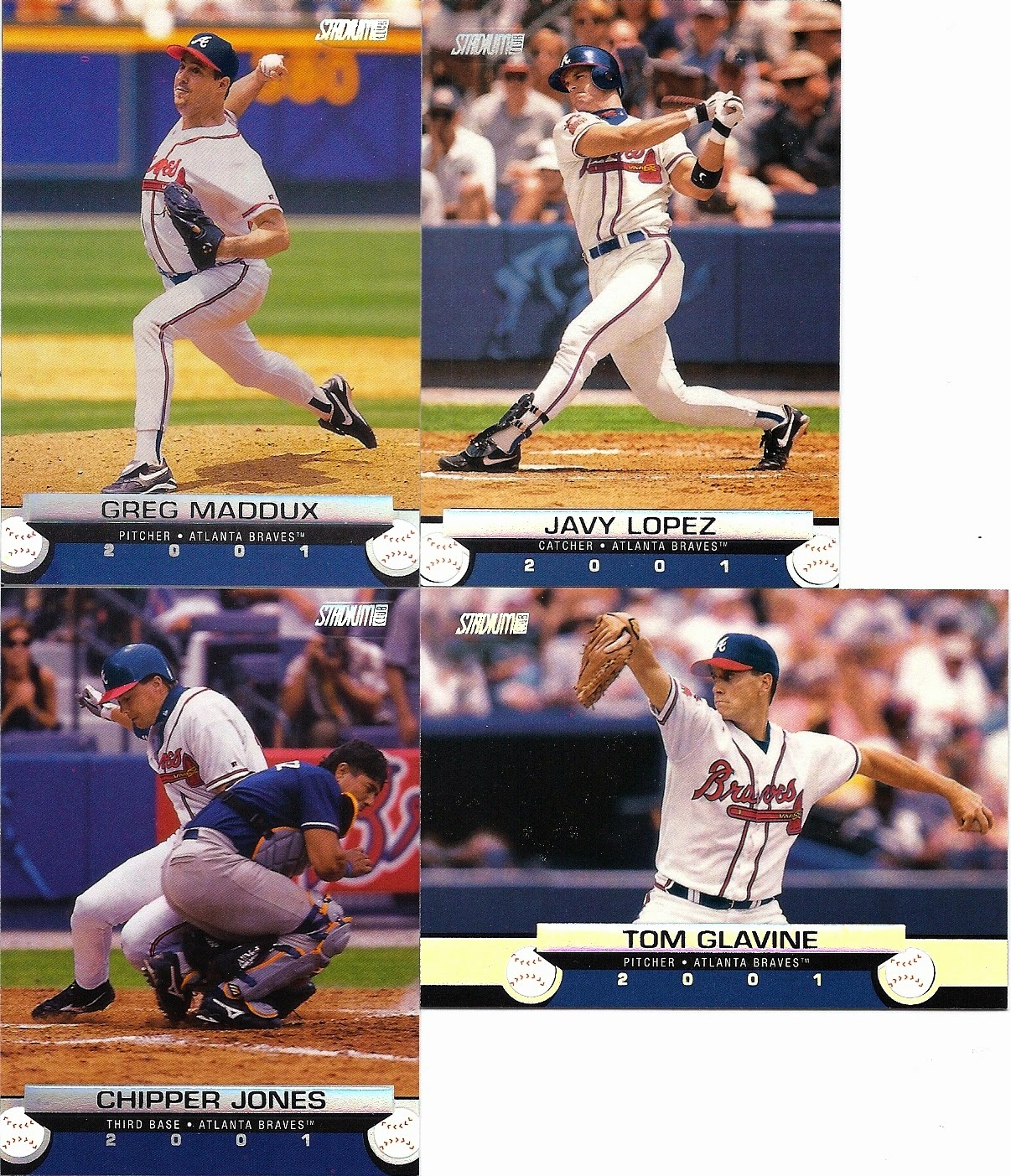 Did Chipper punch that dude in the gut trying to get home?  Larry is vicious. 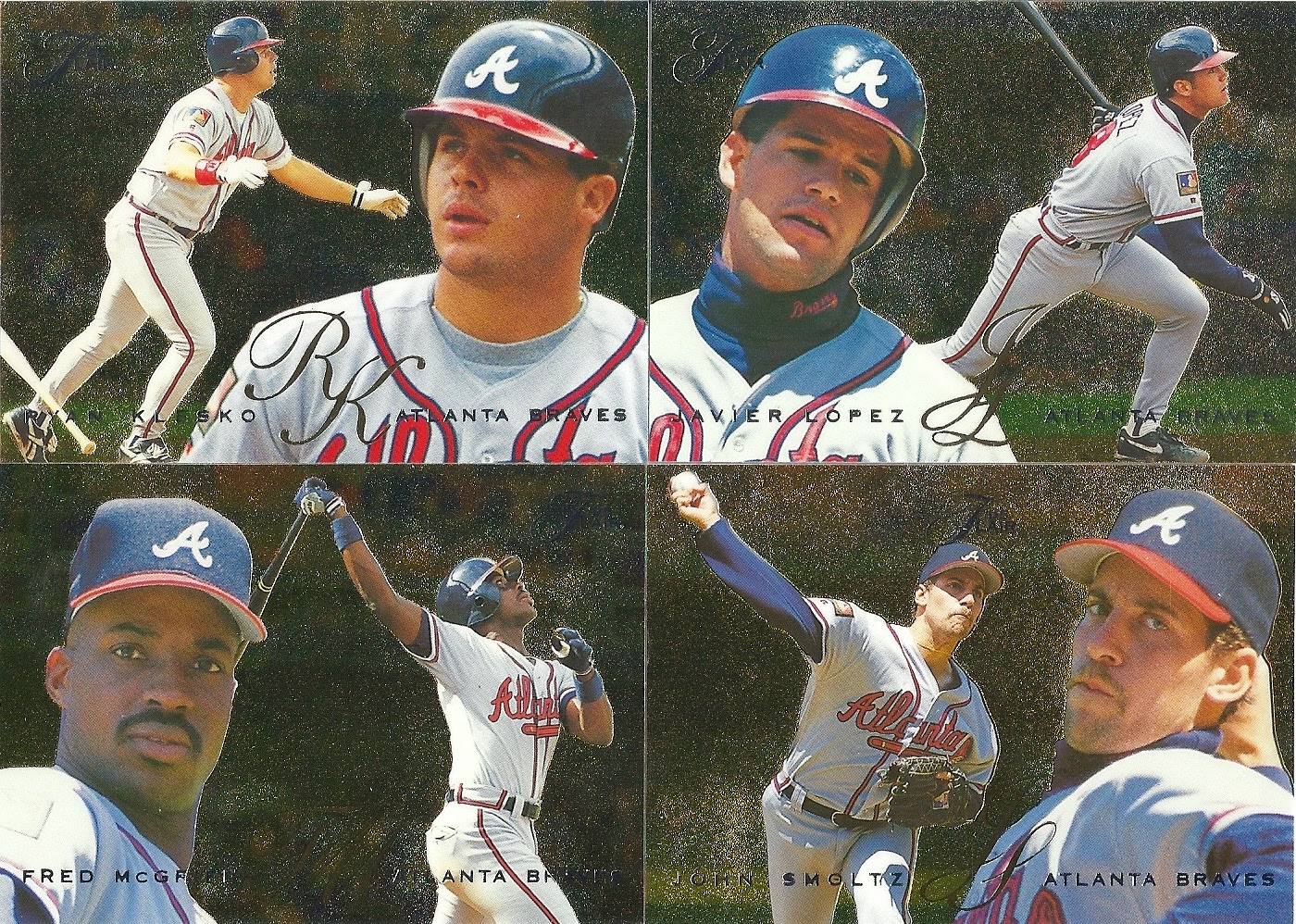 This was a strange year design-wise for Flair, but the cards are nice.  This is one of the only Crime Dog's I ended up getting which surprised me.  I really dig that Javy. 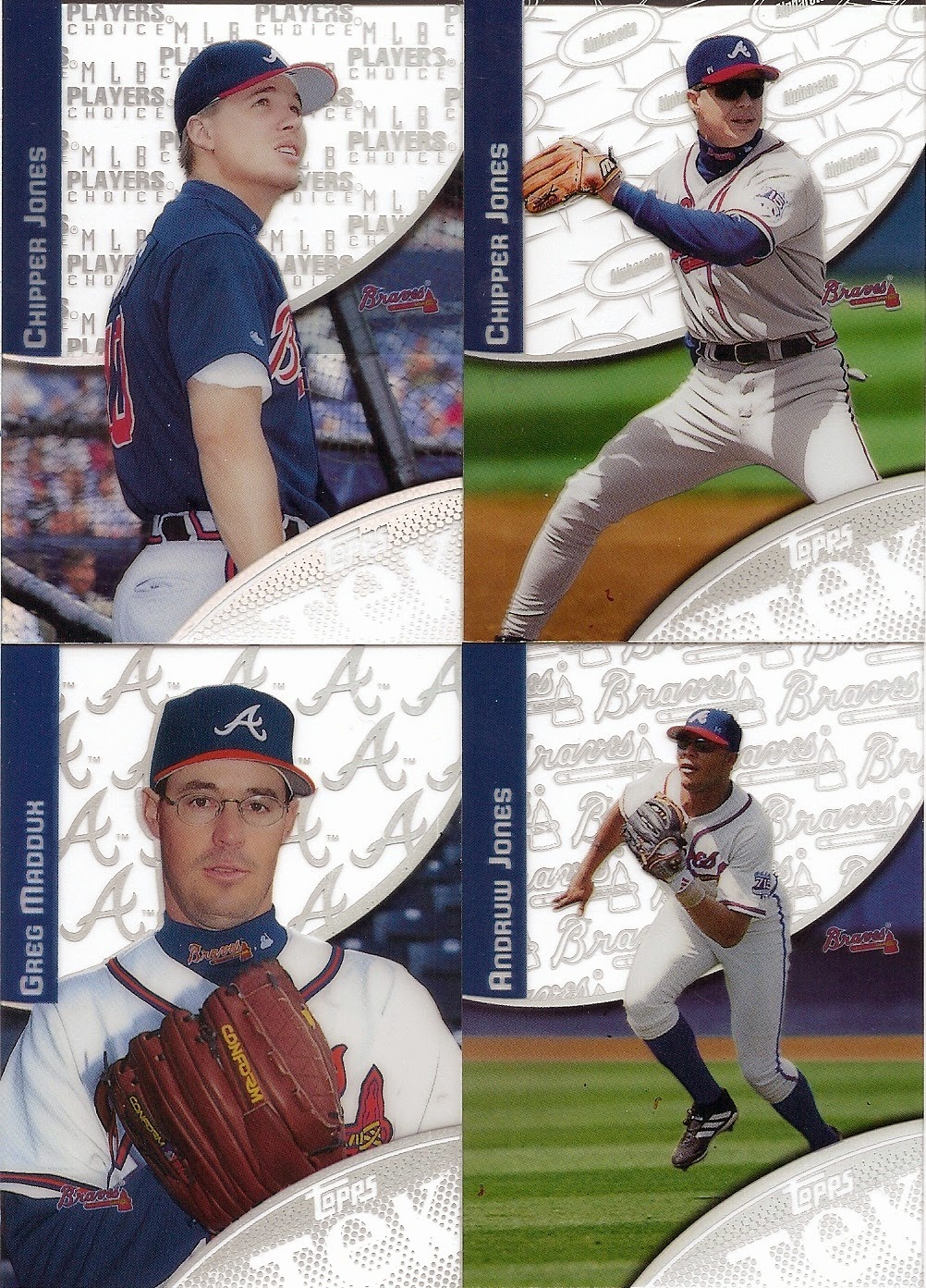 Gotta love Topps Tek, unless of course you're trying to complete the set in which case you probably hate Topps Tek.  I love portraits of Maddux - the guy looks like an accountant, but he's a highly-respected athlete.  It's crazy. 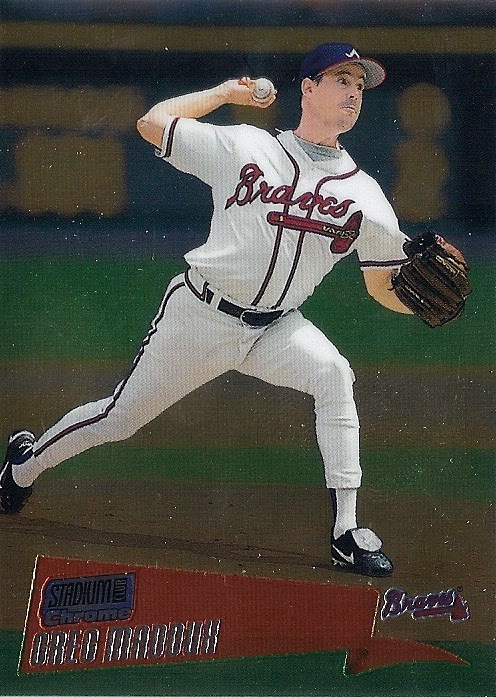 I didn't get many SC Chrome cards as there aren't many per box, but a Hall of Famer isn't bad.  I think he'd switched to contacts by this point. 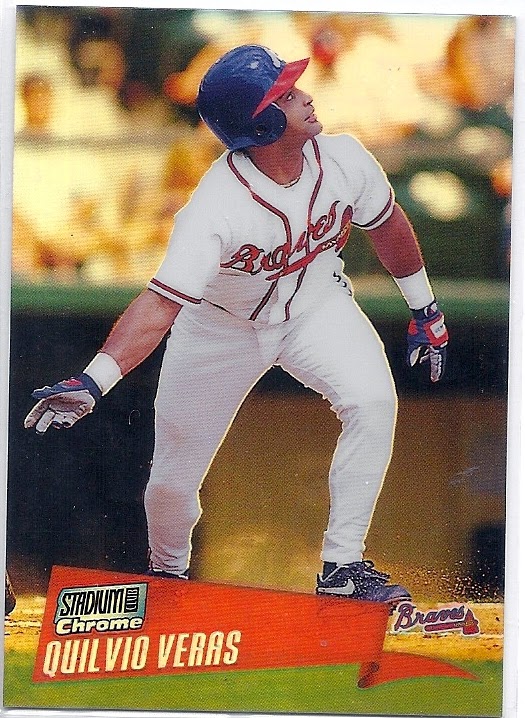 This was my hit from that box, a refractor of second-base guy Quilvio Veras, fresh from the Padres.  He was first in the league in Range Factor in the 1999 season.  I don't know what that means. 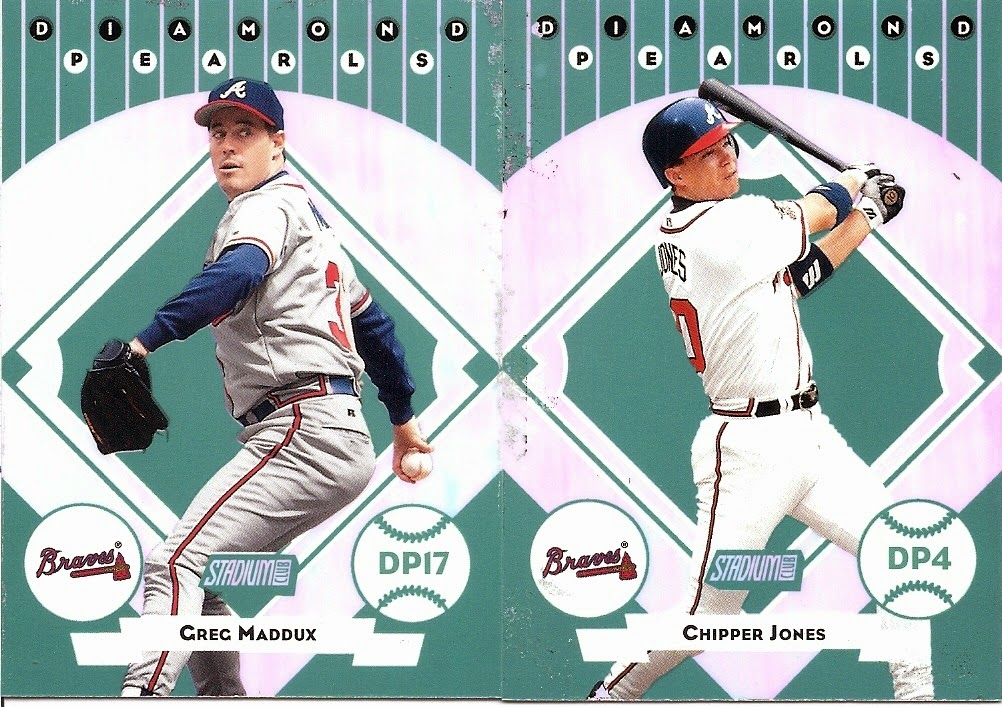 Diamond Pearls is an really cool insert that is difficult to find in good condition.  I have the Griffey and it has the same damage these have.  Must have been something to do with the pearlescent coating.  Still, they're great-looking cards. 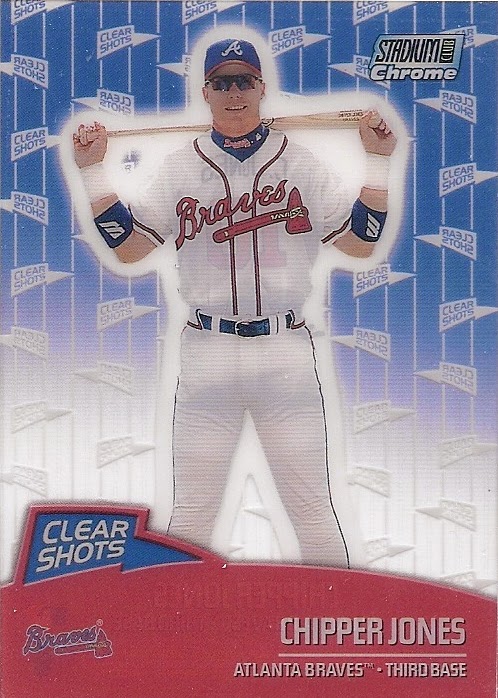 A sweet clear insert from the Topps Tek box.  Nice shot of Chipper. 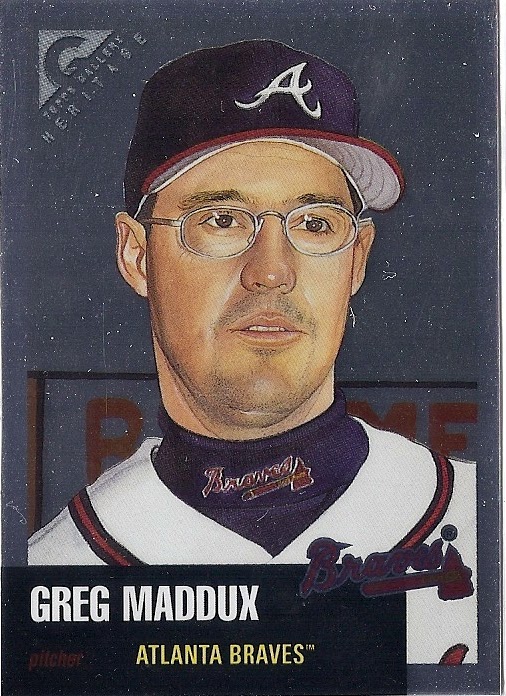 This is my most valuable hit I got, a very rare Heritage Proof insert from the Gallery box.  I love the backs of these: 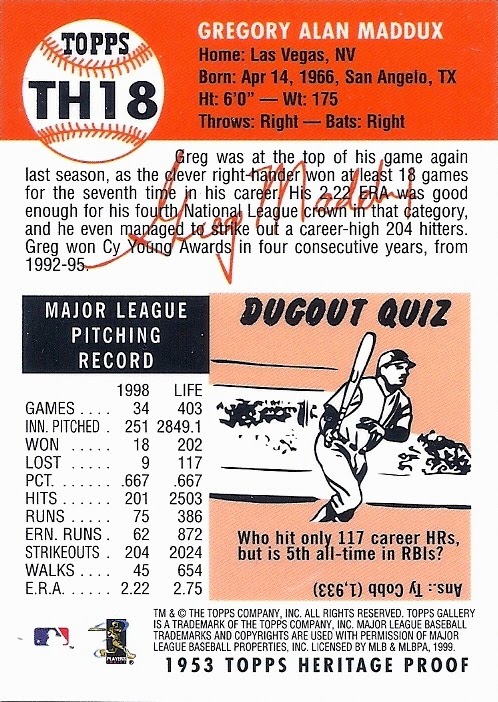 Finally, Chris included a few of these guys mixed in with my booty: 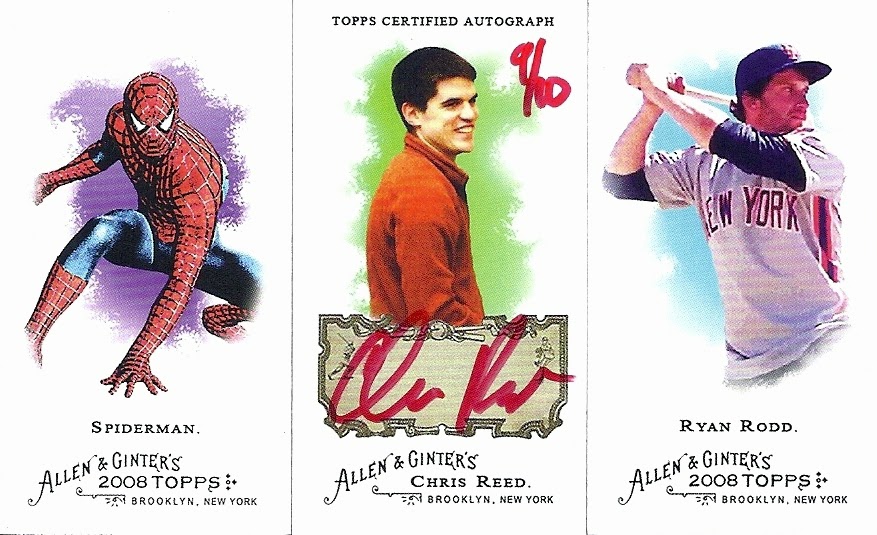 That is the signed and hand-numbered Chris Reed card from his buddy's homemade set.  Only ten of these - I feel special!  The Spiderman is also pretty damn cool, but the auto from Mr. Nachos Grande himself takes the cake here.  Someday card bloggers will be just as famous as the players we love, and this card with be worth dozens of dollars.

Thanks for the group break, Chris, as well as the cool custom cards.  Your auto is going in my keeper box...
Posted by The Junior Junkie at 10:43 PM