This is the final post in a three-part series all about 1995 Upper Deck.


At long last, let's look at some Griffeys: 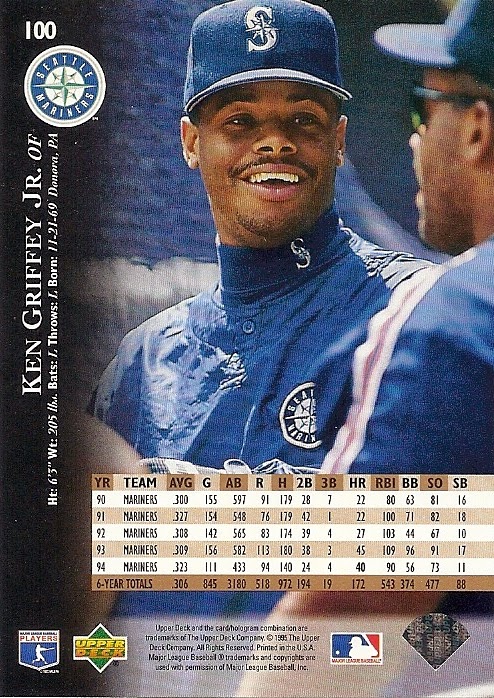 I talk at length about why I love this card in part one.  Suffice it to say, yeah, it's pretty good.

There are two parallels of this card, Electric Diamond Gold (1:35 retail packs) and Silver (1:1 retail packs).  I only have the silver, and here it is:


The only difference is the color of the foil and the little home plate Upper Deck logo with the parallel name.  Not much to it, really, so I'm not hurting for the gold version. 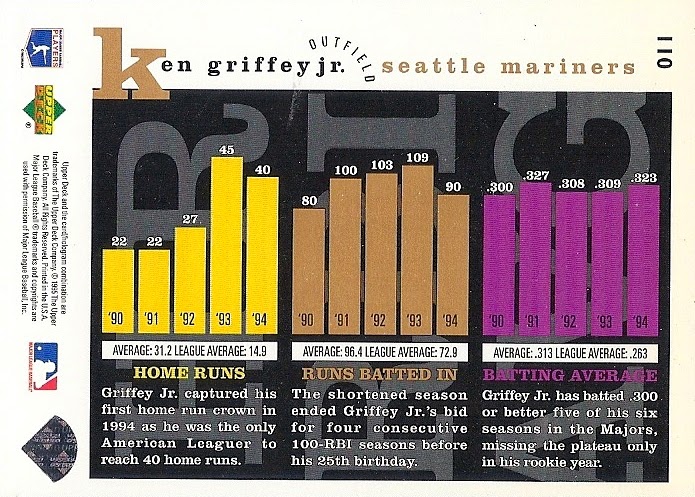 I turned this on its side so you can get the full effect.  Our guy is above-average in every category here.  Can I get a "what, what?"

I have both parallels of this one:


Electric Diamond was the 1:1 retail parallel.  Let's look at the 1:1 hobby box insert: 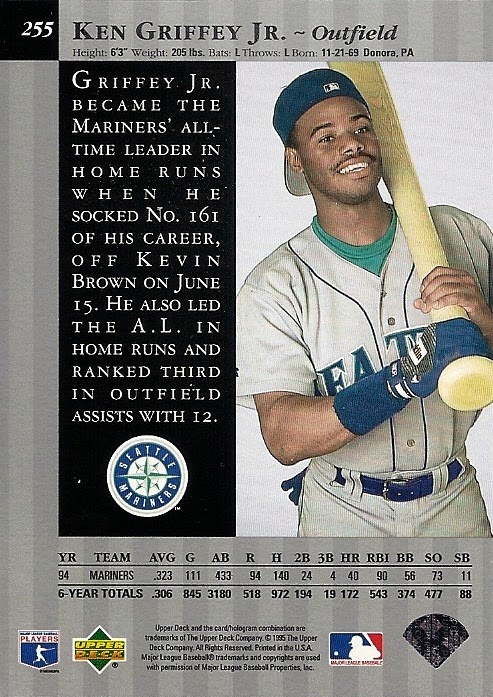 This has all the qualities of a parallel, but it's not.  It's really just a massive insert.  While I'm not crazy about the unscannable front, I love the back here.  That oversized bat sure has made the rounds on cardboard, hasn't it? 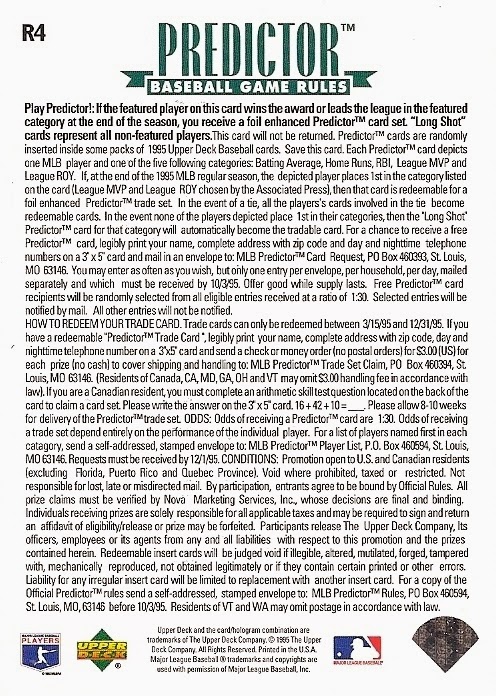 Before we talk about this card, let's take another look at the boxes: 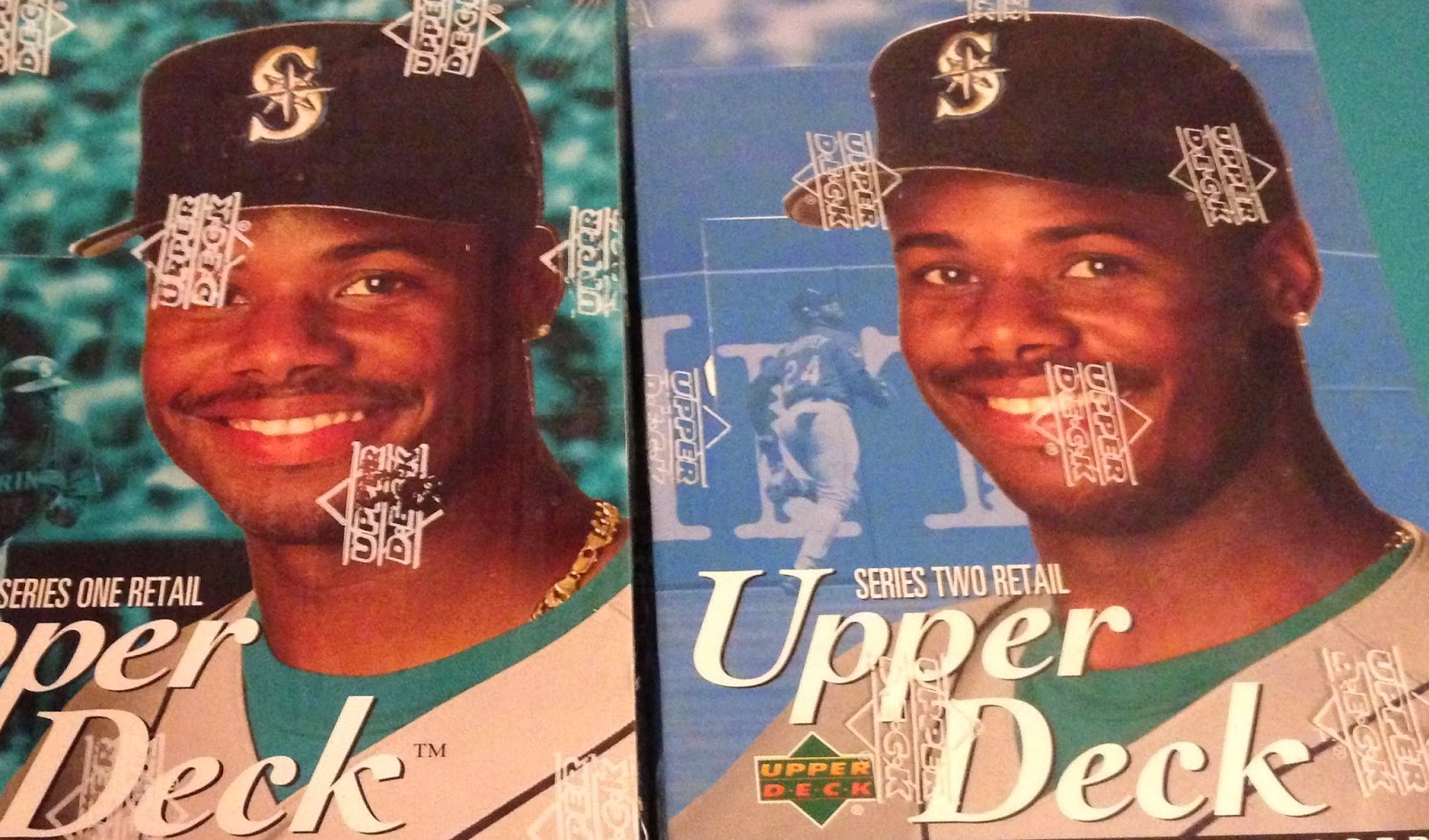 These are clearly all taken from the same photo session.  And why not?  It's a great portrait and made for one of my favorite Griffey cards of all time.  A great-looking design with a classy marble border.  These cards look expensive.

I won't sit here and type how the Predictor cards worked.  Suffice it to say there were no winning Griffeys this year. 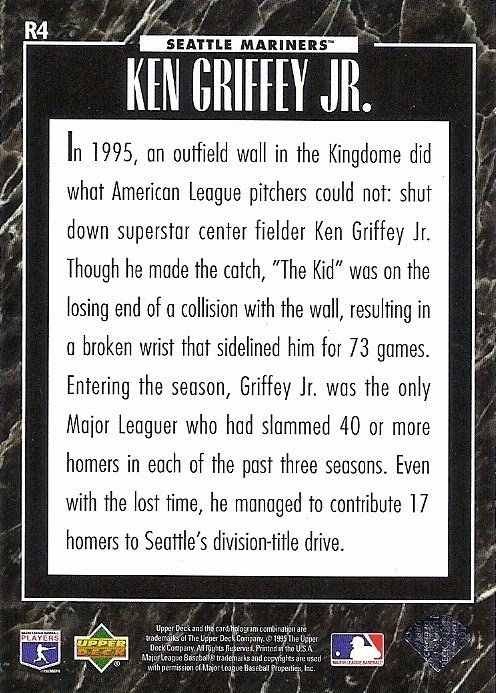 This redemption card for the series two first-set Predictor is one of the few that adorn the background of this very blog.  As you can see the design was identical to the game card but with holofoil instead of bronze.  It's also got a proper back instead of game rules.  The blurb is bittersweet. 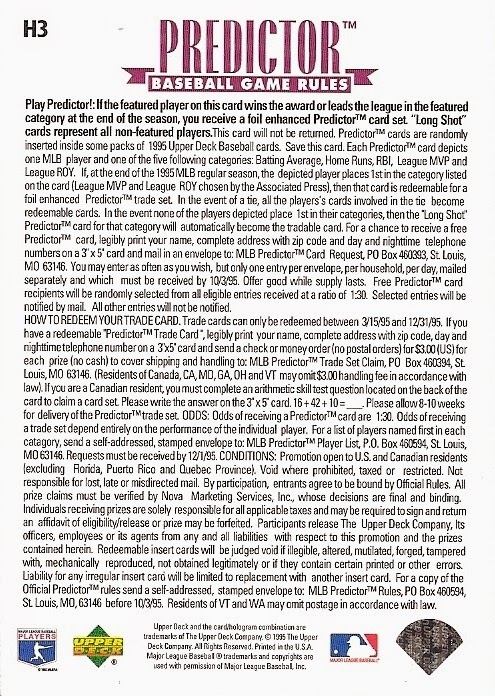 This is the series one hobby box version Predictor.  It's red instead of green and features an action shot in lieu of a portrait.  Not as iconic as the sharp portrait cards but still very much a looker. 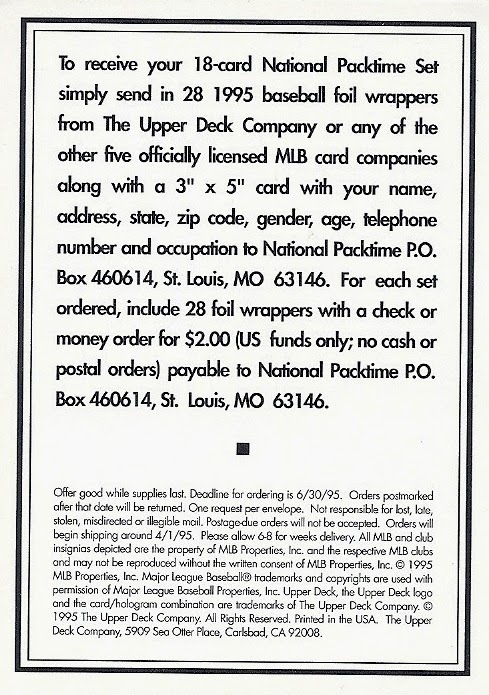 I don't count these as Griffeys per se, but I do keep a couple in the binders next to the National Packtime redemption cards.  It's got the Kid's name on it - that's good enough for me.

There was also a Griffey in the Upper Deck Minors set from this year: 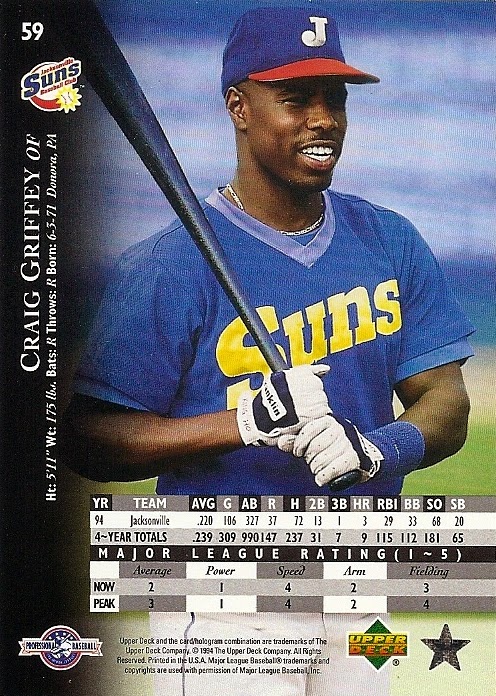 Craig is just a little younger than Junior, but his major league career never really panned out.  We still got a very small number of cards for him including a very nice family portrait card in '92 Upper Deck and this card depicting Craig laying down a savage bunt.  Again, I don't count this in the Griffey totals, but it belongs in the binders.

Here are the Griffeys I need from 1995 Upper Deck:

Those last two Redemption cards listed are going to be tough to pin down as there was only one winning card in that entire half of the Predictor checklist.

So that's everything.  I've got a few more scans of some side-by-side comparisons among parallels for you to enjoy if you're so inclined, but when it comes to 1995 Upper Deck posts, I'm spent.

Have a great week.