September is the Finest month here at The Junior Junkie. I’m going to be posting about the legendary first four Topps Finest sets in the timeline culminating with the original bastard of 90’s super-premium, the 1993 set. There will be many adjectives, much Chromium, and refractors refractors refractors. 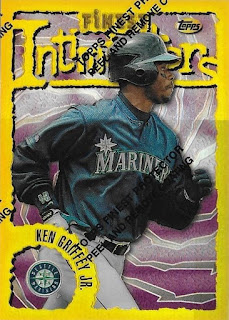 Finest refractors are freakin’ all over the place these days. They come in every color of the rainbow (plus a few new ones), and serial-numbered from the many hundreds all the way down to 1. But it wasn’t always like that. From ’93 to ’95 there was only the one base card and its one refractor and that was it. It was both elegant and infuriating because you either had the cards or you didn’t. Simple. Easy. A little brutal.

In ‘96 we got the first inklings of just how complicated sets could get, and Finest wasn’t immune. Suddenly there were three refractors to worry about, and that number would only climb as the years would go on.

I would say ’96 Finest gave us the first tiered refractors, but that is not really the case because it was the base cards themselves that were tiered – not the refractors. These are certainly the first gold refractors (bronze, too, I suppose, but who cares about those?).

They gave us a checklist comprised of tiered subsets with each player appearing on up to three base cards, some of which were tough pulls even by Finest standards. In fact, 91 of the 359-card base set (about 25%) were seeded at 1:4. 48 of them (13%) fell only one per box, meaning you had to bust a minimum of FOUR CASES to have a shot at the full base set. These are BASE cards. Set builders must have been plotzing.

The base set is complicated by just about any standard. Each subset, those being Gamers, Additions, Intimidators, Franchises, Sterling, Prodigies, and Phenoms, had its own insert-quality design. They were also printed in varying colored tiers of either bronze, silver (1:4), or gold (1:24) with each card only appearing on one of the three colors. For example Mike Piazza’s Sterling subset card is silver, but there are no bronze or gold versions, nor are any of his other cards also silver. There are other players with Sterling cards in bronze or gold, but nobody has more than one colorway of a given subset.

Now don’t quote me on this, but I suspect this bronze/silver/gold thing might have something to do with the ‘96 Summer Olympic games in Atlanta. Everybody was Olympics-crazy this particular summer with them being stateside and all, so I’m guessing there was at least some influence at play there.

Topps claimed there were only 150 of each gold refractor, but without going too much into detail I’ll just go ahead and tell you that there are definitely more than that. Trust me.

There are other caveats at work here, but we are only going to talk about the Griffeys today.


Junior’s defacto base card is his Sterling subset card which is both first numerically and the most common by a mile. Each subset has a theme: Additions for rookies, Phenoms for young stars, and so on. The theme of the Sterling subset appears to be just guys who are good at baseball. Not as fun as some of the others.

I've always been smitten with the background on these which is enhanced by the Chromium. That is the very same pattern you find in the pressed copper ceilings of bars with dress codes who sell Lagavulin for $40 an ounce (don't even ask about the Pappy). Oh, and that name banner is one of the greatest of the modern era. This one's got a real Great Gatsby vibe to it. 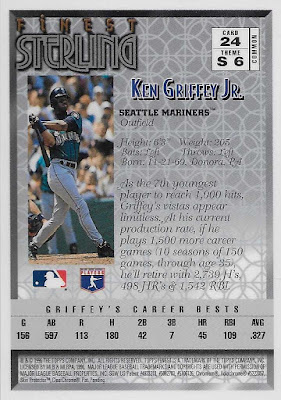 The stat box showing just the career best stats is certainly unique, but the card numbers here tell us everything. 24th in the set at large, 6th Sterling card, and "common" which you can go ahead and read as "bronze."


And of course it looks even better as a refractor. Again these were seeded at 1:12 which meant you were all but assured at least two refractors in each box. God bless you double-bronze-refractor pullers. You're the salt of the Earth. 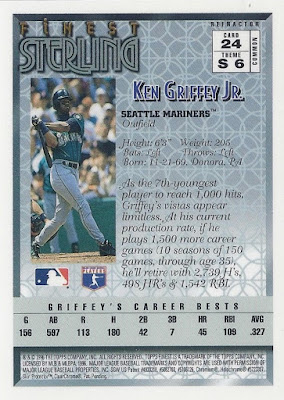 You'll notice eBay sellers hawking earlier base cards they mistake for refractors (because they're shiny, I guess?), but after '96 they were truly idiot proof as the indicator was right by the number. 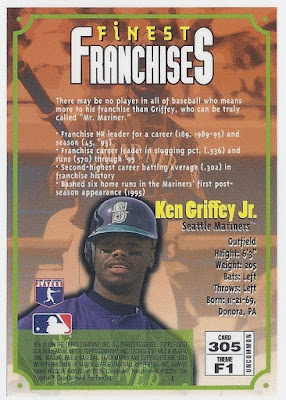 The Franchises subset focuses on each player’s performance in relation to their respective team. Check out the back which touts just a small part of Junior’s total domination of the Seattle history books. 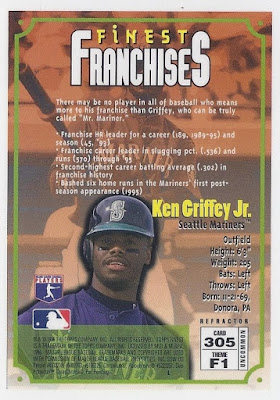 Ladies and gentlemen, the first gold refractor. OK, so I don’t have the regular base card of this one and honestly I don’t even want it. I’ve got my lil’ refractor boi and that is plenty enough for me. I almost didn’t show the regular cards at all when putting together this post because they don’t scan well, and who really cares when there are refractors to be had? 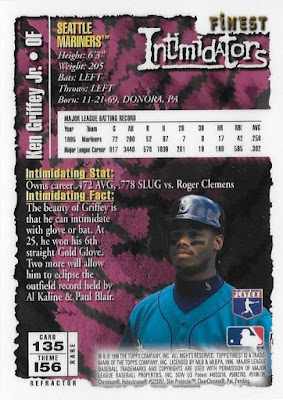 The theme of the Intimidators subset is guys who are scary, specifically baseball-scary. In Griffey’s case, pitchers and anyone with plans to hit into the outfield. That’s pretty much most of the guys on the other team.

This particular Griffey fell at 1:13,824 packs. I would love to see some production figures here, but there are almost certainly more than 220 copies to be had. That number approaches the quantity of 1993 Finest Refractors of which there are allegedly 241 per player. This is not likely the rarest Junior refractor, but that speaks to the reams of silver and bronze refractors there must be out there.

That being said, refractors or bust, son. Base don’t count for squat. I can get away with such utter disregard for non-refractors here because I have all three. My tune will almost certainly change when I do a write-up of next year’s Finest set which has a little insert known as “The Man.” I’ll try and show a little humility then. In the meantime… 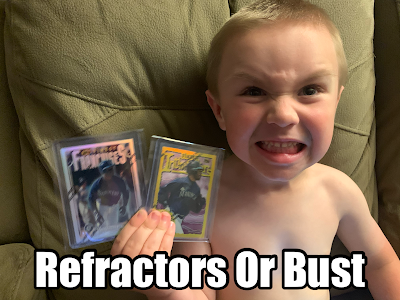 Here are the Griffeys I still need from 1996 Finest:

But seriously I can live without it. Refractorzzzzzzzzzzzz
There's one more "1996 Finest" Griffey you need to finish this one off, and it's kind of a mystery:
The back is semi-gloss white paper not unlike a sticker, hence the "blank" part of the name. There are blank back versions of similar designs across all sports this year as well as "Landmark" and "League Leaders" baseball designs. This Griffey often has the words "bronze" and "League Leaders" attached to it, but I believe that's just because no one knows what to call it; and being that there is a mostly-bronze League Leaders card for Randy Johnson among these blank backs, those words have been erroneously ascribed to all of them.
I would say they are prototypes or executive proofs, but there are so many - like hundreds if not thousands judging by market prices. My best guess is that they were promos for the 1996 Finest designs, but a major design shift to the the multi-subset theme left them out in the cold. Affordable and easy to track down - go get 'em.
That pretty much does it, but I would be remiss not to mention the funniest (but also cruelest) thing about this 1996 Finest.

The distribution of which card got printed in which color appears to have been more or less random; and as it happened, the series 1 checklist card ended up being one of the super rare golds. And yes, the checklists did get the refractor treatment. This means that there are people out there who pulled a case hit….checklist. How’d you like to drop a mortgage payment on a case of these and pull a checklist as your case-hit gold refractor?

That was the funny part. Here’s the cruel part: how would you like to be a kid who saved up all his lawn-cutting and paper delivery money for weeks to buy a whole box of Finest, be lucky enough to get the box with the gold refractor….and….well you know the rest. Hey, imagine pulling it in the first pack, then having to rip through all the rest of those packs just friggin' sobbing. If I was that poor kid’s dad I would rage-shit a chicken.
Posted by The Junior Junkie at 8:30 AM