Batman and Robin and 1991 Donruss 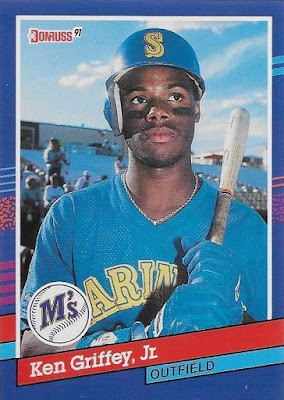 You've got to admit that first Tim Burton Batman movie was pretty solid. A couple years later Batman Returns (also Burton) came out, and despite being considerably sillier than its predecessor, I can remember thinking, "Yeah - they've still got it." Batman Forever after that is where the franchise really started pushing that silliness envelope, but I still enjoyed it. I mean, it was watchable, and that soundtrack was poppin'.

Then Batman & Robin comes along with the suit nipples and cheesy....well, you name it, and RUINS EVERYTHING. We didn't see another Batman movie for a long time, and when we did it was all serious and real-world and.....totally amazing. Lessons had been learned, and like it or not, we can thank Batman & Robin for that.

And we can thank 1991 Donruss for being bad enough that it actually saved Donruss designs for years to come.

We have to look at certain sets (especially the bad ones) in the context of their respective timelines, and in that sense 1991 Donruss came at the end of an era. By 1992 a switch had been flipped and Donruss cards got really nice. High-quality white paper stock, neatly-assembled card backs, great photography, and an overall “adultier” aesthetic. We also started seeing inserts for the first time including ramped-up Diamond Kings and the legendary serial numbered Elite Series insert. 1992 was the year Donruss’ voice changed and its armpits started crying stinky tears.

Back in 1991, however, Donruss was still playing with Micro Machines, throwing mud at girls, and sneaking Transformers into church. It’s that time in everyone’s life just before they stop liking Animaniacs and start pretending to not like Animaniacs. We are at the tail end of Donruss’ innocence.

Bright colors, full-bleed printing, and garish design defined the closing years of adolescent Donruss. The late 80’s saw a lot of monochromatic designs from the brand (with the exception of the ’89 set with its excellent rainbow effect), culminating in the blue borders of 1991. This devotion to one color stuck around somewhat in the form of light blue top and bottom borders in the ’92 set, but let’s face it: there’s the “oh, that’s a nice tasteful touch of blue, isn’t it?” type of blue as in the ’92 set, and then there’s a color of sufficient wavelength that your eyes boil in their sockets a la that Nazi guy in Raiders of the Lost Ark that can only be classified as BBBLLLLUUUEEEEEEE. That would be ’91.

I’ve tip-toed around this long enough, so here goes: 1991 Donruss is ugly. I don’t want it to be ugly - I love Donruss – but it is. Even the 1990 set has found a soft spot in my heart that my eyes have been fighting against for years, but the ’91 set is hopeless. It’s that thing of putting bright primary colors on something normally boring or tedious for kids so they will like it. In that sense 1991 Donruss has a lot in common with a Paw Patrol toothbrush or a Phineas and Ferb alarm clock.

On top of that there’s just not a lot of redeeming qualities here. It’s the same old card back (which is actually my favorite part) and photography that is mediocre at best. I honestly believe this set is the reason so many people hate ’92 Donruss. They’re back-to-back in the timeline so everyone lumps them together when in fact a huge culture change occurred somewhere in between, and ’92 is the far superior set of cards.


As you can see it looks like it should have a Hot Wheels car attached to it. The nameplate is a slightly-angled stripe of fire engine red with a yellow bit showing the position. They broke up the stark blueness of the borders with multi-colored stripes and stippling that follow the angle of the nameplate. It’s the cardboard equivalent of a carnival ride. Not a fun one – one of those safe, one-ticket kiddie ones that just goes in a circle.

I’d like to say the photos make up for everything, but overall they really don’t. They are just vanilla pictures of baseball happening. There are a few exceptions, but not enough to make this a tantalizing set build. 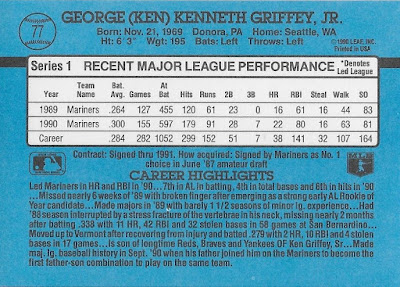 The back is the same one we’ve gotten from Donruss for a decade: stat box, career highlights, and the full legal name of the player. I can’t really complain about this design because they obviously heard whoever did and gave us a streamlined, modern card back the very next year. Plus I don’t really mind the old Donruss card backs because I am aging and things from my childhood, regardless of how terrible and inferior they actually are by today’s standards, still seem better in my stubborn, embittered old man mind. For example I can still totally jam out to the Dumb & Dumber soundtrack. I'm in too deep.


Like the 1990 set before it, 1991 Donruss has slight factory set variations of all its base cards. In the 1990 set the difference was in the speckles around the red border - this year it's all bout those wacky border lines. Because the world needs more versions 1991 Donruss cards. 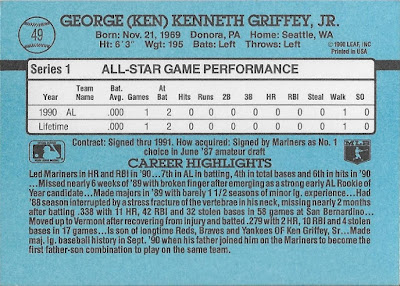 Griffey was an all-star in 1990 which Donruss celebrated with just the shadiest card there ever was. Not shady as in sketchy – shady as in, like, shade. As in an area of low light relative to one’s surroundings. You can’t even tell who’s actually at the plate here which would be OK if the photo was cool in any way, but it isn’t. Those arms are locked, my friend. He's lookin'. It might be the worst Griffey of 1991, and this was a year with reams of sub-par oddballs. 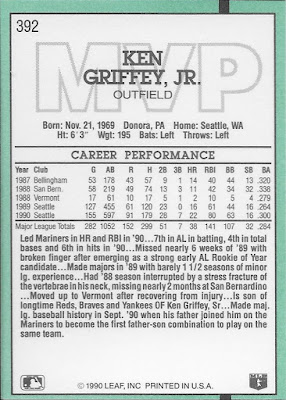 The MVP’s are green in this set which actually helps this design out a bit. The photos in this subset are portraits with a standard green background, so they were impossible to screw up. They’re not bad-looking cards, relatively speaking. I love that rainbow effect on the "MVP."

Despite the complete and utter lack of inserts, parallels, or anything remarkable in general, there are two Griffeys from this set that are actually somewhat desirable: 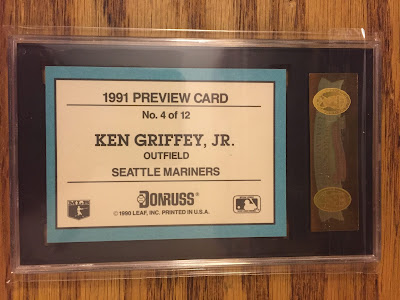 The 1991 Donruss Preview shows Junior a few feet off the bag, watching the pitcher like a hawk. It’s actually a damn good photo, and it could have changed completely my feelings towards the set. Unfortunately they ended up going with a run-of-the-mill batting photo in the end, and we’re left with this reminder of what might have been.


The rarest of all 1991 Donruss Griffeys (and the one most likely to give you rage headaches if you try to track one down) is this, the dreaded 1991 Donruss advertising sheet. It's printed on thin paper stock and has a blank back so it's decidedly sheety (as opposed to cardy), but just look HOW AWESOME IT IS. That photo is so much more appealing to me than any photo that made it into the final set, even the passable MVP portrait. LOOK HOW YOUNG HE IS!


It took me years to finally track one down, and when I finally did I ended up a couple so I could keep one and trim another. Would PSA grade this thing, you think? Seriously, I want to know.

So the two best Griffeys in 1991 Donruss didn't even appear in packs - technically you couldn't even buy them. How frustrating is that?? And on top of that, if the preview and the sample are both superior to the final product, is that not the definition of false advertising?


The best part of 1991 Donruss is that if you bought the factory set, you got preview cards for 1991 Studio, one of my favorite sets of baseball cards ever made. I imagine finding those puppies in your factory set was like finding an onion ring in your French fries. Wait, no, that’s not a good analogy. French fries are good. It was probably more like finding an onion ring in your box of turds. Yep, that feels right.

Posted by The Junior Junkie at 7:00 AM