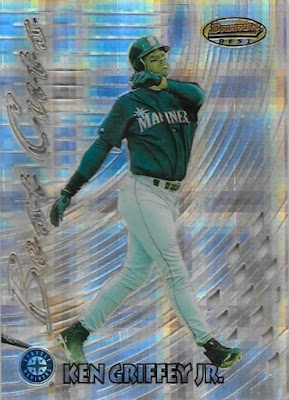 I never really felt like Bowman was for me. Nothing against the set in general, but it always seemed to be marketed more toward the prospector than the Griffey-worshipper. That marketing was never more straightforward than in 1997 when Topps offered collectors the option of a $125 full-set buyback to all but guarantee they were getting their money’s worth out of this year’s crop of blue cards (blue cards were the rookies/prospects).

I was 16 when this set came out, and even then I remember being put off by the direct monetization of the hobby here. I was okay with collectors doing it on the secondary market, but there was just something about the manufacturer being so open about the money-grubbing of some collectors that cheapened the whole experience for me. Is anyone going to be so concerned with whether all those 50 and 75-cent cards are going to add up to enough to make buying packs worthwhile? I don’t care – just give me pictures of the baseball men.

Like if Hooters’ advertising was just about the hot chicks and the food/beer/plethora of big-screen TV’s were all simply an afterthought. Yeah, we all know why people go to Hooters, but it’s a restaurant first and frankly their wings are gross. Plus one time I ordered a half-dozen raw oysters there and DON’T DO THAT.

Anyway a year later I wouldn’t be buying packs at all. I’m not directly blaming 1997 Bowman for that, but it didn’t help.

Bowman made three sets in ’97, and we are going to cover them all here because there are not enough Griffeys in there to justify three separate posts. And I'm maybe a little lazy on the posting front in the first place, so....anyway, here we go.


This card front has a lot going for it. A bunt shot, a good look at Junior’s signature Nike cleats, and a blurry day-game background crowd to creep on. Add to all that one solid focus tongue, and you have a serious banger on your hands. Possibly the greatest Griffey photo on a Bowman base card. I'm smitten with the fact that they superimposed the top of the photo over the card border. Good-looking card. 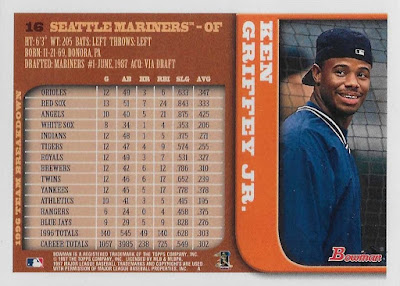 Design-wise Bowman was coming off the busy ’95 and’96 designs (the latter of which resembles a Navajo blanket). The ’97 set brought a newfound simplicity that would be Bowman’s hallmark more or less from then on. The red/blue disparity that was only hinted at in earlier designs is front-and-center this year.

These also came in International Foil versions with big ol’ flags in lieu of the stadium crowd. Unfortunately I don’t have that card yet (this post is by request, so I went ahead with it anyway). Anyhoo, spoiler alert: Griffey’s is America, baby. Errrrrybody know what that look like.


That’s it for Junior in the 1997 Bowman flagship set – a base card and its parallel and nothing else. Frankly I have no excuse for not having the flag card yet – it’s not expensive. But I do have a few things that are better… 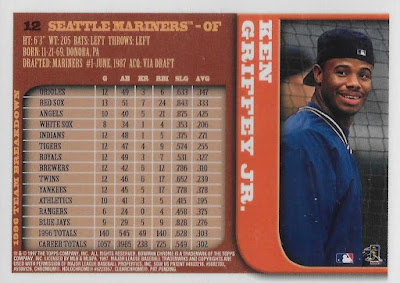 They replaced the black borders with this pinstripe stuff that I can only assume looks amazing as a refractor. Maybe they didn’t think the black would do the refraction justice, but I bet there are some executive samples somewhere of a black-bordered 1997 Bowman Chrome card.

These also came America-flavored with refractor versions of each, but again, they’ve never been super high on the ol’ want list. And refractors have been going crazy price-wise so…meh. 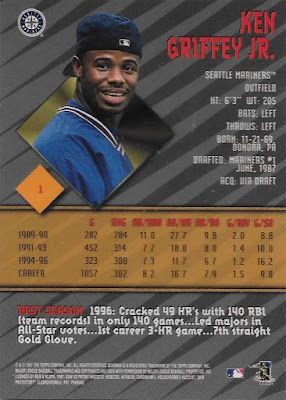 This, the 4th year of Bowman’s Best, is the worst. While I do like the font they used in the nameplate here (I call it “the Alvin’s Island font”), I get the sense they were shooting to wow us with chrome effects more than they were trying to make good baseball cards. In 1997 that was not unreasonable as chrome was still relatively new. They could afford to be gaudy in the inaugural ’94 set because WOW! CHROME! The simpler designs of ’95 and ’96 were the high-water mark of the brand as a whole, even to this day in this collector’s opinion (though the 2001 Griffey was a damn good base card).

But the ’97 design is just kind of a mess. The peek of foot-level photo background was a strange move. We had gotten a taste of photo background the year before, but it was large, centered, field-shaped, framed in gold chrome, and at body-level. Why did they choose to show us the dirt and grass this year?

I try not to be too complainy in these write-ups, especially since I hardly ever do them anymore (my b), so I’ll just focus on the good, specifically the Alvin’s Island font, and say that it makes me want to go out and buy seashells and airbrushed T-shirts.

These okay-ish base cards also came as a standard refractor and the still-pretty-new Atomic Refractor. They are both reasonably cooler than the regular base card, but no so much so that I’m chomping at the bit to get at them. 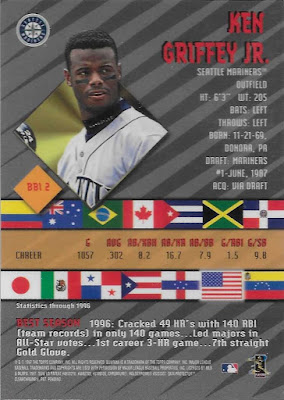 One of the signature aspects of Bowman is the rookies, and there are a lot of rookies from outside the U.S.; so the flag thing was kind of a no-brainer. It’s pretty cool, too, seeing all those colorful flags in shiny chrome. Colors pop in chromium, so pretty much all the flags look great. Griffey is from America, dammit, so please enjoy some stars and bars in lieu of grass and dirt in this here foot-level inset. 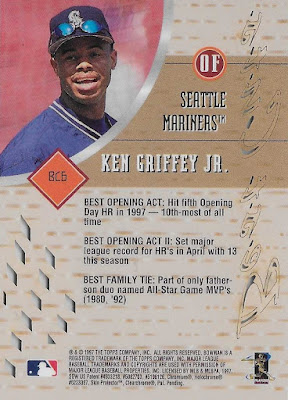 The Best Cuts insert is more what I would have liked the base card to be, but with some internal die-cutting as pioneered by the previous year’s totally awesome Topps Laser. As is usually the case with unique printing methods, the scan doesn’t really do the card justice. Also the die-cutting here is tiny, detailed, and sharp. You can make it out a lot better in the back.

I don’t have the regular refractor, but I do have the atomic; and let’s be honest - that’s kind of all you need. 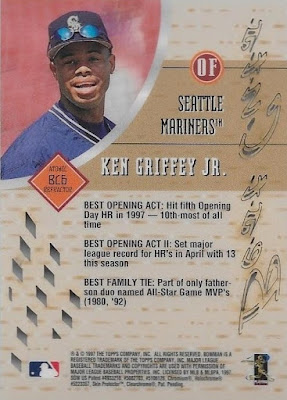 Alvin’s Island font is BACK! Saltwater taffy, anyone?

If you ask me, this is the real prize of 1997 Bowman’s Best – the coolest card, the coolest parallel, and the most difficult pull at 1:96 hobby packs. The numerous other refractors and atomics and be-flagged ’97 Bowman Griffeys are each somehow just a little less cool than this one card; and my already having it is a big part of why I haven’t been knocking out the rest of this year’s Bowman Griffey checklist.

There was a time when I wouldn’t have rested until they were all mine, but let’s be honest, fellas: once you’ve had single malt, there’s no going back to blends. You don’t go back to the carpet store. You go off the grid. You don’t have a social security number for Roy. That’s how the game is played.

Topps seems to agree with me: 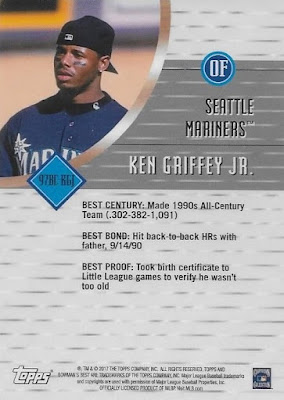 The ’97 Bowman’s Best Cuts insert was brought back for its 20th anniversary in 2017. Topps has been cranking out the throwback designs, and I am totally all about it. They did not include the internal die-cutting here which is especially strange as that was kind of the whole shtick of Best Cuts in the first place. Perhaps the technology has been lost or is just too expensive to implement for such an attainable insert, but it shows how popular the ‘97 Best Cuts were that they rehashed the design even without the namesake cuts. Still weird, though. 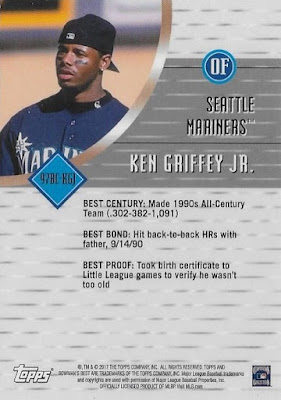 These also came in this regular refractor as well as a Gold Atomic and 1/1 Superfractor but I’m not made of money and also NO CUTS. Meh. 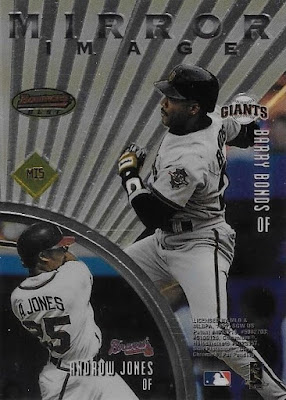 I am utterly indifferent about this particular insert for myriad reasons, the biggest of which is the fact that that one dude is on there and get on outta here with all that mess thank you very much. Andruw Jones and Jose Cruz, Jr. are okay by me, but come on. I mean really.

Add to that the fact that there are so many versions of this damn thing, half of which are utterly indefensible. You’ve got the regular, the Refractor, and the Atomic Refractor. Fine. This is all fine.

Then you have this “Inverted” gobbledy-gook and the two refractors that go along with those. That’s SIX versions of a card I’m not crazy about to begin with. The design isn’t even too bad – frankly it’s a fun way to make a multi-player card that incorporates the layout of the regular base design. It’s just…ugh…that one guy. And the paragraph of legalese on both sides. Man, don’t make me buy all these things.

‘90’s refractors are all exploding in value these days, but these are still pretty affordable. And I STILL don’t want them. Jason Vass is right. Barry Bonds cards belong in the trash. 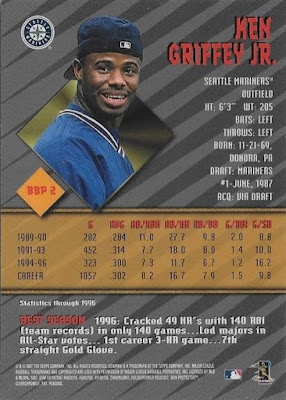 I saved a preview card for last because I did not want to end with a card that includes he-who-shall-not-be-named. These were seeded into packs of 1997 Bowman flagship and appear to be more common than the regular cards they were previewing. This is rather a bigger deal than it ought to be as the previews also came in refractors, both atomic and regular, so you could potentially have all of Junior’s base cards in all their rarest forms without actually having them. In fact odds are in favor of this being the case.

Here are all the Griffeys I need from all three 1997 Bowman brands as of this writing (it's a lot):

I feel like a negative Nelly after writing that last bit, so I’ll end with all the good stuff about the Griffeys of 1997 Bowman.

The flagship base card is nice, the flags look amazing in chromium, and of course those lovely atomic refractors. Also it's nice to see new inserts being produced based on old classics like Best Cuts. Okay, that's it.

Thanks for reading!
Posted by The Junior Junkie at 9:24 AM