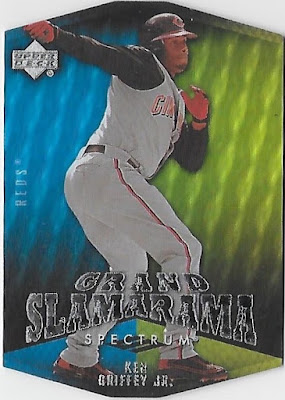 Before we even get started I feel I should come out and admit that I should not make this post because I do not have enough information about 2007 Upper Deck Spectrum to do so, but I’m doin’ it anyway because I am incorrigible. Being that there is no Baseballcardpedia article or set details in general on any of my favorite online card databases, every bit of set knowledge you will see here was gleaned by me personally from the handful of cards I have, multiple incomplete online sources, and one overpriced sealed pack I bought online which I will be busting later in this post.

2007 Upper Deck Spectrum has a 170 card base set with a heavy focus on rookies. In fact base cards #101-150 are an autographed subset called Rookie Signatures. That suggests to me a challenging base set build with 120 base cards and 50 autographs. The base set also comes in multiple Die-Cut parallels including Red, Gold #/99, Jersey Number #/varied, and Blue Autograph #/5. There may or may not be a 1/1 parallel, but I haven’t seen one.


The design is actually pretty damn cool for a foilboard which is not always the case. They all use angles, shading, and shadow effects that produce a reasonably believable 3D effect that makes it look like the player is standing in the corner of a holofoil hall of mirrors. They look really cool. 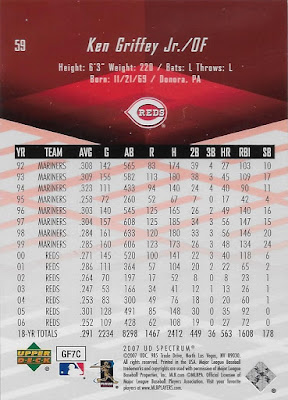 The back is simple to the extreme, and features as many years of stats as they could reasonably fit onto the card. Can’t really fault them for that. The focus of this set was always the 2 autos per box and the myriad relics and numbered cards, so no complaints, really.

Junior’s base card may or may not have also come in one of multiple parallels, including but not limited to:

I have seen none of the Griffeys for these these, but I have no reason to believe they don’t exist. If anyone has any to show I’d love some scans.

Here are ALL the inserts of 2007 Upper Deck Spectrum (even Griffeyless):

Junior almost certainly does not have cards in Rookie Retrospectrum, Spectrum of Stars Autographs, or Cal Ripken Jr Road to the Hall based on title/theme alone. There is, however, a very good chance he is in pretty much every other insert. And he is most definitely in these next three: 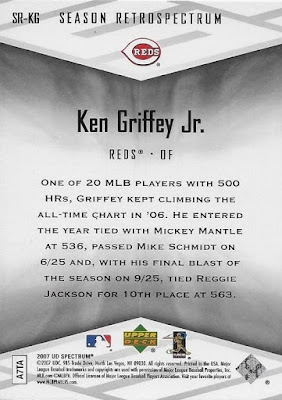 All the cool 3-D perspective tricks I love about the base design are amplified here. It looks like Junior is standing in a small room with TV’s along all the walls like Neo in the source when that one dude is all:

The white/holofoil combo works, and the refraction is so strong that every scan appears to come out different.


This is the very same card you saw a few photos up but from a different scan. I was reviewing scans for this very post when I came upon this extra one and thought it must be a parallel, but after a bunch of time wasted researching a blue parallel of this card, none apparently exist. There is an autographed parallel of this insert that has a blue background, but that one is much darker and, you know, autographed.


This card is pretty much the impetus for this whole post. I’d seen it on social media and in eBay auctions a few times, but it was always just a hair out of my grasp until recently when it cracked the Top 10 of my annual Top 30 Griffey Acquisitions of the year list. The checklist is easy enough to find online, but the insertion ratio continues to elude me. 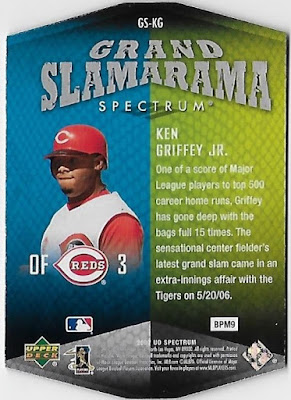 The cards themselves are heavily die-cut plastic substrate with a blurry 3D effect in the green/blue backdrop. The top and bottom was left flat which helps storage and condition a lot. I suspect that is why all three specimens graded by PSA received a grade of 10. The thickness of the card probably helps keep the condition in check as well. 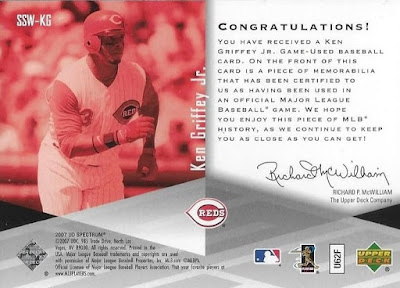 The relic cards keep the 3-D angle designs and even incorporate them into the shape of the relic, but apart from that they’re pretty standard relic cards. The fact that he has a Swatches insert card at all suggests to me that he also has cards in all the Swatches parallels, including a patch and a patch auto.

Here’s all the inserts of 2007 Spectrum that could potentially have Griffeys including the ones that we KNOW he does:

I’ve seen a Shining Star Signature of the Kid, so go ahead and count that as a definite as well. The rest are anybody’s guess, but odds are good he’s got card in all these inserts.


Which gives us a prospective list of those Griffeys I would need to complete the set if he does indeed have cards in all of them:

It’s possible Junior does not have a card in the Aligning the Stars insert or a Quad relic, but He probably does. I’d also bet heavy he’s included in all the die-cut base parallels, all the Swatches parallels, and the two Season Retrospectrum parallels (including the auto).

Hey, lookie what I have here: 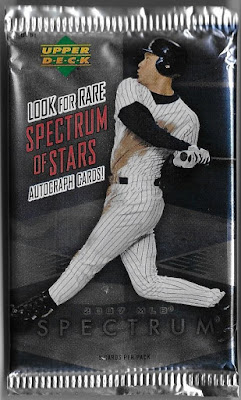 I bought this specifically to get the insertion ratios off of the back. Finally, some answers. Let’s take a look! 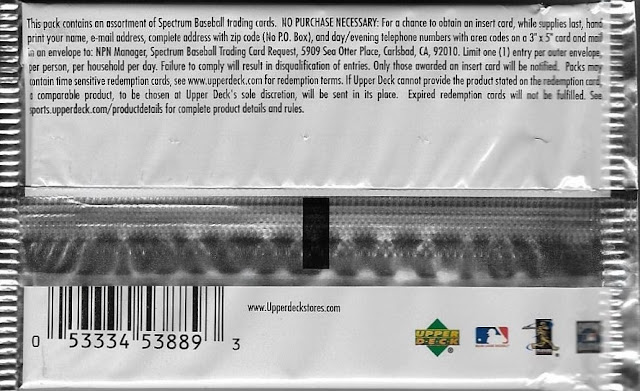 Oops – must be under the flap. 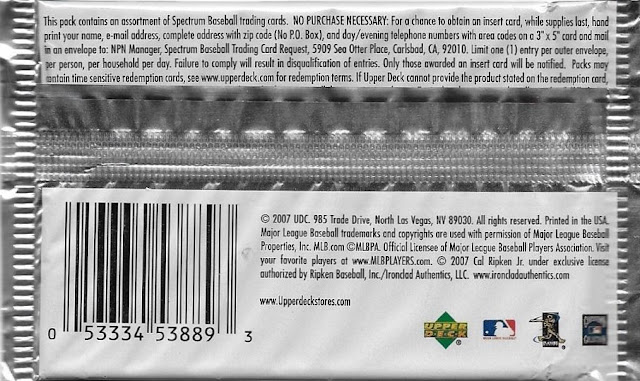 O.....kay, so they gave us nothing in terms of what cards you could pull and what the odds were. Well, at least we can bust the pack and hopefully pull something cool. Maybe one of those Griffey autos. Here goes nothing: 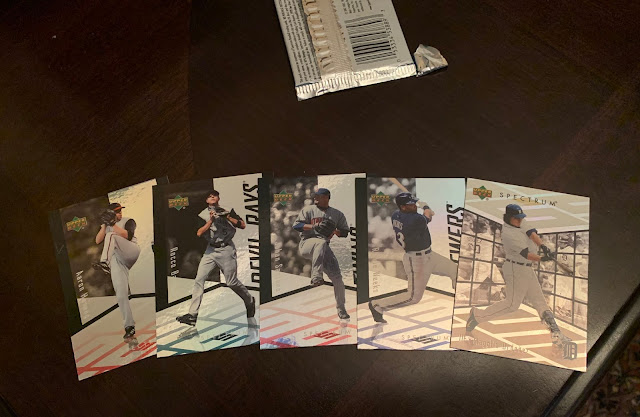 With such an apparently prolific showing, it’s a wonder there aren’t more examples of 2007 Spectrum Griffeys online. It’s probably to do with the fact that all but a couple are serial-numbered to 99 or less. That is also one of the reasons I suspect Grand Slamarama to be a case hit insert with comparable sub-100 scarcity.

But like almost everything in this post, I can’t prove it. This has been more or less all guesses, so none of this matters. 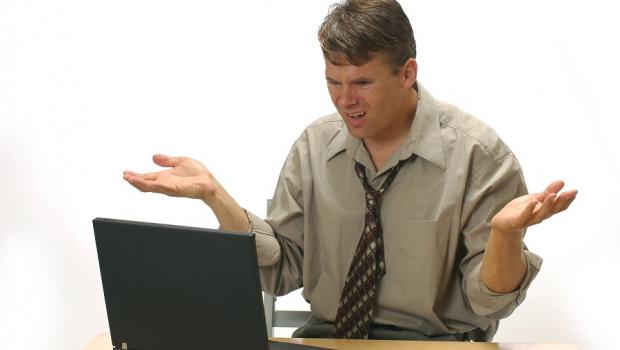 Sorry fam.
Posted by The Junior Junkie at 8:30 AM