Let’s get the obvious out of the way: this brand was Collector’s Choice first, and it was awesome then. UD Choice is alright, but it didn’t even approach the coolness of its predecessor. There are a few highlights here; but to be frank if you go into this expecting Collector’s Choice-level quality and appeal, you will be disappointed. Also there will be cans. Yes, plural canS. Get comfy.


Being such a big fan of Collector’s Choice I feel a certain loyalty to that brand that is making me want to spurn the change and find every fault I possibly can with UD Choice so I can air it all out here. However, I am happy to report that Junior’s base card here is good enough that it’s hard for me to take that negative road right now. Like if your Mom divorced your Dad and started dating some rando you’ve never met, and he actually turns out to be a pretty decent guy who busts packs with you and takes you to Applebee’s and stuff. I want to resent you, UD Choice, but you’re making it pretty hard. 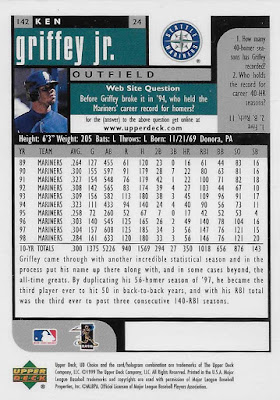 So yeah, this is a pretty nice base card. Bright and attractive, cool nameplate, and I love this shot of Junior only a split-second into a monster swing. And the back reminds me of Fleer’s late-80’s/early-90’s feng shui game where they give you everything you could ever want on the back of a card – full stats, color photo, a meaningful blurb, and TWO trivia questions with answers. Some solid engineers at Upper Deck in 1999.


Upper Deck must have made thousands of these Preview cards because they are about as easy to find as the regular base cards which is not always the case. It is literally no different from the regular card apart from that little foil “Preview” at the top (the back is 100% identical), but you need one if you’re going to complete your Griffeys here. 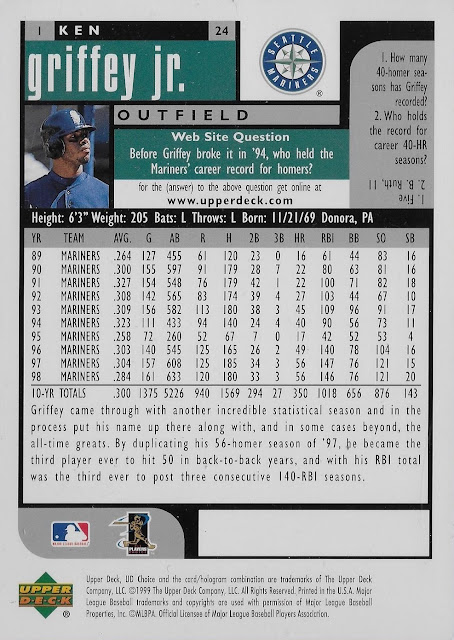 There is a #/100 parallel of the base set called “Prime Choice Reserve” (which sounds more like what they might call the $40 filet at Outback than a card parallel) that features the parallel name repeated in the background along with sparkly holofoil bits embedded right in the surface of the card. They are scarce and pricey, so I don’t have any. What I do have, though, is one of these 5x7 jumbo versions of a Prime Choice Reserve card only without the sparkly bits.

The Prime Choice Reserve parallel cards look like this:


Shout-out to Michael Rudolph, owner of these two lil' monsters of Griffeydom.

There is also a “Blow-Up” 5x7 version of Junior’s two base cards, presumably without the “Prime Choice Reserve” words in the background as mine has. I’ve never seen either of them for sale anywhere, and I’m beginning to wonder if they exist at all. It may be that the non-sparkly Prime Choice Reserve jumbos are all there is. If anyone has a non-Prime Choice Reserve “Blow-up,” please hol'atchaboy. 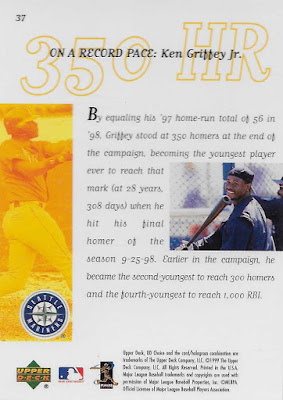 Junior’s other base card kinda resembles a magazine cover. About the most magazine-esque thing about this card is the title font. I suspect they were going for gold with that background color, but what they ended up with is summer squash which no magazine would every choose, not even Summer Squash Monthly. Another great card back, though. 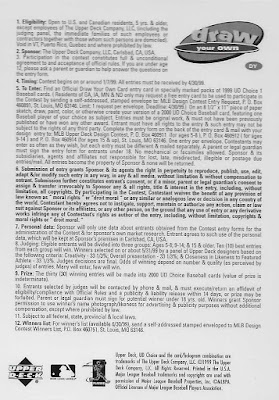 Griffey is on it, so it counts! Thirty-one winners were chosen and appeared as an insert in 2000 Upper Deck MVP. I like how Upper Deck didn’t specify Griffey must be the subject here – it just says “one baseball player,” which says to me the kids could have chosen Rube Waddell and UD would have accepted it. Griffeymania being in full swing the way it was, he ended up with four cards in the resulting set (fewer than Mark McGwire – grrrr). My personal favorite is “Lightning RAGE!” because come on. Lightning RAGE! 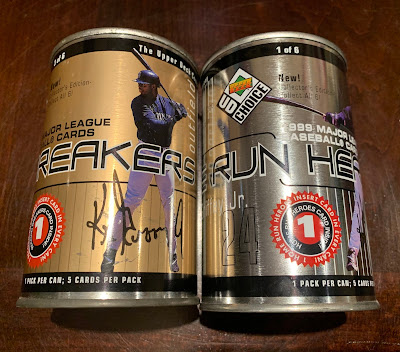 Now is a good time to bring up the cans. In addition to regular packs there were also two types of cans to be had: Superstar and Record Breakers. Both featured Griffey and included their own exclusive insert. The Record Breakers can seems to be at least a little more scarce than the Superstar one. 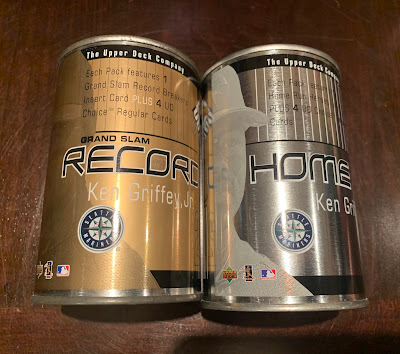 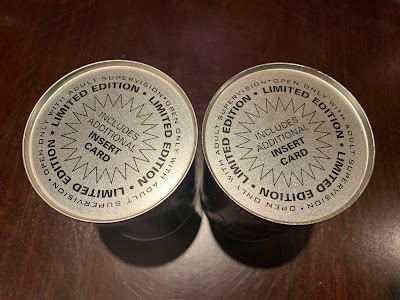 I have both versions sealed with the cards still inside. I don't know why I still have them as they take up a lot of space which is kind of the problem with cans full of cards in the first place, but you know the collector bug. She is a bitey bitch.


This insert which appeared only in the Record Breakers cans is about as Upper-Deckian as they come – modern design and fonts with plenty of lines for the sake of lines. Being that these rattled around in cans by design, they pretty much all have soft corners and edges. And I hope you like it because you’re going to see it at least two more times in this very set. 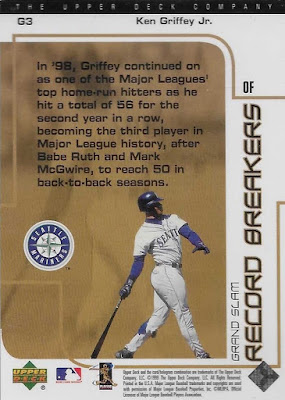 As for the theme of Grand Slams, you can forget it. This insert is about home runs and home runs only. I don’t know why they even bothered with the insert title here – not one Grand Slam stat on the whole card. 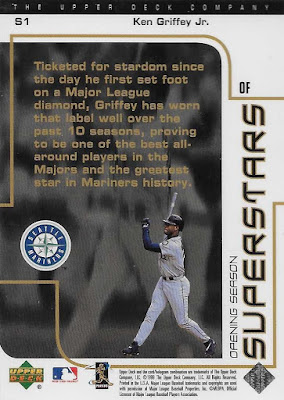 These were exclusive to the Superstar cans and as you can see are more or less identical to the Grand Slam Record Breakers insert. And that’s not all… 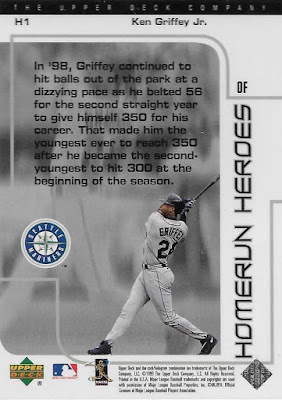 These were exclusive to retail packs and again not terribly different from the comparable can-exclusive inserts. This being a time before sites like eBay and COMC, to get all three you had to buy both types of cans as well as retail packs, and you probably had to buy a whole lot of all those. Very sneaky, Upper Deck. 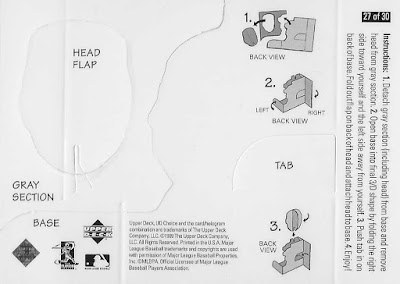 This is the kind of insert that would have been right at home in a set like Fun Pack. I haven’t had the heart to break this particular one apart, but I did assemble one for a player I didn't particularly care for. If you are wondering how well this little cardboard head actually bobbles, the verdict is “not that well.” Oh, and heads up: the answer to that trivia question is on nearly every other card in 1999 UD Choice.

This is the second year of StarQuest which first appeared in 1998 Collectors Choice – the big difference this year is that it uses colors instead of printing effects to signal rarity. We would see this insert twice more – once in 2008 and again (and more prolifically than ever) in two sets in 2009, all with both color and printing effects to reflect rarity.

1999 StarQuest was seeded one-per-pack with the green coming up every 9 packs and the much rarer red every 23. There is also a gold version that is numbered out of only 100 which is pretty scarce for a ‘90’s parallel (and the prices reflect that). I wouldn’t mind finishing the rainbow off, but I’m not in any hurry. Plus to save up the money I would probably need to afford it, I would probably have to, say, give up smoothies for five years. I’m just not willing to do that.

But if you really want to seeing one: 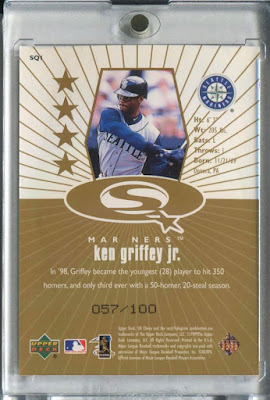 Thanks to Joe Lagreca for this image of his damn beautiful and highly enviable specimen. 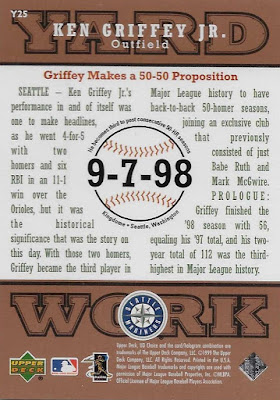 At 1:13 this is only the third-rarest Griffey to be had in 1999 UD Choice (the three rarest are all parallels), but if you ask me it’s the best Griffey in the set. We get a shot of Griffey just hammering the piss out of a pitch over a lovely green-tinted background and beside a large, stylized insert title/nameplate. It looks nothing like a Collector’s Choice insert.

Here are the Griffeys I still need from 1999 UD Choice:

The best pull you could have gotten from 1999 UD Choice was Eddie Murray’s card from the Upper Deck A Piece of History 500HR Club. While I would love one of these (Eddie Murray is a boss), one of those #/100 Griffeys would be pretty sweet, too. 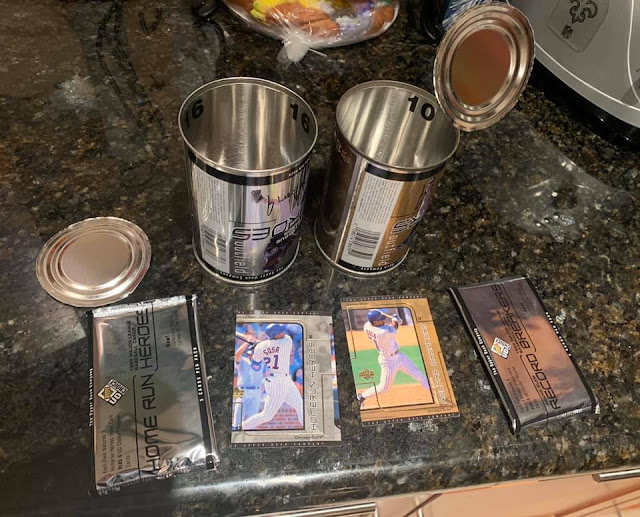 I don't need them, I'm not interested in storing them, and if I sold one that had one of the big three Griffey pulls or the Murray 500HR Club, I would kick myself, so here we are. Come along on this journey with me, won't you?

What am I hoping to pull? A Starquest Gold #/100 would be my druthers. Either Prime Choice Reserve would also make my pack (um, can) busting career. Do I have the touch? 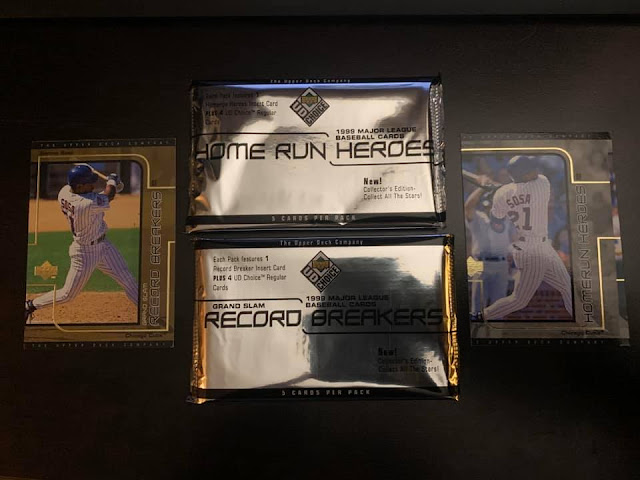 TWO Sosa's. Ugh. And look at the hack job on that insert on the right. Geez, guys. 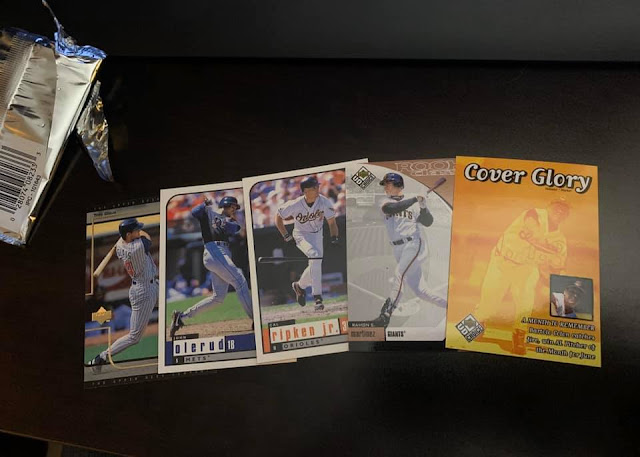 Okay, pair of Hall of Famers. Not terrible. I really like that Ripken. Not bust-out-the-can-opener love it, but it's something. 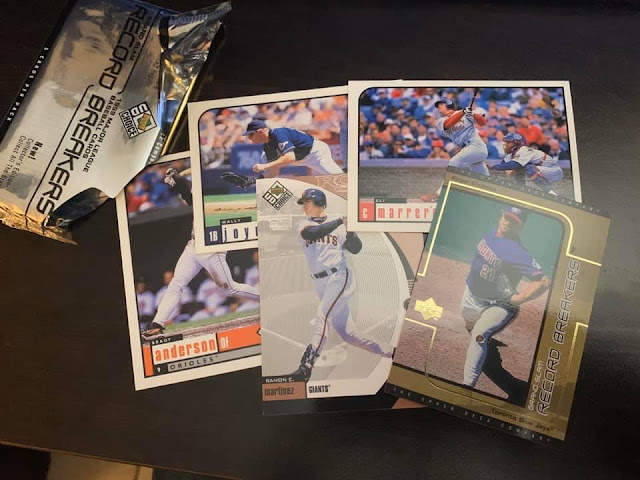 Here are some individual scan of those StarQuest cards: 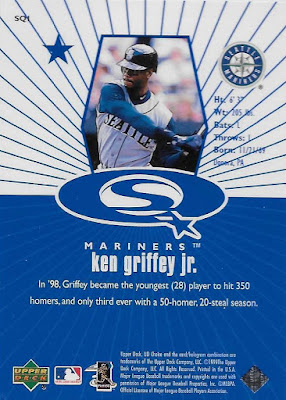 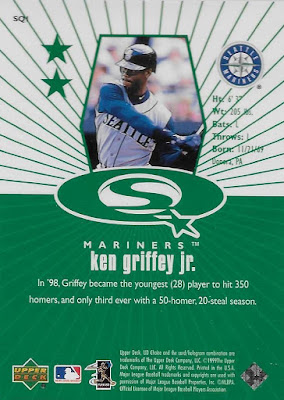 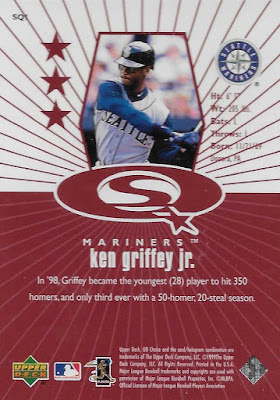