2002 Fleer Focus Jersey Edition: Thanks for the Manu-Relics 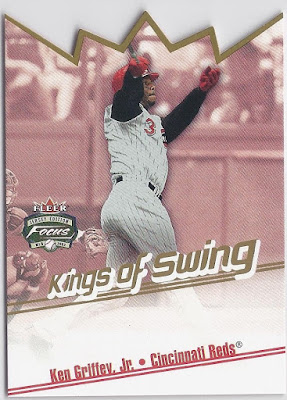 It’s hard to get excited about every single brand that popped up in the early 2000’s, especially when the set was made by Fleer. Nothing against them – they churned out above-average inserts at an almost Pacific-level pace for years – but it seems the word “overkill” is not in their corporate dictionary. In 2002 alone Fleer flooded the market with no fewer than fourteen different products. Only Topps made more.

So you can’t really blame collectors when sets like this one fall by the wayside and into obscurity, or designs all blur together to the point of relative meaninglessness. There was a time when there were only four TV stations, too, and everybody watched the same few shows. They all had opinions about them and could talk about them with any other TV viewer without missing a beat. “Doby Gillis was on point last night. Bob Denver got jokes.” Now that there are hundreds of stations and thousands of shows, most conversations start with “Hey, have you seen any of these six things?” and end abruptly at “Oh, I don’t have time for that. I’m watching these twelve other things.” That must have been what collecting was like in 2002.

So the question at this time was “What sets this particular set apart from the rest?” Well, some unique die-cutting and the introduction of the first manufactured relic are the two hallmarks of 2002 Fleer Focus et cetera  (I am not typing that whole thing every time). That’s two more things than most sets from this era of glut can say they gave the world.

Here’s the base card:


Looks like they were going for different, and they more or less got it. The border and picture flow in and out of one another with the nameplate separated by the team/position below. And I suspect that’s the wordiest logo ever committed to cardboard: “Fleer Focus Jersey Edition MLB 2002” (fine I'll type it all one more time). That’s thirty letters in six words. Upper Deck probably made something longer, but this one remains quite impressive.

As for the photo, it’s a standard fielding shot complete with flipped-up shades. It does that body outline thing we’ve seen on previous Fleer Focus base cards. The background is a little ho-hum as I guess we’re supposed to “focus” on the player image here, but that’s still an awful lot of negative space. Luckily it’s broken up by the green of the field. 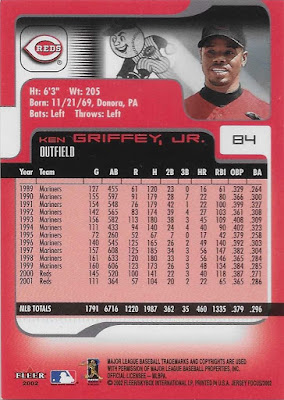 The back is the saving grace here with a big, beautiful stat box, small portrait, and Mr. Red himself repping Cincy with gusto. Fleer always did know their way around a card back. 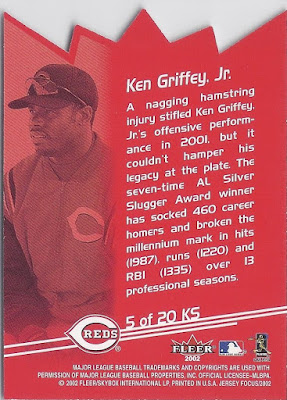 Here is some of that unique die-cutting I was talking about. It appears to be a crown shape to go along with the “Kings” aspect of the insert and the Fleer logo. Again we have a lot of white with some slight team-colored tinting in the background. There’s also an awful lot of negative space between the nameplate and insert name that is just begging for an auto parallel, but apart from that this is not a bad-looking card. 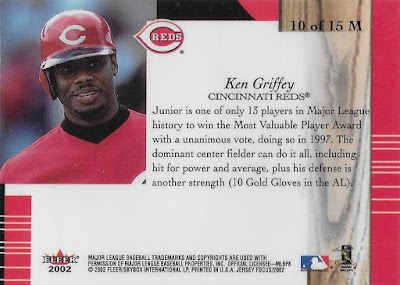 Here is the dubious crown jewel of 2002 Fleer Focus Jersey Edition: the first manufactured relic. What Fleer gave us here is a large swatch of non-relic fabric complete with a cloth-printed player image. I do like the finished product here, but I have to feel bad for the kids who pulled one and thought they had a jumbo swatch. I’m sure there were more than a few.

This card is ahead of its time in the same way that the guy who took the first selfie was ahead of his time. Some people love selfies, and some shake their head. I tend to understand both sides – there have been some cool manu-relics in the past few years. Like them or not, this is where they began. 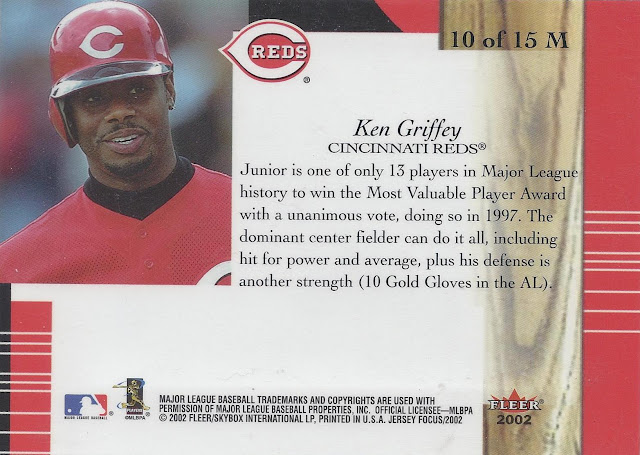 Hot damn, it’s a big one! It’s the same basic card, sure, but again there’s something about the player image artfully printed on fabric that I really like.

I have all the common Griffeys from this set – everything else I need is a serial-numbered parallel. I'm not bananas about this set, so I'm in no hurry here. Here are the Griffeys I need from 2002 FFJE:

I have to wonder if someone at Fleer thought they were giving something substantial to the collecting community with this set. I can’t imagine anyone is standing around their LCS in 2020 saying, “Topps and Panini are doing an OK job, but you know who really got it right? 2002 Fleer Focus Jersey Edition, man. THOSE were the cards.” Like many, many sets from this era, this is more a page from cardboard’s past than from its history.
Posted by The Junior Junkie at 8:30 AM