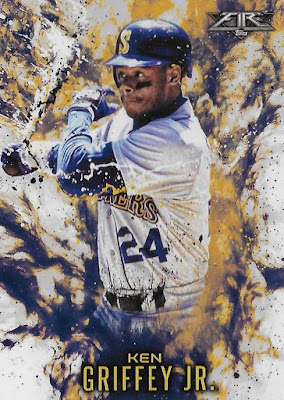 It takes a lot for me to get excited enough about a relatively new brand to write a post about it when there are still so many sets from the ‘90’s I haven’t gotten to yet. But I 'm excited about 2017 Topps Fire, a set that is hard to talk about without bringing up 2016 Topps Update; and being that 2016 Update only has two Griffeys to begin with, we’re going to go ahead and do both sets today. Just try and stop me.

I first bought a pack of Topps Fire back in 2014 when it was a football-only brand. I think it was the look of the packs that sold me at the time, but I remember being smitten with the cool, over-the-top card design and great colored parallels. Eventually Topps began issuing Fire baseball cards exclusively online, then as an insert in 2016 Update, and finally in 2017 as its own stand-alone baseball set. Griffey’s 2016 Update insert card was his first Topps Fire card: 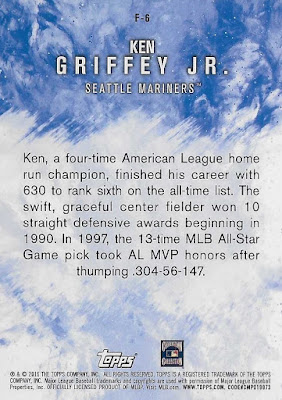 Is it just me or does this look like Junior showed up in uniform to one of those festivals in India where they throw colored dust absolutely everywhere (the very thought of which make my OCD go ballistic)? The hallmark of Topps Fire is obvious: heavy-handed, effect-driven overdesign. I am just into it.

I’m not sure if this card is meant to be blue and yellow to match the Mariners team colors, but to me this looks purple and gold, the same colors as on my favorite version of 1998 Donruss Crusade (and LSU). It looks like a damn mess in the coolest way possible – like the antithesis to the relatively orderly lines-for-the-sake-of-lines aesthetic of way too many Upper Deck inserts. Despite the sparse, three-sentence back, overall this is an excellent insert card.

While we're on 2016 Update, we may as well knock out the one other Griffey in this set: 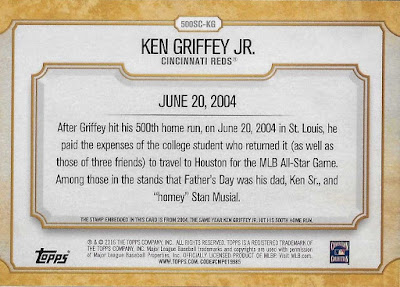 The only other Griffey to appear in 2016 Topps Update is this 500 Home Run Club Stamp card. I think Topps must have gotten a hold of someone’s stamp collection a couple years back because we went from there being zero Griffey cards with stamps on them to five in a very short period of time.

It's a pretty card, and I really like the whole stamp idea which lends itself well to card-mounting. If I had been a philatelist back in 2017 with the same passion for stamps as I have for Griffeys, I'd probably have tried to get ALL 375 of these.

Back to Fire. It returned the very next year as its own standalone brand:


The base card seems like it should be some kind of ice-themed parallel with the dominant blue and white; but that blue is on every parallel, and the white is just a placeholder for the parallels to come. For some reason they really toned down the design for the set. It’s not as crazy/busy/fun as the 2016 Update insert. I distinctly remember being really excited to finally get a proper Topps Fire baseball brand then seeing the cards and being a little disappointed at how under-the-top (as opposed to over it) they were. 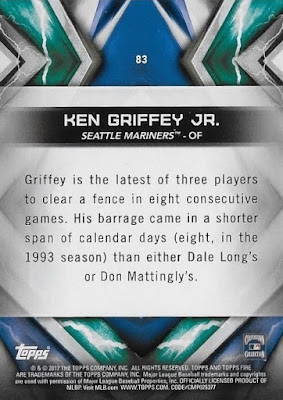 Also I hate seeing this kind of thing, but that blurb has a factual error in it. It says that Griffey's "barrage came in a shorter span of calendar days (8, in the 1993 season)," but those eight games took place over nine days, not eight. July 26th was an off/travel day for the M's.

I do want to mention that the inserts of 2017 Topps Fire are fantastic, and several of them captured that old Fire magic I wish was present in the base set:


How Griffey with his numerous nicknames did not make an appearance in this insert I will never know, but this is the kind of sloppy, colorful design I was hoping for from the base set.


Another whole set of lookers.


Man, how did they nail the inserts so hard? Good on you, Topps. These are sweet.

While there are a few inserts and autographs to be had in Topps Fire, the color parallels seem to be the force that drives collectors here with several of the parallels available only in certain retail media. You have the Gold Minted exclusive to blasters, Blue Chip in rack packs, and the super scarce but unnumbered Onyx available only in something called “collector boxes.” Conceivably you had to buy four different pack types just for a chance at getting your guy in every parallel. This is far from a new concept, but it is much more welcome in the age of online card collecting where the cards you need to complete your rainbow are usually only a few clicks and a couple of bucks away.

Here are the parallels I have with limited commentary:


Befoiled red. No serial-numbering here so the backs are identical. 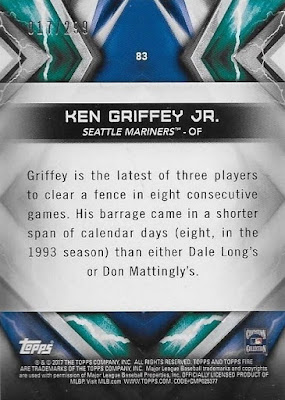 Clashy AF but finally some serial-numbering. 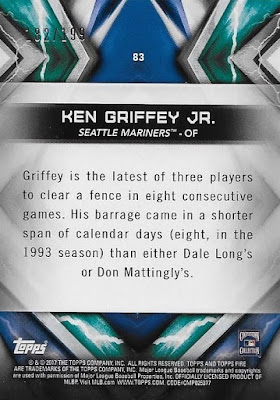 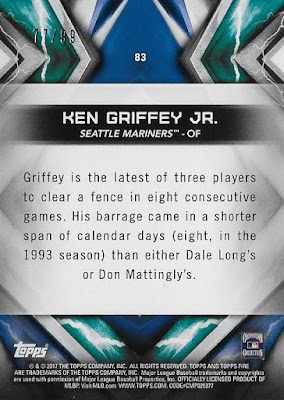 And here are the numerous Griffeys I still need from 2017 Topps Fire:

I do want to show you what the Onyx looks like, though: 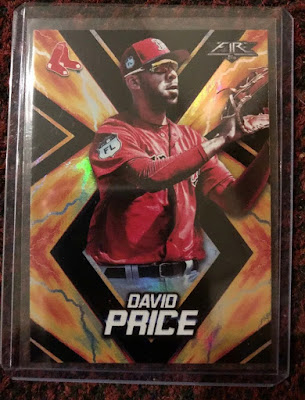 Neat, right? Again those Onyx cards, despite being unnumbered, are some seriously tough cookies. And all the autos are of the sticker variety, so honestly I’m more interested in the Onyx than anything else here because they do look really good. No Fire bug up this Junkie’s butt. I’ll bide my time. At least my 2016 Topps Update Griffey checklist is complete.