Metal Universe was introduced when Fleer was owned by Marvel; therefore, it’s only natural that the product of this partnership be a set that depicted our favorite players as heroes and villains in a fantasy comic book “universe.”  Where illustration may otherwise have looked cartoonish, Fleer instead used etched foil in the card art.  This gave a more sophisticated air to what was essentially a product for kids of all ages.

On that note the set was unbelievably fun and awesome, or at least it was for the first couple of years.  As with most sets, the concept fell apart and eventually the product lost its identity.  At least the inserts stayed consistently awesome.

Let’s talk about the name for a moment: Metal Universe.  This name has two sides with separate meanings.  Metal in the context of this brand means shiny and textured; Universe means comic book fantasy themes.  There are years when the brand leans more towards one meaning of this brand name than the other (which is fine) and even one year when half the brand’s namesake gets completely ignored (not fine).

Here is every Fleer Metal Universe base card design in order: 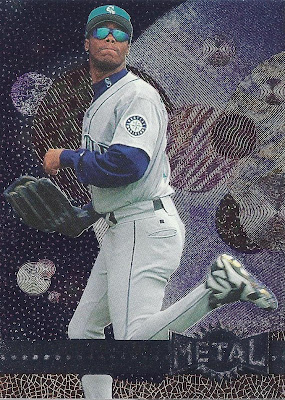 The first year of Metal was also one of their best years design-wise, and it featured etching unlike anything that had been done before.  Fleer used a ludicrous amount of stippling and hatching to create exciting shapes, textures, creatures and planets as well as cool fire and water effects.  Even with all that foil work, the cards remained colorful.  There is some repetition of themes among the base cards but not an obnoxious amount.  The nameplate below is shiny and simple enough, and the brand logo is ornate and cool.  Amazingly, that logo would remain relatively unchanged throughout the run of the brand.  Homerun. 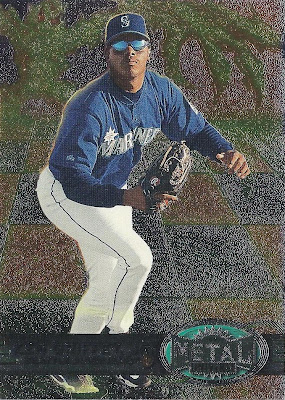 Where the ’96 set was a homerun, this one is a grand slam.  While its forerunner was comprised of a dozen or so different fantasy themes, the ’97 set had very few repeats in that area (I stopped counting themes at thirty).  Every card feels completely different.  This set also boasts the brightest colors as the foil etching has evolved from simple stippling and hatching to more complex patterns and the inclusion of non-etched areas that can reflect more light.  The nameplate didn’t change all that much outside of a little shadow added to the lettering for impact which I really like.

It seems to me like Fleer/Marvel chose a design team that really cared about the product they were making, and then they gave that team carte blanche to create as awesome a set as they wanted.  Just thumbing through the base cards it seems like the design process must have taken weeks and required a ton of imagination.  Anyone who is even mildly into creative visual design would probably have a blast working on this project.  Fantastic. 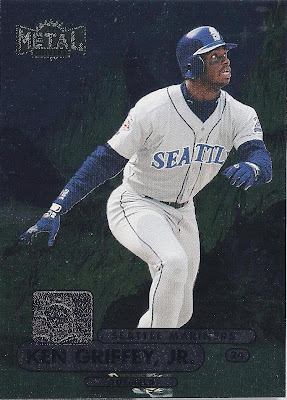 I really hope you enjoyed those last two designs because it’s all downhill from here on out.  This is the only Metal release not to feature foil etching apart from on the small portrait on the bottom.  Instead they took this flat, dark, impossible-to-scan foil and added illustration to the background that was completely without the boldness of the previous years.  You might also note the complete lack of color.  Well, you’re right - even viewed in real life and not in scan form, the colors are washed out in darkness.  At least it maintains the slightest bit of the brand's original aesthetic, unlike…. 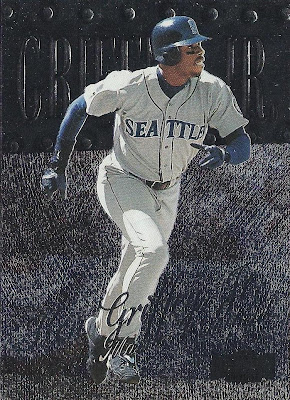 This set is all Metal and no Universe.  They added a huge name plate with big iron rivets then filled the rest of the background with rough-looking cross-hatched foil that doesn’t reflect quite as much light, thereby offsetting the shininess of the name plate.  So what do you do once you’ve filled up a third of the card with nameplate?  You throw the name on there again, of course.  I like the font, actually, and the cards don’t look that bad overall; but I can’t overlook the fact that somebody humped the bunk here.

Don’t get me wrong - I get (and even kind of like) the aesthetic they were going for, but it’s not the aesthetic of Metal Universe.  What they’ve done here is create an entirely new brand identity.  If you take a banana split and slowly change it bit by bit into a cheese sandwich, at some point in that process you’ve got to stop calling it a banana split, bro.  Take the Metal Universe logo off and call it Fleer Steel or something. 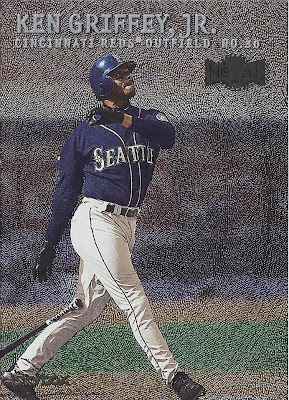 It seems Fleer took my advice and removed the word “Universe” from the brand name this year, opting instead to focus on the brand’s use of etched foil as opposed to fantastic backgrounds (one year too late).  They even did one better and took the Fleer name off the product as well, instead designating Metal as a Skybox product.  Design-wise the effect of the etching here is cool but maybe a little too understated .

For example, you can see pretty easily in the scan that there is a very slight spiral to the stippling in the background that follows the action of Junior’s swing.  This effect is mimicked to some degree on every base card with most cards having a simple bursting effect.  However, the effect is not as apparent when looking at the real card dead-on - It comes out a lot better in scans.  The result is a set of base cards that feel like a parallel for another set.

With that the Metal brand came to an end.

I think these cards must have cost a fortune to design and print; but then the budget shrank as revenues from baseball cards fell off, and they had to cut back.  Still, I bet it was fun as hell sitting in a room with a bunch of comic book illustrators, finding interesting player poses and deciding what to do to make each card come to life.  If I could pick any set from the 90’s to have worked on, it would be ’97 Metal Universe.  That set is a masterpiece.

The Metal Universe creative process was so far beyond that of “find picture, slap on nameplate, stamp on logo, wrap stack in Mylar, repeat.”  There was real originality there for a few years.  If I'm wrong about decreased revenues causing the decline in quality here, then it sucks that we lost a great brand to somebody’s preference of “Ooh, shiny.”  I would like to have seen this brand skew the opposite way - no metal, just real player photography superimposed and interacting with crazy fantasy worlds that might have been illustrated or even computer-generated.  They could have called it Fleer Marvel.  It could have been awesome. 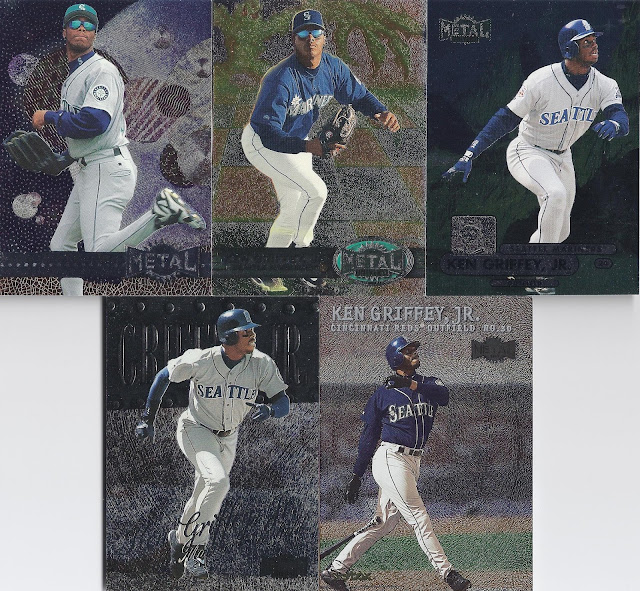