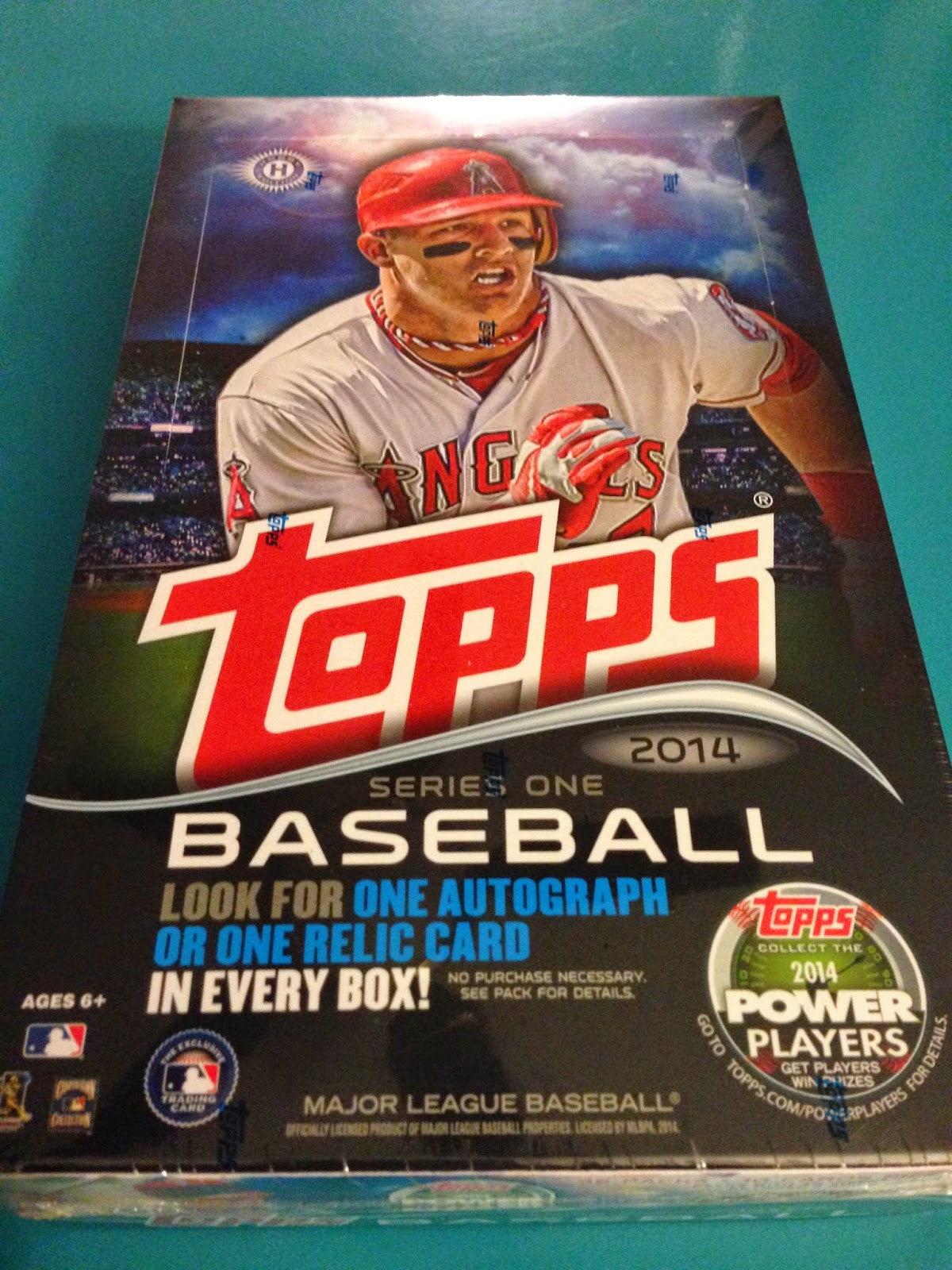 I think someone at Topps reads this blog. Here’s why:

Holy Balls. That is a lot of Griffeys, guys - more than any other set I've seen since I started collecting again. Of course this is me lumping Series 1 and 2 together, but apart from that it’s still a pretty impressive list. Perhaps they thought they’d be getting more of my hard-earned moolah by loading the packs with Griffey inserts, and they were right. They did. They really did.

To keep this post from being a digital mile long, right now we’re going to focus on just the Griffeys of Series 1.

As you well know by now, gentle collector, this year’s Topps inserts have been all about the rookies. Not the rookies of today – the rookies of yesteryear. Class Rings, framed rookie reprints, All-Rookie Team, Before They Were Great, and rookie cup and trophy manu-relics abound – and that’s just in Series 1.

Let’s start by looking at some sweet base cards: 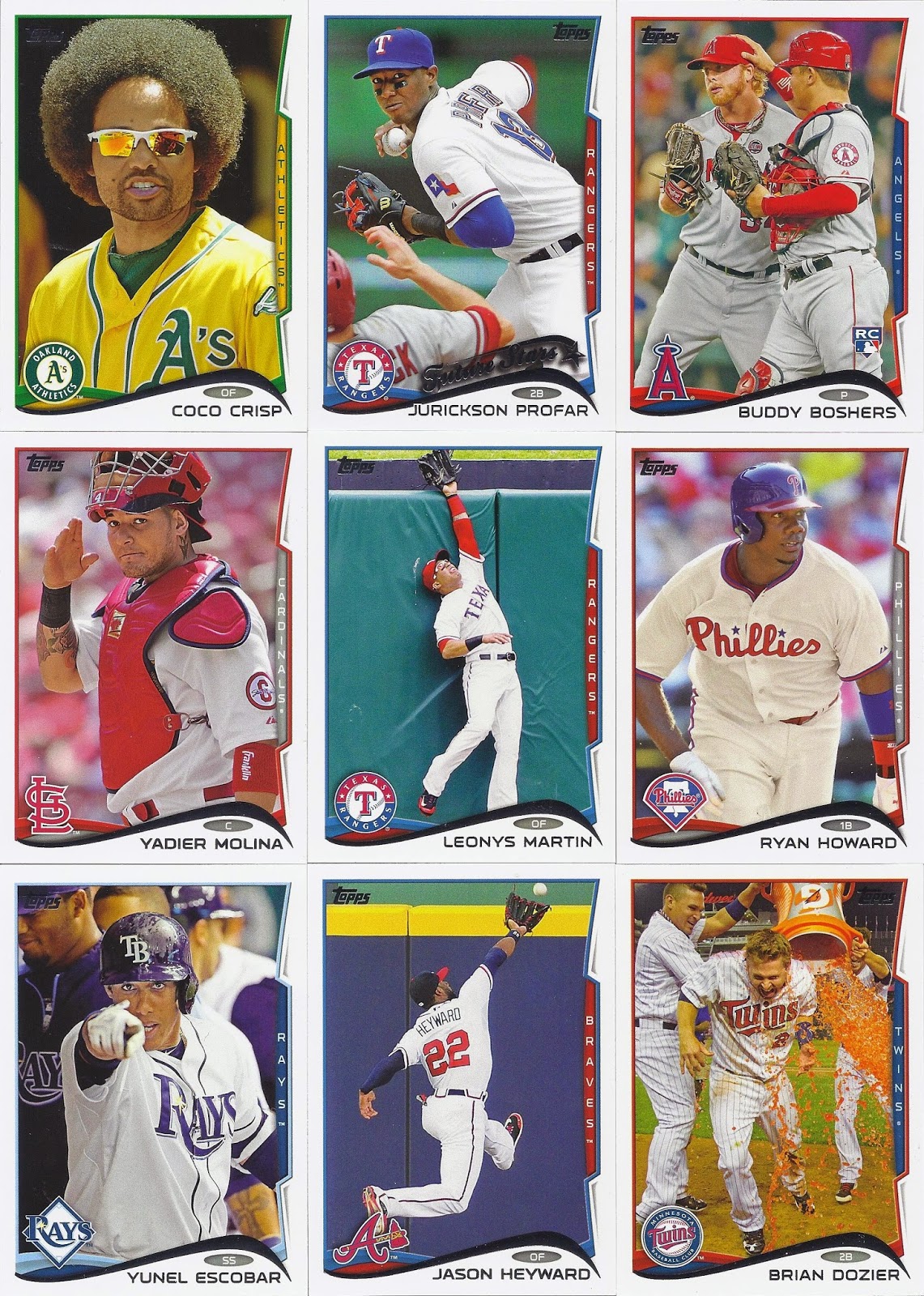 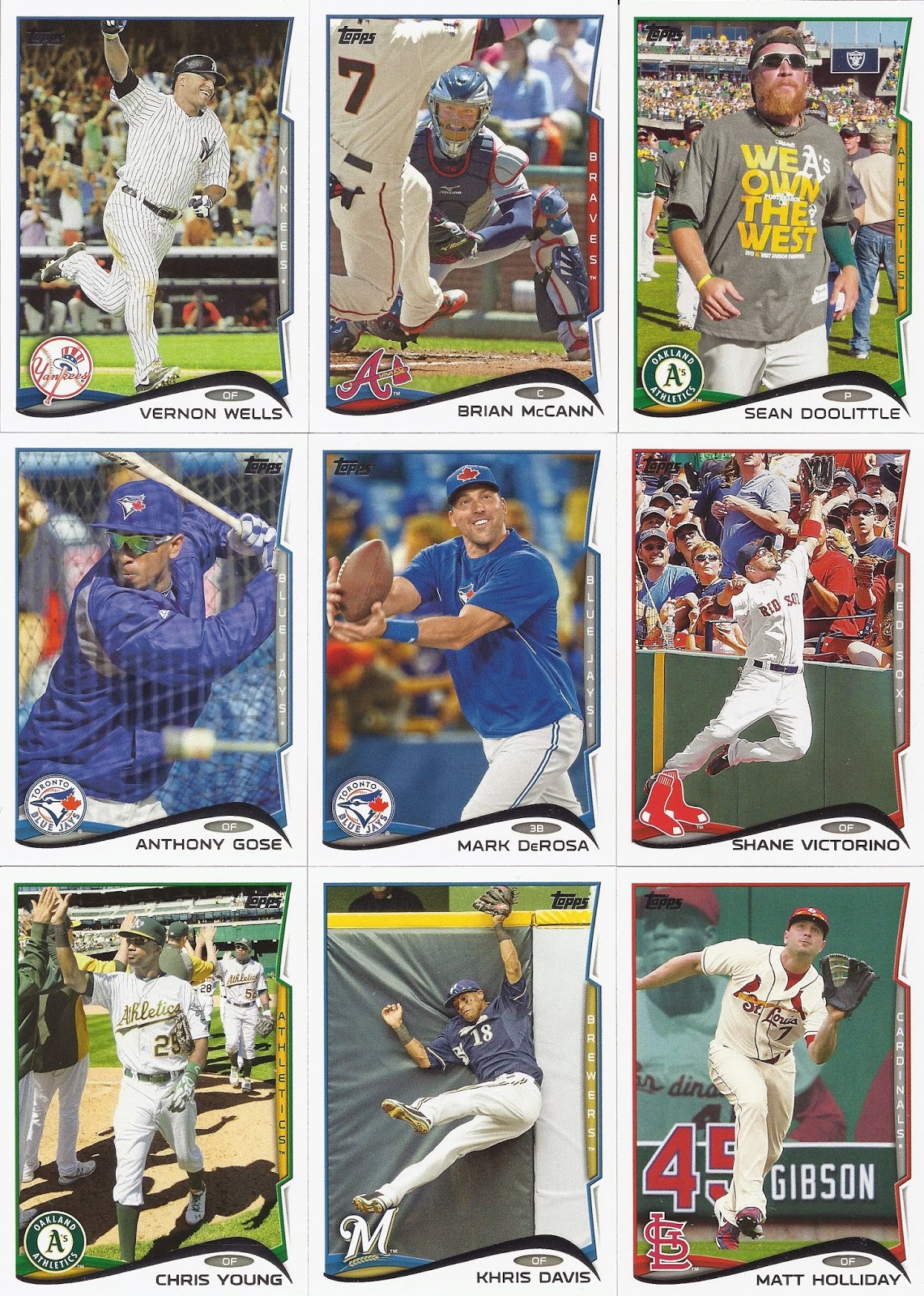 The base set photography is mostly the run-of-the-mill close-cropped action stuff we’ve come to expect in Topps base sets, but there is also a nice cross-section of fun photos with cool backgrounds. I think you need the former to really appreciate the latter. They can’t all be fun and unique, can they? (Even I can’t tell if that was sarcastic or not.) 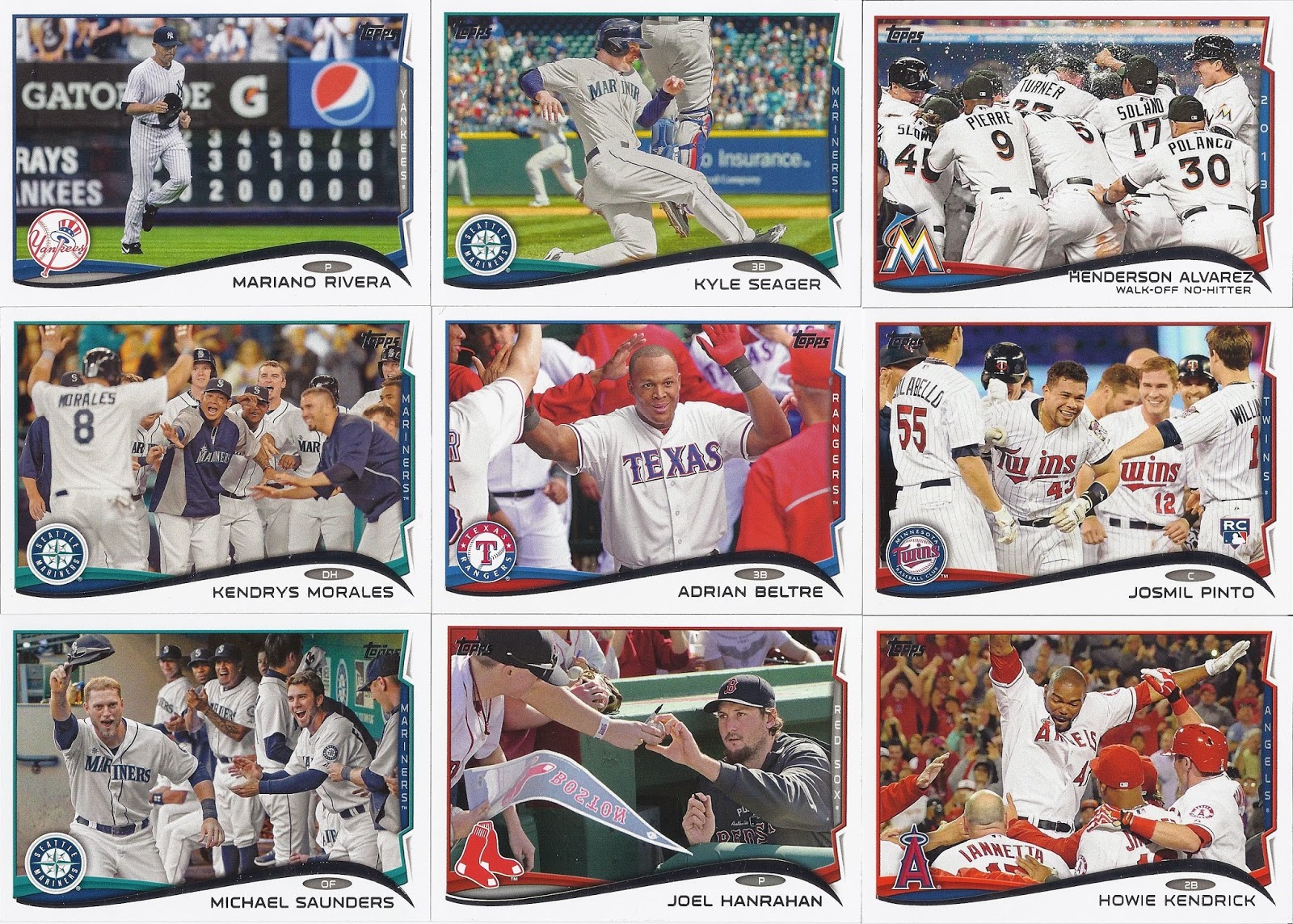 I, for one, really like the base set. The design is modern and far from boring, the colored parallels look great, and the photography, while I could see much of it being considered unspectacular, is crystal-clear and impeccably printed. 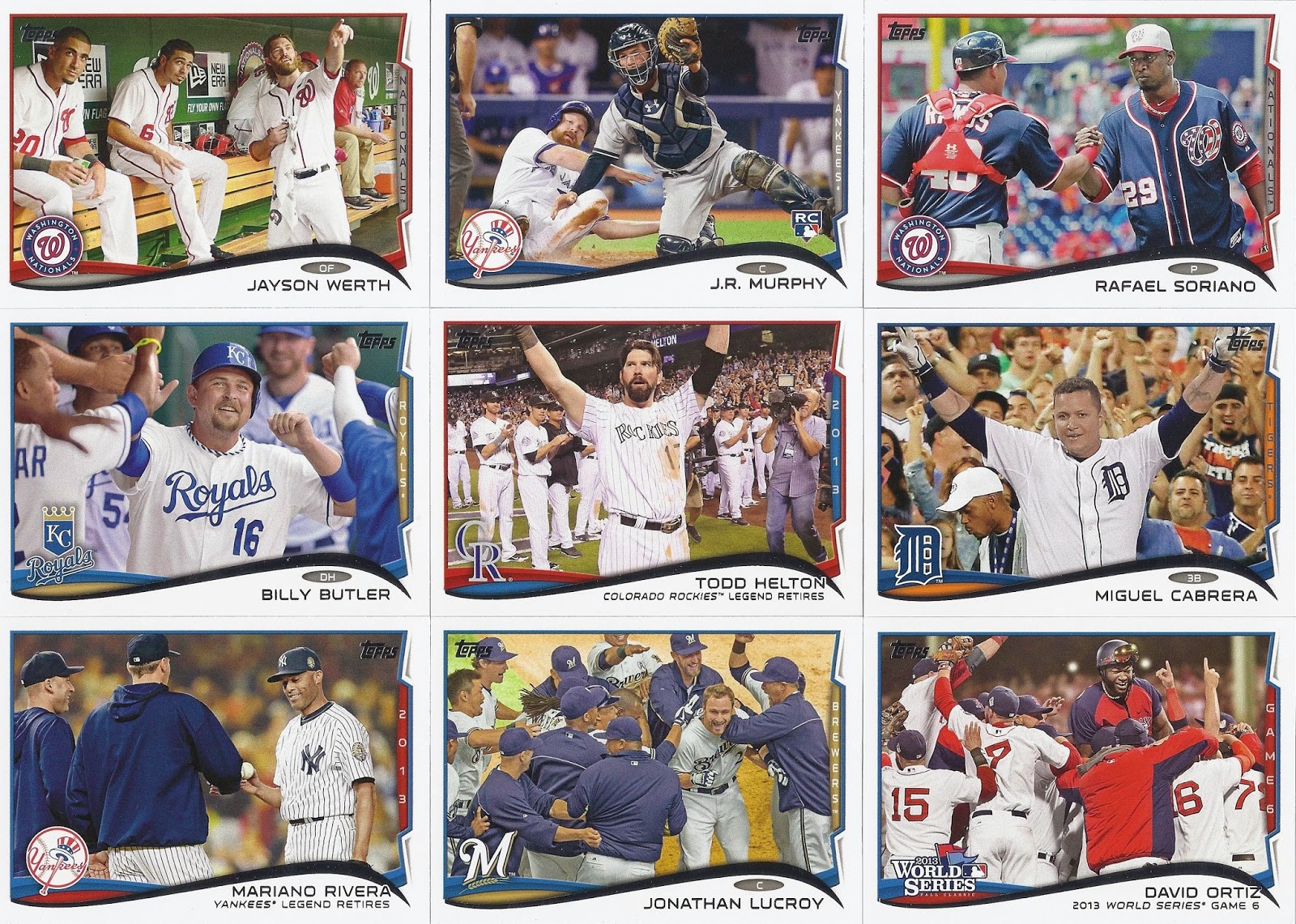 But who cares? There’s no Griffeys in there. No SP’s or subsets or cameos – none of that. Just…ugh…other dudes.

Here are the real gems of Series 1: 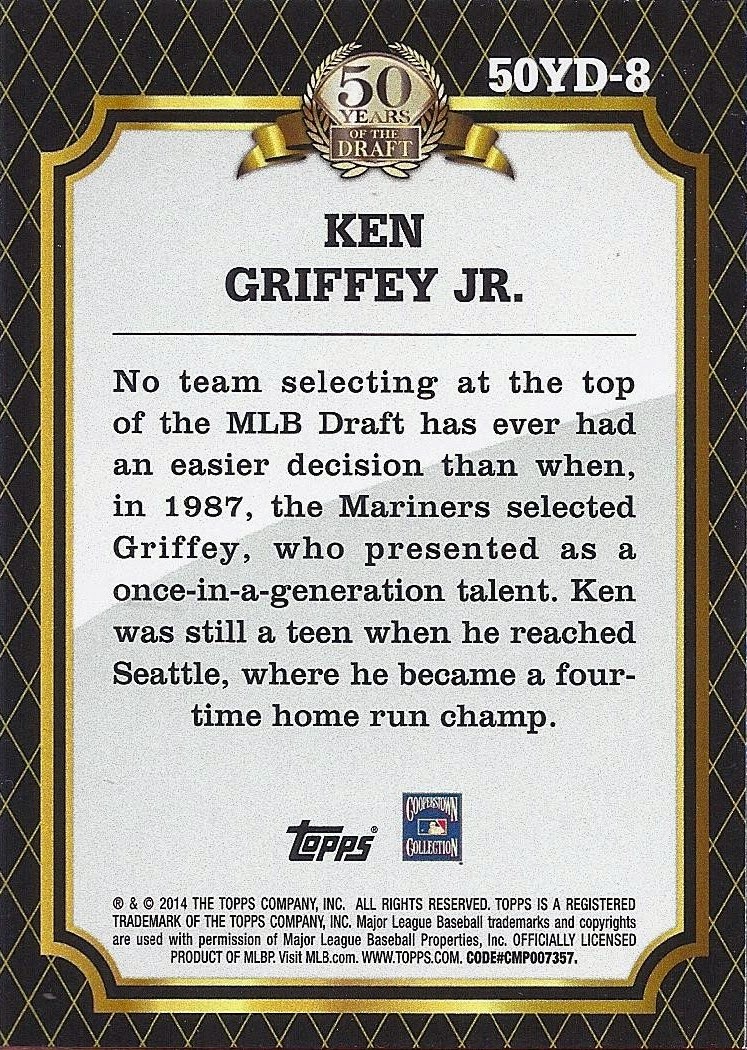 A pretty nice design for a common insert, but I'd like to have seen gold foil on the border and in the little home plates in the corners on the front.  They did it for the mediocre Upper Class insert at the end of this post, so why not throw some in here?  It would have made the card.  That said, these have a solid insert logo and one of the better-looking card backs among all the inserts. 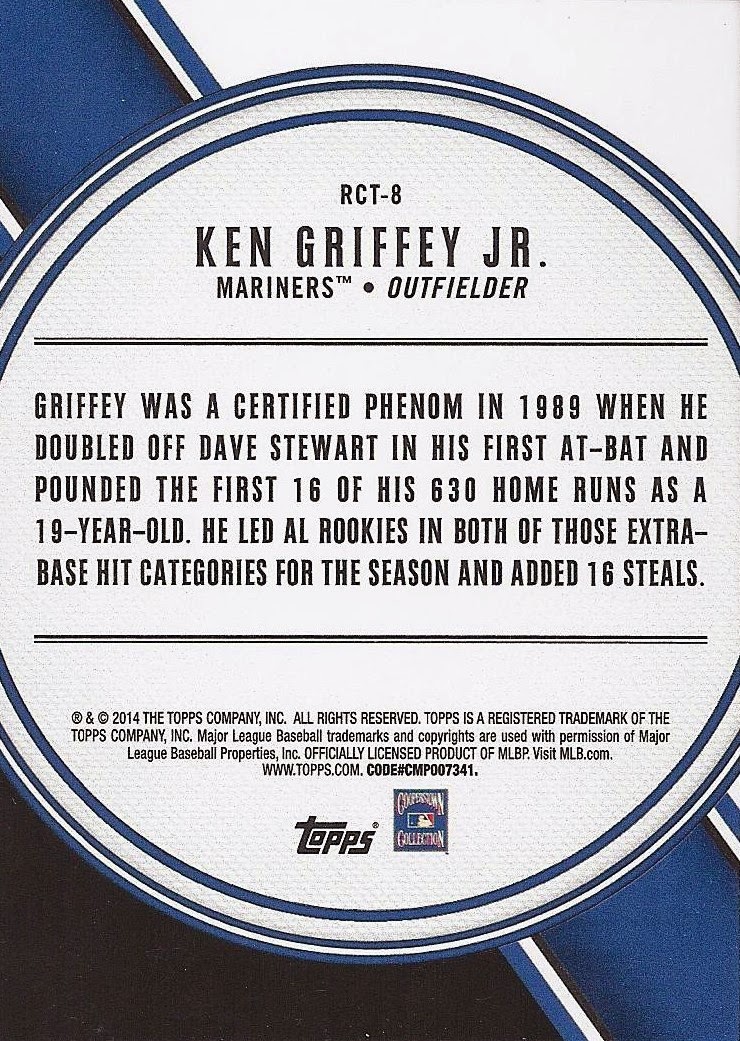 Probably the easiest pull of all the Griffey inserts, Topps placed a classic M’s logo where a relic might otherwise go. I appreciate that move as I’ve seen far too many non-relic cards that just scream out, “Look! No relic! But if there was, it would go right here!”

The blurb on the back is a little clunky, but the picture is great. Chain all bouncing around. That’s some gangsta hustle right there. Get used to it, too – this picture comes up a lot. 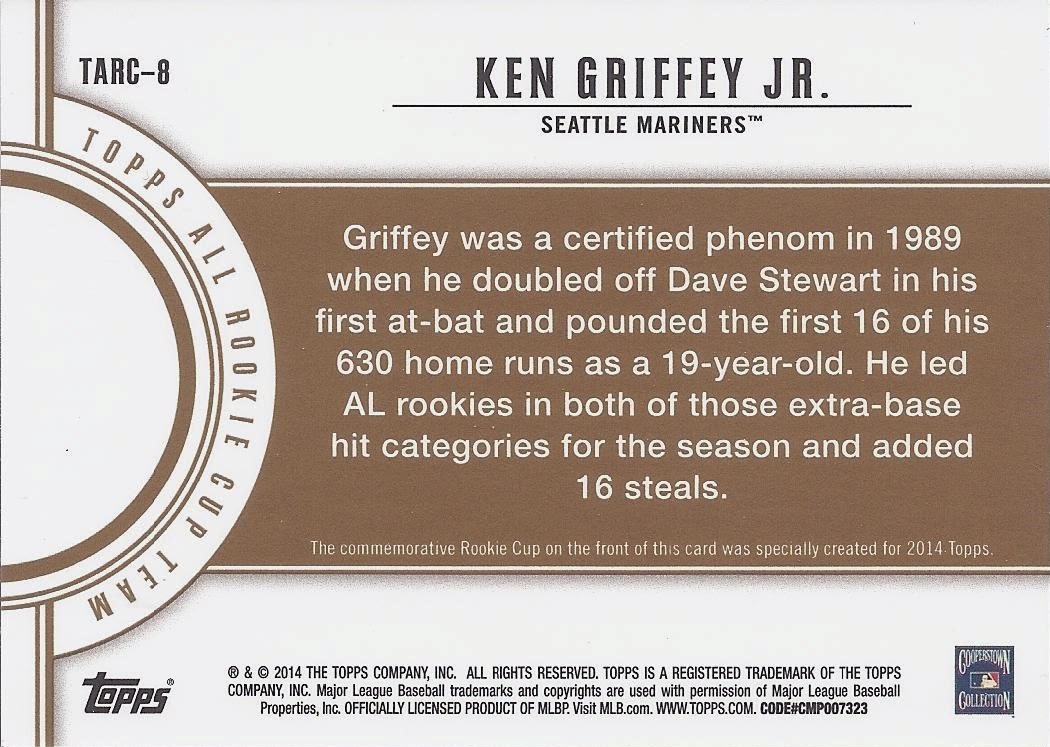 It’s little-known outside of the all but the most prestigious collecting circles that Topps used to issue rookie cards with a little metal rookie cups embedded in the card. Not so far-fetched an idea now, but in the 80’s? I first heard about these on Corey’s Tim Wallach blog and have become fascinated with the idea. I’ve never seen the Griffey as only a handful exist, rendering the card more or less ungettable. Maybe someday, but until that day this will have to do.

When first I laid eyes on this card I knew it had to be in the collection. There were only 99 produced, but a few well-placed bids later it was mine. It’s definitely on the short-list of greatest manu-relics ever produced. Then again…

So is this. Same card, same concept, super-insane relic. This is the thickest card in the Griffey collection. In fact I think it’s a stretch to even consider this thing a card. It’s more of a shadowbox frame with a really intricate mat. There are only 25 of these, so it took some patience and a nice chunk of change to land it. Worth it? You bet your sweet bippy. I consider this an excellent candidate for Griffey of the year.

The back is identical to the other Rookie Cup relic, but check out the black background in lieu of the sky on the other cup relic.  Neat.  I like the sky better, but neat. 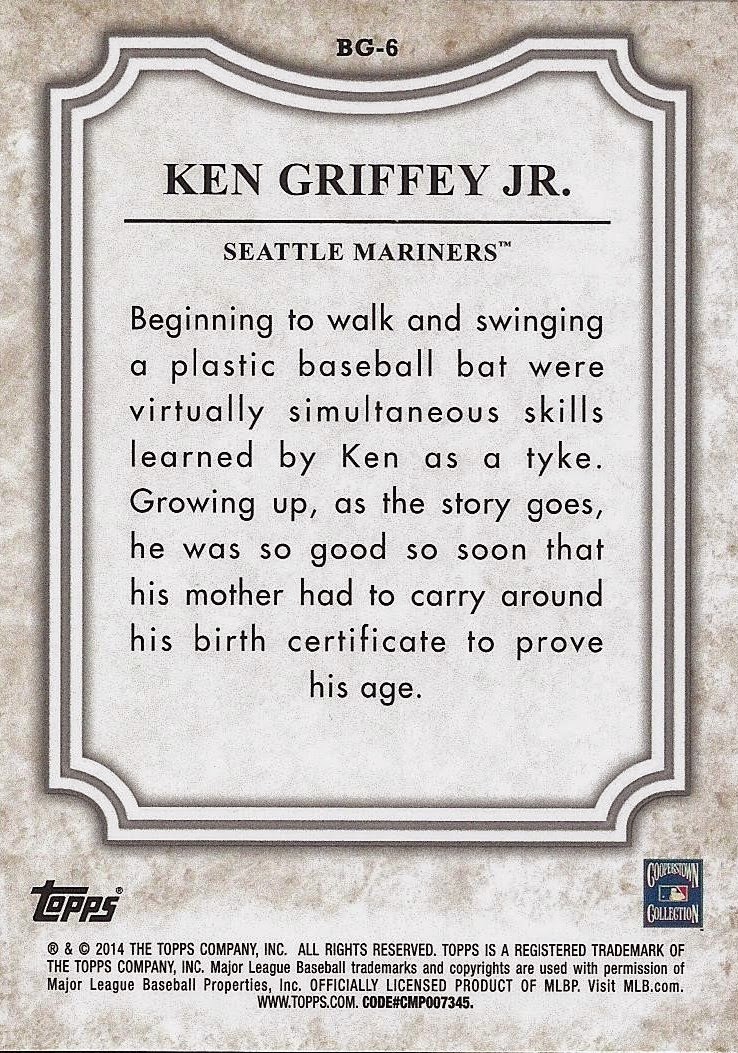 I’ve always sensed something wrong with this insert, but I could never put my finger on it until now.

Let me say first that everything about the card is great. Team color background, really nice borders, prominent banner, ivy running up the sides, big crown on top – combine all that with the tasteful thickness and high-gloss mixed with just the right amount of foil and you have a nice-looking card.

The blurb is solid, too - it’s different, it’s interesting, it’s even a little funny. One of the best Griffey blurbs of the year, no doubt.

The problem here is that there’s a disconnect between the design and the theme of the insert. It’s about the players as kids and in high school, right? That doesn’t cooperate with this design very well. It’s all fancy-pants and, as we say in the South, high-fallutin’. This card is an expensive candlelit restaurant. The blurb is a peanut-butter and jelly sandwich - tasty, but out of its element.

There is a gold foil version #/99 (that doesn’t look that much better) and a relic version #/25 (that I’m also not stressing over). 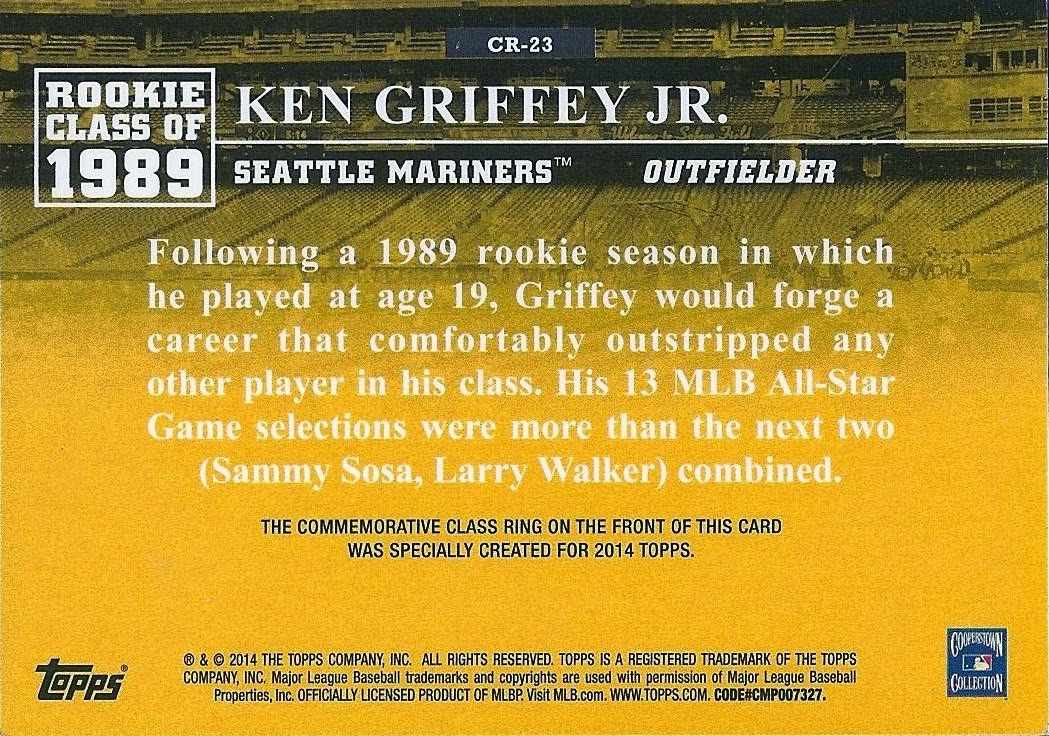 Here is yet another manu-relic in the form of a class ring – not the round finger part, just the top – for each player’s rookie year, like a high school ring. The relics themselves are made of metal, either silver or gold, depending on rarity. The golds are #/99.  And they scan real nice, don't they?

I love the idea here, and I’m sure the rarer parallels are amazing (gems and autos!). I only have the regular and first-level parallel. Nothing mind-blowing here, but they’re reasonably cool. I’d rather have seen a Moeller High School ring replica or something personal like that. Maybe next year. 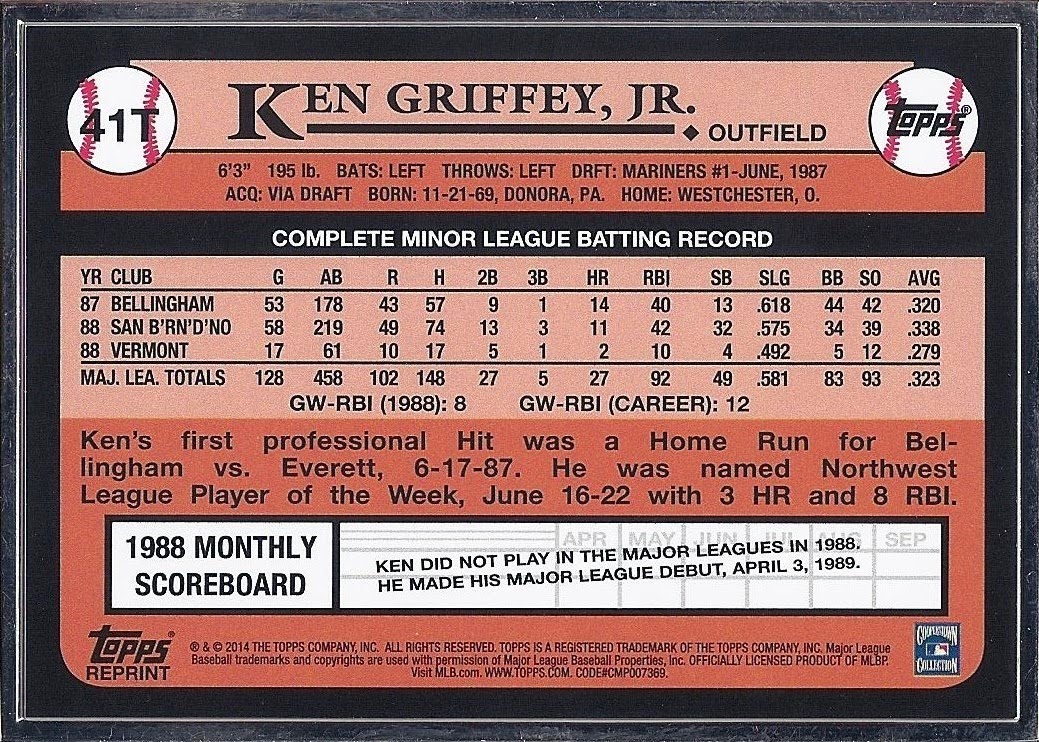 Now we’re talkin’. They reprinted rookie cards, framed them in metal, silver, and gold, and slapped them into hobby packs. I freakin’ love these things!

These silvers are #/99 and almost indistinguishable from the regulars apart from a slightly lighter-in-color metal frame and the card numeration. 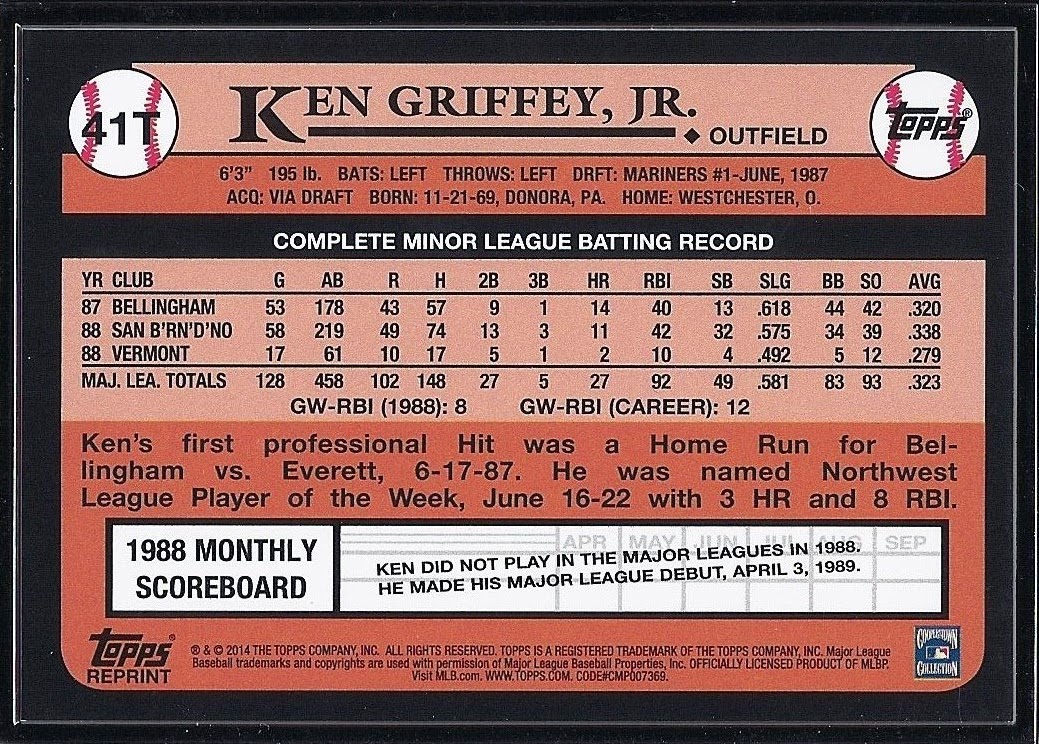 That would be the regular chrome border which is the color of hematite. These are #/199.  There is also a gold frame version #/25 that I want but have no intention of paying retail for.  Those things are priced way too high.

These bad boys are super thick, about as thick as an entire pack. They’re also tastefully glossy, beautifully printed, and a huge pain in the ass to properly store (ultra-thick top loader, extra-big penny sleeve, team bag). It’s funny that most of these sell for more than the actual rookie cards ever will, but that’s not entirely undeserved. Another fantastic insert.  And I suspect you could use them to hammer small nails into drywall. 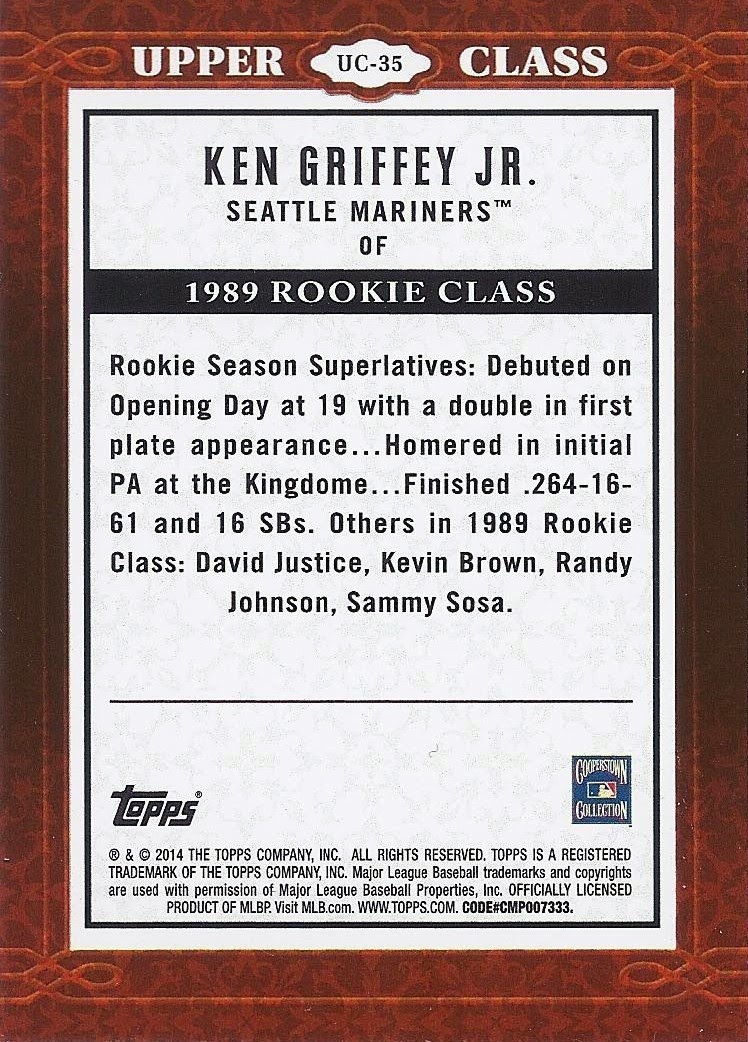 The fronts of these have borders in random colors and photos framed in black and gold foil. It’s not an ugly design, but it’s also nothing to write home about.

The blurbs on these list “Rookie Season Superlatives,” those being neat facts about each player’s rookie season that make them “upper.” I think the blurb outshines the design here.

This wouldn't be a card blog without a few complaints, and despite the treasure trove of Griffeys I do have a couple. I’m going to bring them up now and use this last card for reference, but really they apply to almost every insert in Series 1.

First, there’s a tactic Topps uses on every one of these cards (apart from the rookie reprint) that is kind of an eyesore. It has to do with the photography. They crop out everything but the silhouette of the player and replace it with a field of color or non-color or blurry sky or just freakin' gray as in the case of this last card. I don’t really see what the purpose is, but it makes me a little claustrophobic and cheapens the card. The slight shadow they add after the fact only makes it worse. Please stop this, Topps.  Natural backgrounds, please.

Another issue apart from the relentless recycling of photos is the close-cropping of those same photos. It brings the image quality way down. Take a close look at the last insert there – can you see the grainy, slightly Max Headroom effect? I’m thinking there was some digital retouching following the close-cropping. It looks unnatural, and it's on every single insert in this post except the '89 rookie reprint.  Seriously, go back and look at the pictures.  All of them look rough as can be.

That’s it for my complaints. I’m pretty happy with everything else, including the base set. Please keep the Griffeys flowing, Topps, and we won't have a problem.

Here are the Griffeys I am missing from 2014 Topps Series 1:

Coming soon, a look at Series 2. Thanks for reading.
Posted by The Junior Junkie at 8:30 AM