A Different Sort of Sort and a New Blog

As you might have guessed, things are a lot slower around here at The Junior Junkie. I’m not on hiatus or anything – there’s just a lot going on. I’ve had to limit my collecting to what the baby will allow me to do, and that has inspired me to start a few new projects that I can still do while simultaneously bouncing the little guy on my knee.

First, I’ve begun a major digital sort. This is a time-devouring, multi-tiered project that should promise big payoffs in the end.


The plan is to scan every Griffey I own, front and back, beginning with the seven 4” binders that comprise the bulk of my Griffey collection. This part I’ve already begun, and I can tell you that the actual scanning is taking a very long time. There are just so many pages, guys; and I scan at 300dpi so it takes a little longer per page. I do it on random nights when we have nothing going on - I just put on a movie in the Griffey Cave and scan away. After a few random weeknights of work I’m only through two of the seven main binders. And when those are complete I’ll begin scanning everything else: jumbos, micros, off-size cards, pack wrappers – thing like that.

After that, I’ll edit and label each card front and back, then put them into appropriate folders sorted first by year, then by brand and sub-brand. Once complete, the only cards I will need to scan will be new additions and any non-Griffey cards. With that done I’ll hardly ever have to crack the binders again when making posts. Finding time to scan and edit will no longer be a challenge, and I’ll just have to focus on research and writing (the fun parts). I consider it an investment in future blogging. 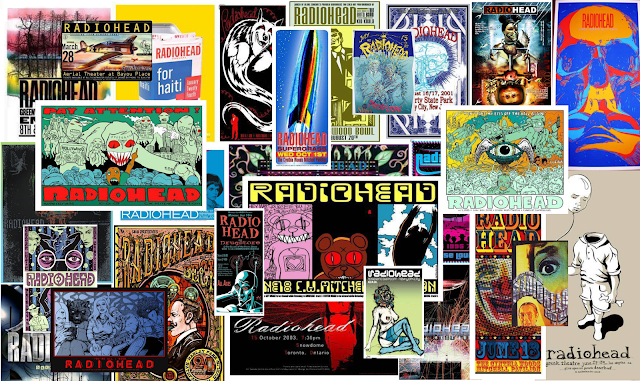 Climbing Up Your Walls: the Radiohead Poster Blog

I’ve been wanting to do this for years. There are a few niche collections I’m way overboard about, and the two I am overboard enough to blog about are Griffey cards and Radiohead posters. Plus I already have a pretty complete photo record of my Radiohead poster collection, so all I need to do is put together a few sentences and information for each one and slap it up. I’m already up to nine posts, and most of those I wrote in a single night.

I write these blogs because they are blogs I would want to read. Every couple of months, it seems, I try and Google a good Radiohead poster blog, and I invariably find poster blogs and Radiohead blogs, but none that specialize in both. It was up to me to fill the gap in the market.

Now, I still owe a lot of trade posts to a lot of nice folks, and I will get working on those very soon (I have a bunch of time off work in the coming weeks). I also have some set-specific posts waiting in the wings and the return of Griffey Frankenset Fridays which I was hoping to continue even after the baby, but it just didn’t happen.

Oh, and we’re having a big house party on Friday. You are all officially invited. I’m not kidding. Come to New Orleans – I’ll even pick you up at the airport. Let’s get drunk and talk about cards (or, you know, Radiohead posters). The couch pulls out…
Posted by The Junior Junkie at 10:56 PM 12 comments:

In Defense of the Stamp: 2016 Topps 65th Anniversary Buybacks 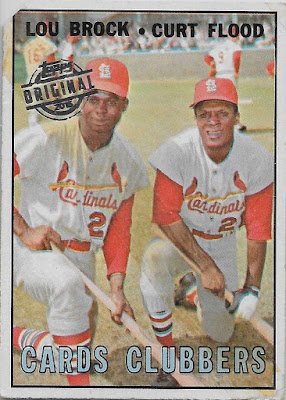 I like stamped buybacks, okay? I know a lot of folks don’t, but I’ve never hidden the fact that I can’t get enough of brands reminding us about all the massively overproduced cardboard they gave us when I was in my formative collecting years. And the fact that these are the genuine article as opposed to inserts a la Berger’s Best or Cards Your Mom Threw Out makes it even more fun.

But regardless of how you feel about buybacks, there remain a few mysteries with this insert, one in particular that’s bothered me since I first heard about the new-for-2016 tiered stamp system.

First, here’s what Baseballcardpedia says about the 65th Anniversary buybacks:

“As an added twist, each buyback has a foil stamp that is color-coded with differing tiers of scarcity.

The color codes in order of most to least common are:
Black (most common)
Red
Blue
Silver
Gold (one-of-one)”

From the moment I first I read about how the tiered stamps work, something bothered me. What were the criteria that decided what stamp color each buyback received? How do they quantify this?

Is it based on the scarcity of the stamp itself? In other words, did Topps stamp so many of a specific card silver, then more in blue, more in red, and the most in black? If so, does that mean you can pull the same card in multiple stamp colors? Are there stamp color rainbows?


Or is it based on desirability of the card? As in popular players like Nolan Ryan and Tony Gwynn got all the silver and blue foil while the Pat Sheridans and Chris Bandos of the world got stuck with red and black? If this is the case, which cards got which stamps had to have been based on somebody’s gut feeling. So who made those calls?

It turns out both of these are kind of right. 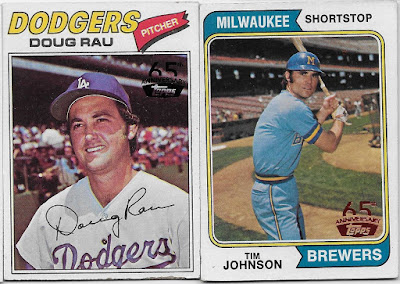 Go on COMC and search “2016 Topps 65th” and any of the foil colors, and you will see a parade of answers.

Black: overproduction-era commons, mostly from the ‘80’s and ‘90’s
Red: commons almost exclusively from the ‘70’s with a few semi-stars mixed in from all decades
Blue: 70’s commons plus your bigger stars such as your Jeters and Ripkens
Silver: dime-box-grade or better cards of popular stars with a few inserts and autographs mixed in
Gold 1/1’s: stars or lovely vintage base cards from the 60’s.

Based on the sample from COMC, we know the stamp system is based to some degree on the desirability of the card itself, but the criteria for each tier still seem awfully loose. I would guess there is a room full of people at Topps HQ in New York sifting through boxes of cards and putting them into one of five bins for later stamping. My guess is the decisions are made quickly and based on personal whim.

Allow me to show you why I think that. Ladies and Gents, my secret shame:


That's FOUR TIMES the same card received two different stamp colors. Are there reds of these same cards to be had? Golds? I’m not sure. All I know is that whoever sent these cards to be blue-stamped should be fired. Silver or bust!

And Lord help you if I find out you red-stamped a Griffey.


Yeah, I've been scooping them up like free samples at a Baskin Robbins. Don't judge yet - instead, allow me to try and defend my love of buybacks to you.

First, there are people out there who prefer inserts such as Berger’s Best and the popular Cards Your Mom Threw Out in lieu of stamped buybacks. My response to this is: WHY? Here’s the real card with a stamp to commemorate it. It’s not a ’52 Mantle. Nothing is being ruined forever here. There are 500,000 copies of some of these cards floating around, but this one is special. Why is that worse than a reprint with an ugly back?

On top of that, value in this hobby, especially when it comes to popular players, is based on scarcity more than anything else. So the question becomes how many of each card made it out into the world through buybacks? Are there 100 of that 1990 Topps #336 to be had? Or ten? Sure, there are 1/1 gold stamps, too, but even for the tougher colors I can’t imagine there being that many. I would guess that it’s probably something like a handful of each issue. Congratulations! That’s one rare… 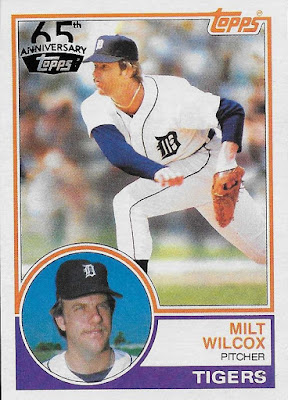 These are not unlike those unnumbered 2015 Stadium Club First Day Issue cards. There were no clear production numbers, and then someone figured out that there are actually just seven of each card and suddenly everybody wants them. I recently paid $15 for a #/99 Griffey (high, but I really wanted it) and $5 or less for most of these buybacks. There’s no way there are 99 of each of these floating around.

I believe those foolish enough to appreciate stamped buyback junk wax (e.g., yours truly) are getting a lot of bang for their buck.

Oh, and if I was the guys at the Topps factory whose job it is to stamp the buybacks, I would sneak so many other Griffeys in to get stamped. O-Pee-Chee and Tiffany versions, random overproduction-era commons from every brand, and maybe even a few ’89 Upper Deck rookies. Now THAT would be some crazy backdoor action.
Posted by The Junior Junkie at 10:49 PM 13 comments: