A Set So Nice They Made it Twice: 1995 Collector's Choice SE 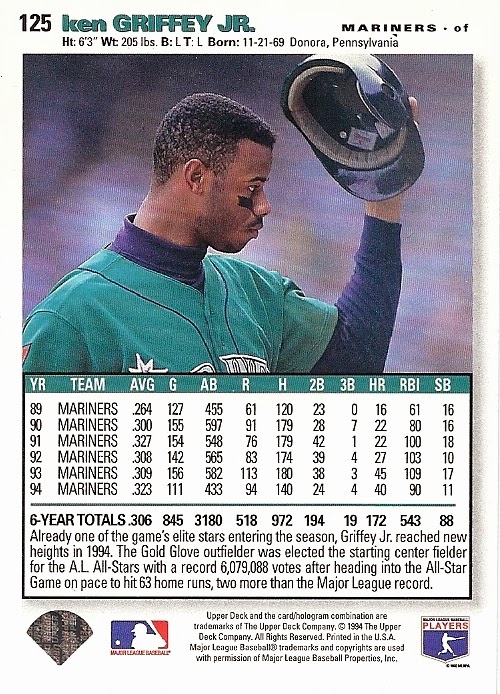 In my collection: dupes of all but the gold signatures

Is this a good Griffey card? Yes.  A rare mid-baserunning portrait from a fan favorite set of the '90's.

The set: I know I usually poo-poo sets that seem indulgent and unnecessary.  I'm not getting soft, I swear.  There are plenty of sets out there that just didn't need to be made and they will have my ire.  But this is not one of them.

That being said, this is the second set in the same year released under the Collector's Choice banner, and it is perfectly awesome.  Perhaps it had to do with the strike or perhaps the brand's inaugural '94 set was a big commercial success because Upper Deck added this Special Edition with a slightly higher price tag and a little bit more foil for the kids.  They also expanded the silver/gold signature parallels to incorporate the border which looks pretty cool, especially on the golds.

They also kept the stellar, often quirky photography to which we collectors had grown accustomed.  The card back design is nearly perfect and the simple two-level parallel and low price made CCSE a joy to buy and a breeze to collect.  Everything about this set is fun and easygoing.

Here are a few from my personal keeper box: 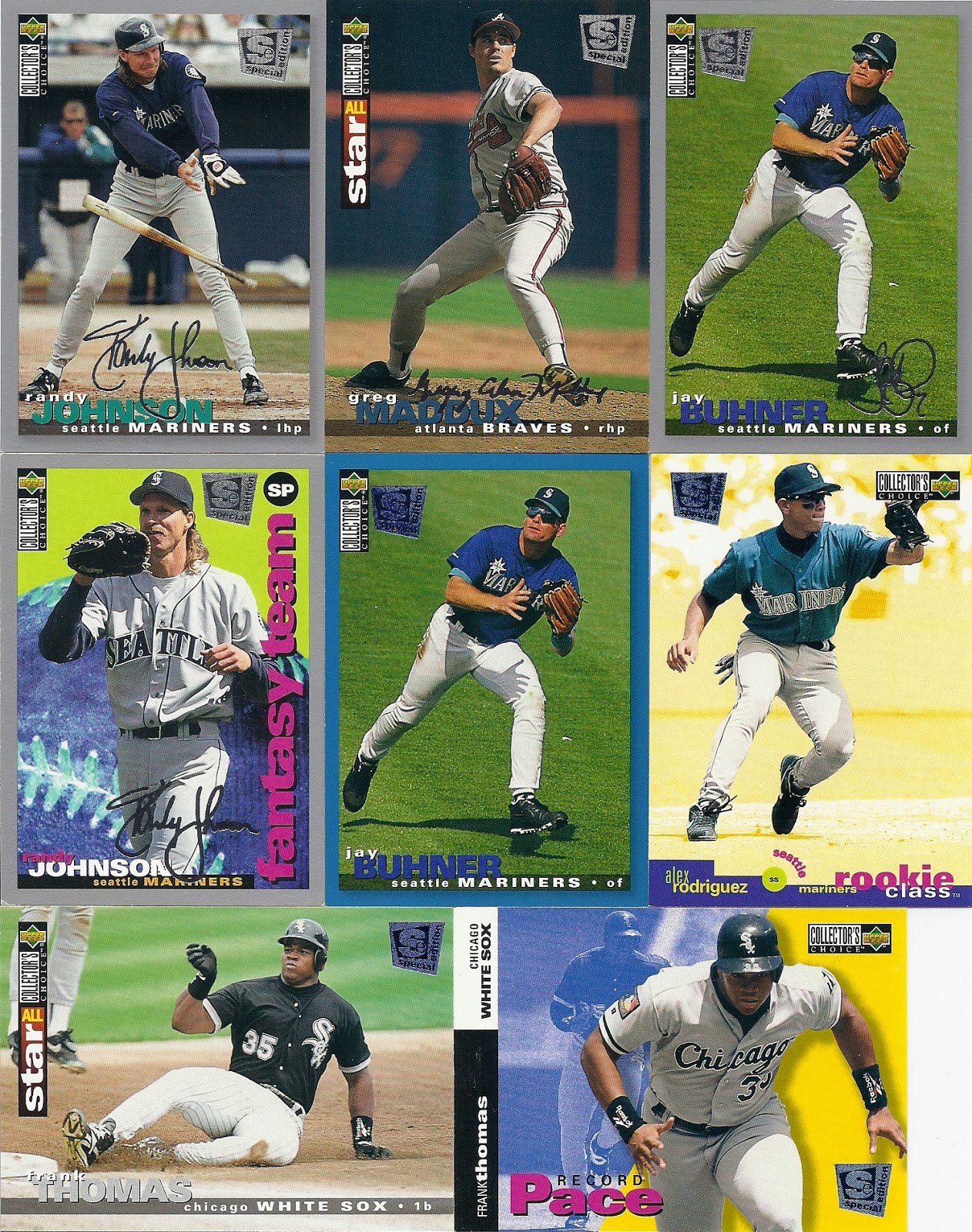 If that Randy Johnson batting card alone doesn't make you make you love this set, you don't like baseball cards.  The one-armed Maddux is framed beautifully as is Buhner in the outfield.  The Fantasy Team subset is pretty cool, too, despite the fact that Griffey is not included.  And that is, admittedly, one of the ugliest A-Rod "rookies," but the Rookie Class subset itself isn't half bad.  I remember pulling a dozen or so of the Jason Isringhausen. 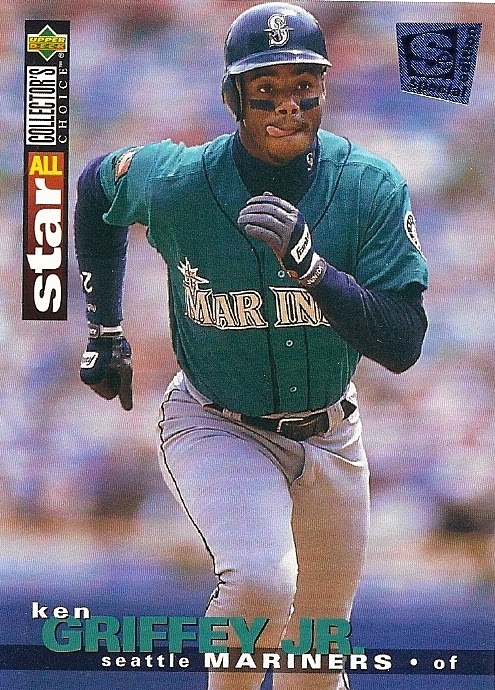 This photo reminds me of an old joke: a guy walks into a bar hoping to meet a lady, but he quickly notices that all the women in the bar are crowding around one man at a table in the corner.  So our guy goes to the bartender and asks, "Hey, what gives?  How does he get all the ladies?"  Then the bartender says, "I don't know.  Every night he just sits there in the corner, licking his eyebrows."

Despite how tongue-tastic this photo is, a shot like this is uncommon on a Griffey card.   It's so up-close for a running shot and can almost be described as a portrait.  And is he stealing a base?  I mean the guy's no slow-poke, but we just don't get to see that very often.  Well done.


The card backs of the parallels are identical to the regular base cards.

While not making an appearance in the Fantasy Team subset, Griffey is the first non-rookie card in the set in the Record Pace parallel: 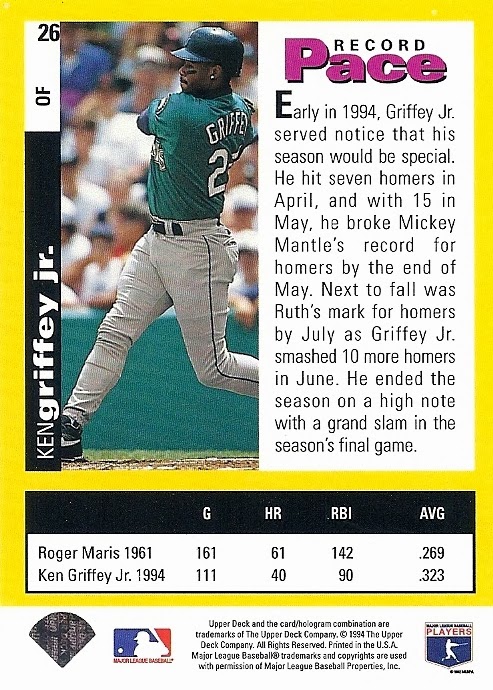 Bright primary colors made these cards appear to explode out of the pack.  It's a fun design with multiple action shots per card, but only five players were given cards in this subset for some reason.  I would like to have seen more.

Here is the parallel:


A well-designed checklist rounds out the Griffeys of this base set: 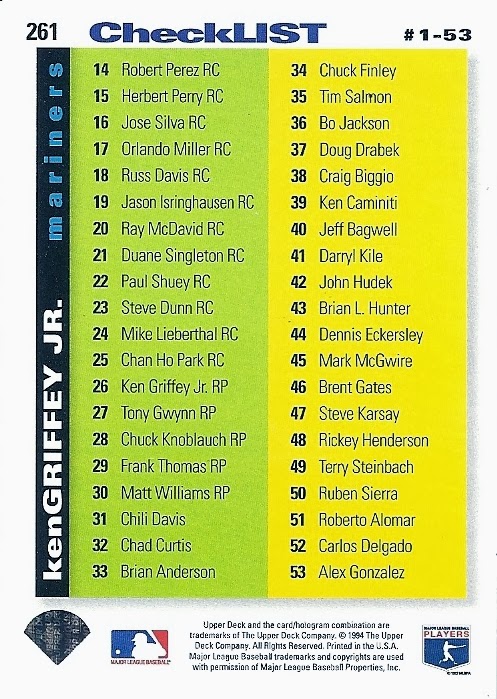 Since Griffey got one of the borderless All-Star cards, this is the only one of his cards with a blue border (and silver and gold, if you're lucky).  All three look amazing with the grainy black & white photo.  These are among my favorite checklists ever made.

The silver signature looks even better:

According to the checklist, there are only nine total Griffeys to be had here, but you know I'm not one to stop at the regular checklist.  Like a truffle pig I nose out my quarry and unearth those obscure Griffeys that the checklist omits.  Don't get too excited, though.  It's just a promo: They got it pretty close - just remove the border and add the little All-Star box and there's the base card.  The regular Collector's Choice Promo wasn't even close: 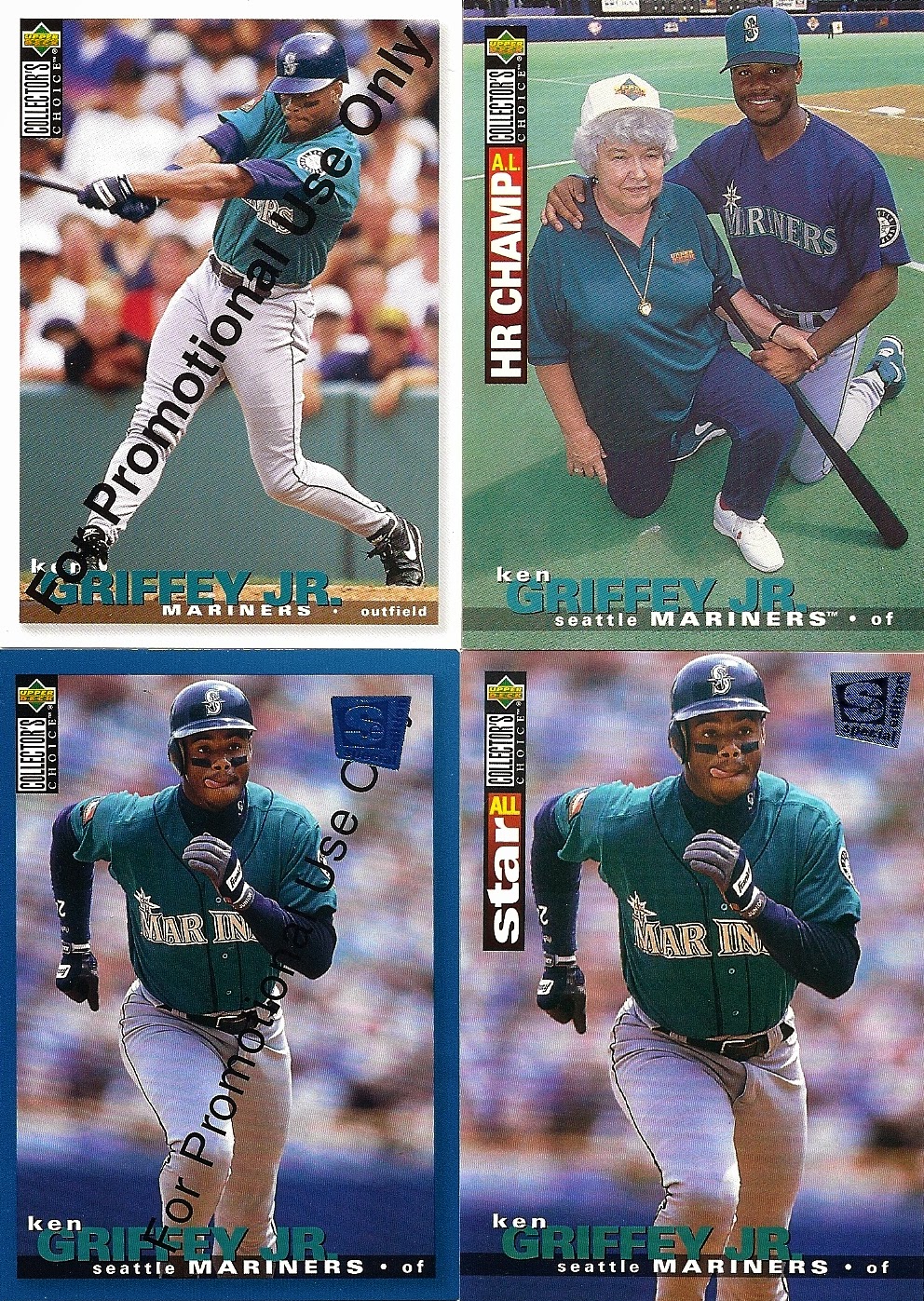 Everybody loves the Collector's Choice brand, particularly from '94-'96.  I would like to see another quirky, low-cost brand with different photography (looking at you, Topps).  Let's get a petition started or something.  Come on, card makers! 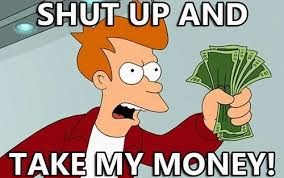 Now in the interest of my own anal-retentiveness, here are a bunch of side-by-side comparison scans.  Enjoy!

Today is my first ever snow day.  People are calling it "sneuxpocalypse."  Not good people, but people.  So, I ran to Wally World this morning to pick up some beef jerky and to check for early stocking of 2014 flagship.  And wouldn't you know it? 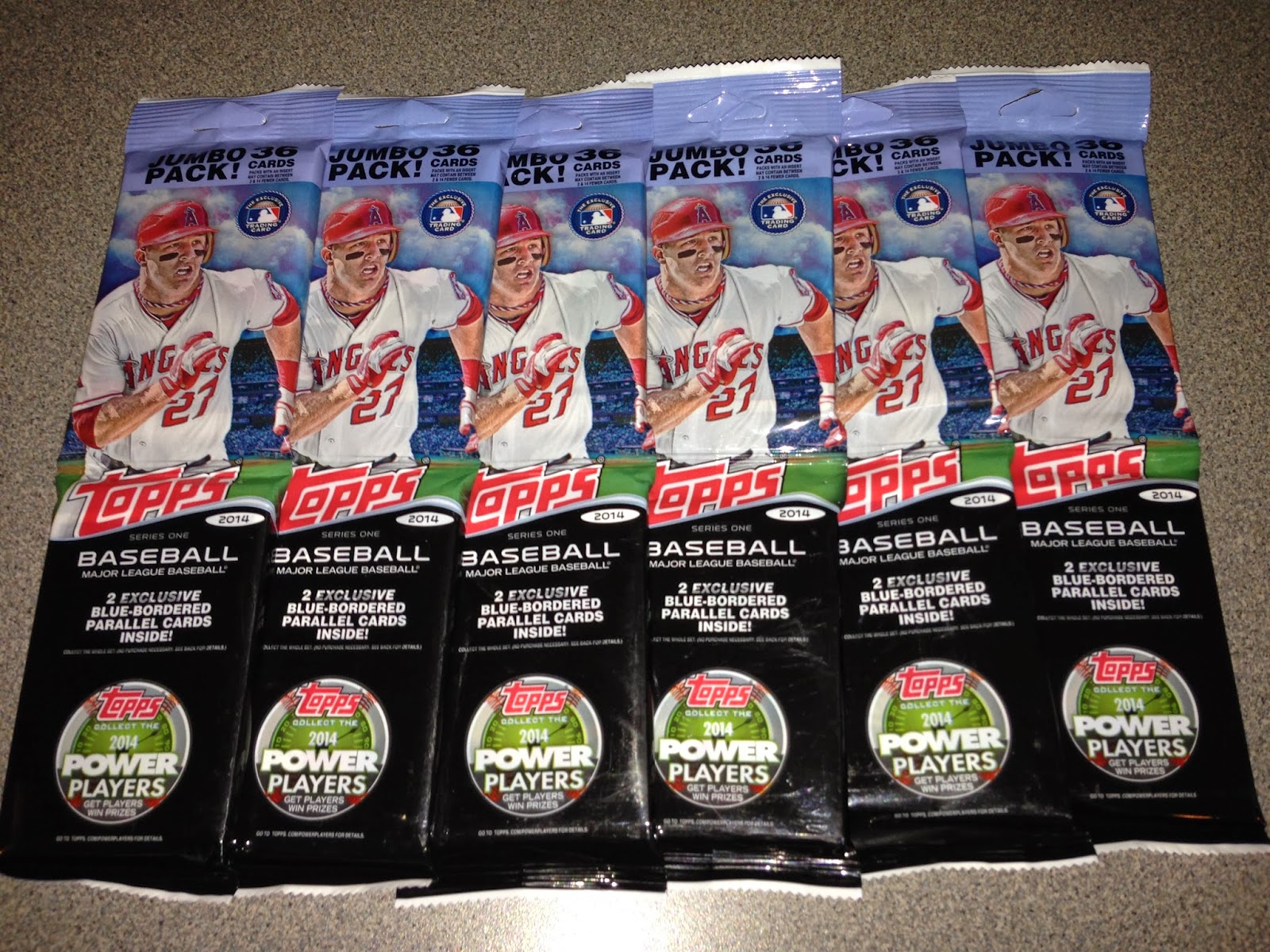 No blasters, packs, or hanging boxes; but plenty of these.  Here's what I got, starting with the base cards: 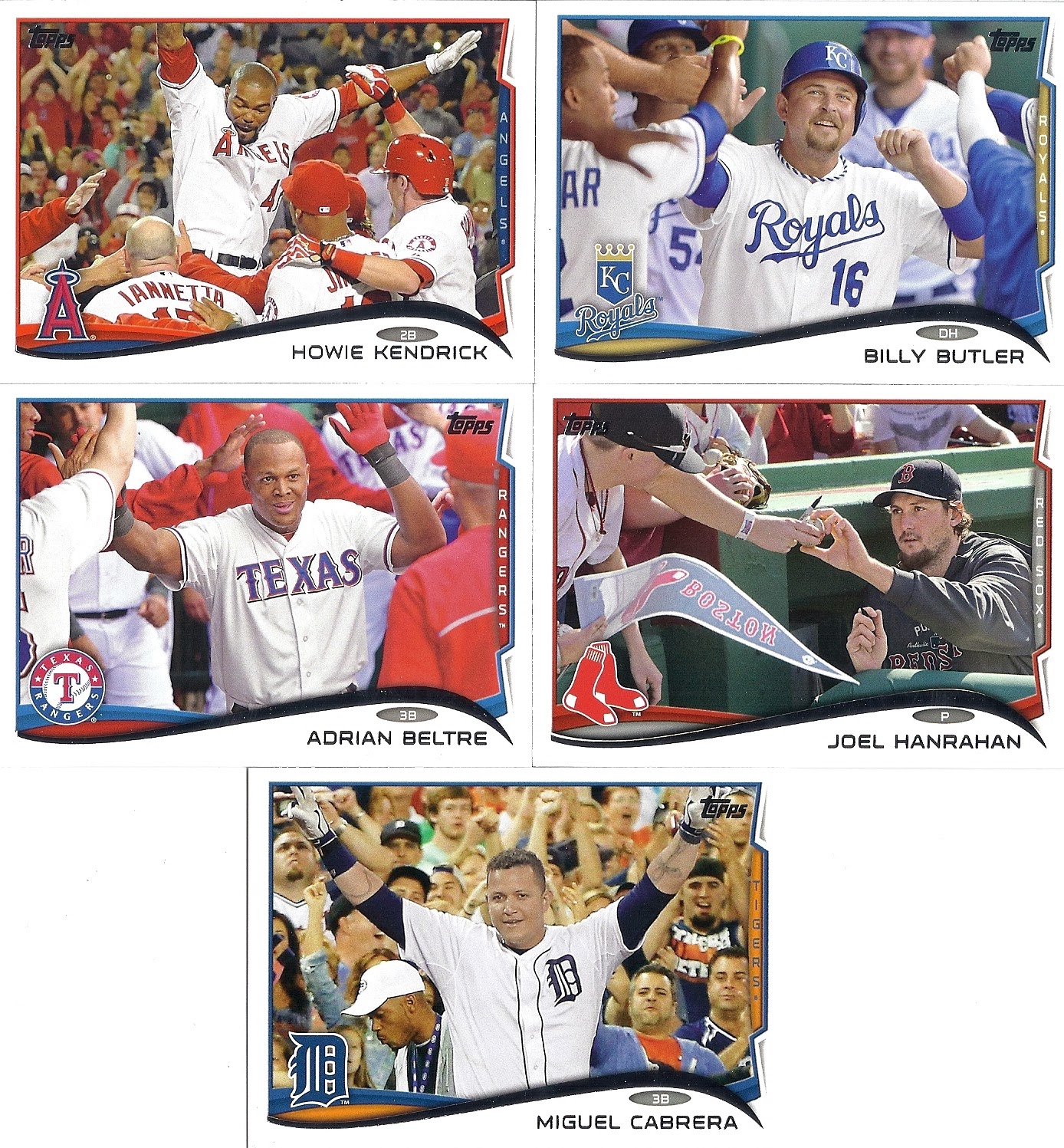 A lot of celebration and autograph shots in the new set. 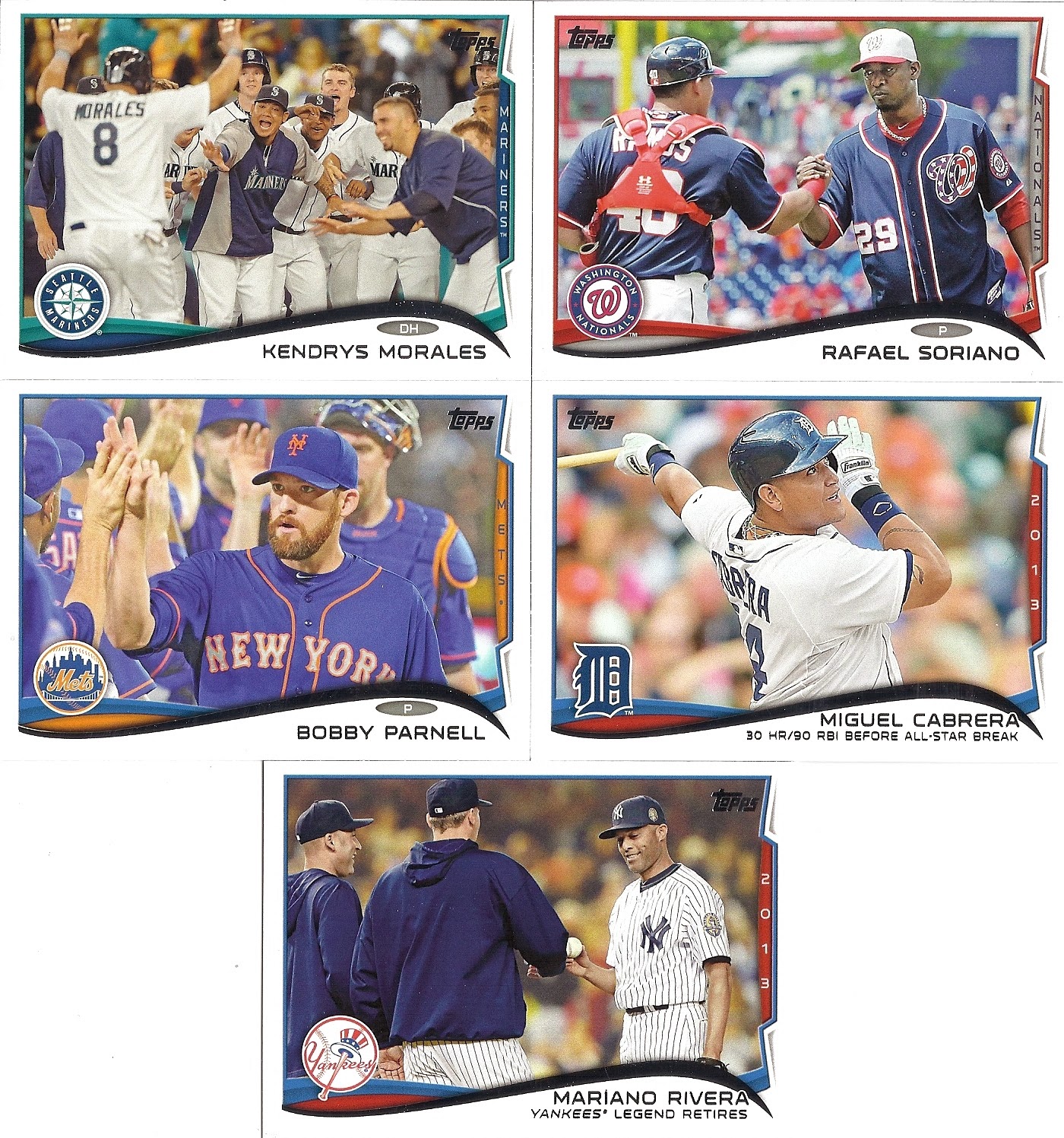 Sure that Kendrys Morales card is not showing his face, but it's a great shot.  And how great is that Rivera card? 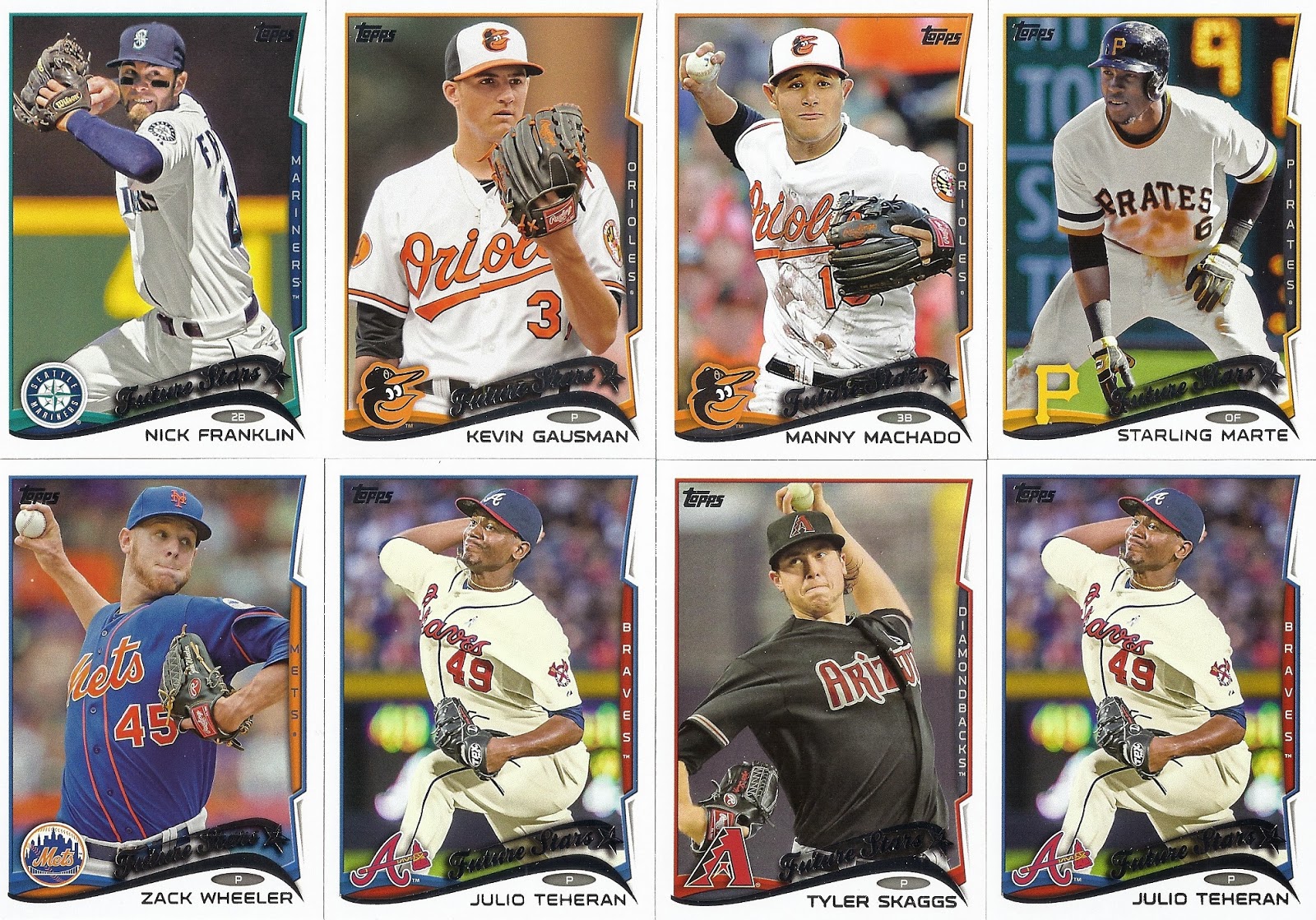 I really like the return of the Future Star stamp. 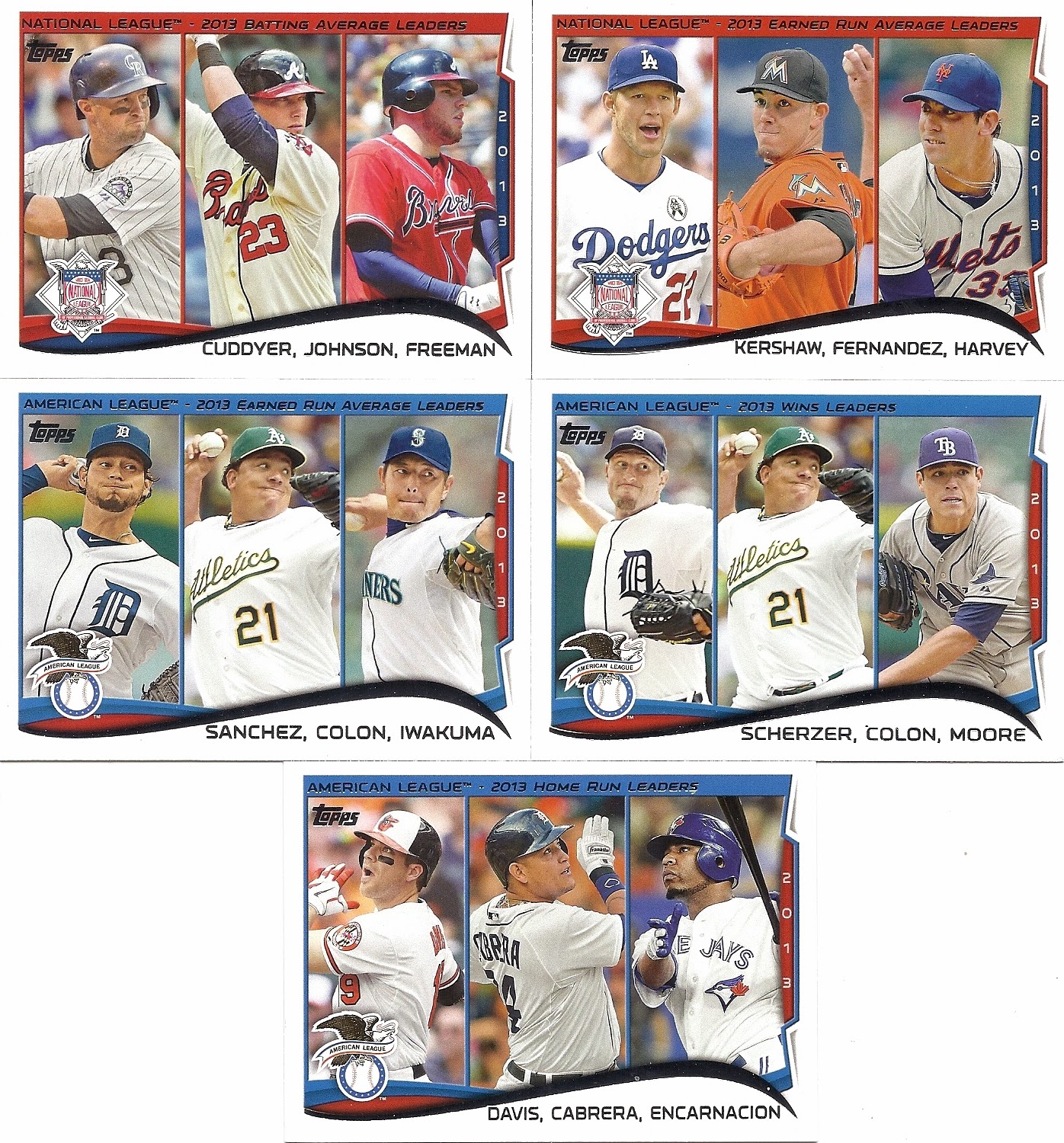 I'm so used to a line of text below the names - these seem empty without it. 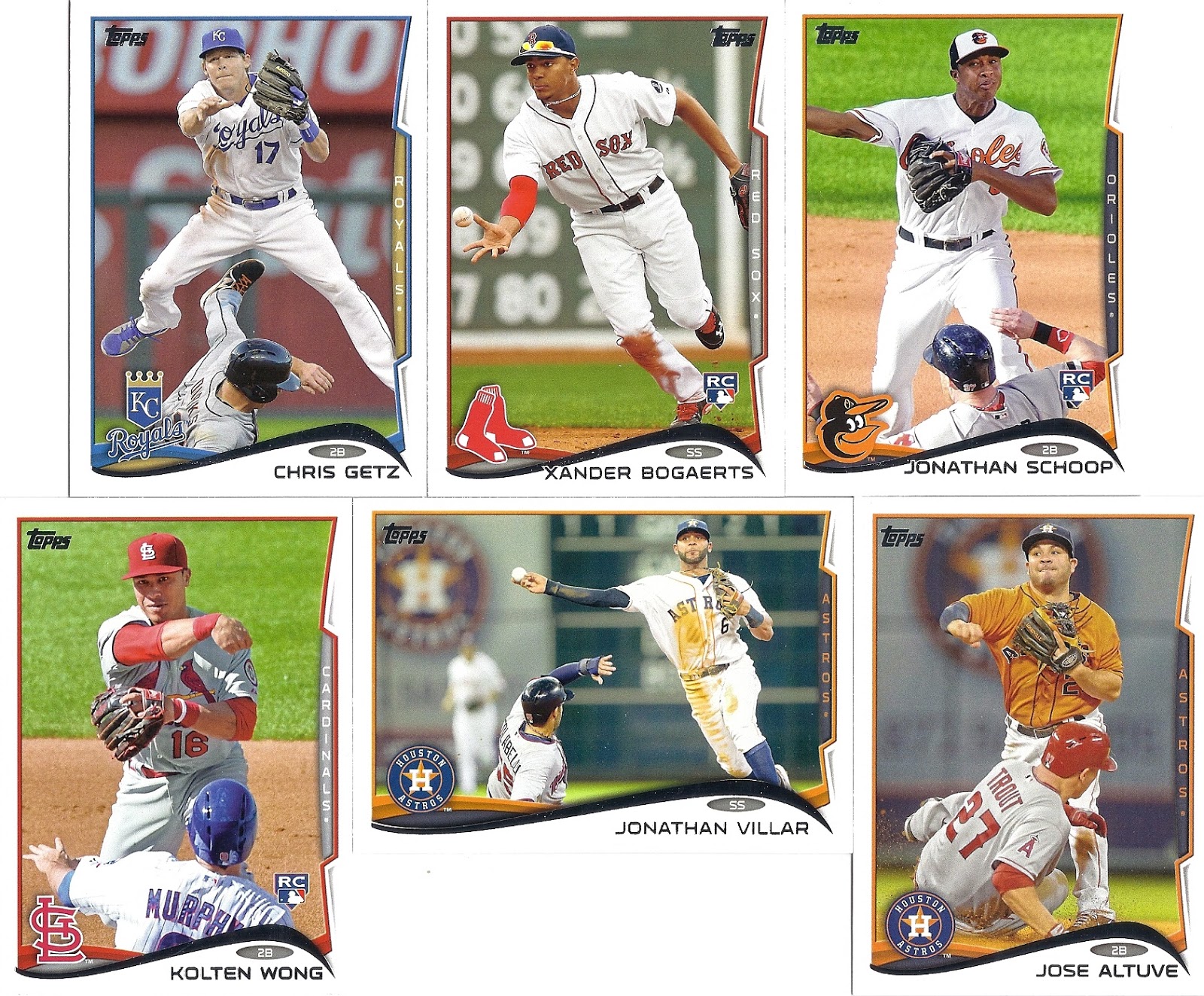 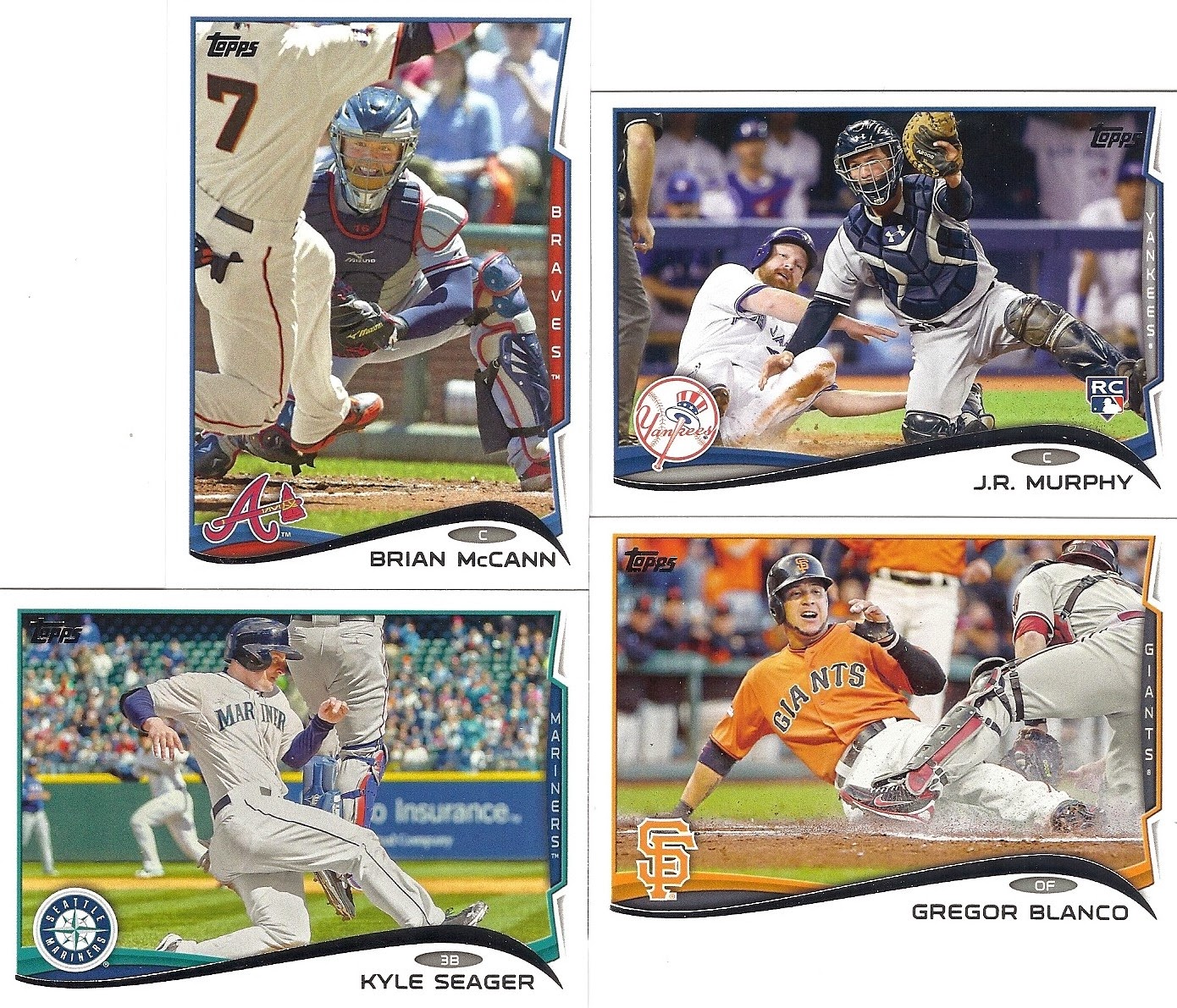 ...and some excellent plays at the plate.

I don't know what the SP theme is this year, but I'm hoping it's tongue-shots.  If that's the case, here are three. 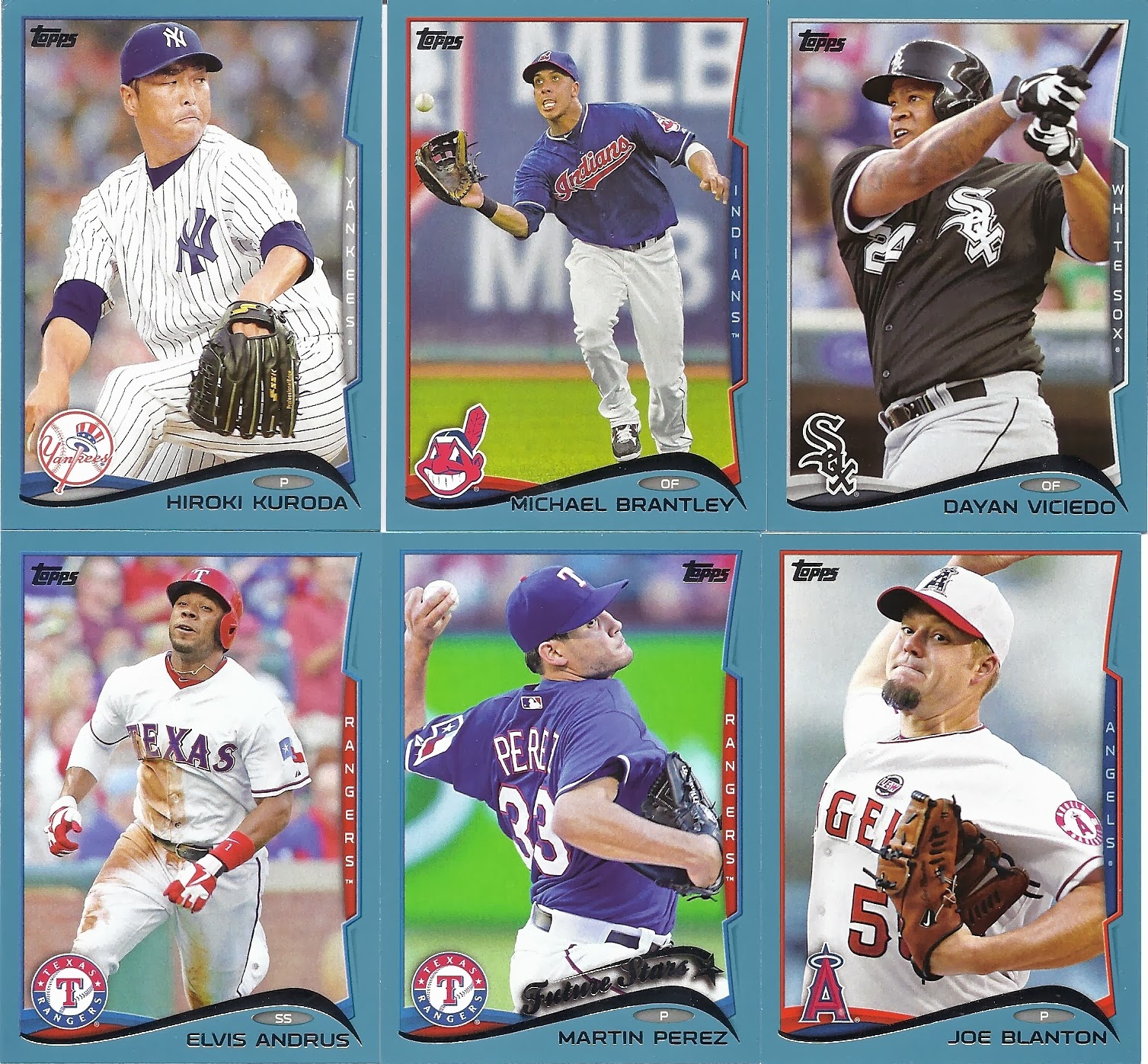 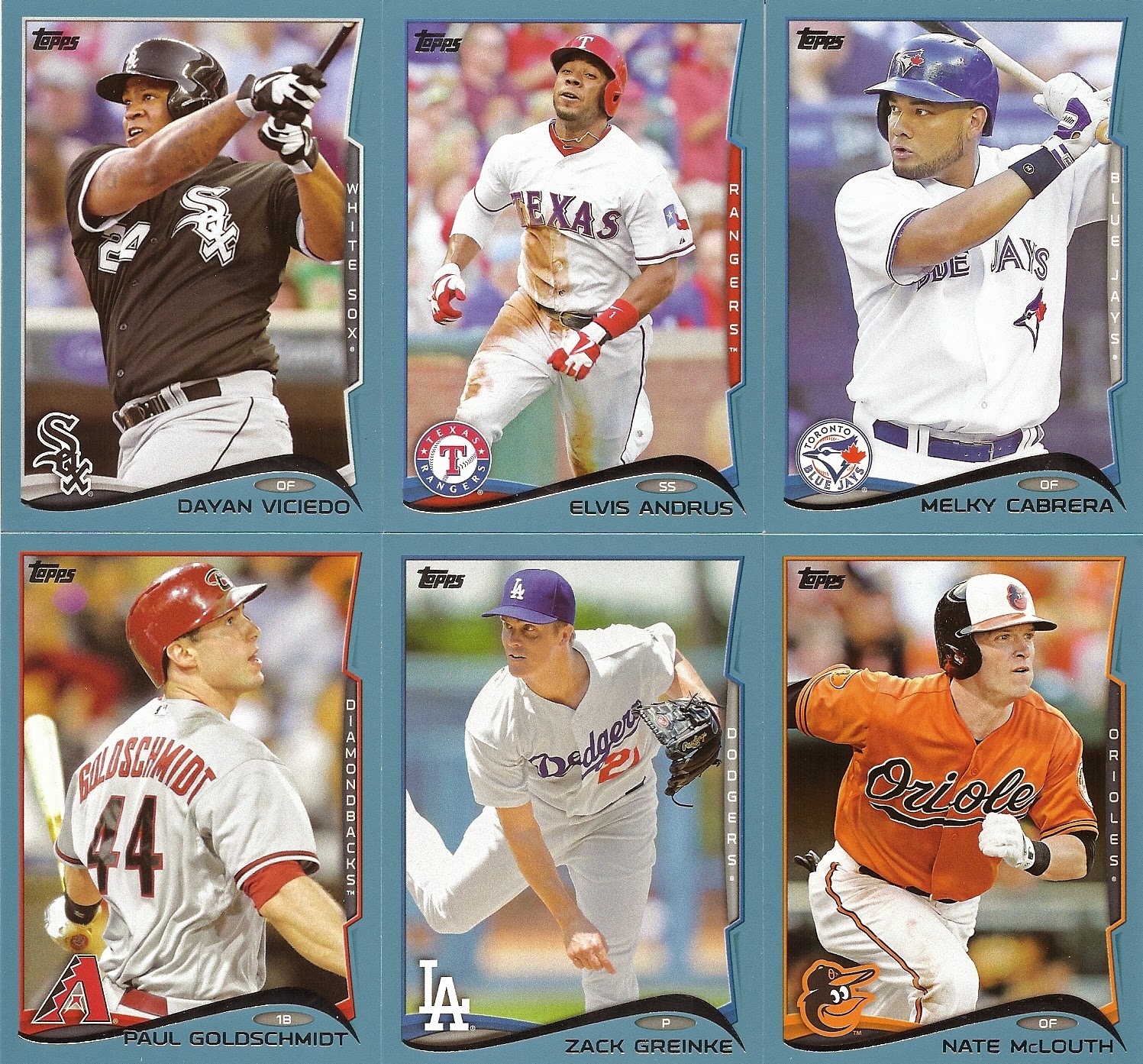 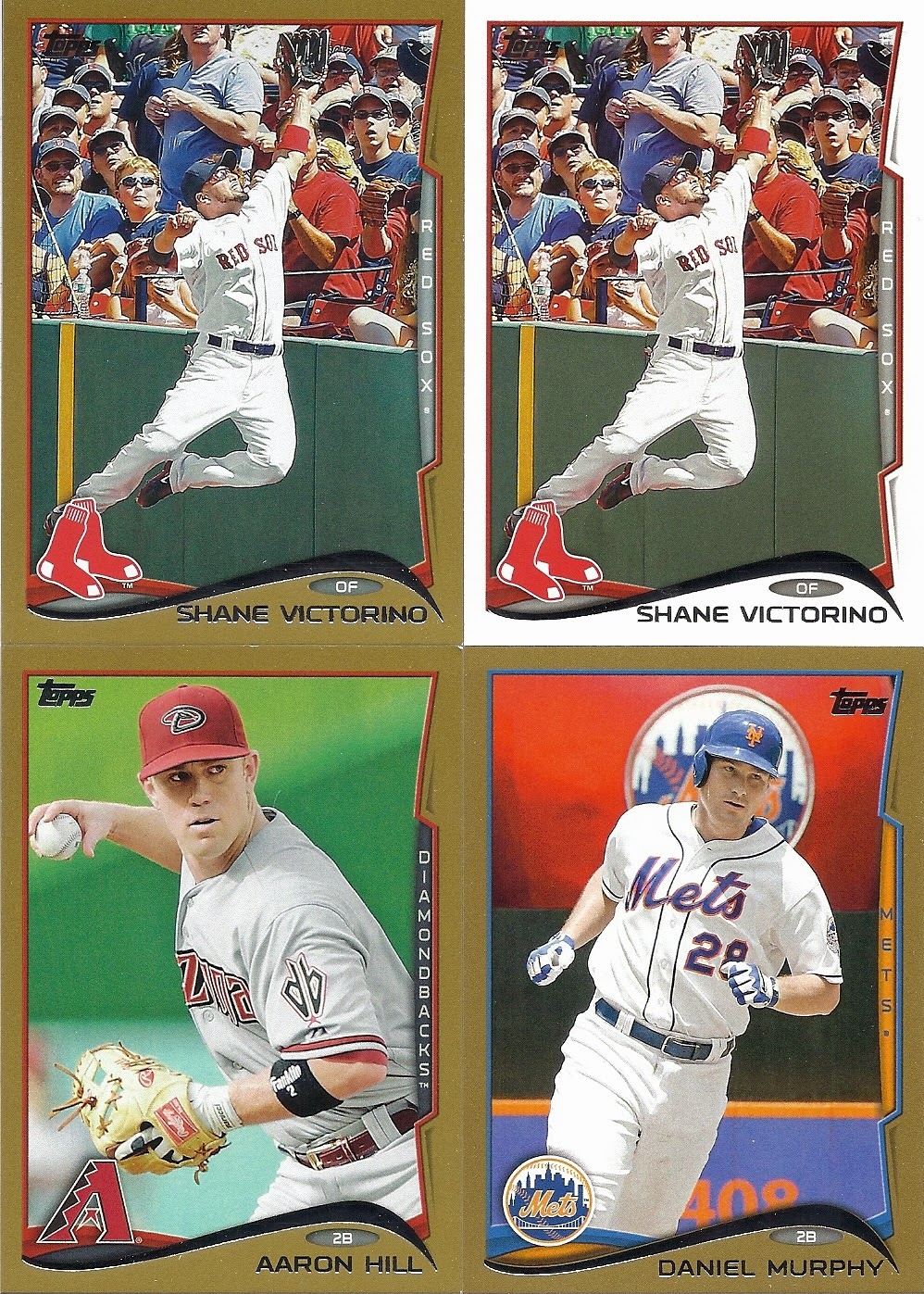 A couple of serial-numbered golds, too. 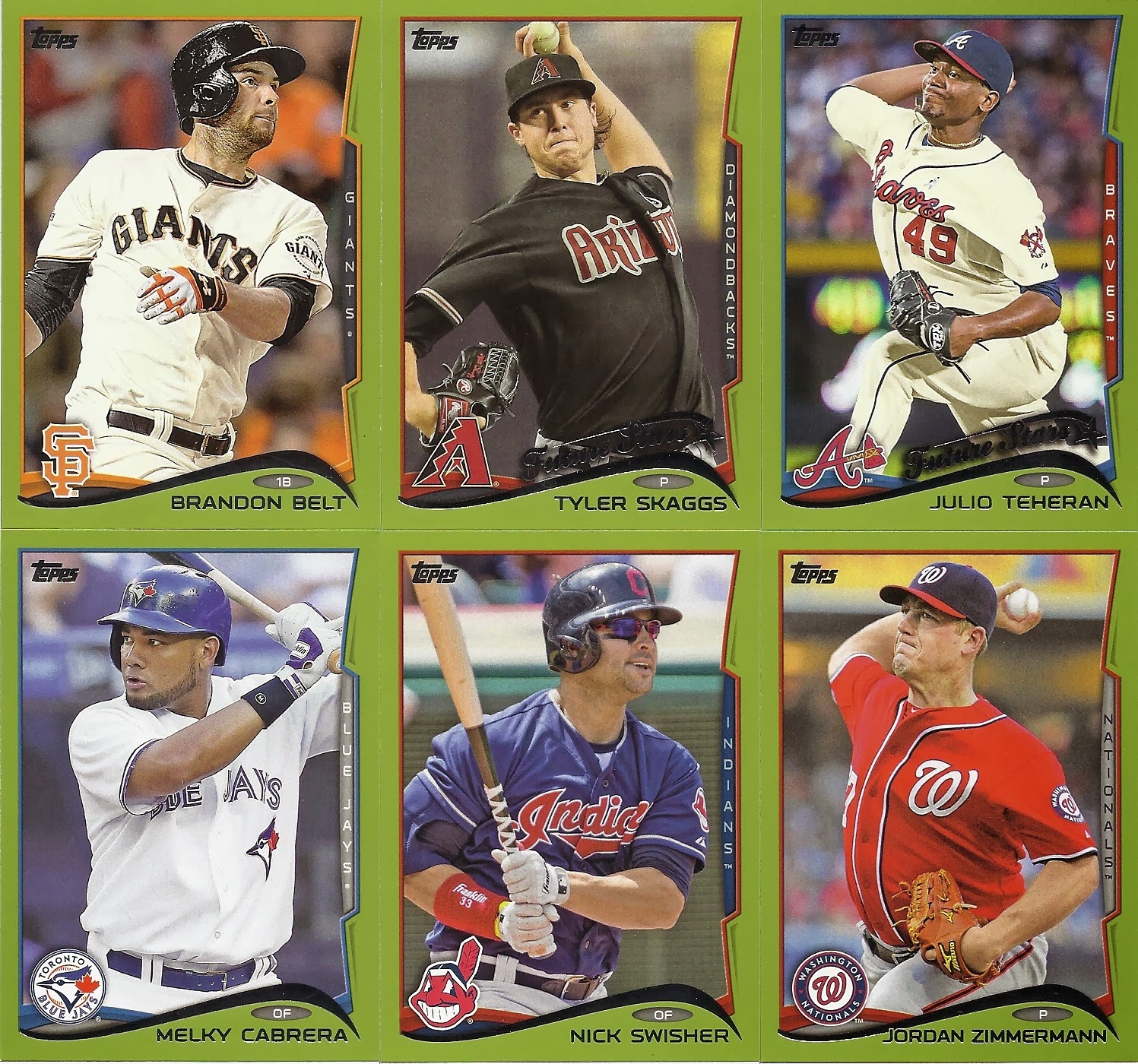 Plenty of limey parallels, too.  I didn't know this was a thing. 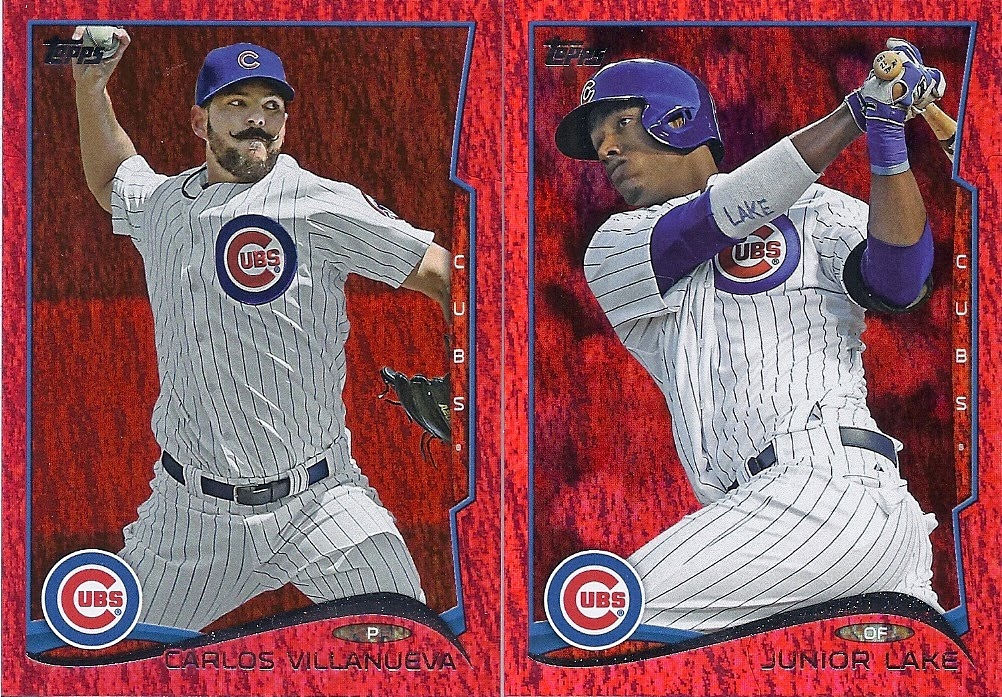 These sparkle pink parallels look to have replaced the spinach of 2013.

I love the Super Veteran insert, but I seem to remember the original '83 SV cards featuring players that have more years under their belts. 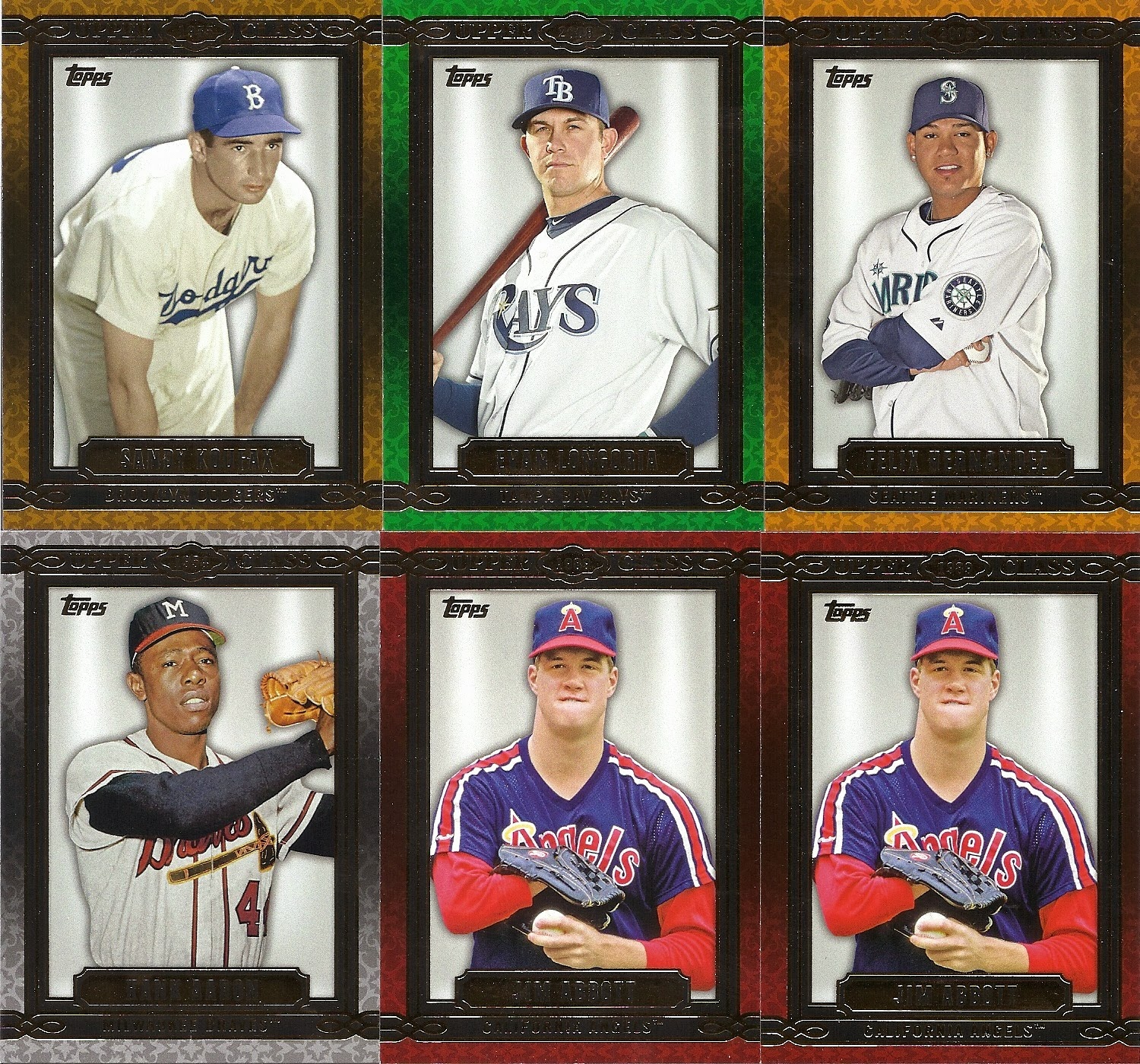 Good-looking insert.  I like the color-coding here which is repeated on the backs. 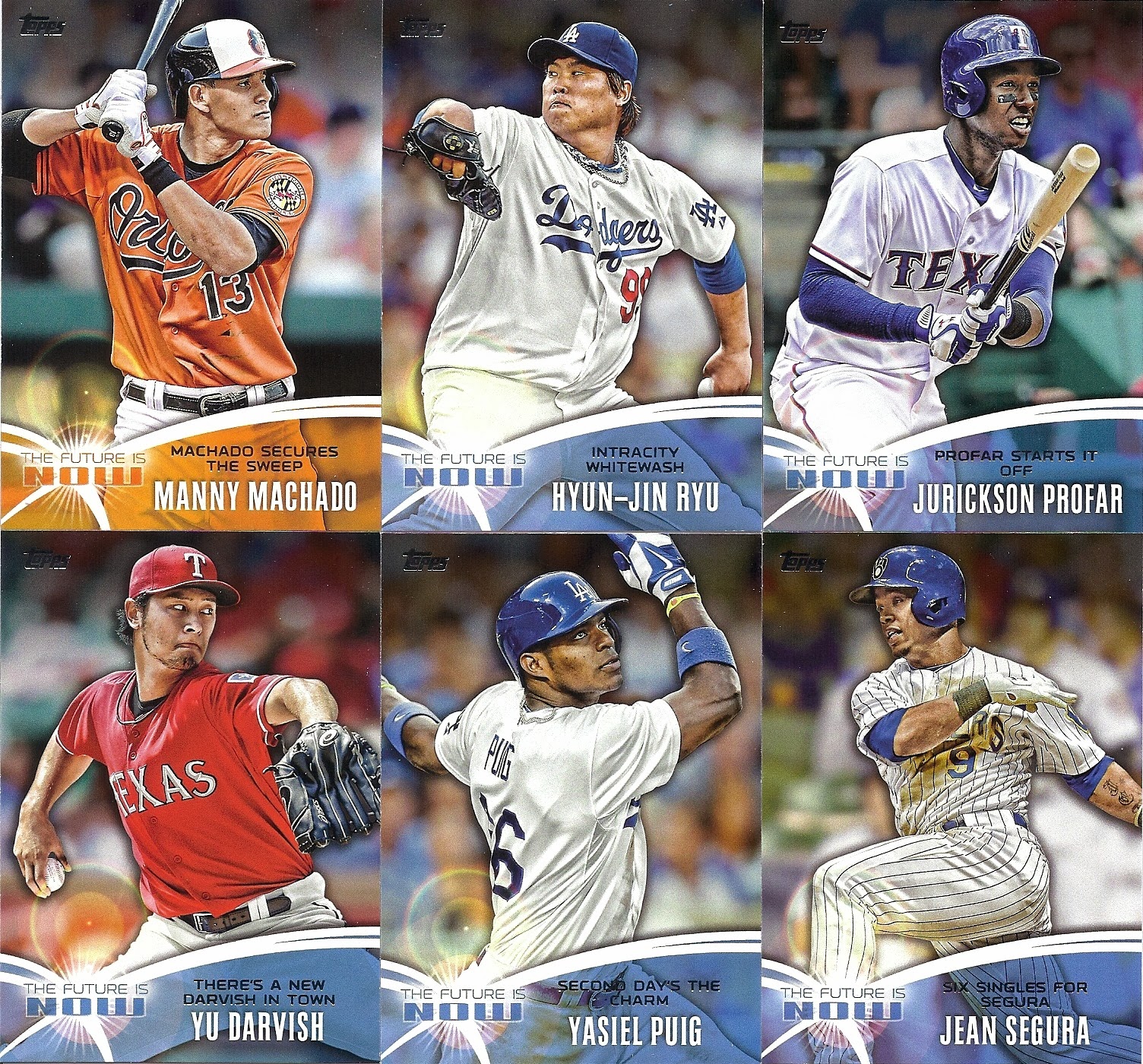 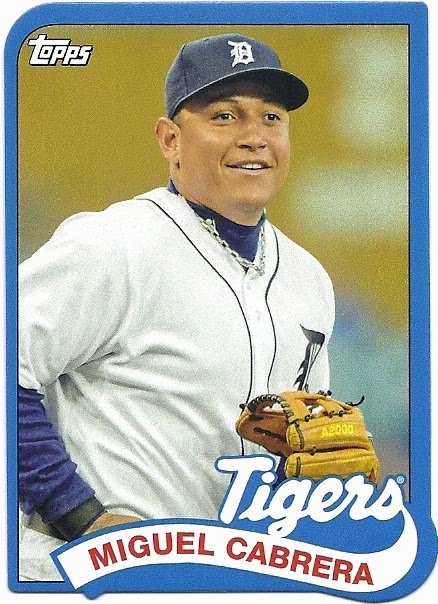 That blue is the border.  It's die-cut with rounded corners and that swoosh on the bottom right coming off the card a bit.  Not sure how I feel about these yet.  I guess I like them. 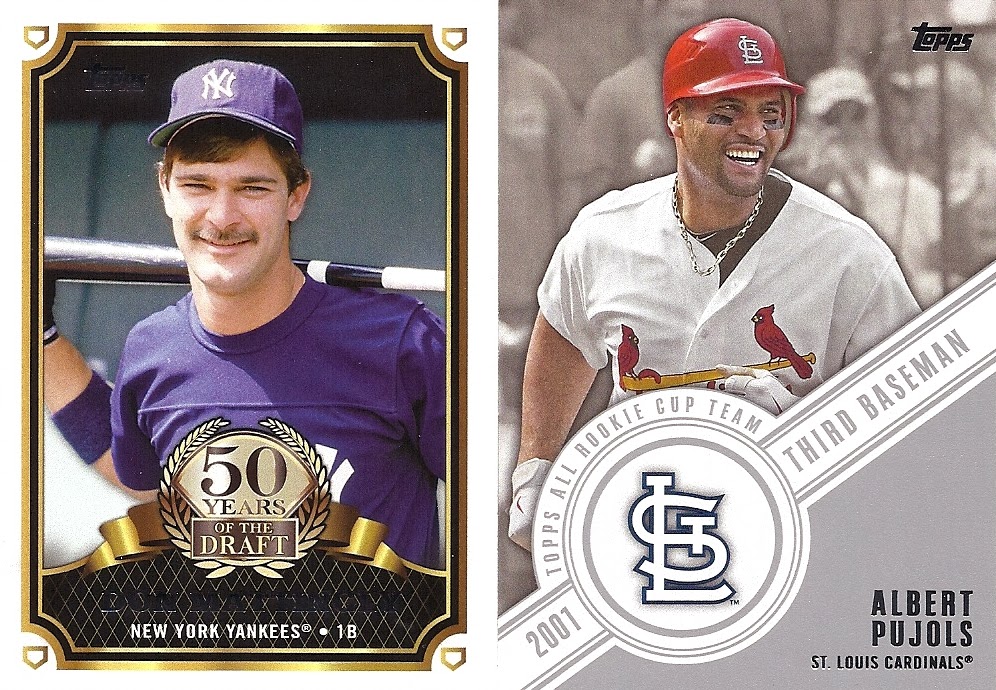 Only pulled one each of these inserts, but I love the Mattingly.  I assume there's a Griffey of that Rookie Cup Team? 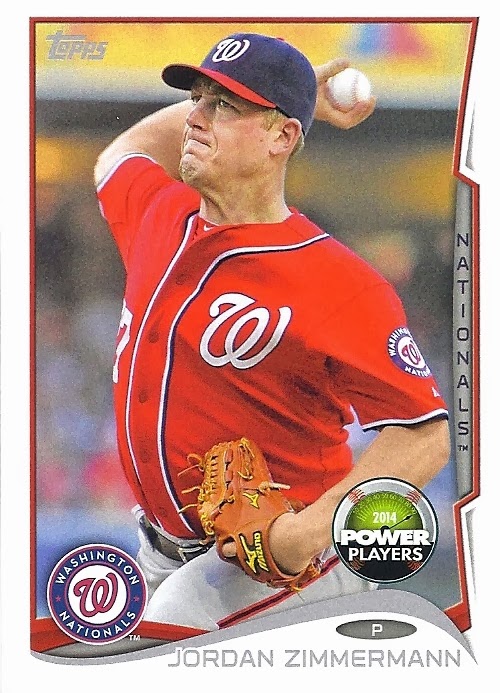 This has a game code on the back I'll probably never use.  It must be pretty rare because I only pulled one out of all those cards.  Apparently there are 110 of these in each series, and they want me to get them all.  I don't see that happening...

Hope you enjoyed the fruits of my scanning.  I'm off to....what do people without jobs do all day?  Nap?  Blog?  I'll probably do a little bit of both.  Stay warm!

Posted by The Junior Junkie at 2:02 PM 6 comments: 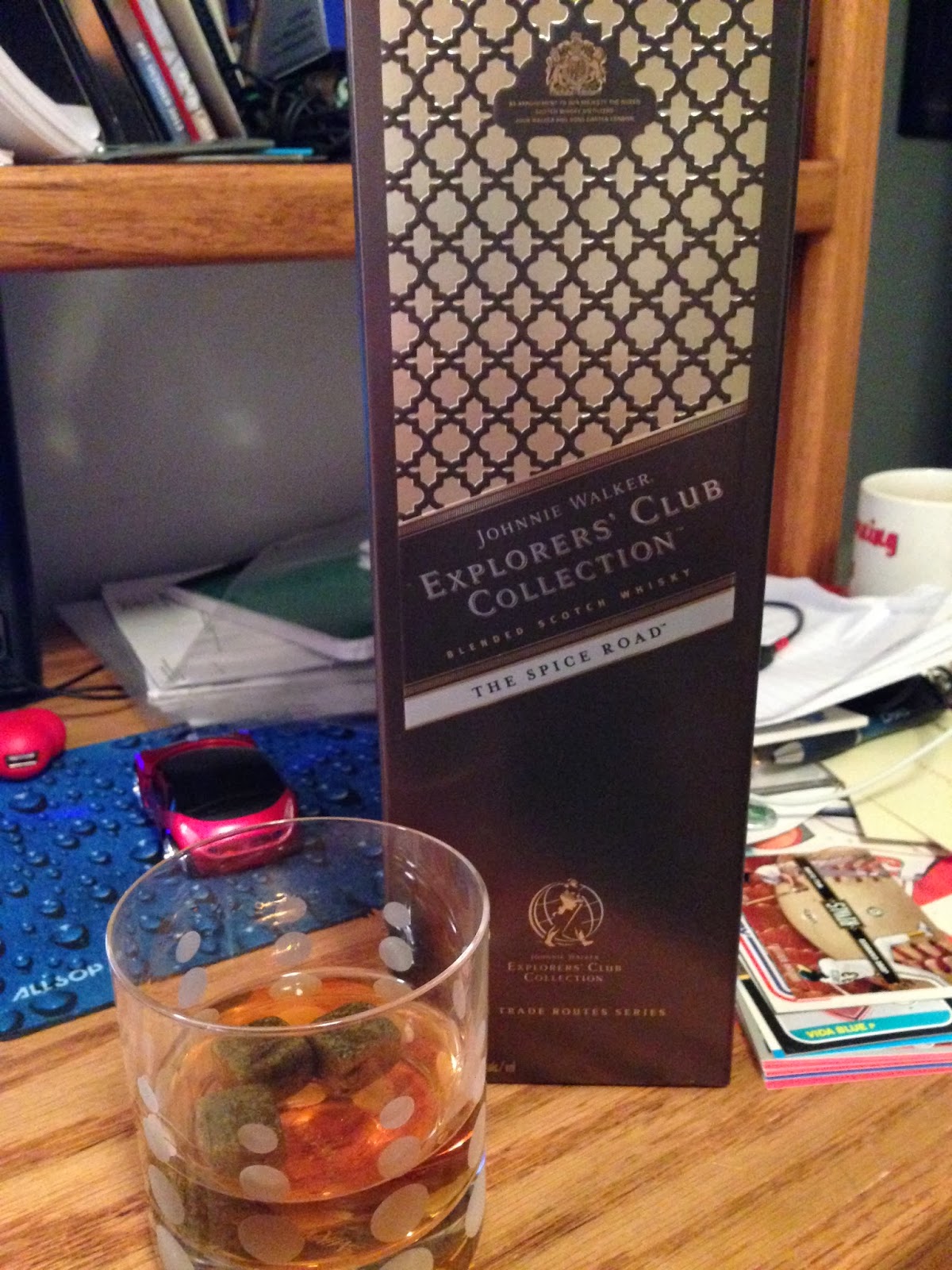 Here's to a warm night indoors with a nice scotch and a favorable Griffey count.  What more can a dorky man ask for?
Posted by The Junior Junkie at 11:46 PM 5 comments: 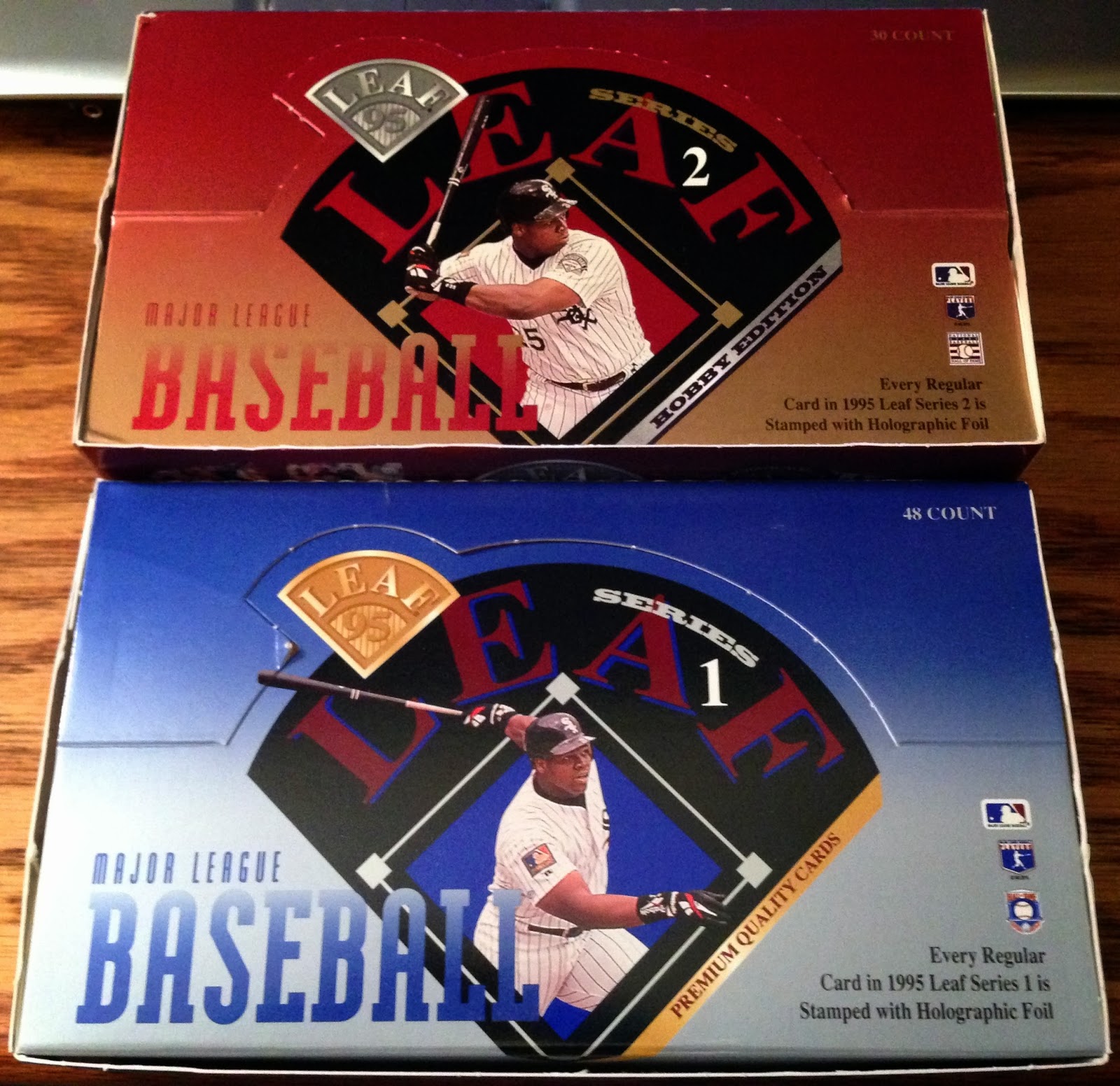 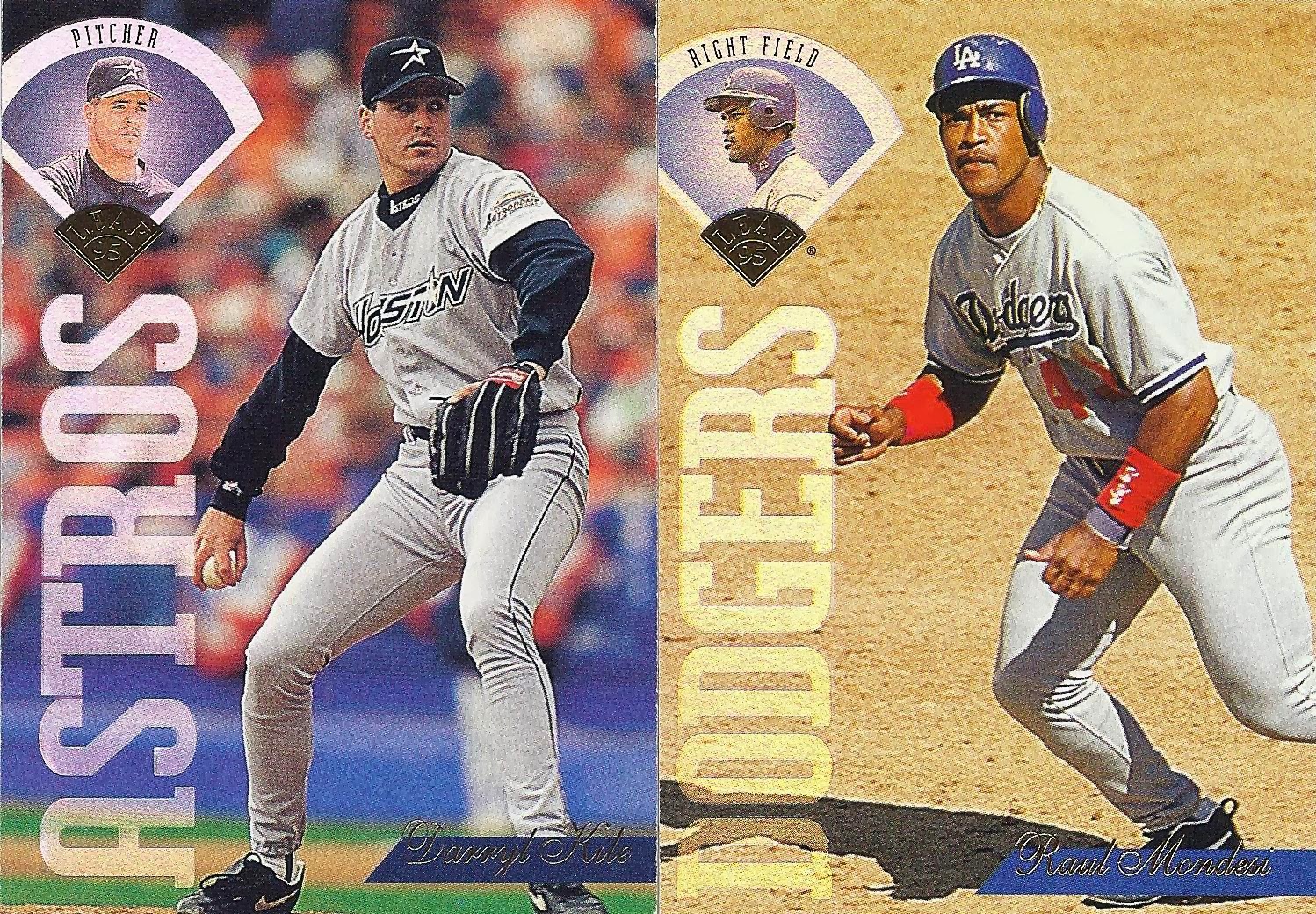 Lucky for me he has a list of '74 Topps needs on his blog which is something I could actually help him with.  I have a couple of those on their way to you now, sir, along with a couple of other cards you may like.  Thanks so much for the help!
Posted by The Junior Junkie at 12:19 PM 1 comment: