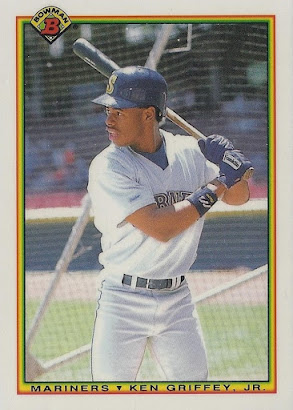 Believe it or not in the two years that fell between their infamous tallboy rebirth set of 1989 and their awesome breakthrough set of 1992, Bowman did indeed make baseball cards. I’m sure everyone reading this already knows that, but it’s important to be reminded every now and again as these cards just don’t get talked about very often on the cardsphere. In their neutered plainness, they’re very easy to forget.

By modern Bowman’s sophomore year in 1990 the brand had finally learned the lesson that size doesn’t matter – it’s how you use it. They scaled their card size back to the standard 2.5 x 3.5 which led to a lot less Bowman cardboard being flung in frustration into the wastebasket by yours truly. They did, however, stick with the chart style of stat box which remains a bit hard on the eyes (except on the Tiffany version) but switched the color on the back to a nice aqua blue that I really dig.

Rasta-riffic, right? A nice picture of an incredibly young Junior taking cuts in the cage. I have to believe this is a genuine practice and not a pose-up. Look at that focus. 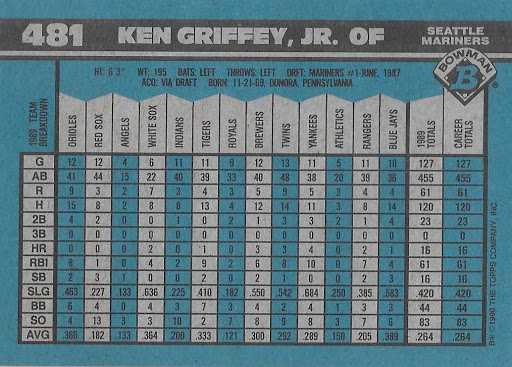 Here’s the blue back complete with Bowman’s infamous stat grid. I still have trouble reading it, but I suppose it’s kind of useful after all. That is, until Interleague play, at which point the numbers here would have to be made even smaller and, as a result, utterly unreadable.

Would you believe that a really desirable and somewhat expensive Griffey card came from this set?


Most Tiffany sets have print runs in the 5-6K range. At only 3000 sets produced, this is the rarest of the Tiffany Griffeys (late-90’s parallels called “Tiffany” not included). This one was ten bucks some time ago, but they can easily go into the hundreds now. Of course Frank Thomas also had a rookie card in this set that goes for a pretty penny, but let’s be honest - nobody really likes him. 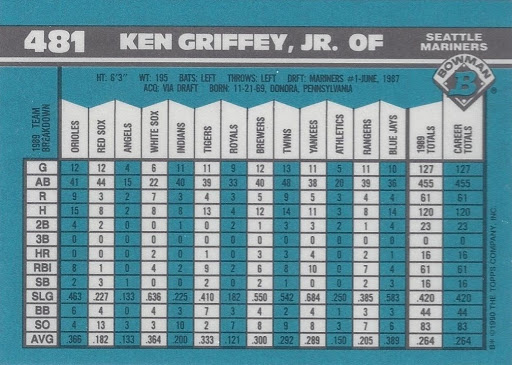 Just as with the '89 set, the stat grid is much easier to read on the white paper Tiffany.
Now this wouldn’t be a Topps product from 1990 without a few errors:


Here we have a wrong back error of Junior’s base card. There is also a blank front, but showing that would be very boring. This truly was the year of the error across all brands.

By the way, despite my snarky remark about the Big Hurt from a few sentences ago, everybody loves Frank Thomas and his 1990 Bowman rookie card is beautiful. Take a look: 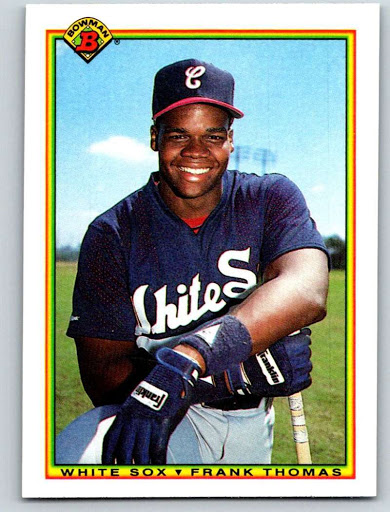 Man, there’s just no denying it: Frank is the (second) coolest!
Posted by The Junior Junkie at 8:30 AM 6 comments: