I haven't done a real #walletcard post since November of 2015 (on Blogger, I mean. I've eeked out a couple on Twitter), so you know I have a good reason to spring this one on you out of the blue: 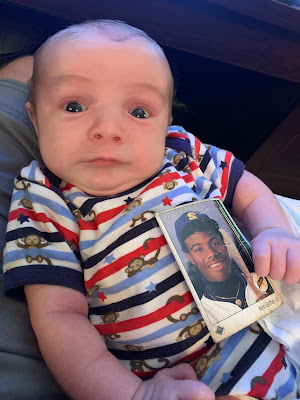 This is Archie, our latest 9lb ball of screaming meat. He eats every 60-90 minutes and is a remarkably light sleeper, all while our four-year-old (who ought to be in summer camp but is instead cooped up at home) runs around the house singing the Paw Patrol theme and licking Haribo Twin Snakes so they'll stick to the wall. So yeah, you know we are in a really good place mentally right now. Archie just made a month old, so I'm giving him a few more weeks to get his act together. 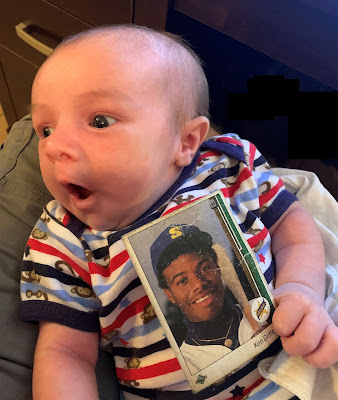 His name is actually Archer. I wanted to call him Archie, but didn't want to go the "Archibald" route because come on. His namesake is basically this guy: 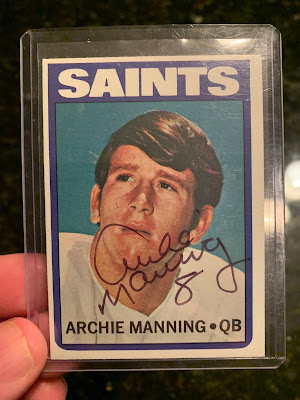 Archie (the big one) comes into the office a few times a year, so I've kept his rookie card in my desk, waiting for a good time to ask him to sign the thing. He was friendly and accommodating. Afterwards I realized how much I like the name, and after a little wife-nudging and a lot of brainstorming about how to circumvent "Archibald," the boy's fate was sealed. 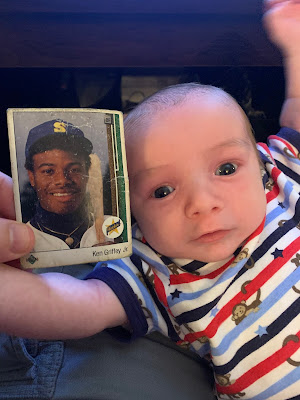 He shares a birthday with my Dad, so we already know he's probably going to be good with money and disappointed in my life choices. He's also the eventual owner of half of a hella-sick Griffey collection. What better head-start could a father give his son? 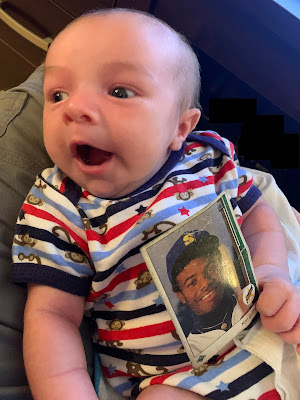 He's also a huge fan of metal music. Once when he wouldn't stop fussing I tried playing nice relaxing music like Beach House and Sigur Ros and he just wasn't having it. Then I put on Metallica's "Creeping Death" and the change was immediate. He was downright relaxed. Blissful, even. He also enjoys AC/DC, Lamb of God, and Trivium's "The Crusade." I'm not a huge metal guy so I have no explanation for this. Maybe it's the sound of crunchy man-amps.

I was churning out the posts with fierce regularity for a couple months there, but I think we all knew it couldn't last. You can expect a slowdown here at The Junior Junkie. I am pleased to report that I have several mostly-complete posts ready to go just waiting for me to return to my work computer (which I haven't seen in four months) to finish off. I am also wading through a ton of requests for specific set posts, so in the minutes between feedings, cleaning poop off of the infant carrier, and trying to catch a few precious moments of REM sleep, I will try my darndest to blog. No guarantees, though.
Posted by The Junior Junkie at 8:30 AM 9 comments: