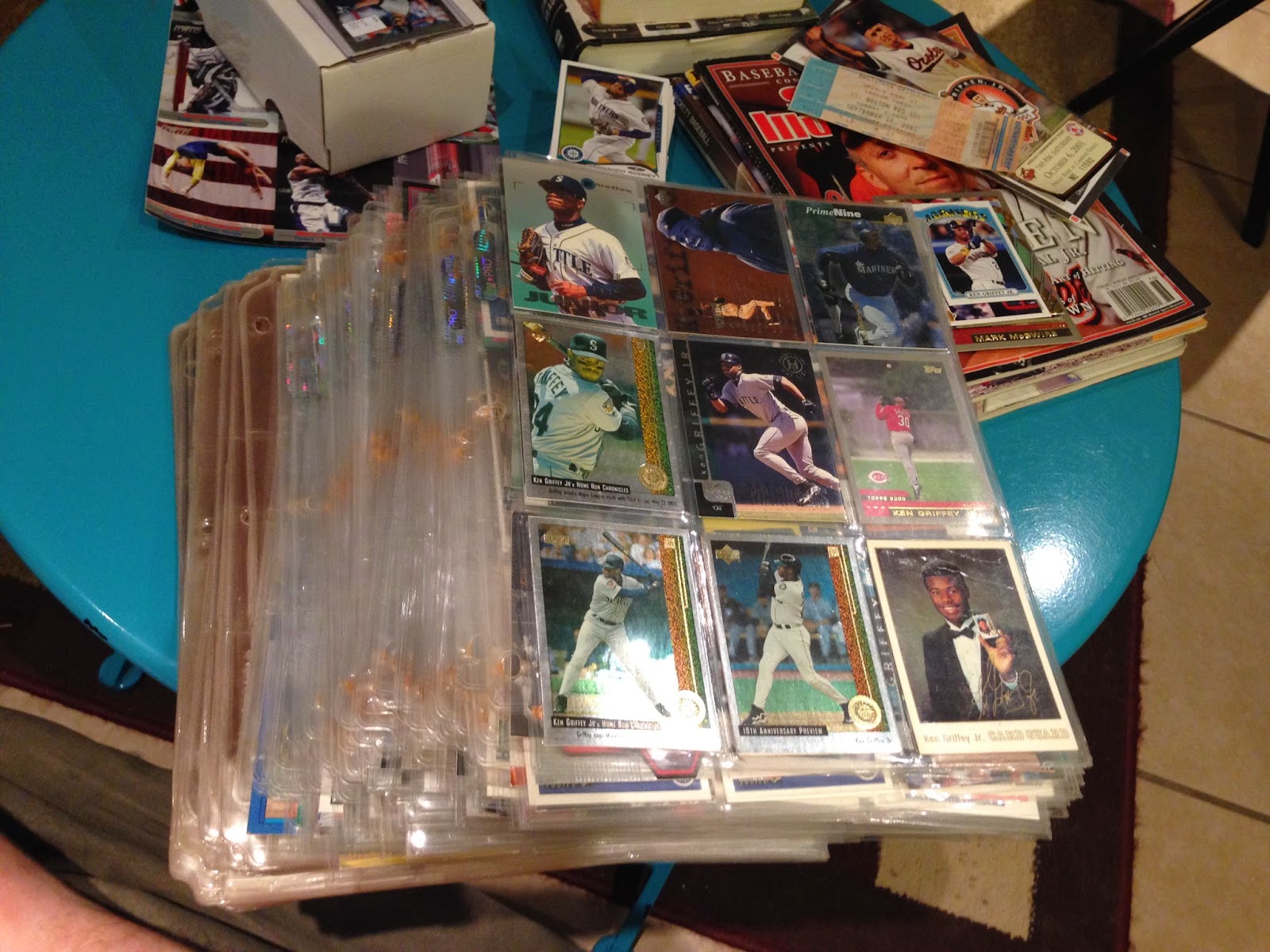 This is the stack of binder pages I got from my LCS for five bucks.  It proved to be well worth the investment, and I was able to glean a lot about the guy who originally built this collection.  I should note that I only scanned about 15-20% of the total cards from these pages, those being the ones I intend on keeping.  There were plenty more that are going into the trade boxes.  Now, let's learn about this fellow.

The first thing I noticed is that he loved the Orioles. 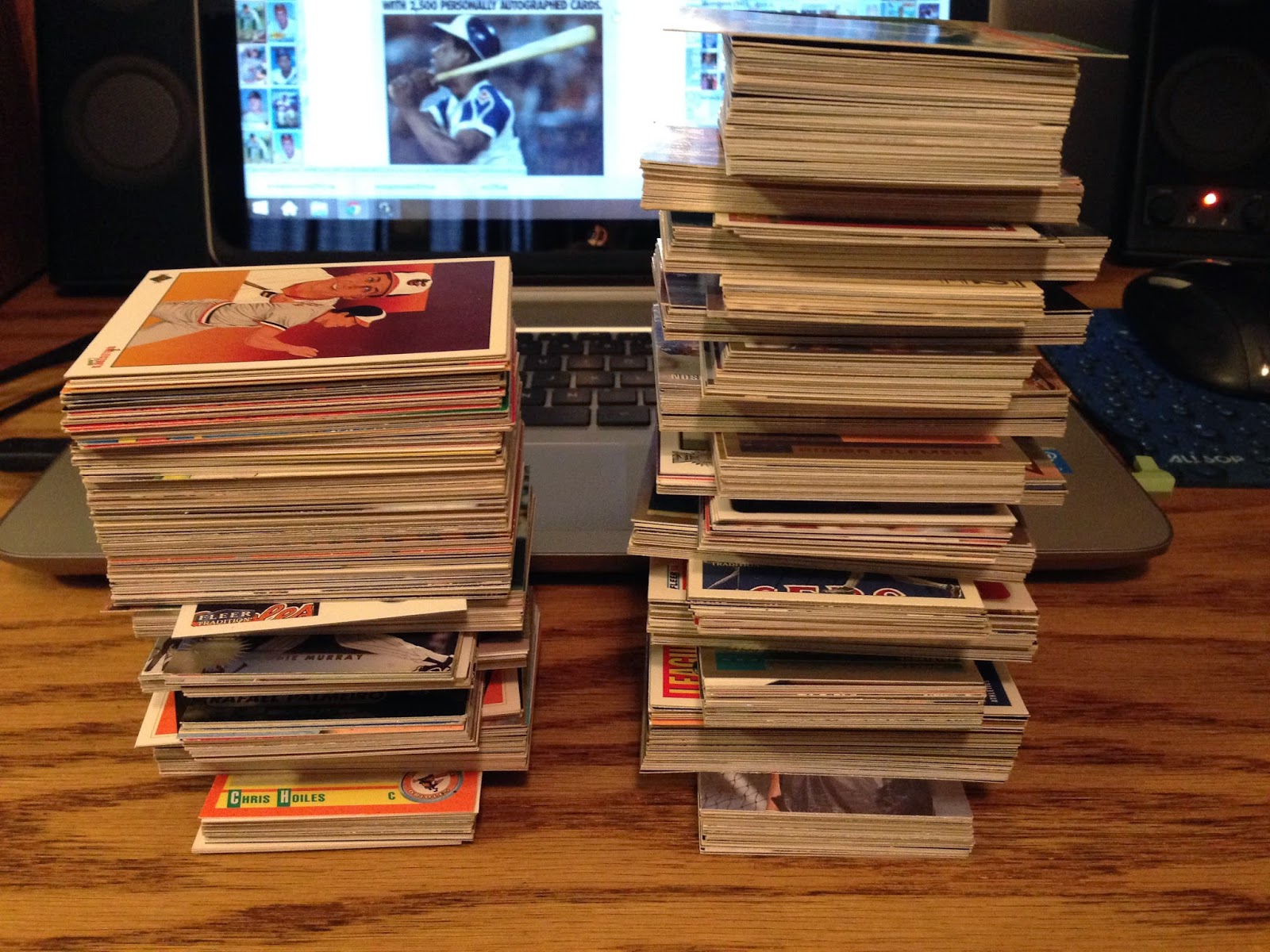 The stack on the left is all Orioles, the one on the right is everything else.  And this is me leaving Eddie Murray and Roberto Alomar in the right side stack.  Had I counted those it would be a lot closer...

The biggest chunk on the left is all one player.  You can see who it is, right?  No surprise...

Next, while not his favorite player he obviously had some respect for the Kid.  Here's the stack of Juniors those pages produced contrasted with everything else: 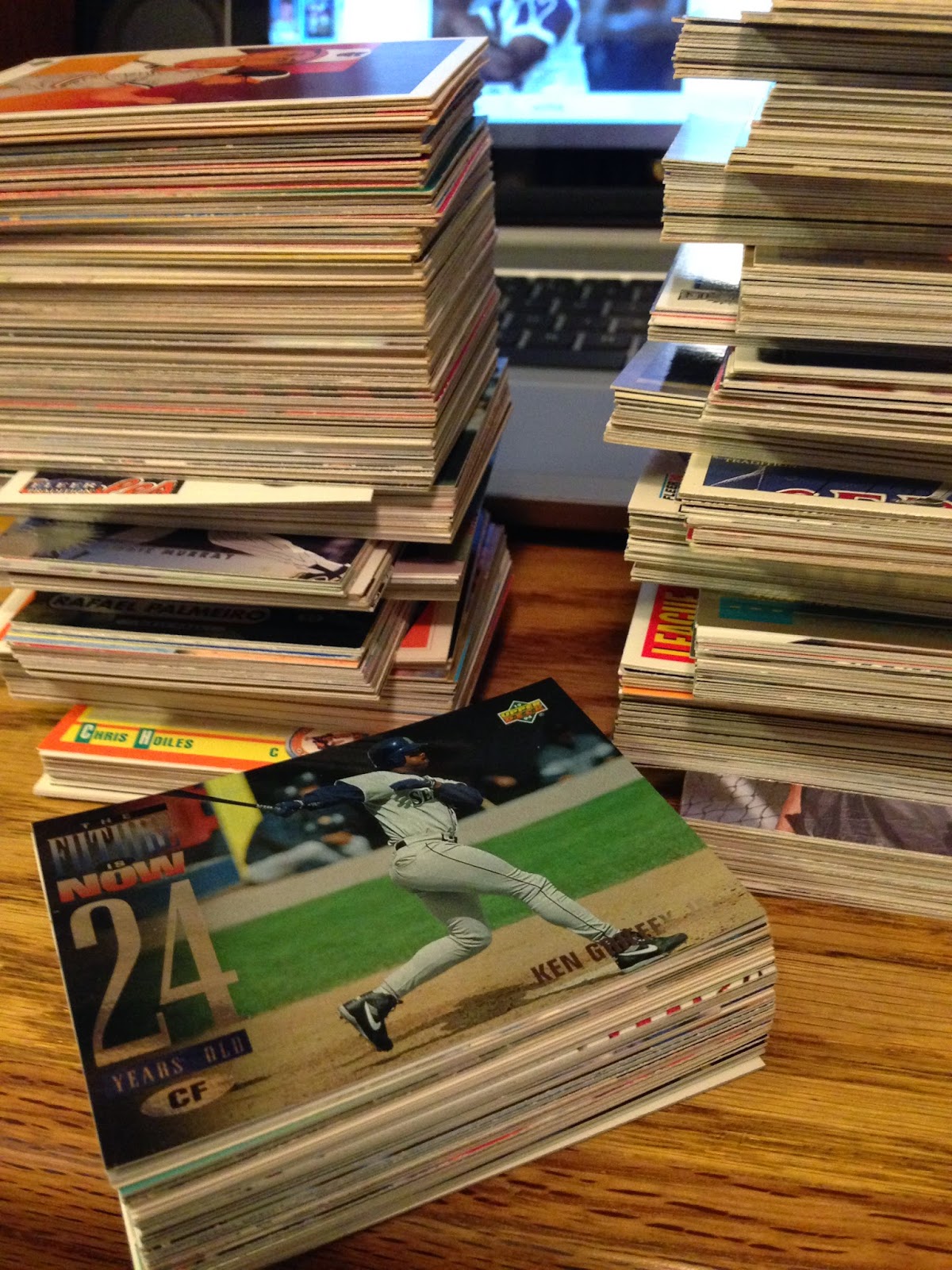 There were about 50 Juniors in there all of which I already had.  Still, here are a few worth a look: 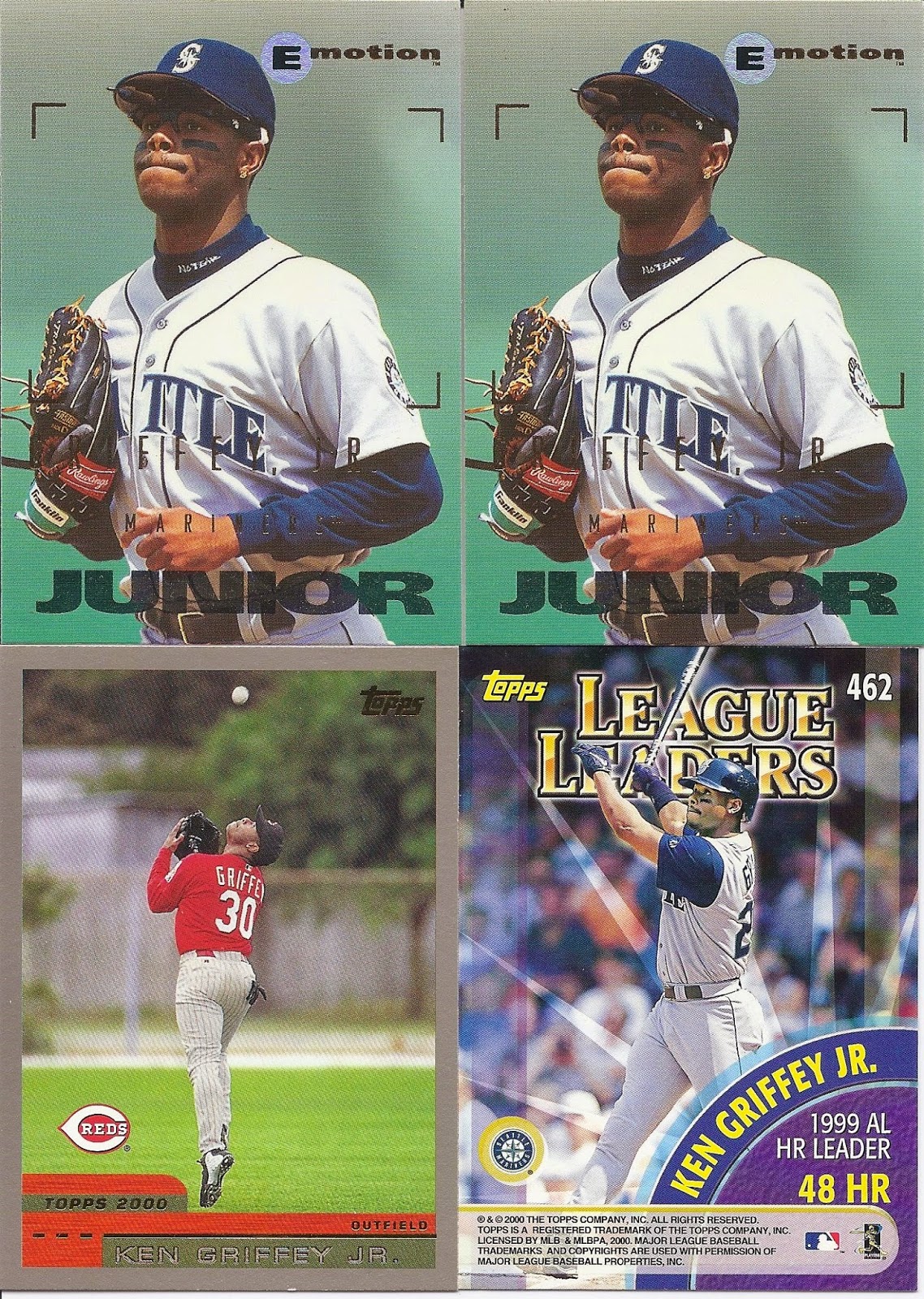 There weren't many cards from before 1993 nor after 1999, so he probably discovered women about the same time as me. 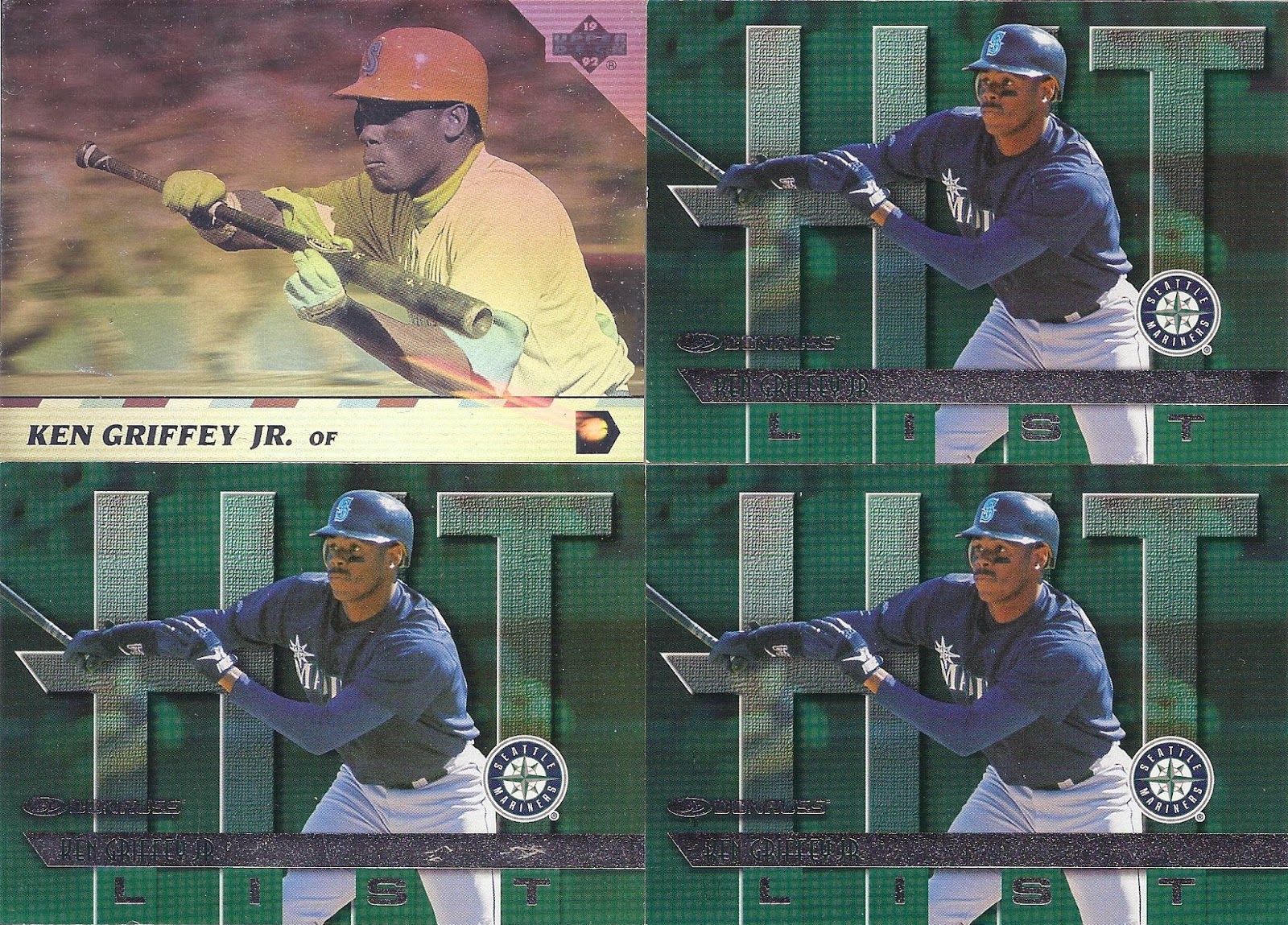 He loved Donruss and Denny's, and who can blame him? 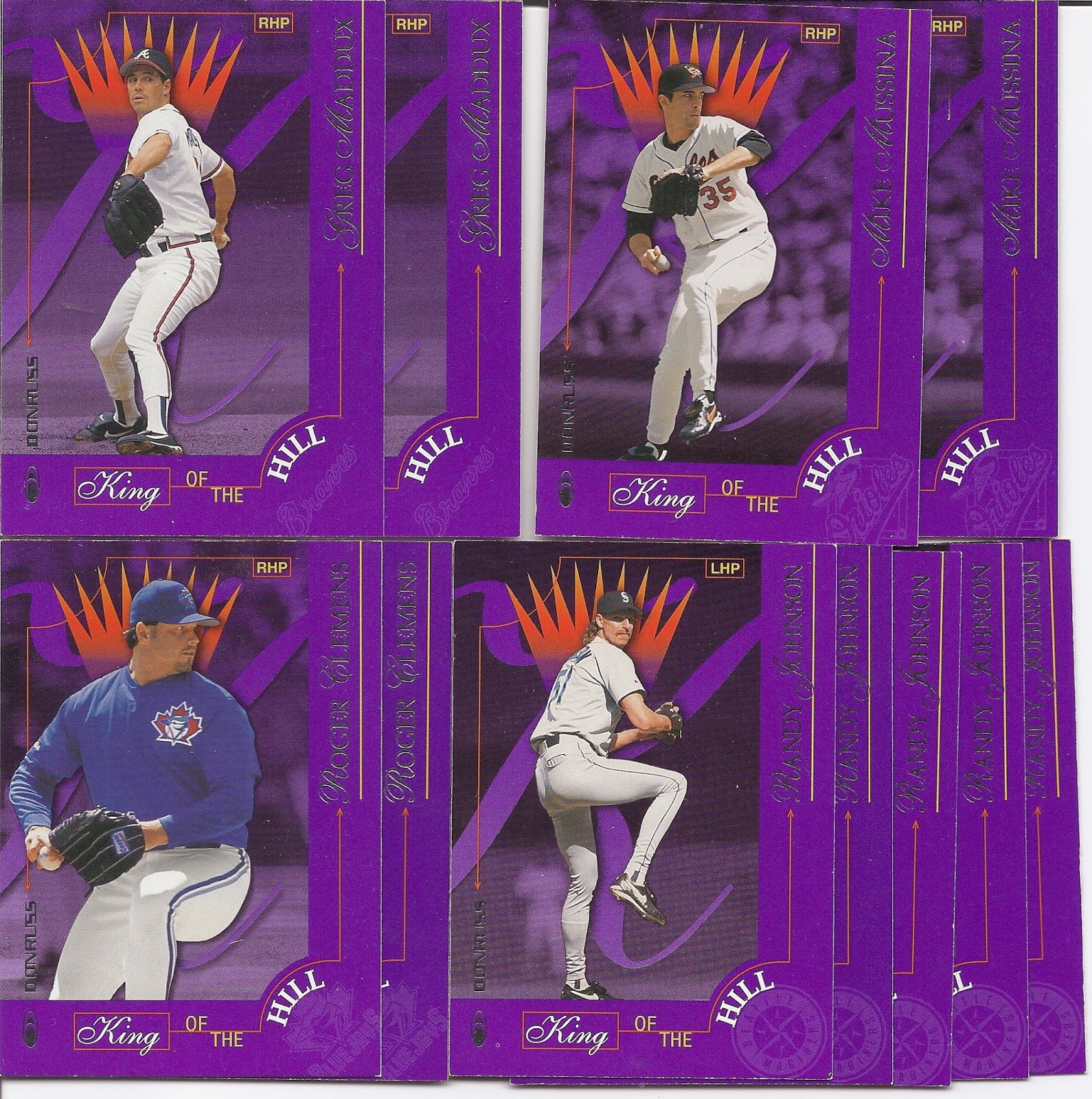 In fact I'm willing to bet he got a box of Donruss for Christmas one year. 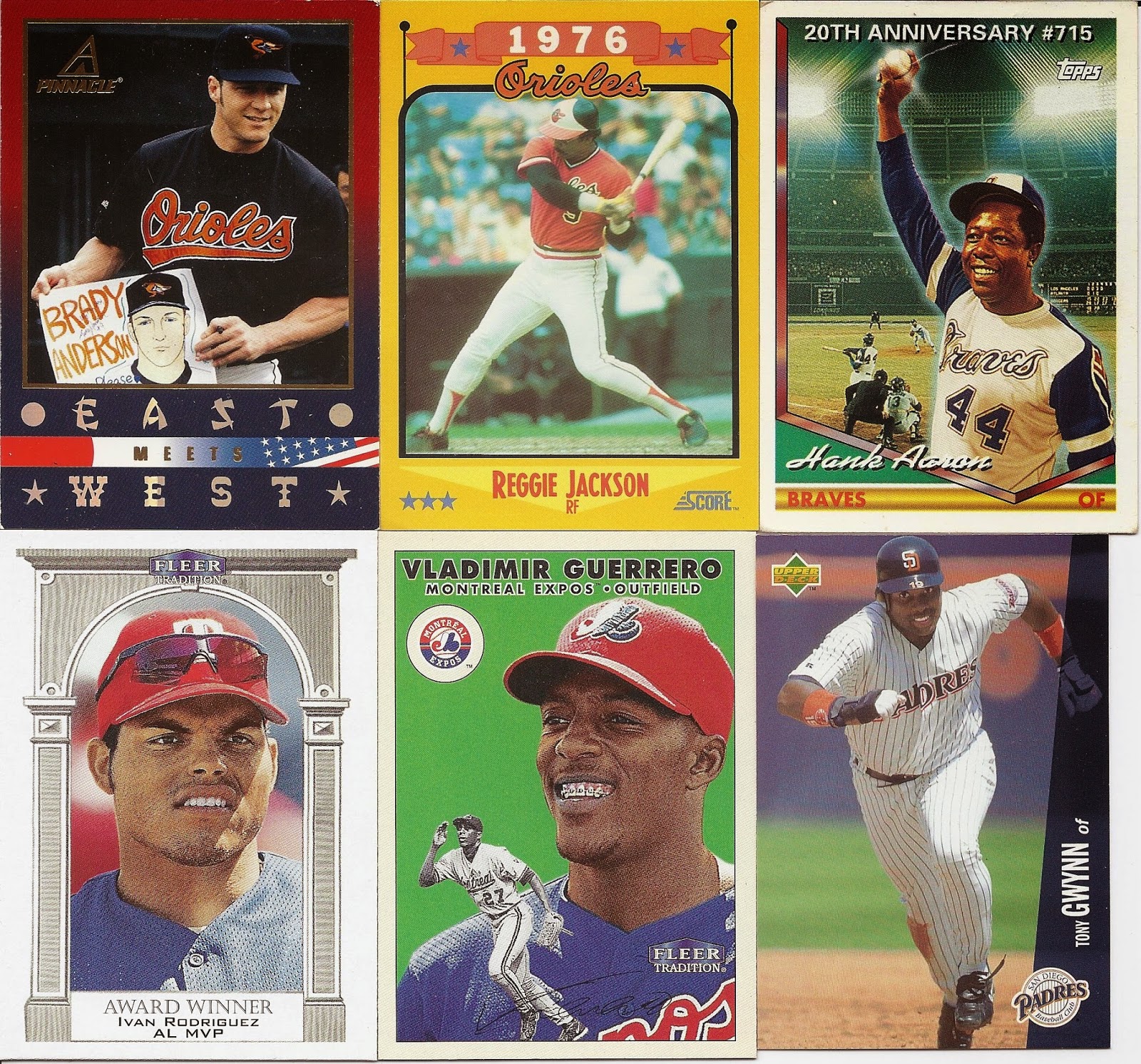 He randomly picked up packs in his later years just to keep up with the hobby.  I found a few of the same brand cards scattered in random pockets while the majority of the binders seemed meticulously organized. 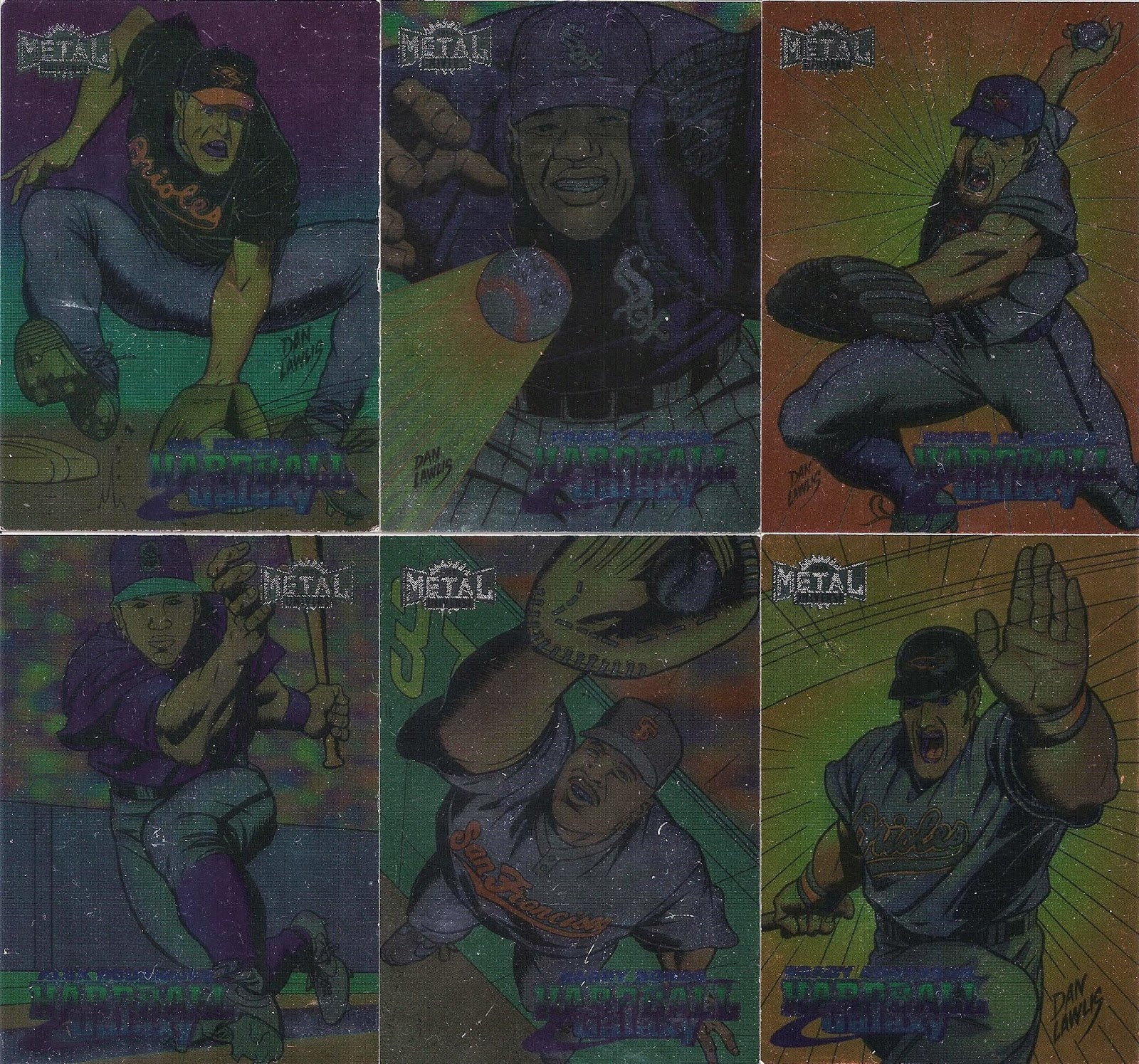 He had an eye for funky inserts, unscannable as they may be. Again, had to be a box of Donruss at some point. 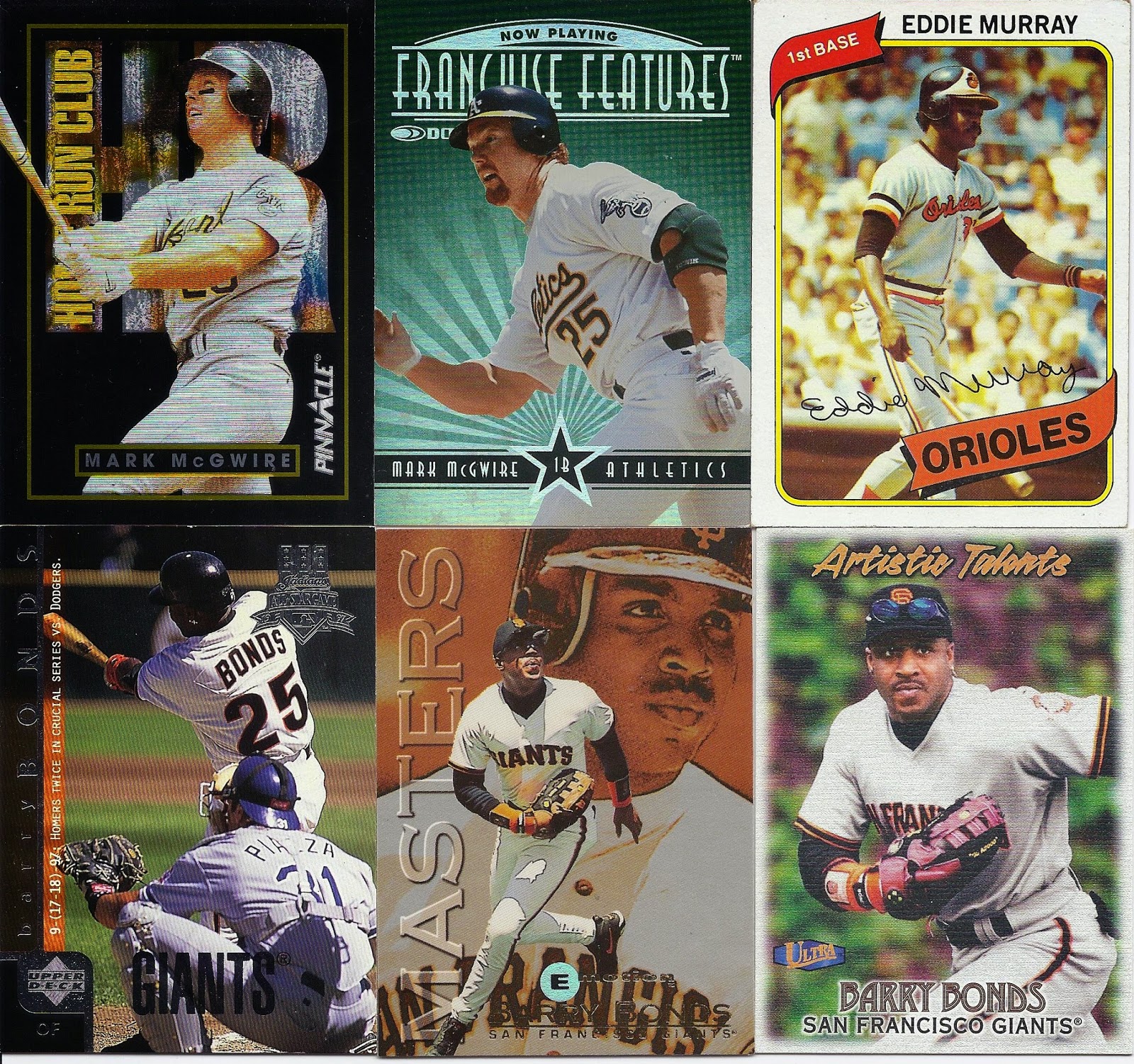 He bought a lot of Emotion, too.  I'm glad he did - there are some sweet inserts in here. 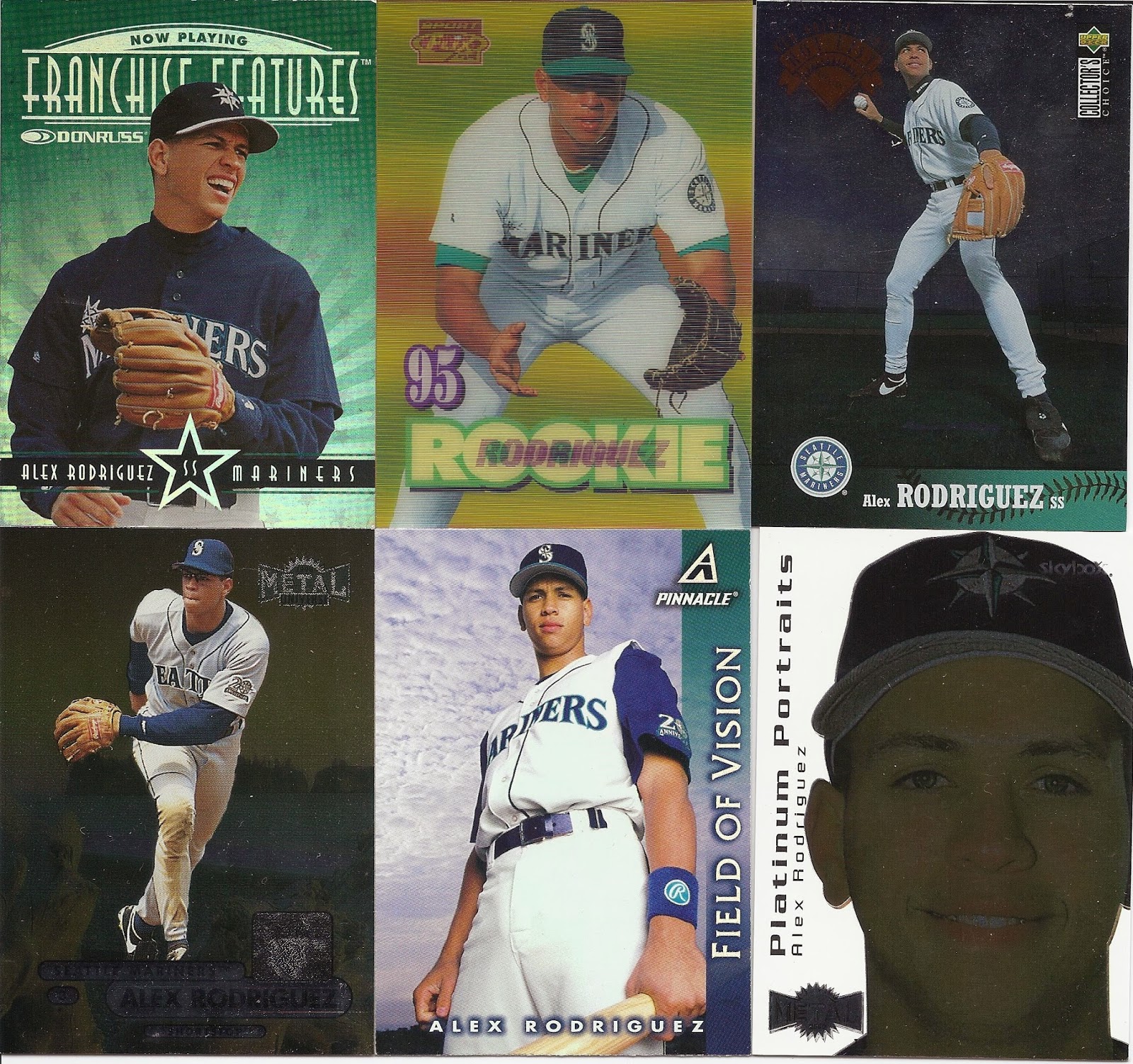 He was at least a little heartbroken when he heard about A-rod's indiscretions with PED's.  That may have had something to do with why he got rid of his collection to begin with. 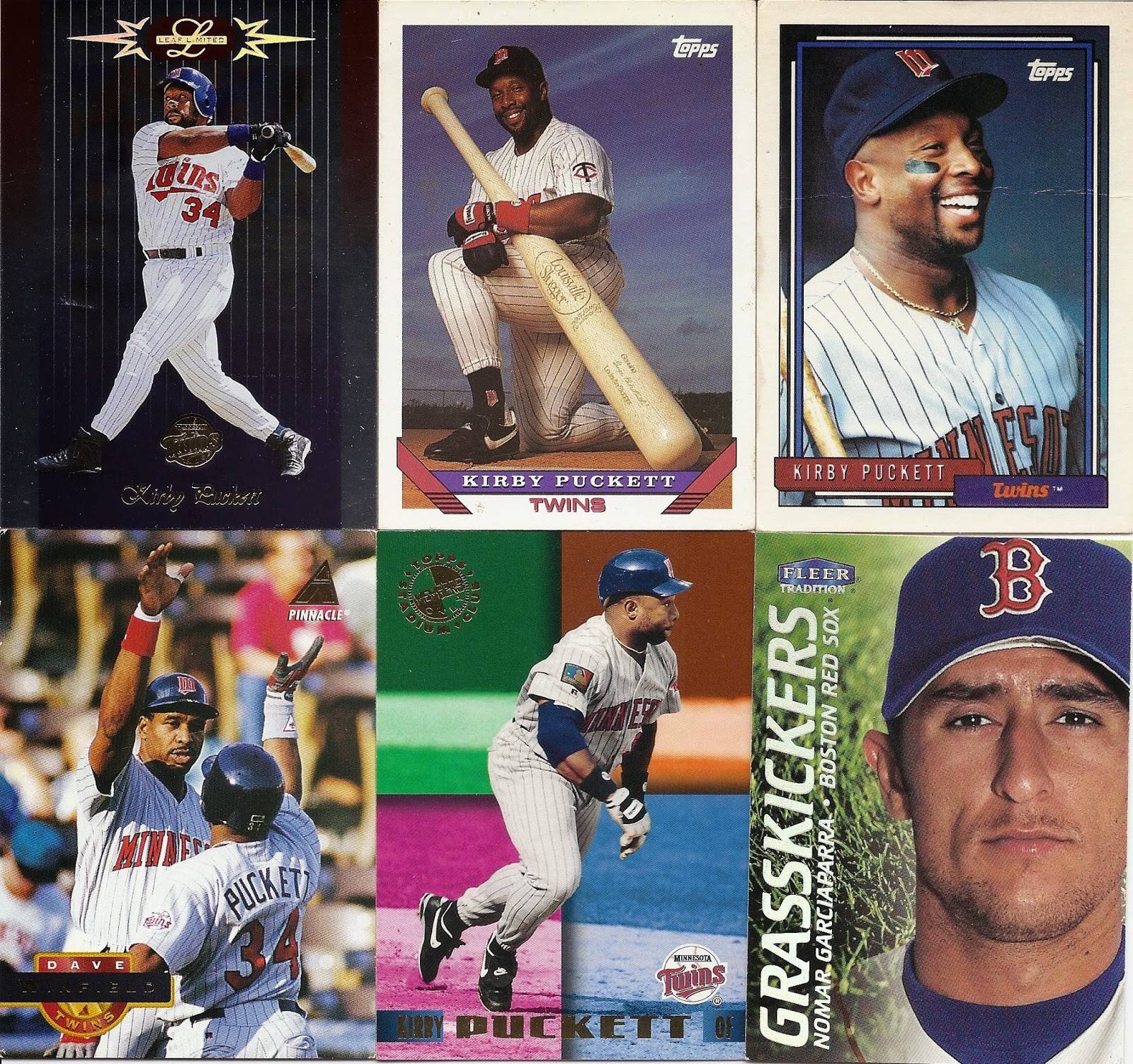 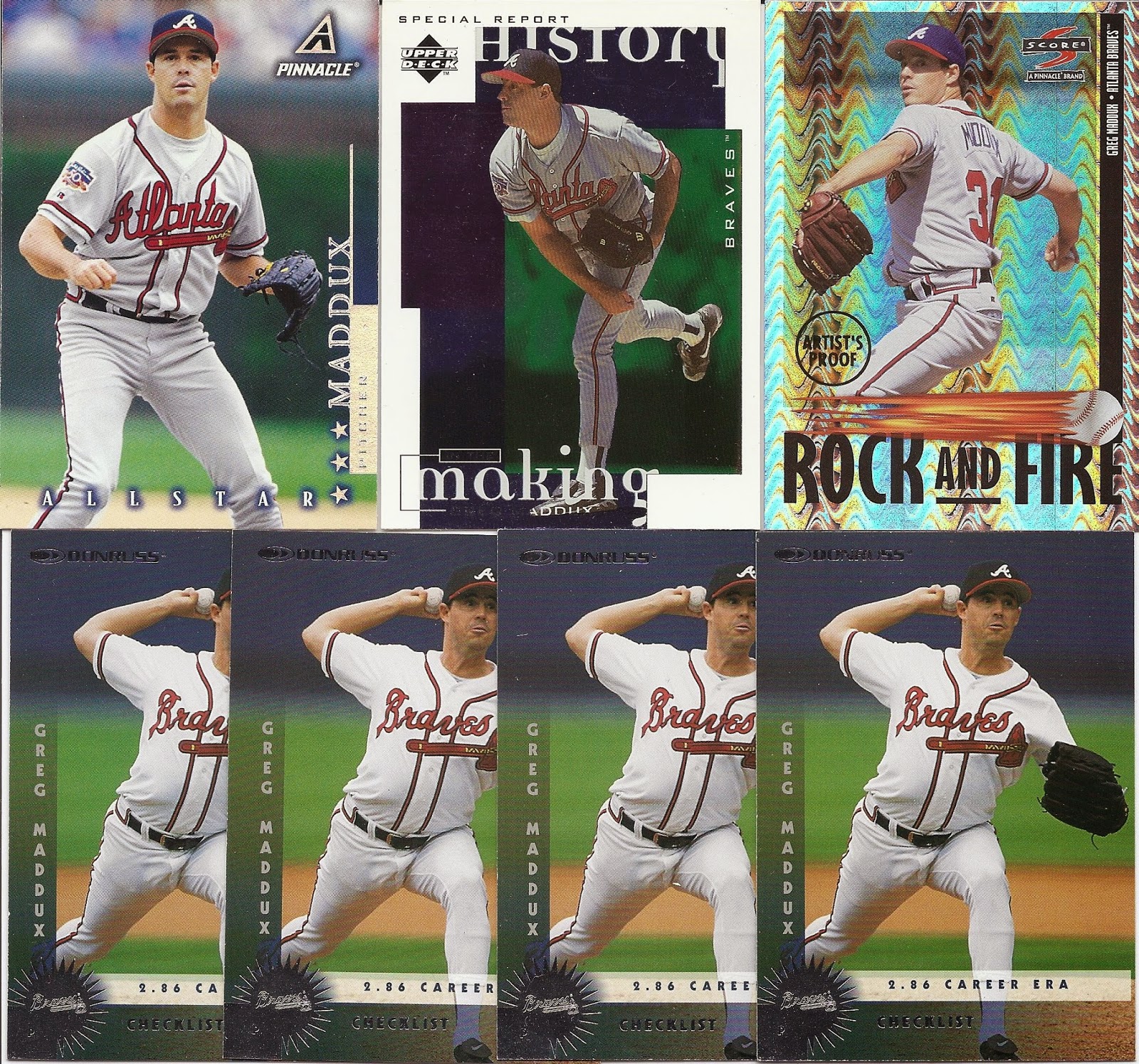 The Donruss box strikes again.  Oh, and he didn't believe in top loaders - otherwise that sweet Maddux AP would have been in one.  It's like a $12 card even by today's standards.  Back then it must have been a fortune. 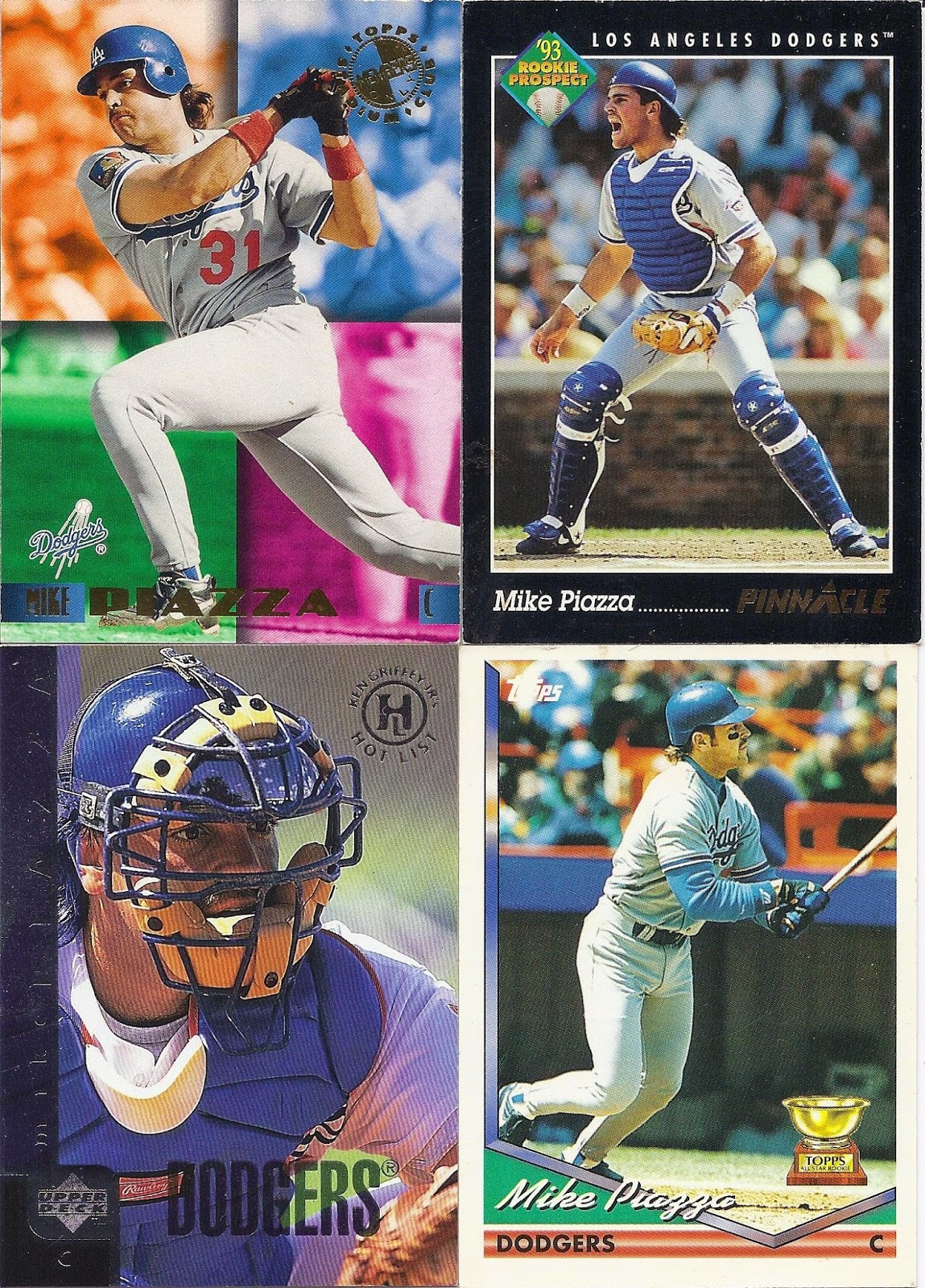 All the Beckett stars were represented here. 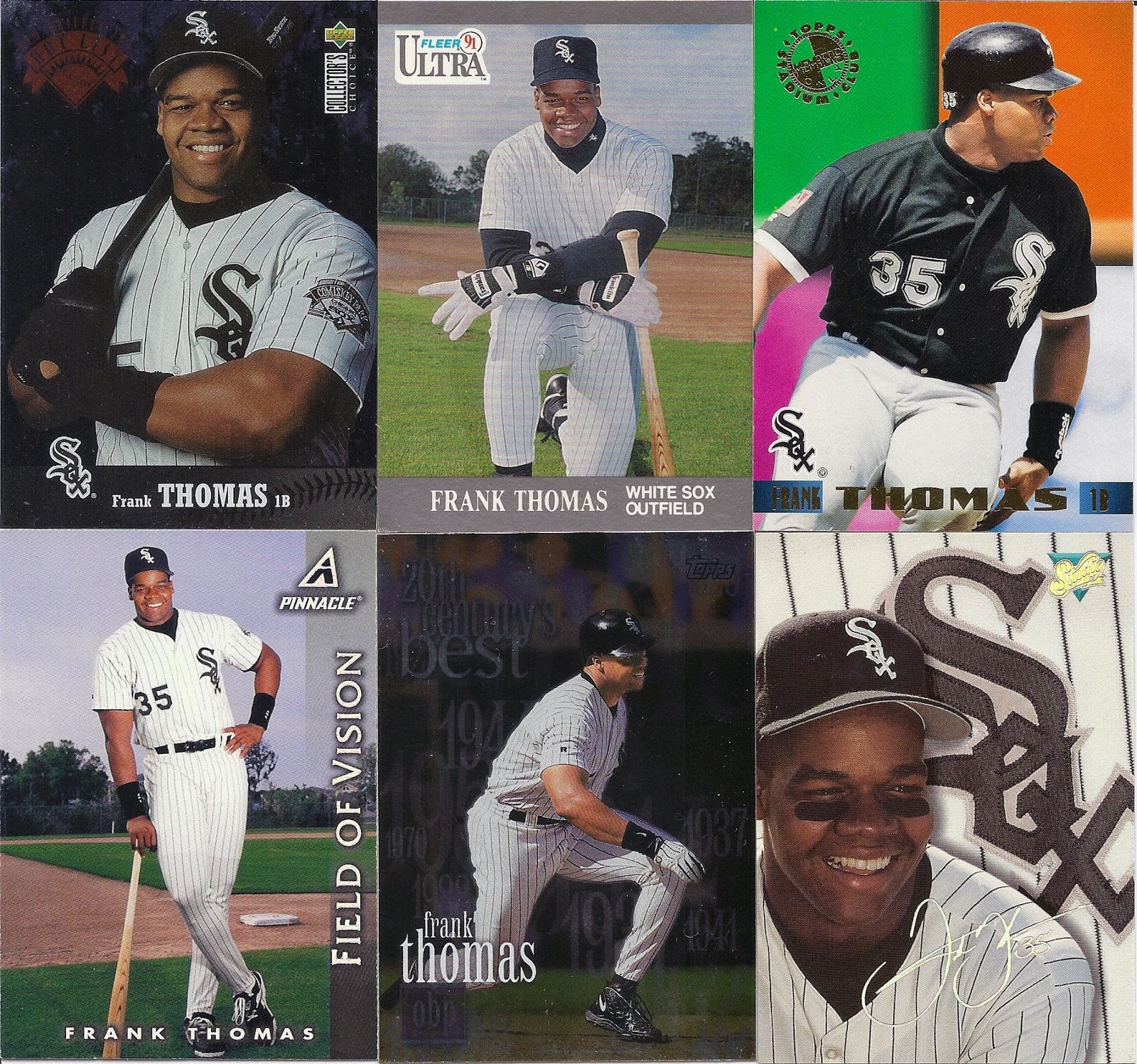 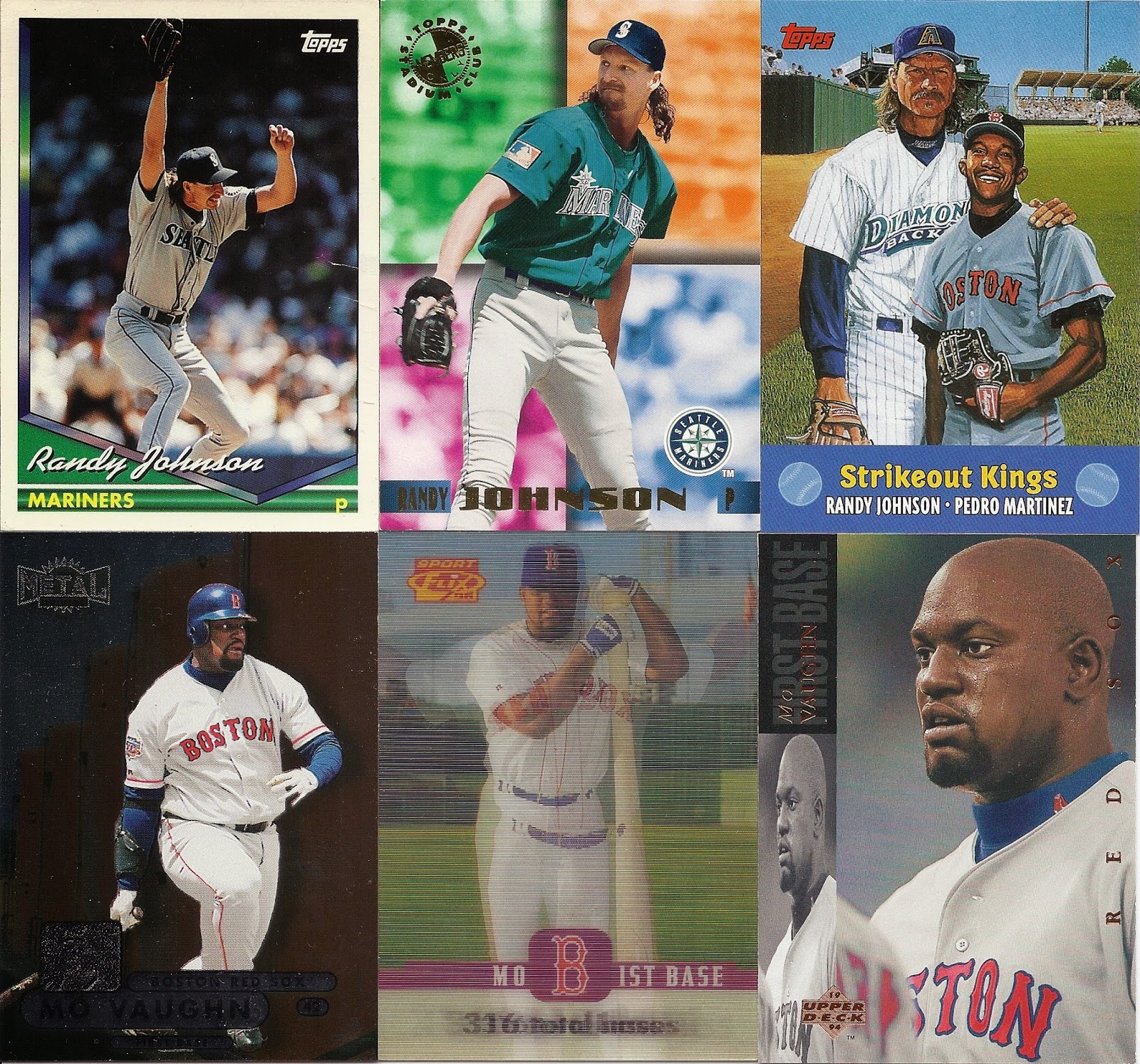 You can always tell a 90's collector by how many Mo Vaughns he has.  Dude had a healthy stack.

I love that Alomar cameo; and while I don't really save Sosas, I like that picture a lot. 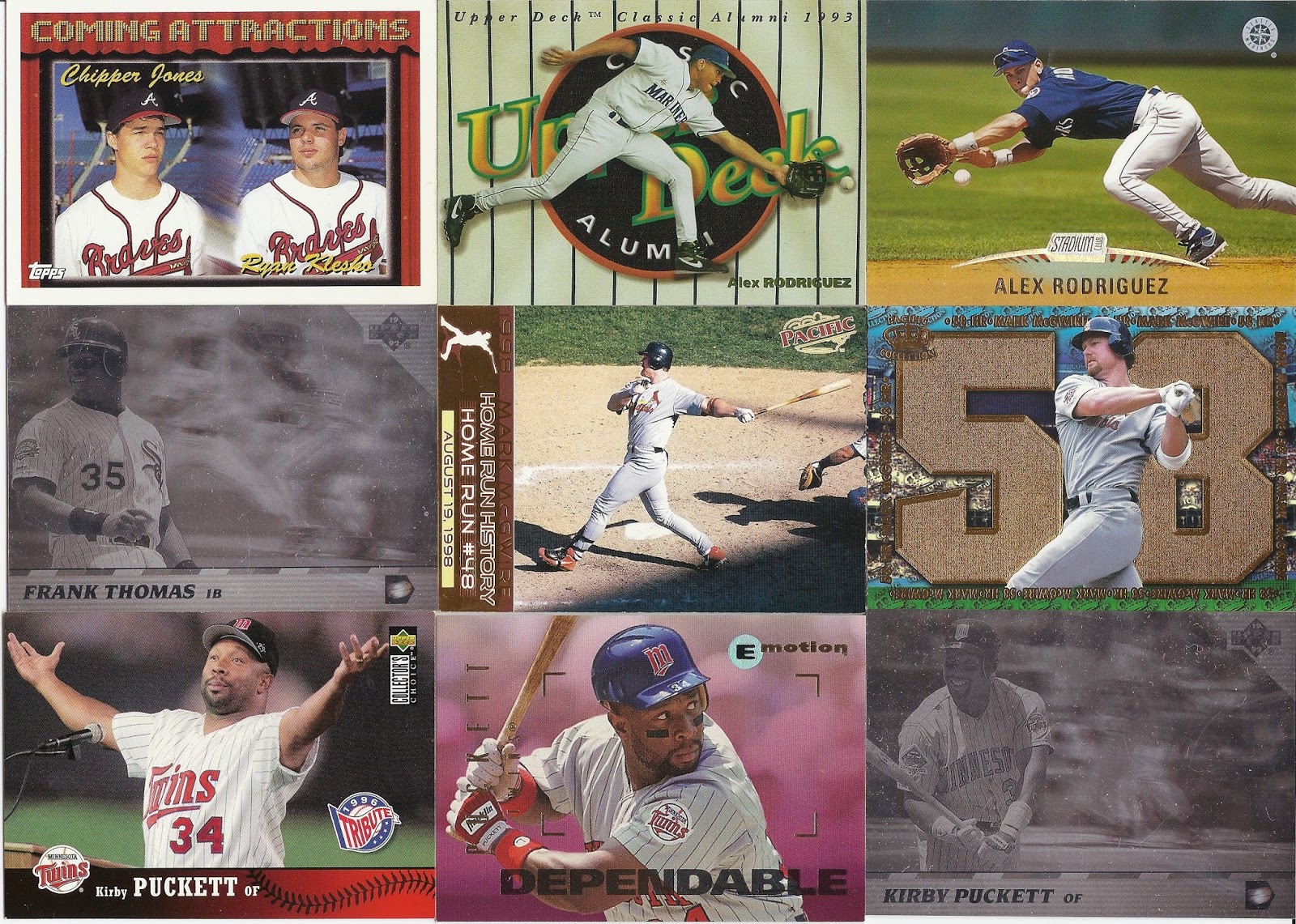 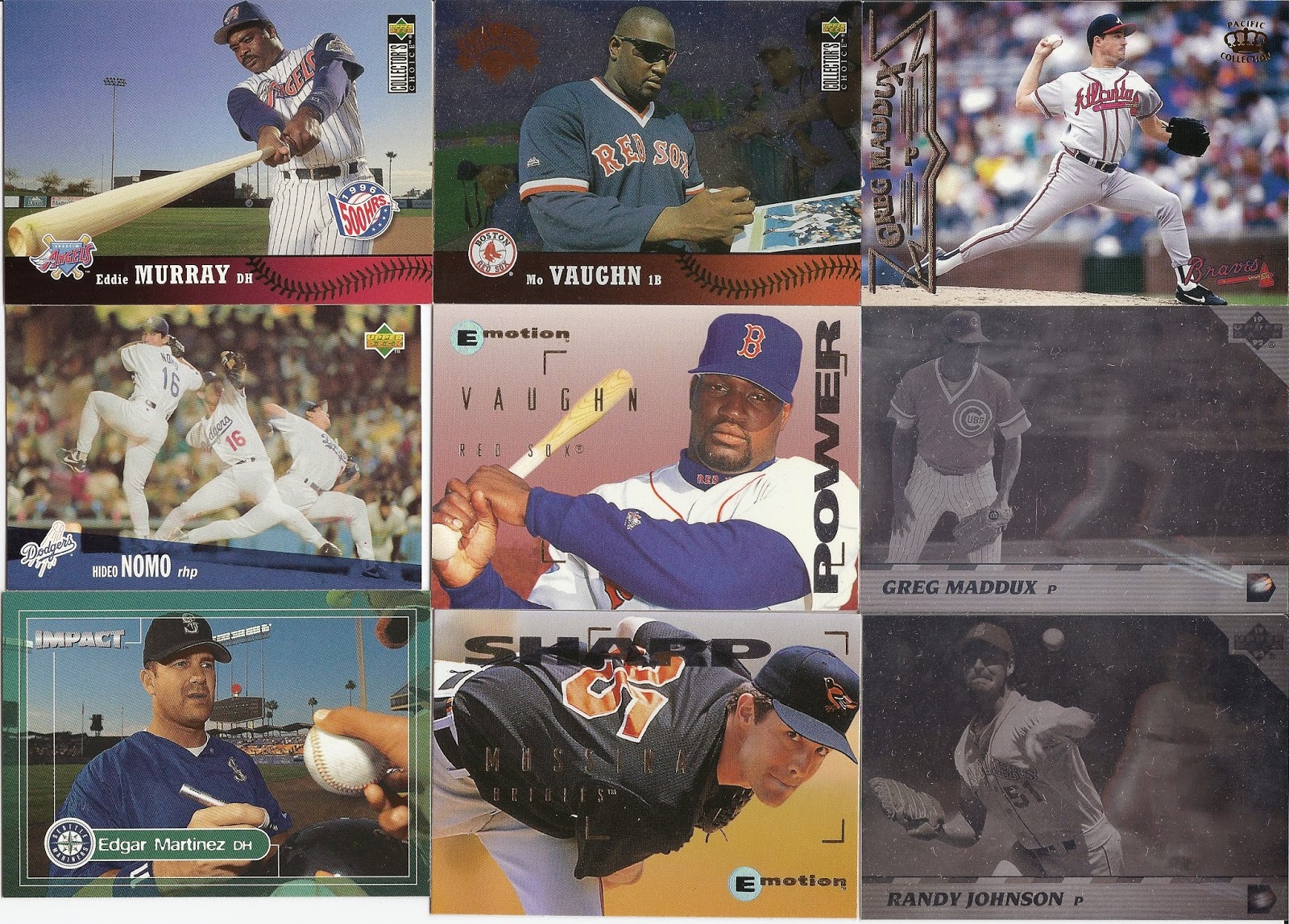 Based on when he collected, we can assume he was probably super excited to pull that Nomo.

As you probably know by now, mystery guy's favorite player was without a doubt Cal Ripken, Jr. 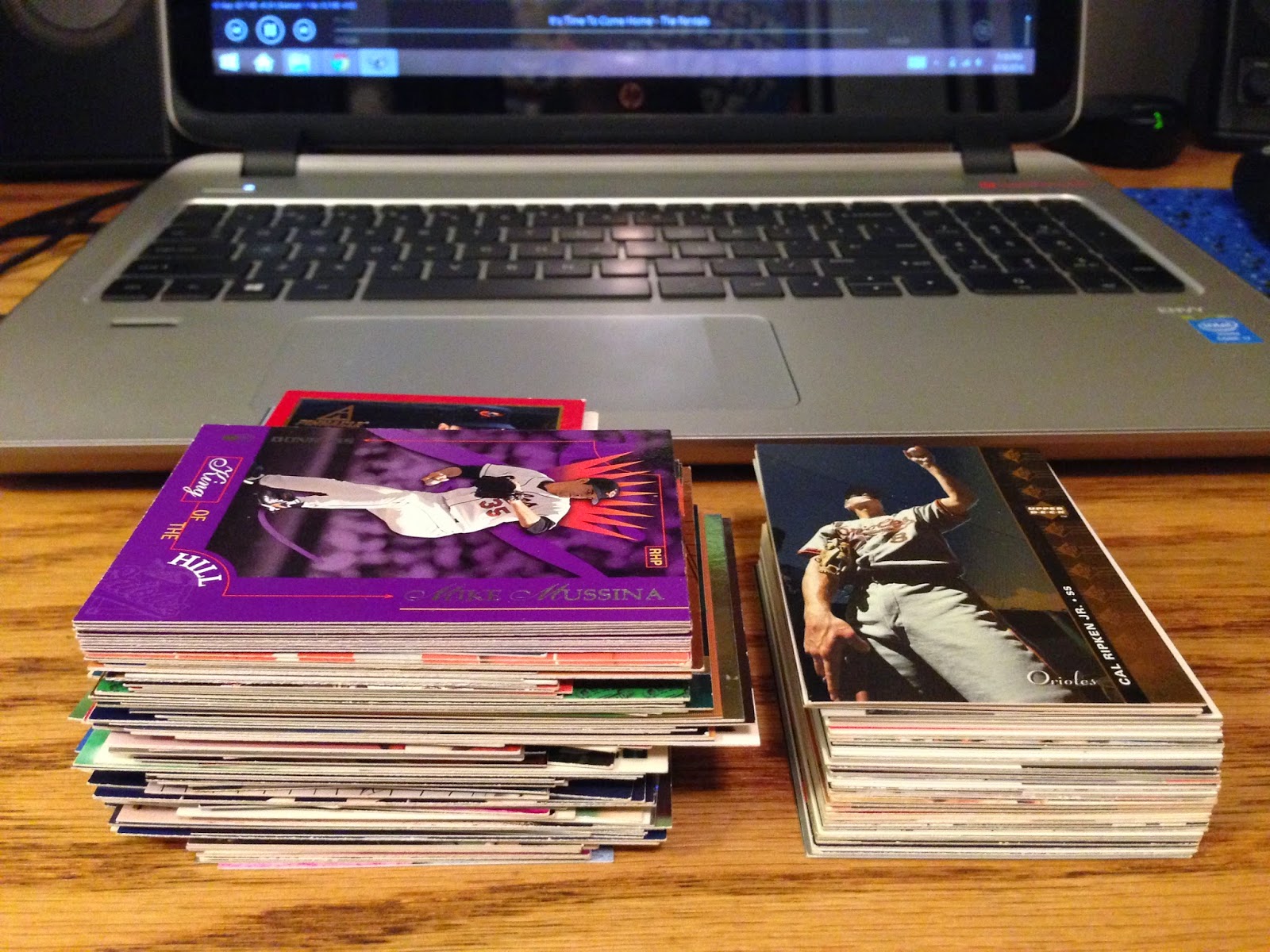 Those are the Ripken keepers on the right, and all the other keepers (minus the Griffeys) on the left.  There were a TON.  Some nice ones, too: 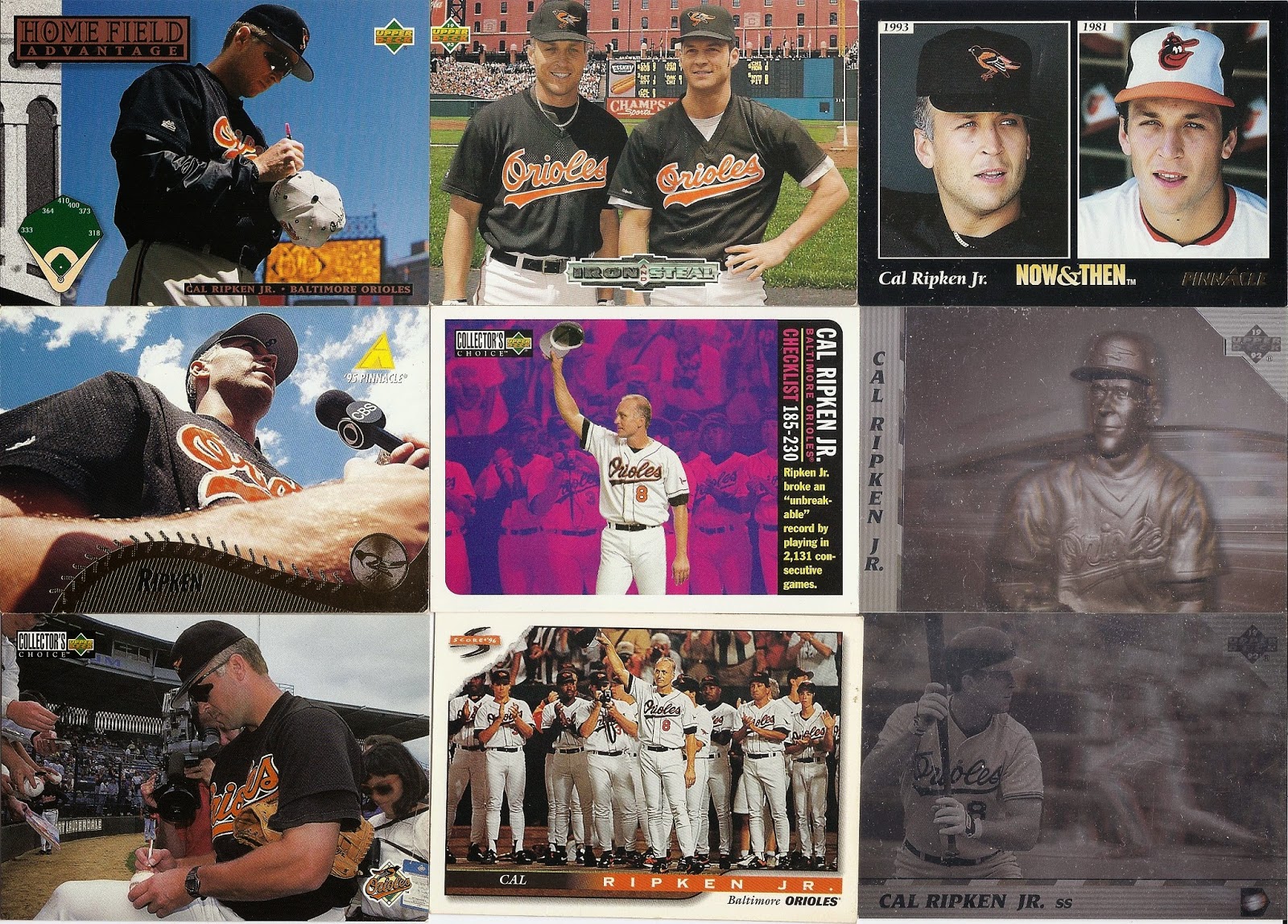 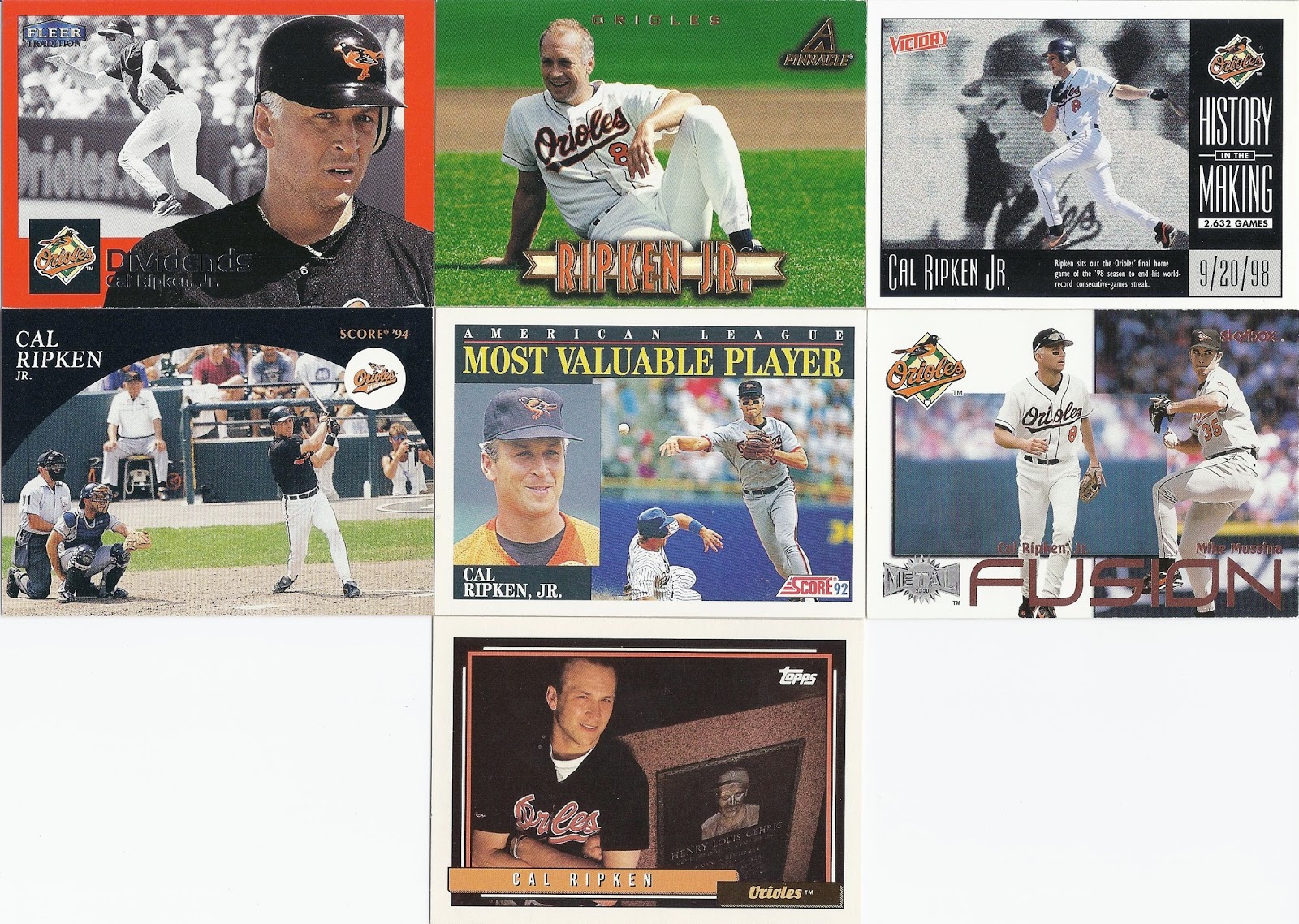 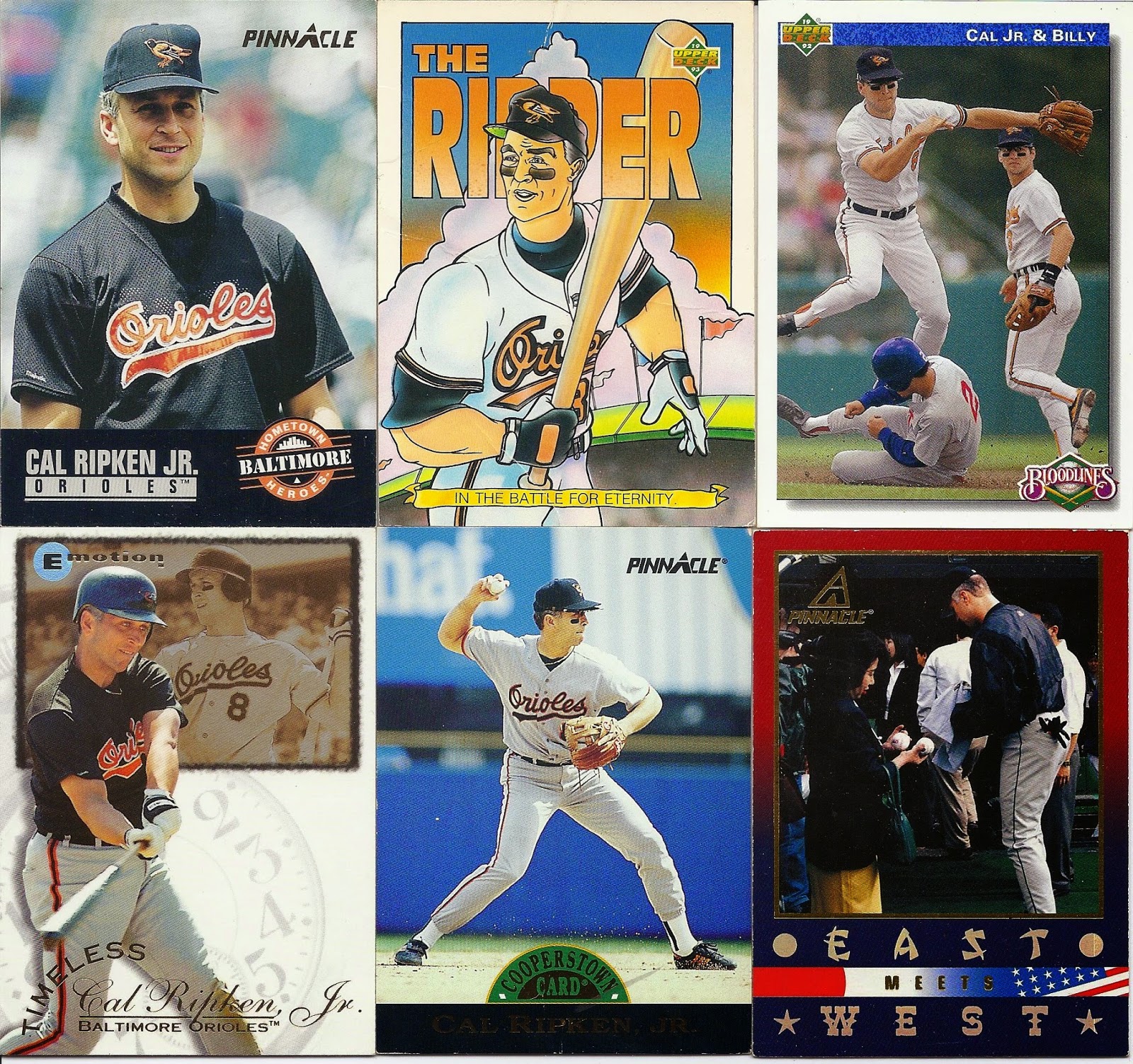 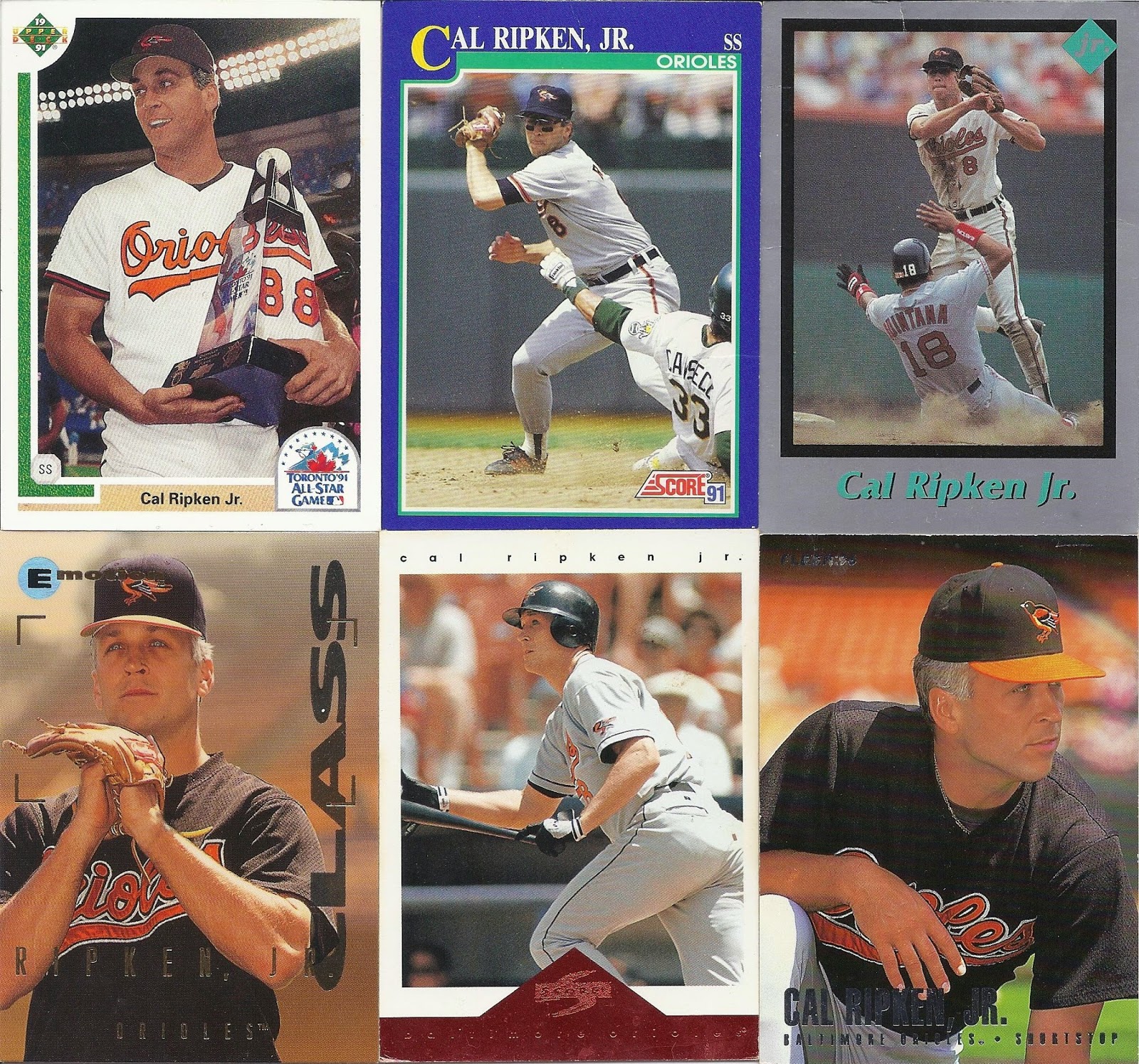 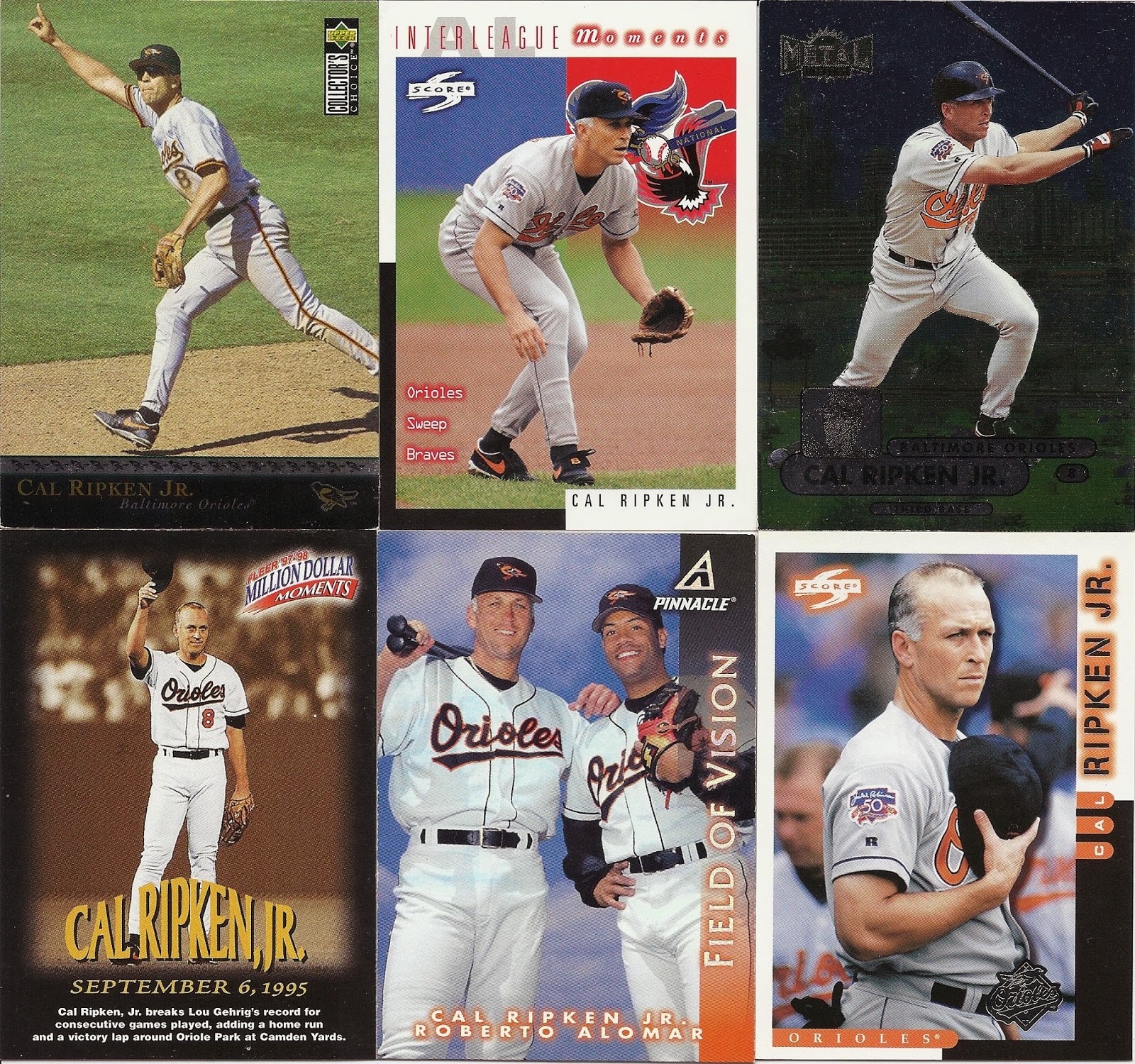 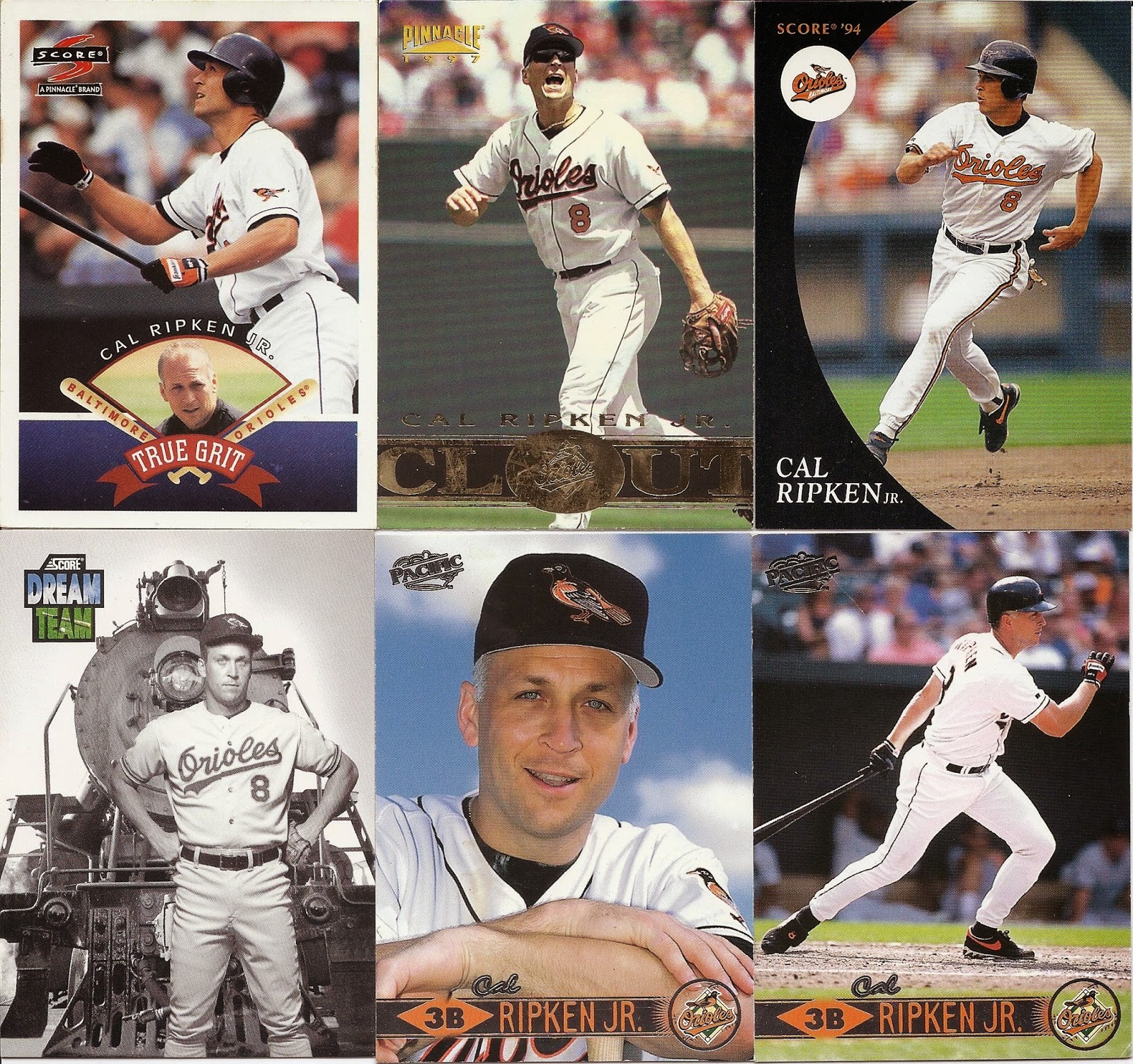 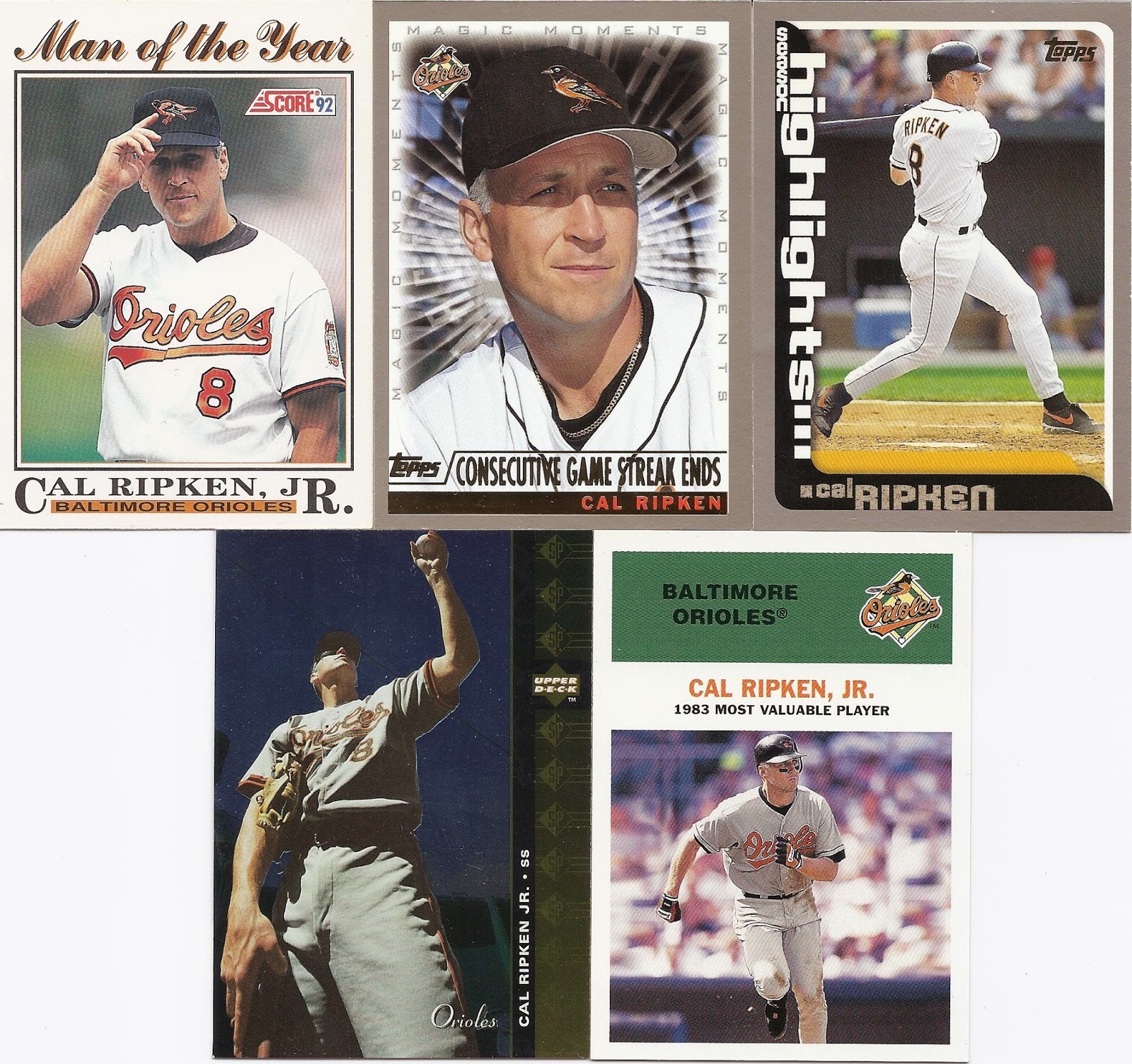 I mean, WOW.  What a great collection, and all for a sawbuck.  I don't even know what some of these cards are.  This fellow did his job well.

So that's what I wanted to show you from the binder pages I picked up.  I also landed a '99 Beckett from right before the crash (I think?).  All the prices are super-inflated, and some of the ads suggest the whole PED thing hadn't happened yet.  I'll probably make a post about that eventually...

Thanks for reading!
Posted by The Junior Junkie at 10:26 PM