Way Too Many Words About 1996 Pinnacle: Part Deux

[This post is a sequel to my original 1996 Pinnacle post, so read that one first. Or don't, you rebel you.] 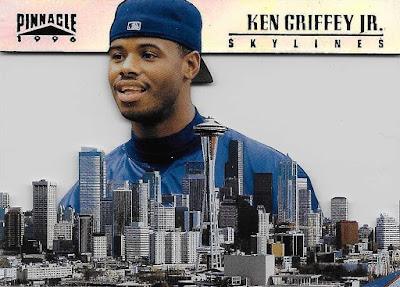 You know that thing when there’s a checklist of cards that are all relatively easy to obtain except for one that is just damn near impossible? Then you actually land the impossible one and figure, “Shoot, might as well knock out the rest of these?” That’s what happened with me and the Griffeys of 1996 Pinnacle.

I’ve already done a pretty thorough write-up on the 1996 Pinnacle brand (which you can read here and which contains my personal favorite crazy disco Pinnacle insert possibly ever) and my strong feelings towards it. Yet, as I’ve been on a 90’s kick of late and found a tremendous deal on the white whale of the set, I just went ahead and dumped a few dozen bucks (why doesn’t anyone ever measure money in dozens? I enjoyed that just now) onto COMC and started picking off the remaining inserts.

Since I’ve already shown the regular versions of all the base parallels here, we are going to begin with the inserts today; but before we do, let’s talk about Pinnacle’s inserts for a sec. The inserts this year fell into one of three fantastically-90’s categories: clear acetate, Pinnacle-exclusive Dufex, and the rarely-see matte-black-meets-holofoil combos (my personal favorites). Of these the Dufex are by far the most common and the most singularly Pinnacle. Now, 20 years later, clear cards can be found in common dime boxes and even the matte black/holofoil combo has made it onto some Topps cards recently, but Dufex remains proprietary and exclusive to Pinnacle. Panini did bring it back for the Team Pinnacle insert in the apparently one-and-done 2013 Pinnacle reboot, but apart from that the cool printing method remains woefully underused.

Let’s start with a bang - here’s that white whale I promised you: 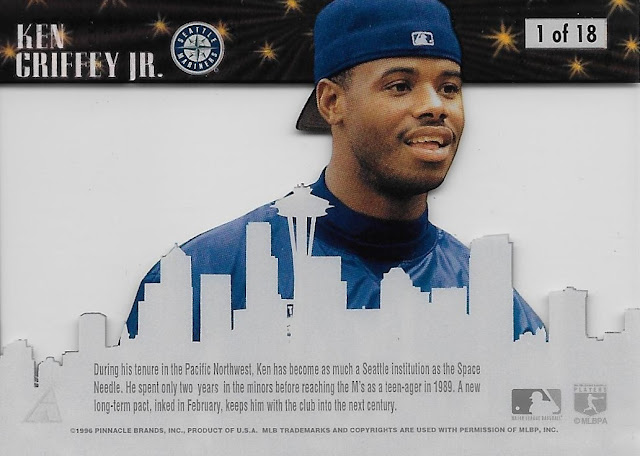 The unparalleled star of the ’96 Pinnacle show is the infamous Skylines insert. Despite its dubious popularity among ‘90’s collectors, this card remains shrouded in relative mystery, particularly when it comes to its scarcity and value; but I’m here to put all that to rest. Here’s everything I know.

Skylines was available only in magazine and jumbo packs of 1996 Pinnacle. They were seeded at 1:50 magazine packs and 1:29 jumbo. Usher (yes, Usher) has a complete set in high grades registered with PSA. The Griffey sells on eBay pretty regularly between $150-$250, far more than most inserts seeded at 1:50 packs. Those prices suggest an insertion ratio closer to 1:hundreds. So why is this card so hard for collectors to find?

Answer: because the packs they were in were hard to find. I remember Pinnacle hobby and retail boxes being fairly easy to come by, but I had no idea jumbo packs of this product even existed. And I only just learned what a magazine pack is. From MarkGrace.com of all places: “Magazine packs were available at large retailers like Walmart and had a punch hole top flap to the wrapper so they could be hung on store display hooks.” Oh, so they’re called magazine packs because they hang on hooks like magazines (??).


“Don't let the odds fool you -
1996 Pinnacle Skylines Cards from this set were inserted 1:29 jumbo and 1:50 magazine packs, and both packs were hard to find.”
-Magicpapa

Add to that the fact that it’s from a large, 18-card checklist which makes pack-breaking for a specific player an expensive endeavor. I remember retail packs like Pinnacle going for around $3.00 a pop. Magazine packs (if you could find them) were probably a little cheaper having only seven cards compared with the 10-card regular packs. Let’s say they went for $2.00 a pack. Do the math and that’s $1800 to pull a complete set and guarantee a specific player. Them’s Usher prices.

Then add to that the fact that, like it or not (many don’t), Skylines is a significant design in the history of acetate. We were just getting into the swing of the wacky mix of materials and printing methods that defined late 90’s, um, “cardboard.” If someone were to make a list of famous acetate card sets, this would no doubt be on the short list right next to Cut Above and Destination Cooperstown from E-X.

Finally, one of the biggest factors contributing to the high price of this insert is the use of city skylines right in the design. I can assure you that any Griffey collectors who are from the Seattle area or who are also Mariners fans (and I would bet that 99% of Griffey collectors fall into one or both of those categories) would love a copy of this card, and so would every other fan of every other city represented. That combined with the scarcity of the thing has probably resulted in more than a few bidding wars for Skylines cards, driving the prices up. After all, putting the player’s city right across the card front is essentially the cardboard equivalent of Axl Rose screaming “What’s up, Seattle?????” into the mic just to get the crowd all worked up (before running off the stage ending the show early and because someone in the crowd flipped him off or something because Axl Rose).

I’ve seen a lot of negative reviews for this insert from a lot of different collectors, and I honestly don’t understand what the problem is. I think the design is really cool. Plenty of other cards have used city skylines in their designs, and few better than this. Sure it looks a bit like Junior is a giant Godzilla-esque creature here to devour the city, but what about that isn’t awesome? Is that just resentment towards the hefty price tag? Haters step off: Skylines is the bomb.


Plus the Bonds includes a shot from the Full House intro.

The “Skylines” insert was used again in 2000 Skybox, but it’s not expensive. Don’t be surprised to find one in a dime box, you lucky devil. 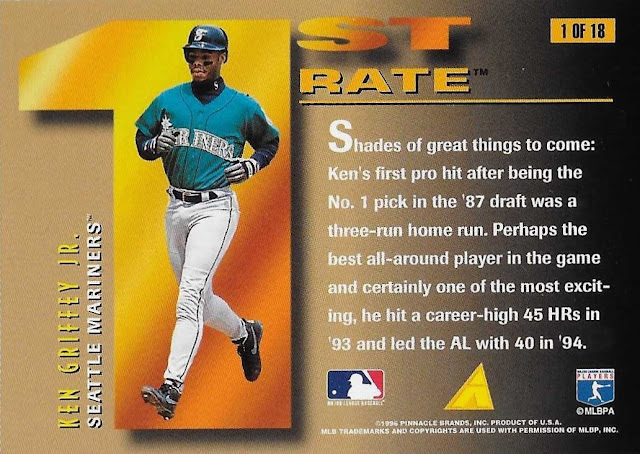 Here’s one that falls under the Dufex category. Where some cards are simply Dufex for the sake of Dufex, here the swirl plays nice with the action shot of Junior deep in mid-swing. Big and bold and characteristically Pinnacle. 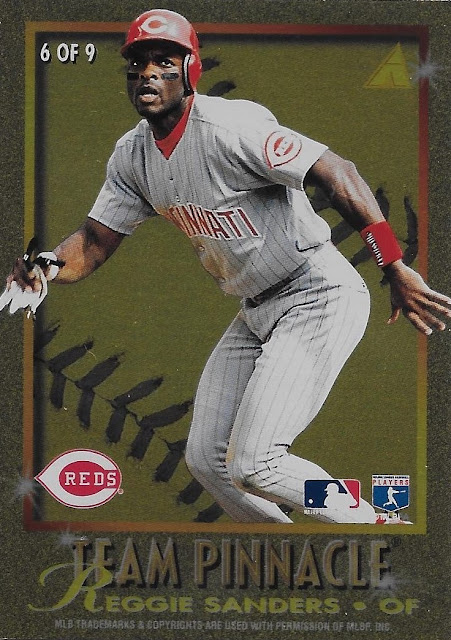 More Dufex for the familiar Team Pinnacle insert. I'm happy to report that Griffey made it onto every imaginary team Pinnacle cooked up in their short lifespan - from Team 2000 to Z-team. He also got the slightly cooler Dufex side of this double-sider. Reggie Sanders got stuck with the slightly less-intriguing gold foil side. Tough luck, Reg. At least you made the team. 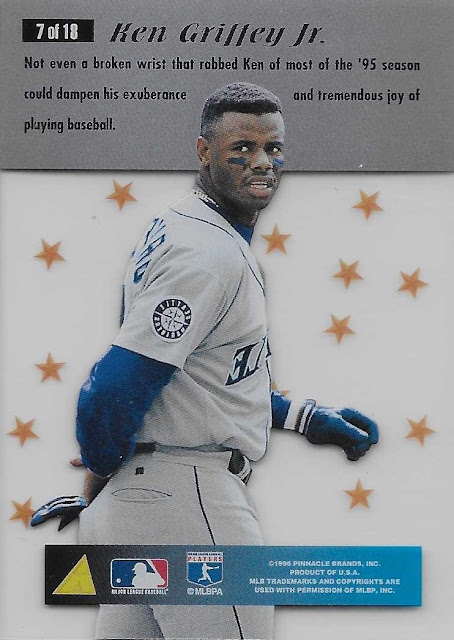 As acetate cards go there are cooler ones out there, but few are more beautifully-assembled than this. We have a rare, noticeably hatless photo against a field of bronze stars and a prominent holofoil banner. Great fonts, a cool nameplate, and a dreamlike feel make this a personal favorite, arguably more so than the Skylines insert. 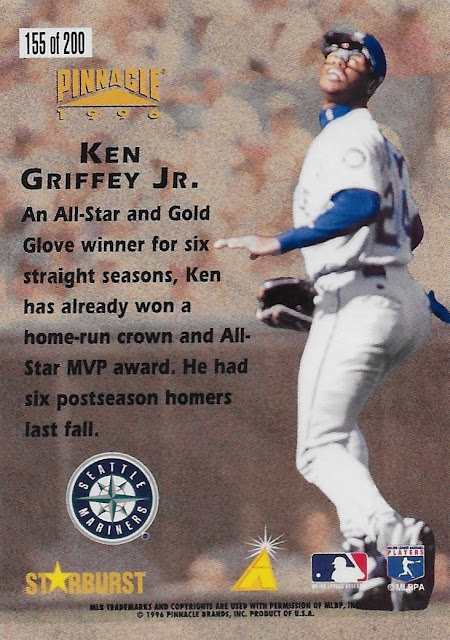 Here we get to see the parent-teacher conference in the dugout through radiating bands of shiny Dufex. It doesn’t fix completely the clunky angles of the gold foil below, but it helps. 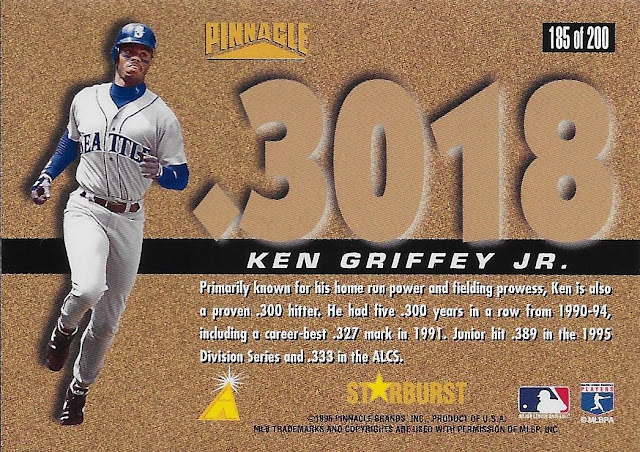 Here is a rare case of obtaining the rarest version of a parallel before the not-so-rare one. Unlike the rarer counterpart, the lovely swirl here is not broken up by clunky text stamped all up in the Dufex. Feels good. 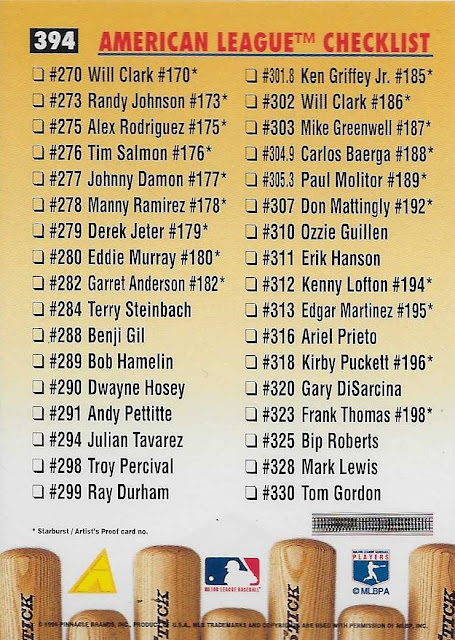 Not much to speak about here – just a mystery foil version of one of Pinnacle’s many superstar checklists. I’m still not 100% on where these foil versions of Series 2 cards come from. 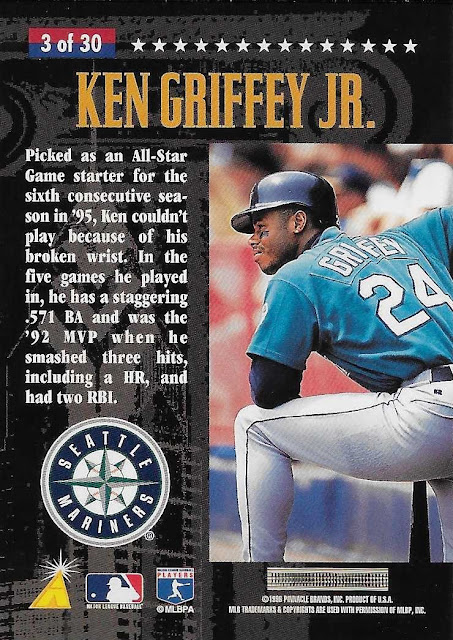 These were pulled from 2-card giveaway packs at the event of the same name. Pinnacle sponsored the Fan Fest for three years in the 90’s (Upper Deck sponsored a lot more), and of those this the my personal favorite probably because the design appears to borrow from 1995 Leaf’s 300 Club insert, and I love me some ’95 Leaf. While not particularly rare and not technically an insert from 1996 Pinnacle, they’re great-looking cards and a must for any Philadelphian Griffey fans out there.

So that’s all the inserts and the vast majority of the parallels from 1996 Pinnacle. No, I’m not 100% done just yet. I do still need:

But these are all just simple parallels of an already parallel-esque insert with little difference to speak of than their slightly higher rarity. At any moment I could say screw it and grab them all for 15-20 bucks a pop, but I’m in no hurry. I’d rather set my need for instant gratification aside (for once) and wait out some good deals. I’ll tell you all about it when I do get a hold of them.
Posted by The Junior Junkie at 8:00 AM