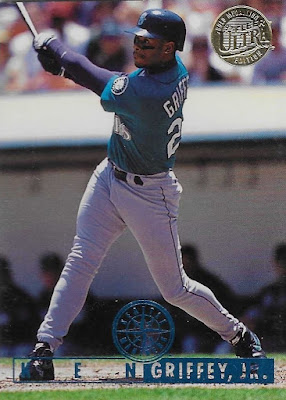 This is the Ultra product I bought the most of when I was a kid. I still have some of the cards I pulled from packs.

1995 Ultra gave us something new: a parallel that applies to every single card, not just the base set. That means every insert, even the rarer ones, was available in the 1-per-pack Gold Medallion parallel. This characteristic of Gold Medallions made for some infamous cards the following year like the 1:2880 Hitting Machines and 1:720 retail-only Thunderclap. That year Gold Medallion inserts were about as common as a team logo on a Panini card. I  considered titling this post "The Medallionator," but that distinction definitely belongs to the '96 set.

In 1995, the first year of Gold Medallions, they were still pretty gettable. The most difficult GM pull was the 1:370 Power Plus with Hitting Machines and Home Run Kings just behind at 1:80. Not that 1:370 packs is an easy pull, (1:2220 for a specific player when you factor in the six-player checklist), but in terms of market value there seems to be some overshadowing of the ’95 Gold Medallions by the super-scarce ’96 ones. Case in point: at the time of this post the rarest Gold Medallion insert in 1995 Ultra can be had for around five bucks. Visually it may be missing the die-cut sizzle of ’96 Hitting Machines, but it’s still a heck of a value.

I happen to have a lot of the inserts from this characteristically ‘90’s set, but this one is the best: 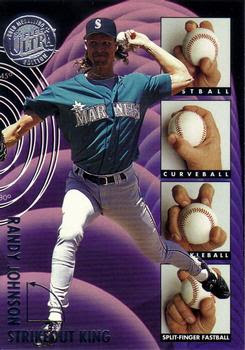 I remember the first time I pulled one of those Strikeout Kings cards – I thought it was the coolest pitcher-based insert I’d ever seen. I still do. The only insert you won’t see here is RBI Kings which Griffey was not in and which I’m not all that crazy about anyway. 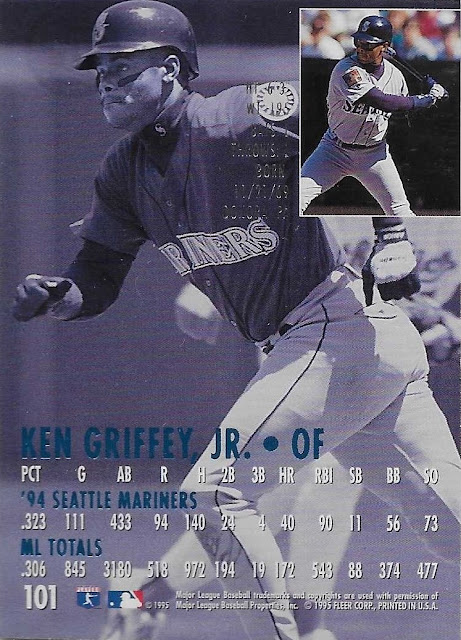 Griffey’s swing is not a swing as I considered it back when I played little league (1991 Girard Playground 9-10 champions, y’all!), which was as a means to punch the ball at the right moment and angle to launch it…well, anywhere, really. Anywhere is good, so long as I hit it. Griffey’s swing doesn’t look like that. It’s looks more to me like a calculated placement of the ball. It’s almost like slow-motion. You can watch the bat gently take possession of the ball and carry it to where Junior decides it ought to be, which was often over the right field wall.

This picture captures that well, I think. The focus, the twisting torso, the angle of the bat – you can see him aiming to give that ball as much lift as possible. Textbook Junior.

As for the back, I’m a fan of the multicolored foil, the team-colored shading, and the photos. And I can tolerate the abbreviated stat box. But fella, there is room for a blurb here. Give me a sentence, anything.


This is the set that for the first time made me question the whole idea of parallels. There were some cool ones in the 90’s: Topps Gold, Finest Refractors, and Upper Deck Electric Diamond to name a few. But something about Gold Medallions always seemed wrong. I mean, it’s just a little stamp. A foil stamp over an already foil logo. It’s got no real comparative advantage with the base card – it’s simply there or it isn’t. Heck, some Gold Medallions aren’t even gold. Even as a young teenager I resented this parallel. 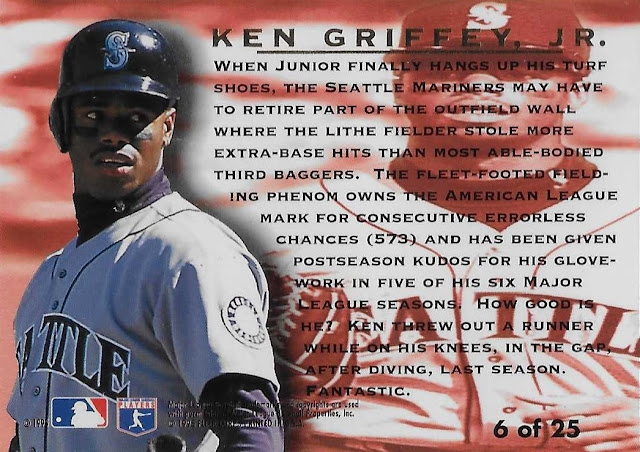 This is just a brilliant card. It’s a rare horizontal design from Ultra with its own ideas on what makes up a color palette on a baseball card: pink and white punctuated with gold foil. And it works! Who knew? The blurb on the back is also damn entertaining with its touch of alliteration, rare use of the word “lithe,” and cunning use of commas for dramatic effect. Bravo.


And of course, the medallion thingy. 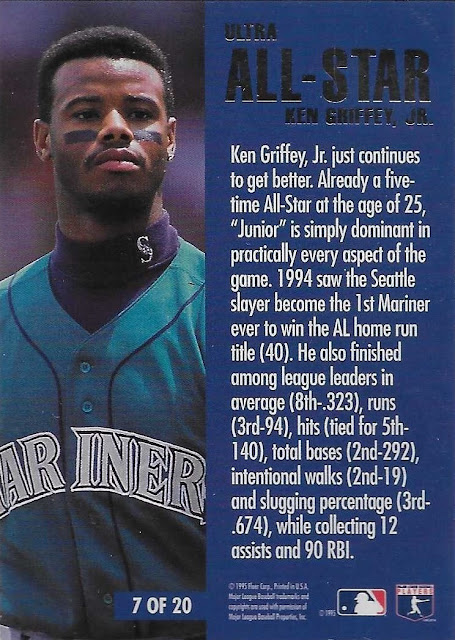 The positive/negative effect of the photo/color field in the text mirrors that of the foil in the base card name plate. Plus we get three nice photos on one card and a decent blurb on the back. Overall a solid All-Star insert.


My only complaint is that silver Gold Medallion. You can’t tell me there wasn’t some debate about that at Fleer headquarters. It was probably a money-saving measure as there is already silver foil on this card. Not to sound like a Polly Pickypants, but it just doesn’t look right. 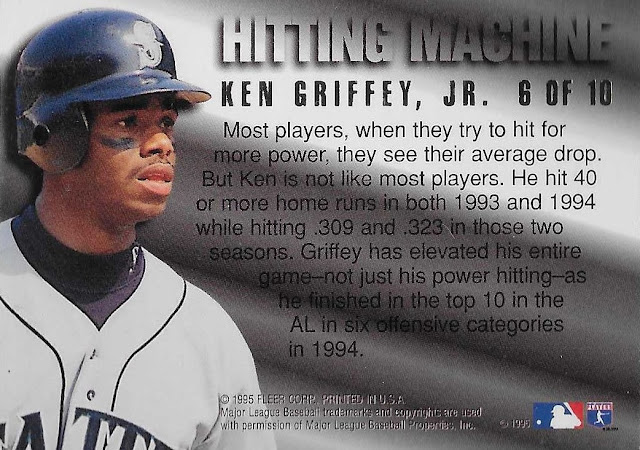 Now we’re talking. This would become one of the great insert series of the ‘90s, usually involving intricate die-cutting, textured foil, or both. This first iteration of the insert is not terribly fancy, but it did signal better things to come (including one of the rarest Griffey pulls of the ‘90’s).

This year it was just the large, stately text backed by the gears and machinery that would be the focus of later Hitting Machine designs. That’s definitely the inside of a wristwatch, by the way. You can tell by the ruby-colored synthetic jewel on the left half of the “A,” a component they add to the mechanism to reduce friction in automatic watches (you didn’t know The Junior Junkie was an amateur horologist, did you?).


I'll have a higher-quality scan of this one soon enough. Consider this one a placeholder. 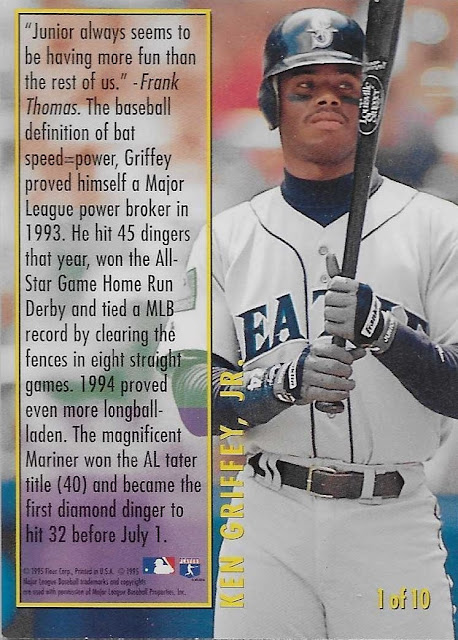 The photo works perfectly here with the vertical insert name. Check out the images in the colored boxes: “40” in the home box, home plates in the run box, and crowns in the king box. And the blurb has some fun alliteration and a great Frank Thomas quote. Fleer put some real thought into this one, and it shows. 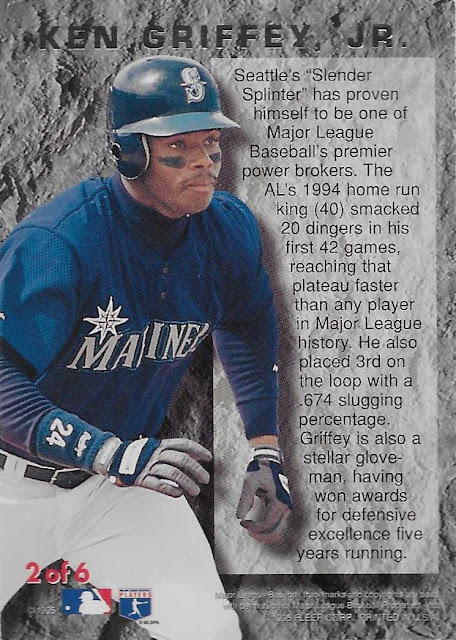 While not the prettiest card on Earth, at 1:370 packs this is the rarest insert of’95 Ultra and the real beast of this set. Strobing rainbow does it for me (see also: my 1989 Donruss addiction), but there’s really not too much to this design. It’s just rare. That gold foil team logo at the bottom makes a cameo on the Award Winners insert.


I usually like to gush just a little (sometimes a lot) about how rare a particular card is when I’ve chased it for months (sometimes years) and finally have one to show you; but I can’t really do that here. Sure the card is rare, but it’s also the most affordable 1:370 ‘90’s card you may ever see. The demand just isn’t really there for one. But I do recommend you hurry up and snag one before other people read this post!

As parallels evolved Fleer did eventually figure out Gold Medallion and even added the ultra-rare Platinum Medallion variation which continued well into the next century. And any fan of 90’s cardboard knows how much progress was made with the Hitting Machines insert. While not terribly popular, this was actually a groundbreaking little set for Fleer. Well done.
Posted by The Junior Junkie at 10:35 PM