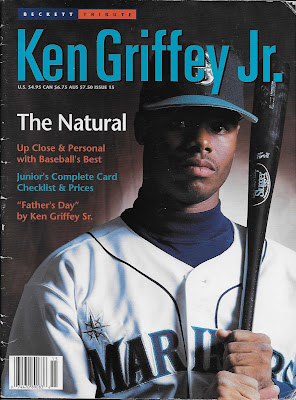 Some of you may remember I began a difficult project last year with a very precise deadline. I challenged myself to complete the once-impossible-seeming Beckett Ken Griffey, Jr. Tribute checklist from 1996, and I gave myself until December 31st, 2016 to do it. The year is definitely winding down, so I figure it’s time for a progress report.

Luckily that didn’t matter much as I’ve made a ton of progress (more than someone with a newborn ought to). I’ve been keeping up with new Griffey adds on COMC, and I kept a very detailed list of eBay followed searches. The result is that I am now a whopping 96% complete the full list.


Look at all those checked boxes!

There are only 28 cards left to get over the next 4 months and 2 days. That’s 124 days or one Griffey every 4.43 days. While I do have leads on a half dozen or so of the remaining Griffeys, and none of those I need are particularly expensive, some of them are proving rather tough to find. Here are the real bears of the final 28:


I expect this to be the most expensive card left to get. There are estimated to be about 700 of them floating around, and in 1994 numbers that’s a damn small amount. The only one I’ve seen available is a PSA 10 on eBay for $325.00. I’m going to hold off on that and try for a loose one.


At 1:36 packs and in a checklist of 450 cards, pulling an AP of one of the four Griffeys from ’95 Pinnacle was a rare feat. I’ve got the base card which is historically the priciest of Junior’s cards within a given parallel. The other cards are two checklists (one of which has three other popular players on it) and the totally badass Swing Men subset. We’ll just see how this one pans out.


If I had to guess what the final holdout is going to be, I would guess one or all of these (the Gold versions, I mean). The most annoying thing – they’re just game cards. As baseball cards there’s nothing especially great about them (the back is contest rules for goodness sake). They’re not even super expensive – they’re just super scarce. I suspect I’m one of the only idiots looking for them.

Parallels like these are proving to be some of the toughest gets. Take the 1996 Ultra Gold Medallions, for example. 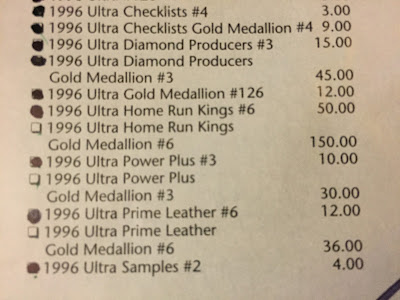 This was the year Gold Medallions really started to mean something. What’s silly about this is that I already have what is far and away the toughest one to find: the 1:2440 pack Hitting Machines insert (not on the list, but come on). The rest of these pale in their relative rarity. Really, it’s not even close; and yet it’s these significantly easier finds that I’m having the hardest time tracking down.

On the other end of the spectrum are a handful of cards that are not particularly rare at all – it’s just that nobody is bothering to sell them. 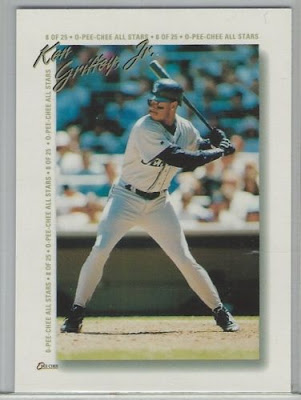 This O-Pee-Chee redemption jumbo is one of them. I already have several of the much rarer gold foil version, but the crappy regular has been eluding my collecting crosshairs all year. I suspect someone out there has it and isn’t bothering to sell it because they figure it’s not worth the effort. 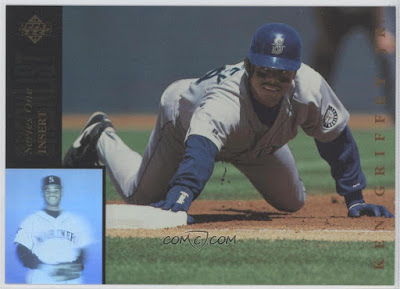 Then there’s the 1994 Upper Deck Jumbo Checklist #4. Look on eBay and there are dozens of every other card in this 4-card checklist…well, checklist. But #4? There is only one, and dude wants thirteen bucks plus seven bucks shipping. He’s dreaming. 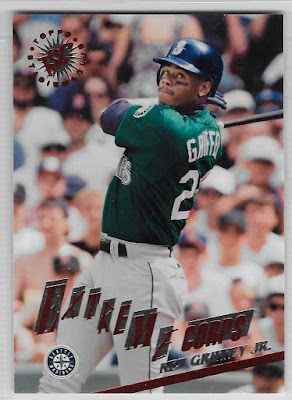 And the 1995 Stadium Club #521 Extreme Corps 1st Day Issue! GAH! Now 1st Day Issue parallels have never been particularly easy to find, but I have literally every other 1st Day Issue card from every other year including the more expensive base cards, and this parallel I’ve never cared for is the one giving me trubs.

Don’t let these cards fool you, though. While it’s true that numerically this project has been a rousing success (I’ve averaged one new Griffey from the list per 3.4 days, which is ahead of my original goal of one per 3.5 days), what those numbers don’t take into account is that the remaining checklist is the most challenging part. Which brings us to prediction time.


Will I be able to finish this thing off? Honestly? Probably not. The numbers may look favorable in black and white, but the truth is that with every card I land the average scarcity of the remaining cards goes up dramatically. If I had a few more months I would be more optimistic. I just don’t think I’m going to be able to find every single one in this final stretch. It won’t be for lack of trying, but I cannot control the supply.


On the other hand, will I ever finish the list? Yes, I will. Regardless of whether I get past the finish line before my self-imposed deadline, I am confident it can be done. It may end up being a 21, 23, or even 40-year checklist; but dammit, I’m going to make it happen in my lifetime. Then I’m going to rent a time machine (cheaper than buying), go back to 1996, and show 15-year old me that it is, indeed, possible. I’ll also show him how bald he is going to get. It’ll be a bittersweet day for him, that’s for sure.

Here's the remaining list which I pretty much have memorized now:

I'll continue logging my progress with the list via the "Official Griffey Want List" tab at the top of this page, even if it takes us into 2017 (which is pretty likely at this point). Here are the full-page scans of the want list at the time of this post. 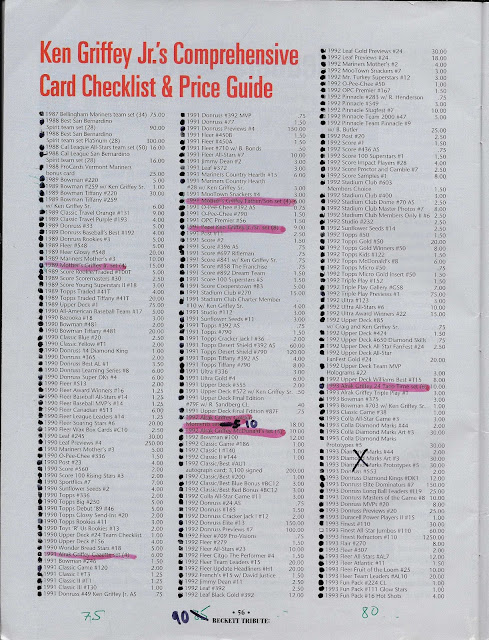 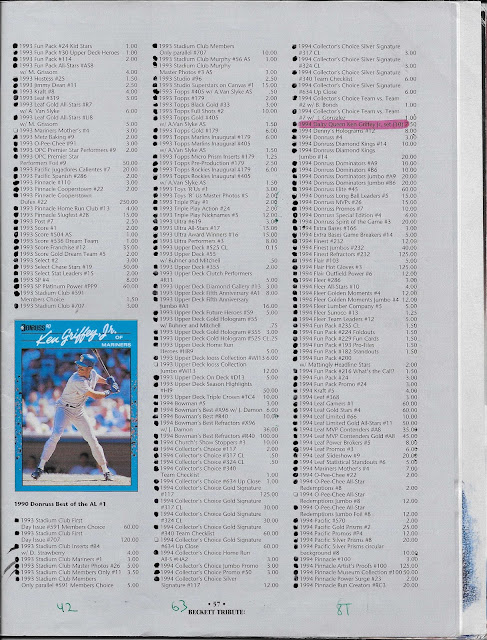 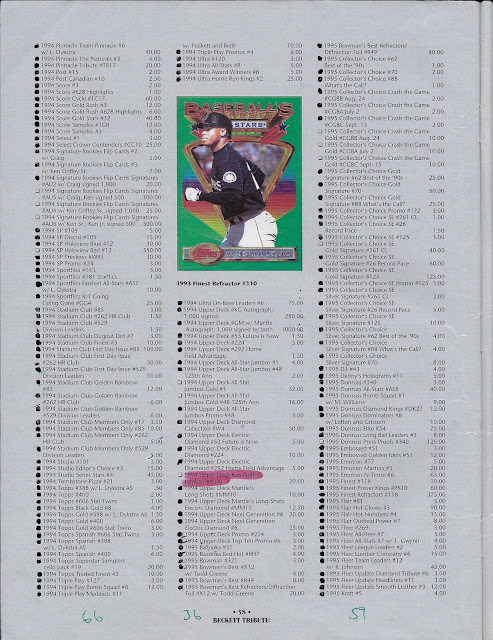 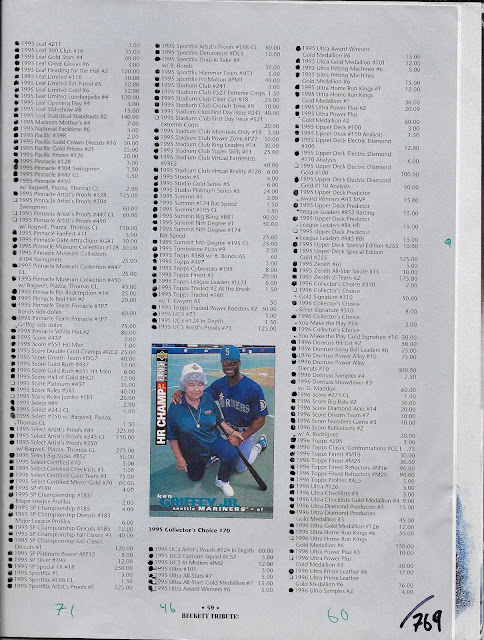 Fifteen-year-old me is excited out of his mind.

Thanks for reading!
Posted by The Junior Junkie at 10:28 PM