Sorry it’s been so long, fellas. I do miss ya. I miss blogging, trading, and cardboard in general. A few other things I miss are alcohol, staying up past midnight, cursing openly, sleeping past 6, and going out whenever I damn well please; but life has changed a lot since last March.


I go to bed at 9pm every night now. My wife and I can usually be found in the kitchen washing bottles, preparing fresh bottles, cooking dinner, eating said dinner standing up, and wrangling alphabet magnets from around the fridge, all while singing, dancing, and generally entertaining the little one. None of our meals are entirely ours – some of it is broken up into tiny little bits for the boy; and even then there’s no guarantee he’ll eat it. Much of it ends up flung on the floor for no reason at all (thank goodness we have a dog). I should also mention that all of this is indescribably fun and rewarding, even when it’s not. I can’t imagine life without it.

I’ve been cheating on the hobby.

A lot of my collecting effort (and budget) has gone to my burgeoning vinyl collection. I have a good reason for that: we can actually enjoy the vinyl collection together. I can put a record on and we can listen to it as a family. And we’ve been doing exactly that for a few months now – at least a record a night, always something different. We sing, dance around, play bongos. He has a little plastic guitar, xylophone, maracas, harmonica, tambourine – the whole nine. It’s really fun.


Card collecting, despite all the trading we do, is a solitary hobby; and even now as I sit poking at my keyboard, I feel like a hermit. I can hear my wife and son on the other side of the wall behind me, playing; and I’m in here, typing about cardboard. I love this hobby, but I can’t justify that.

No one knows my collection the way I do, and no one else can enjoy it. Not yet, at least. I’m allowing for the fact that someday the boy will be old enough to enjoy cards on the same level as I do, and I’m proud to say that when that happens, he’ll already have a great appreciation for music in multiple genres because record collecting is as much – if not more – fun than card collecting. 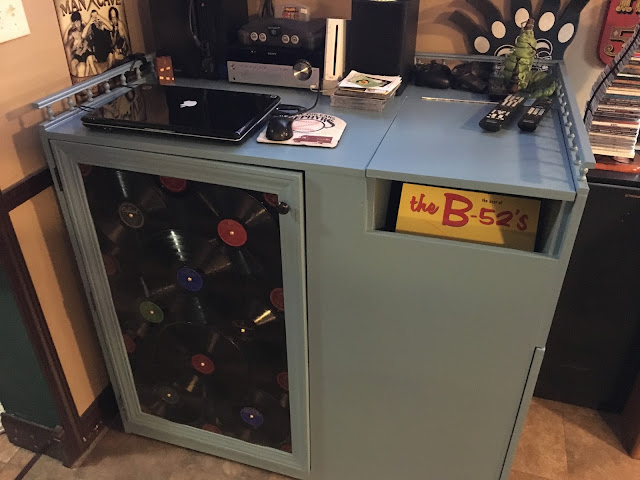 Also I've been on a hardcore furniture-building kick lately in part because no one makes furniture that can hold all the records I have. I built that cabinet you see up there, and another one for the man cave. I even made the cabinet door out of old records that were no longer serviceable as records.


So between building furniture, collecting records to fill said furniture, and oh yeah, raising a child, my time is spent. So the time has come to rethink those parts of the hobby I will stick with, and those I need to let go.

I am holding on to the Griffeys, most of the complete sets, the best trade fodder, all my non-Griffey keepers, and a few other things for when he is older and can appreciate them with me. BUT, I am letting go of a large quantities of cards. In fact, as of this past weekend the deed is already done. 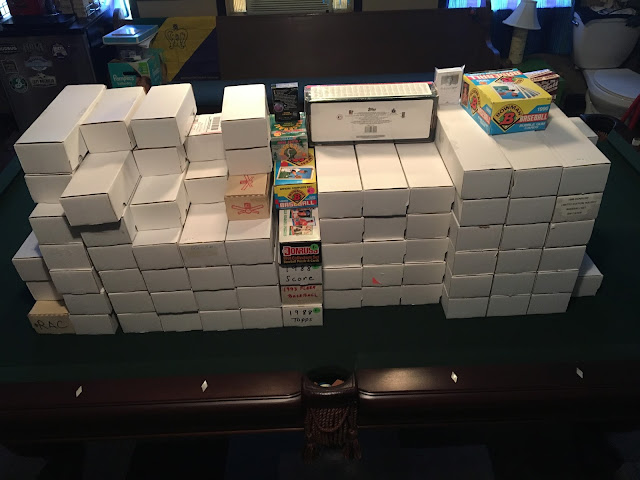 I put this massive lot of cards on Craigslist and the Facebook Marketplace for $250, expecting to sell it for around $200 – and that’s exactly what happened. While I got interested parties from both sources (a lot of folks wanted to come over and dig through the boxes, but I wasn’t having that – I just wanted them gone), I ended up pulling the trigger with a young guy via Craigslist named Jeremy. He’s a fellow collector with two kids who lives near me and totally understands my position. He's a vintage set builder, so I've linked him to a few blogs here. Now all those boxes are now gone, but don’t worry. I still have plenty to trade.

Part of me wants to start liquidating some Griffeys, too; maybe start by unloading my Griffey duplicates in one big lot, then some of the choice cards from my personal collection, specifically ones that are worth a few bucks but to which I have no emotional attachment. For now I am fighting that urge, but it’s hard. Have you seen what Griffeys are going for recently? The Crusade purple is going for more than double what I paid, and the ’93 Finest refractor is going for triple. It is bananas. This kind of seller’s market hasn’t existed since the ‘90’s. I assume it’s the HOF induction that reminded a bunch of grown-up 90’s kids how much they used to want these cards.

Speaking of liquidation, this is not the only hobby that I have been slowly backing out of. Much to my wife’s delight I have been selling off my precious poster/print collection, piece by piece. I’ve even let go of several Radiohead posters which have always been the cornerstone of the collection (like Griffey is for my cards). I’ve made a lot of Radiohead poster collectors very happy in the last several weeks as some of the posters I’ve been selling off are truly scarce and very difficult to let go. It’s been nice having an extra inflow of cash, too, as my toy instrument expense is up 8000% this quarter.


There is one area of the collection in which I’ve made some real progress, and that’s the 20-year checklist. Remember that? I probably don’t need to tell you that I did not, in fact, complete the checklist by the self-imposed deadline of December 31st, 2016; but I am ridiculously close. I think I only need 13 more cards which puts me somewhere between 98 and 99 percent complete. I can’t wait to put this thing to bed, but it is taking longer than I thought I would…

Also the Griffey Generosity Box is still out there. We should see an update via blog post from the most recent recipient very soon!

Oh, and I joined the most recent Nachos Grande group break despite the fact that there are NO GRIFFEYS in Archives this year. Grrrr....

So long story short, I’ve slowed down considerably. I still search for Griffeys and follow the hobby on social media, but I haven’t been reading the blogs because I feel guilty about not posting, trading, or even simple things like building the new flagship base set. I still buy a few cards a week on COMC, but the majority of my collecting budget now goes to Discogs, a database and marketplace for record collectors.

As for what to expect from me going forward? I’m sorry to say not much. I will not be posting with any kind of regularity. I was hoping to at least continue features like the Great Griffey Frankenset and Design Timelines, but nope. I was excited to find the time to complete my Best Griffey Acquisitions of the Year posts (here are links to Part 1, Part 2, and Part 3) back in February (a month late), but a huge chunk of that (the runners-up) got cut because I didn’t have time to put it together. Big, research-intensive posts of yesteryear are simply not in the cards – pun intended.

Still, I have a few posts waiting in the wings that I'll try and bang out of the coming weeks. And I don't even want to think about how far behind I am on trade posts.

I do ask that anyone I owe cards to drop me an e-mail/tweet/whatevs and I will send you stuff. I’m sure there’s a ton I meant to send out that’s slipped my mind completely (because I suck at this now).

Again, I’m still collecting Griffeys, buying the occasional pack, and sniping new Griffeys on eBay and COMC semi-regularly, but card collecting as a whole has taken a back seat where it is nestled between a diaper bag and a car seat base. Oh, and it’s sticky for no apparent reason.

Don’t give up on me yet, though. Keep me on your blog roll. This post is not me bowing out of the blogsphere – quite the opposite. I’m letting you know that I’m still here, and I still plan on surprising you every now and again. Like today. Surprised?
Posted by The Junior Junkie at 8:02 PM