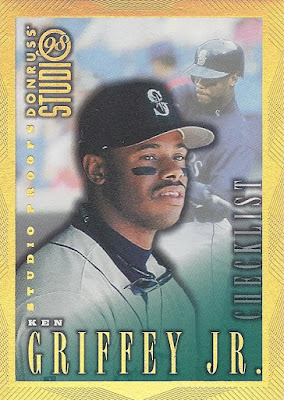 Studio is to the Pinnacle brands what Gallery is to Topps; and if you’re as big a Gallery fan as I am, you probably like Studio, too. Typically as a brand evolves you see a shift in the general theme of the set, but that didn’t happen quite as much with Studio. Even in 1998, seven years after their inaugural set, the focus is still very much on the portrait, even going so far as to include a set of Glamour Shots-style 8x10’s. It shouldn’t be that big a deal that a set is able to stick with a theme for so long, but it is.

And since this set came out in 1998, there are plenty of inserts, parallels, samples, and variations to talk about. Let’s dig in…


There are Studio designs I like better than this, but not many. And while I like this backwards-cap photo, I am positively smitten with the Swingman logo on Junior’s …shirt? Would you call that a shirt? Anyway it’s baddass.

One thing Studio began doing not long into their timeline is ditch paying for portrait studio time and start being selective within the pool of existing photos. I always assumed it got cost-prohibitive to get every player in the checklist to a photo studio to take pictures, so I really don’t blame Donruss for the change. In fact I appreciate the creativity and relatively high standards in their photo selection. 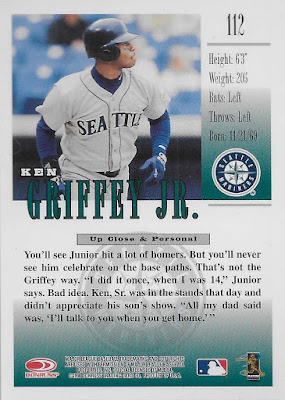 The card back is fairly standard with that characteristically-Studio total lack of stat box in favor of a bit of inside information on the player. Here we get an anecdote about how Ken, Sr. first taught Junior to beware the path of pride which is the very lesson Hrothgar taught Beowulf after he defeated Grendel and Grendel’s mother. After this Beowulf went on to become king of the Geats, and Griffey went on to hit 56 home runs in 1997; so you know it’s got to be a pretty valuable lesson. 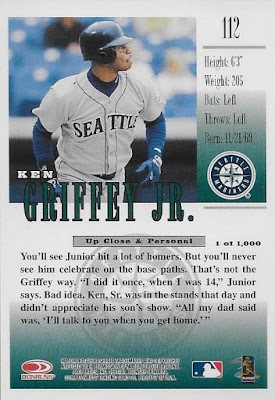 Now THAT is a freakin’ parallel! You hear me, every other card brand in history? THIS IS HOW IT’S DONE. You want me to blow reams of my hard-earned scrilla on pack after pack of your product so I can land your little parallel? Well I’m not quite as willing to do that if said parallel is as boring as doing your taxes. I don’t want tiny stamps or little circles of foil, guys – I want centimeter after square centimeter of retina-blistering holofoil. This is the most common parallel in this set and completely lacking in die-cutting, and it’s still better than 80% of the parallels that have ever been made. God bless you 1998 Studio Press Proof. You get it. 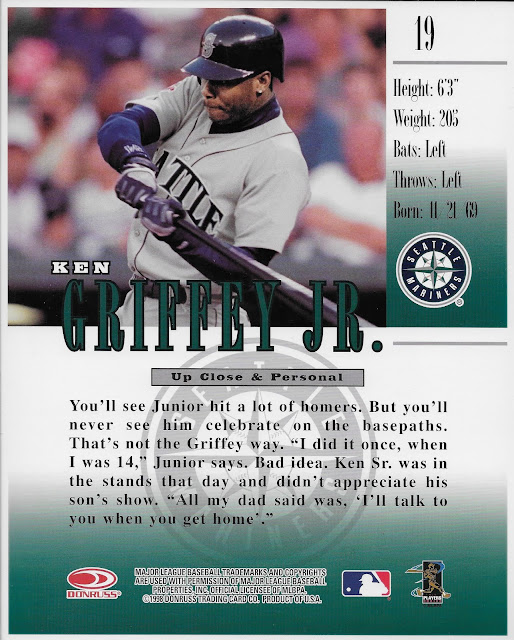 Here is a big, giant version of that base card. They did us a service by tweaking the photos on the front and back at least a little bit. That doesn’t seem like that big a move, but the way photos are reused and recycled these days even across different inserts within the same set, having different photos here is a treat.

I even have an autographed version: 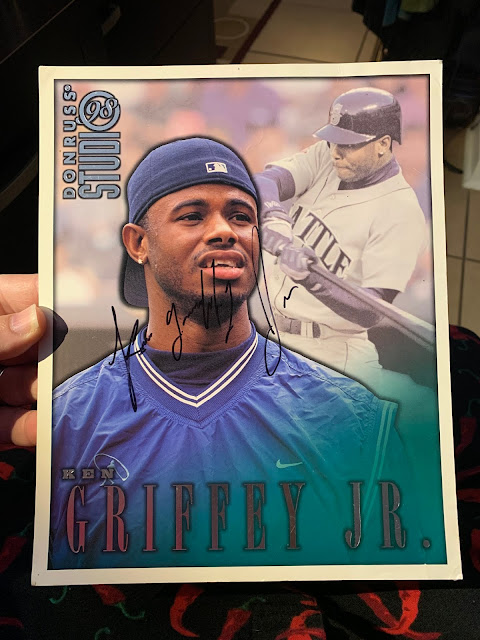 I have no clue who autographed it, but I’m very, very proud of it I think or whatever I guess and stuff. VERY-ish. 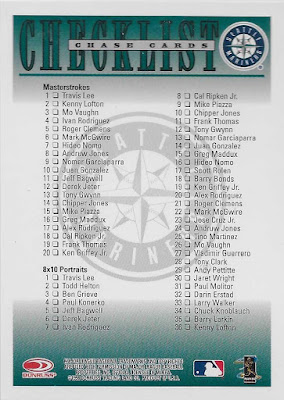 The unnumbered checklists use the same design as the base cards and 8x10’s but with different photography and a surprisingly attractive back. Pretty darn nice as checklists go. Strong B+. 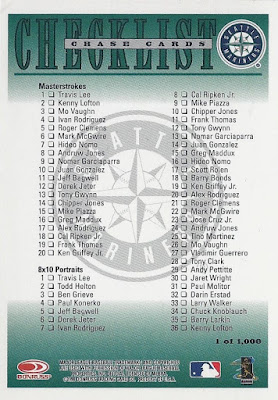 Here’s more of that sweet, sweet Press Proof sugar – or as I’m going to start calling it, “God’s own parallel.” Look upon it, ye boring-ass mid-90’s Stadium Club First Day Issues, and despair. 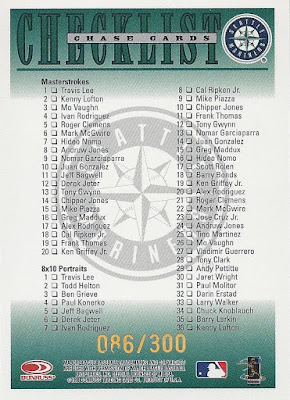 The gold is over three times as rare and yet I still like the silver better. The only real difference is that fact that the gold was serial numbered in holofoil.

Bruh – EVEN THE SERIAL NUMBERS ARE IN HOLOFOIL. 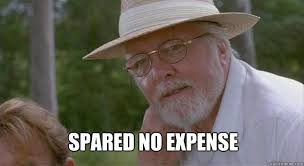 
Baseball cards as a medium lend themselves well to photography-themed inserts, and a few took it a step further by going meta and incorporating film right into the design. I think I list these off every time I bring up such inserts, and I have no reason not to do it again here: 1997 SP Game Film, two years of Stadium Club Capture the Action Game View, a couple of years of Leaf Slideshow, and a couple more of this one, Studio Freeze Frame. All of them are just delightful. 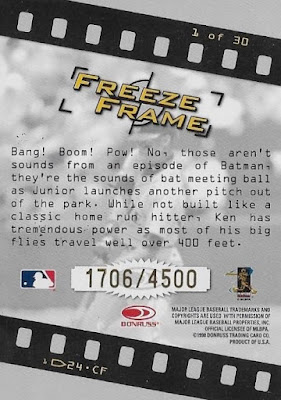 That said, this one is the least desirable among them. It’s very shiny, and I like the design in general. I think it’s especially cool the way they work the number and position into the film on the card back. And I really want a taste of the meth that blurb writer was on. I mean, come on – Batman makes an appearance. The hell, dude? Who you think you are with them wacky-ass blurbs? Skybox?

But overall the card is dark and scans horribly; and on top of all that I’m also not totally sold on all that empty space above and below the diagonal film strip. Not a bad card; but as film cards go, this is the weakest of the lot.


A buddy of mine has his Dad’s original vinyl pressing of Abbey Road, and the legend goes that his Dad hated the song “Maxwell Silver Hammer” so much that he scratched it out of the record. Like, he literally took something you should never touch a record with and ssscccrrraaaattttchhhedd it out. The moral of that story is that one way to get rid of something you don’t like is to remove it completely, and Donruss did exactly that for the first 500 numbered cards – they just cut off the excess to match the angle of the film strip. Yes, this version is rarer and more expensive, but to me the design is also more or less saved by the die-cutting. That being said, I think Abbey Road would not be improved by the removal of “Maxwell Silver Hammer” and remain horrified at my friend’s Dad’s actions to this day. 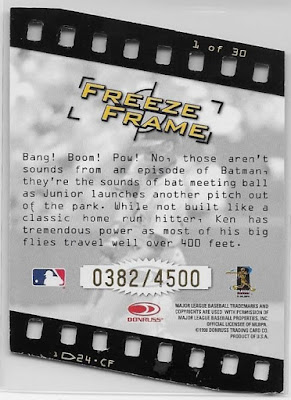 There are only 500 of the die-cut version (again, the first 500 of the total run), the same number as there are the 1997 SP Game Film insert. Even with the die-cutting, if you are ever given a choice between the two, go with Game Film.

There is an uncut sample version of Freeze Frame numbered “XXXX/5000” currently on COMC that somebody is way too proud of. If I ever come across one for $20, I’d be a buyer. Above that I don’t see the appeal. 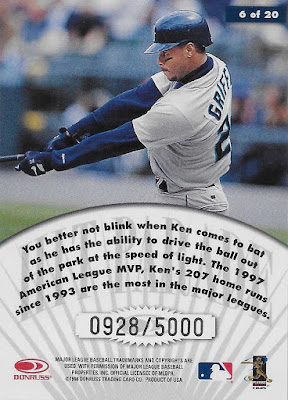 Hit Parade is the most common hit in 1998 Studio even counting the parallels, but you would never know it from the design. Every bit of this card outside of the player silhouette is either team-colored spikes or textured foil, even in the giant “Hit Parade” lettering. You can tell somebody put some real thought into this design (check out how the arch of spikes also makes an appearance on the back). I think this card also could have benefited from some wacky, spiky die-cutting, but you can’t die-cut everything. I suppose. 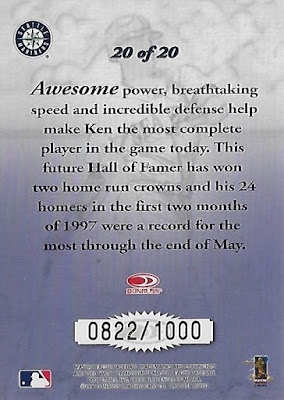 This insert has a few neat things going for it. The title font is great (though the nameplate is a bit sterile), and the card stock has a canvas feel. The theme here is a pencil sketch that morphs into an action photo, but at the bottom is a paintbrush where maybe a pencil would have made more sense. Also the title suggests painting, but that ain't no painting - it's a sketch. Maybe call it Mastersketches?

And for the record I really do like the TWO SQUARE INCHES of shin illustration here, but it's a bit understated for how cool it is. Maybe flip-flop the photo and drawing bits so it's not just the space below his knees that gets the treatment that is the theme of the whole insert? There should be 10,000 of these. No one should have to pay /1000 prices for these pretty but overall underwhelming things.

I am happy to say I have pretty much all the Griffeys I really want from 1998 Studio; but technically there are a few I still need if I’m going to finish off the Griffeys:

Backdoored cards carry a hefty premium, so I’m not desperate for those. My faves here are the Freeze Frame die-cut and the Silver Studio proofs, and I have those. The rest will come.
Posted by The Junior Junkie at 8:30 AM