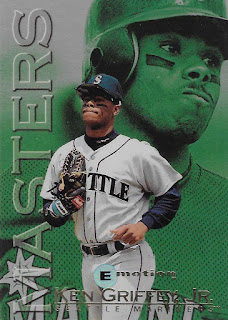 OMG I freakin love this set u guyzzzzz.

Skybox owned Fleer, so I’ve always treated them more or less as interchangeable; but there’s no denying that Skybox cards tend to have a flavor all their own, and it all started here.

You’ve got to hand it to them for giving us something totally different. The cards have the feel and build of Flair – nice and thick, glossy, plenty of foil – but while Flair slanted high-end fancypants, Emotion slanted high-end modern. Where Flair went Queen Elizabeth, Emotion went Megan Markle – still royal, but cool, accessible, and hot by any standard.


Full-bleed was the norm in the high-end by this point (unless you were Donruss), but Emotion flipped the focus from the nameplate to one large, stately adjective unique to each player. The nameplate is still there, but it’s hardly the first thing you see. I love the subtle use of gold foil here. It’s fancy without pretension.

One issue I always had with this set is that the words emblazoned in large letters across every card are hardly ever emotions – they’re adjectives. And “Junior,” while it seems like they’re referencing the noun here, is also an adjective; but in that respect it doesn’t make a ton of sense here unless we talk about his father or how young he is, which we don’t. Nothing wrong with any of this per se; I just always thought it was weird. 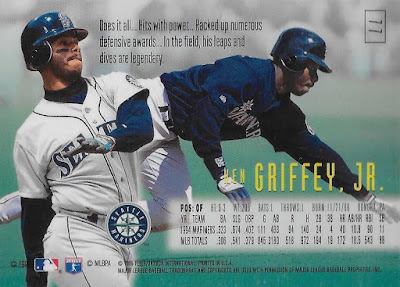 Skybox blurbs are some of my favorite baseball card-related anythings ever. Granted the blurbs aren’t quite as over-the-top as they would eventually become (1999 was the year they really went off the rails), nor are they written in second person yet; but there are hints here of what was to come. You can almost see the blurb writer behind these cards just begging to be let off his creative leash. Only a few years later that same blurb writer would be bustin’ out apostrophes and throwin’ around hip-hop jargon so fly, his mama gon’ think he done lost his damn mind. Squeeeee I can’t wait!!!

I hope you like green, because the next cards are both green hits, and everybody knows that the green hits are the tastiest hits of all (well, the cool people know…). 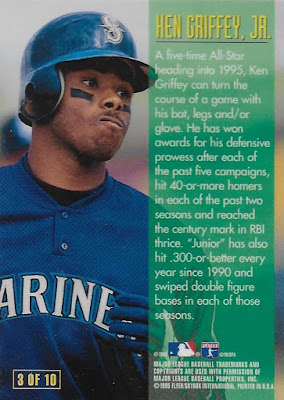 While totally generic in theme, the cards don’t look generic. The insert title/font is perfect as is the copious team-appropriate tinting. We also got a nice, full-color fielding shot superimposed over an oversized, indignant looking Junior wearing an unmistakable does-not-agree-at-all-with-that-called-strike-three expression. Something about the placement of that Seattle Mariner star in the bottom left corner is perfect, and I don’t think I’ve ever seen a more appropriate nameplate on an insert. This card is a beauty and yet somehow also a bargain at less than two bucks on COMC as of this writing.


These were the toughest pulls in the set at 1:37. The big holofoil N is a major design component here, but it seems the star of the show is meant to be the swirling glitter storm in the background. Unfortunately Skybox thinks Seattle’s team colors are kelly green and black. The result is a lot of darkness that hides the otherwise cool, trippy effect you can see on most of the other cards in this insert. Mo Vaughn got the best one if you ask me. 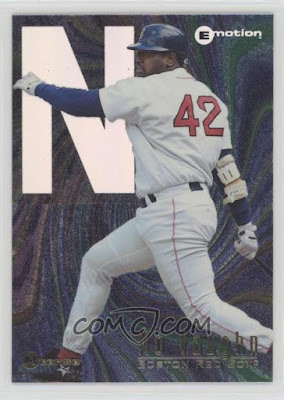 Those Boston colors make this thing pop, am I right? I believe this qualifies as "crunchy." 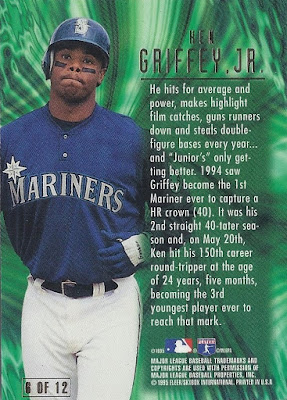 The background on the back hints at what we are missing on the front, and it’s pretty damn cool. They sure put “Junior” in quotation marks a lot. It’s ’95, guys. We all know his nickname by now.

That’s actually it for the Griffeys of 1995 Skybox Emotion. You can have the whole set for less than ten bucks total nowadays which is both a blessing and a curse. The cards really do look and feel richer than that.

There’s one more insert I want to show you just because I love 1995 Emotion that much: 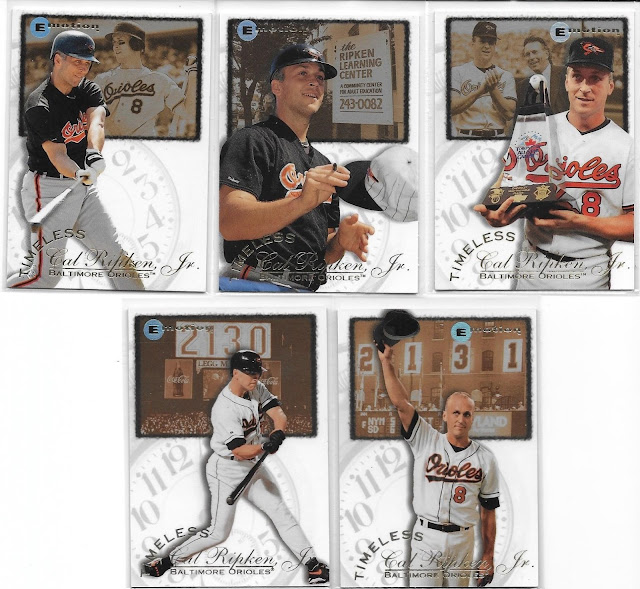 Everybody was giving it up for Cal around this time, and these were just common enough of a pull that building the set wasn’t such a crazy feat. I seem to remember them going for roughly ten buck a pop, so pulling one from a pack was extra sweet (not that I was selling). Still love the design on these.