How Much is Your Griffey Card Worth? A Complete Guide 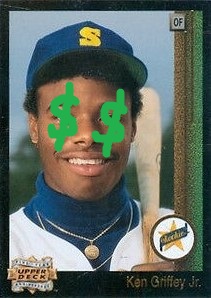 This post is not for everybody, but I've been meaning to put it together for some time. Today was the day.

I get two or three emails a week about card values. Most are quick and easy, but occasionally people argue with me like I’m trying to talk them out of cashing in a winning lottery ticket. Being that as a rule I don't buy cards from anyone through unsolicited emails, this is literally never the case.

If you have an inkling your card is worth hundreds or even thousands, PUMP. THE. BRAKES. The odds are very much against this. Here are four places you can look that should give you reasonably accurate prices for your card:

Let’s go a little more in-depth with each of these:

Like it or not, eBay is the most valuable tool in your toolbox. It shows true market prices in real time which few other sites can do, but it can be misleading.

The problem is that eBay would let you list a paper clip for ten thousand dollars. Your paper clip would almost certainly not sell for that, but anyone with a box of paper clips who sees your auction might think they’re sitting on a gold mine. Look what I just did:

I did this on my phone while sitting on the couch in my underwear. It took 45 seconds. That’s how easy it is.

Do not go by listed prices. Go by SOLD PRICES.

Viewing sold and completed items is easy. On the mobile app it is under the “Filter” tab at the top right of the screen. On a computer browser it is in your filters toolbar to the left of the search results.

This will show you actual, realized prices for each card.

Here’s a real-world example of some misleading listings for a card I get emailed about ALL THE TIME: 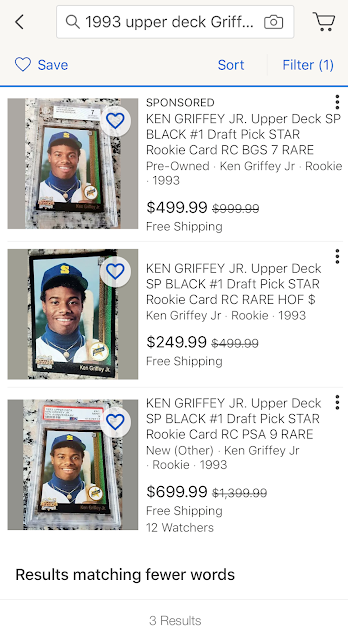 This card is not worth $700, $500, or even $250 (though the PSA 9 may be an exception - high PSA grades are like that). At the time of this writing this is a $20 card at best. Again, listed prices are not values. Here are the completed/sold listings for that same card: 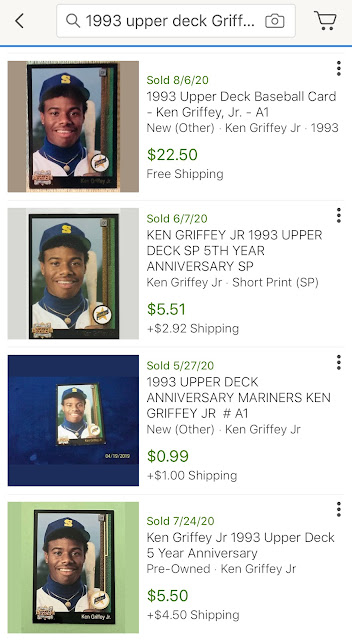 See? Big difference. How that one guy got $22 for his I'll never know.

LOL "Cincy Area Code." I assure you those two watchers are there strictly out of morbid curiosity.

This card is as common as they come, but look at that price. Somebody is going to see this and think that is an acceptable value. Well let’s look at what it’s actually selling for: 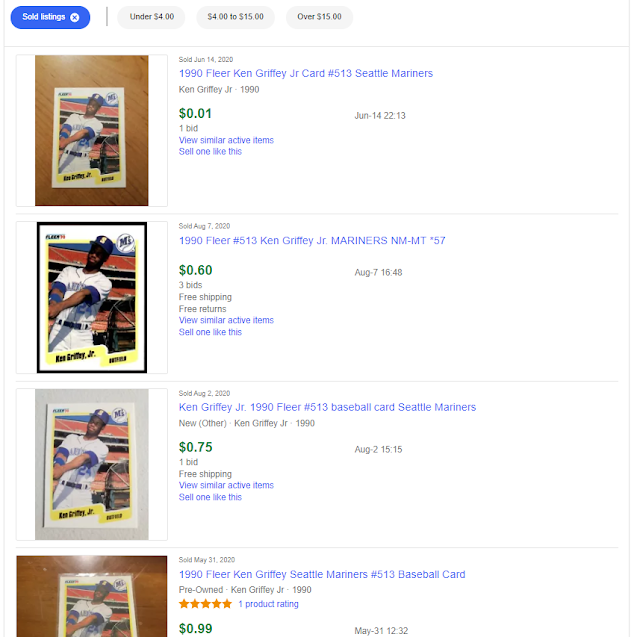 Oof. Not even close. I bet the penny guy is one of those two watchers.

One exception to this rule is graded cards which could potentially go for a lot more. If your card is literally flawless (which it probably isn’t), you can submit it for grading with PSA or BGS for a fee. If it receives the coveted PSA 10 or BGS 9.5 or 10, the value could almost certainly be a lot higher. Don’t count on this, and don’t list your card as a high grade unless it is actually graded, a process that costs real money and takes several weeks.

Check Out My Cards or COMC.com has been around for years and features a huge inventory of common and not-so-common cards with pricing that sellers can update in real time. I buy and sell on COMC pretty much every day. It’s a great resource, and your card is probably on there right now.

Here’s the current COMC listing for that same Griffey card that seems to confuse so many: 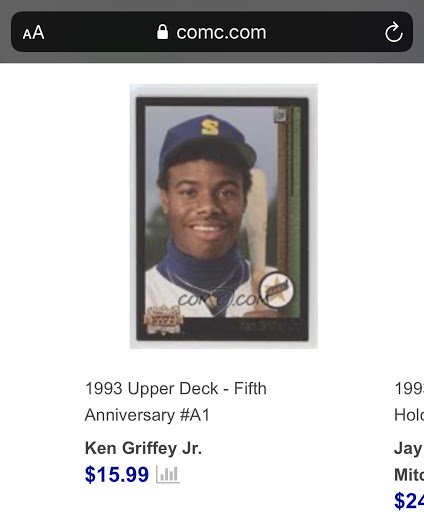 Not unreasonable. You can also make offers to the sellers for lower if you think they’ll go for it. The vast majority of cards I am asked about can be found with a quick search on COMC. Again, the prices are set by the seller, so they aren’t always totally accurate:

Baseballcardpedia.com is a compendium of card knowledge for just about every baseball set ever produced. This is a good place to check and see if you have a rare variation or parallel. It gives pack odds and details on how to spot variations. Simply look up the set your card is from. 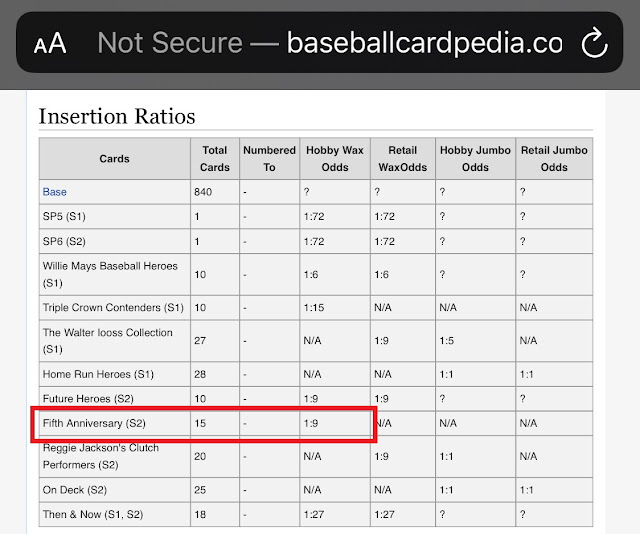 In this case the card is clearly by Upper Deck with a production date (on the back) of 1993, so here is the listing for 1993 Upper Deck. The set is obviously Fifth Anniversary because that's what it says on the card. This grid of insertion ratios puts this one at 1:9 packs which is not scarce by any stretch. Let's look closer by scrolling down to the detail for that insert: 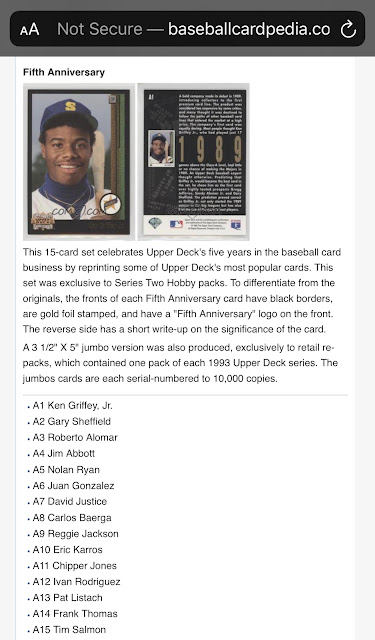 Hey, there are jumbos, too. I did not know that (I did, though).

If you still aren’t satisfied with the myriad valuations of your card you’ve already seen, go to the experts. Beckett has been the retail standard for decades, and they offer both print and online versions of their price guide. Here is that card in the most recent print issue: 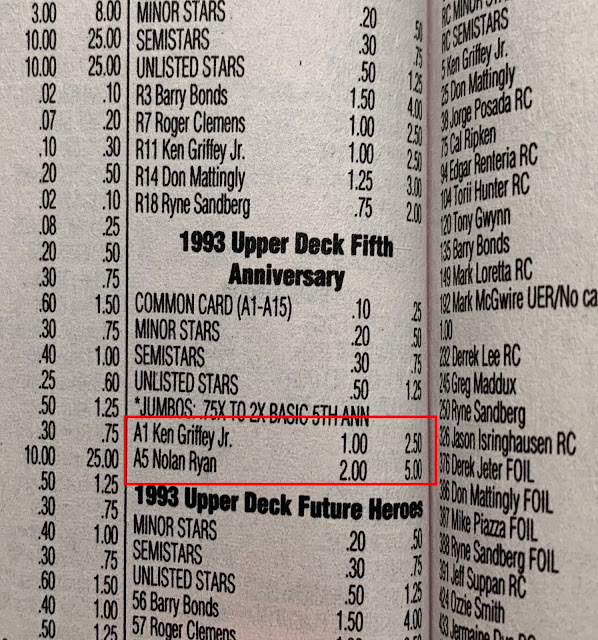 There you go. eBay and COMC are actually being a little generous, aren’t they? This happens a lot with Griffeys in Beckett.

What if I can't find a value for my card in any of these?

Some cards values are more difficult to ascertain even with all these great resources at your fingertips. Things like 1/1’s, low-numbered issues, and errors are just a few examples of what may give you trouble. I’ll be honest: these are more difficult. Go ahead and send me an image of your warlock Griffey card, because I want to see it.

You don't want to hear this, but the answer I will probably end up giving you is the right one: cards like these are worth what the market will pay. If you want to know the value, start checking eBay listings for comparable cards. If you really want to see the market in action, start that auction at one cent and watch the fun.

Generally speaking errors sell much better when authenticated by a grading outfit like PSA or BGS, but concrete values can be elusive.

1/1's and super low-numbered card values are subjective to the point that Beckett doesn’t even list them. Recent issues can go for plenty, but there are a lot of in’s and out’s. Big fancy patches help as do on-card autos. Recent sticker autos and simple color parallels are certainly neat but tend to command less. ‘90’s inserts and parallels can easily go for well into the thousands.

Do a little research before you decide on a price you can live with. And feel free to make inquiries in the collecting community via social media. Most of the people there are good folks, and many of them will make you solid offers thereby avoiding eBay fees altogether.

But the odds are the card you want to know about is not one of these. Based on what I get asked about 3-4 times a week, it’s probably on COMC right now for less than five bucks. Don’t let that dishearten you, though. Some of the greatest collections started with only one card. Mine did - it was 1989 Donruss #33.

In closing, I’d like to add that I hate the whole dollars-and-cents side of the Griffey game, especially now that it's getting to be pretty high stakes. Having both made and lost money on cards I can tell you that as soon as dollars are involved, that’s when emotions start running high, feelings start getting hurt, and people can get angry. Try not to lean too much into this aspect of it and just enjoy the hobby, man. It's supposed to be fun.

And give your not-extraordinarily-valuable cards to a kid or something for goodness sake.