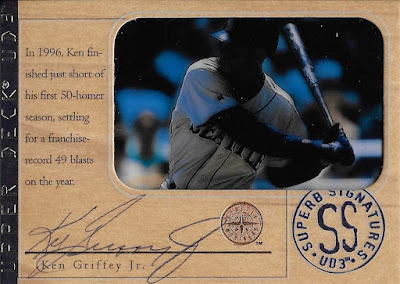 Ladies and Gentlemen, I give you Upper Deck at the top of their game. Take it in….

This was 1997, people – the crest of the wave. Every great brand of the ‘90’s was still active – not just active, prolific – so the competition was still fierce, and as a result the cardboardologists at UD were giving us their all. It’s also the year of Game Jersey and that one wacky die-cut SPx set everyone thinks of when they think about SPx. Oh, and Junior hit 56 home runs and got the MVP. Just a banner year in general.

Talking about Upper Deck cards in 1997 is a bit like talking about that band The Offspring in 1997. Both began in 1989, hit their stride in 1994 (when Smash came out), and both were household names by 1997 (Ixnay on the Hombre-era). And while they’ve both since fallen by the wayside in their respective fields, in ‘97, man, they were mythic.

It should also be noted that both Upper Deck and The Offspring are still around, and both still have their fans, but it’s doubtful either will recapture their former glory. Oh, and The Offspring have a new album Let the Bad Times Roll that came out last April. I haven't heard it, but I'm going to go ahead and assume it sounds exactly like you might expect. Also their lead guitarist is a former elementary school janitor named Noodles, and still rockin’ at 58. Good on you, bro. I mean, sir.

The UD3 – which BBCP insists is pronounced “Upper Deck Cubed” – base set is only 60 cards broken up into three subsets: Homerun Heroes for the power guys, Future Impact for the young stars/rookies, and ProMotion for everybody else. Each of these subsets was characterized by some cool new high-tech printing method, and I happen to have tons of all of them because I bought several packs back in the ‘90’s, and these have made the cut in every culling of non-Griffeys I’ve done. That says a lot. 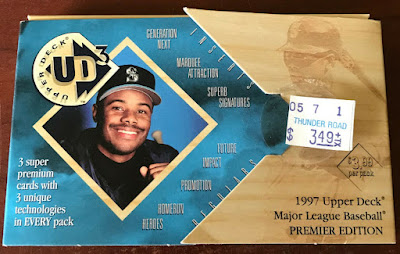 Speaking of the packs, they were little boxes! It wasn’t too much of a shock at the time as we had already seen boxes-as-packs from Flair, but this one is highly Griffey-centric and super attractive. I even managed to hold on to one (not the one above), something I practically never did until only recently. 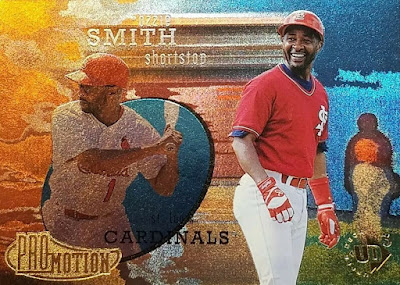 Back to base-ics. ProMotion cards were printed in “Light F/X” technology which is a fancy way of saying etched foil. Upper Deck used this technology on numerous inserts as well as one of my favorite box toppers of all time. 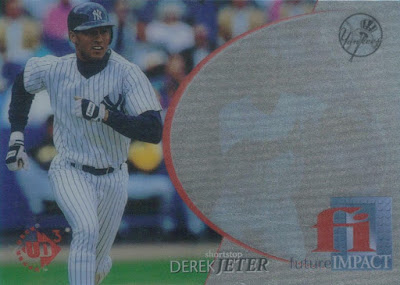 The Future Impact cards were printed in “Cel Chrome” technology which you could also find on the Predictor exchange cards this year. 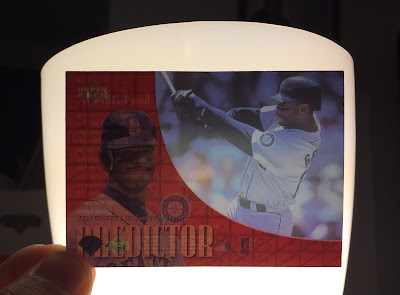 Junior, being a Home Run Hero, was among the chosen for this “Electric Wood” technology. This remains the only printing tech from UD3 I don’t recall ever seeing elsewhere (unless I’m forgetting one – anyone?).

The card itself is impeccable. Where every other player in this subset got a simple action shot for their card front, this is one of those times when Upper Deck drew from their deep well of totally amazing studio shots for Griffey’s base card. This same photo has been recycled for other Upper Deck cards, but I can’t imagine anyone complaining. I mean really, this image proves that someone can strut while standing still. Note the one leg up so you can peep his sweet freshwaters.

Sometimes I get deluded and try on a hipster hat – you know the ones. Pork pies, fedoras, berets – I’ve tried them all, and boy do I look stupid. This photo makes me realize that I will never look cool. In anything. Ever. Not just hats, but shoes, clothes, skin. All the coolness in the world is spoken for, and here it is. In this photo. It’s game over for the rest of us. 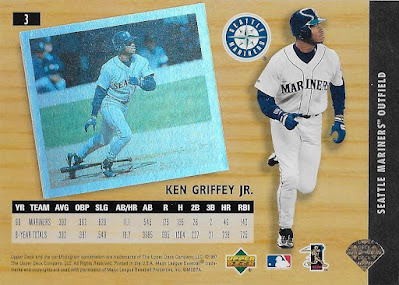 Upper Deck took those three printing technologies from the base set and created three inserts, each of them incorporating one of the three technologies in some way. The rookie insert Generation Next, for example, uses the etched foil of Light F/X: 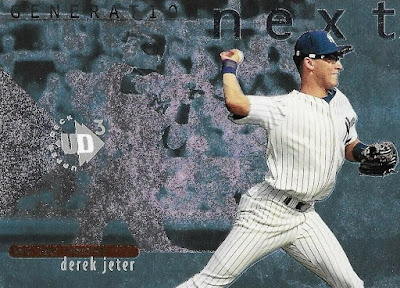 They went monochromatic for the insert which allows the etching to do all the talking here, and the level of detail they were able to accomplish as a result is really impressive. But there’s no Griffey. So….nuts.

The 1:144 Marquee Attraction insert brings back the Cel Chrome technology from the Future Impact base cards. I can appreciate the novelty here, but I have never seen a Cel Chrome card that truly knocked my socks off. They always come across a bit dark and the colors washed out. 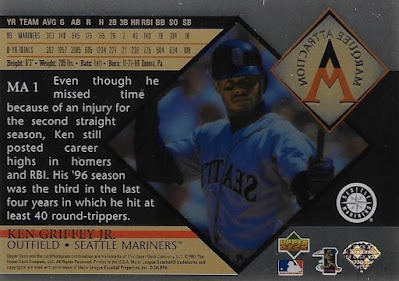 In the context of a binder page the back looks light years better. A little illumination makes this one talk. 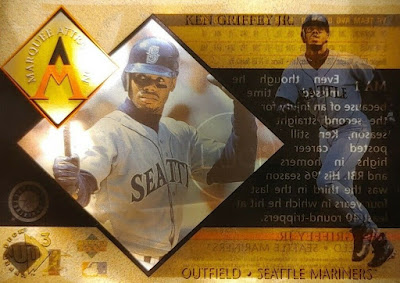 Overall I still like the back better. I can count on one hand the cards that show our guy batting righty. It’s just the nature of the translucent bit here that causes it, but it’s fun to see. Nice enough blurb, too.

So the whole reason I am writing this post is that this card (which has always been undervalued, by the way) has been showing up a lot in the Griffey groups as of late, and frankly I could not be happier to see it get the recognition that it deserves as a true monster of Griffeydom.

I’ve told this exact same story a dozen times on this blog, so I’m just going to go ahead and make a template to cut-and-paste for future posts that feature such a card:

To fill in those blanks, this particular one cost me $120 back in 2017, and now it sells well into four-figure territory.

I’m not trying to gloat when I tell stories like this (well, maybe a little?) – I am trying to show just how much the market for these cards has grown exploded in past few years. It’s been a ride, for sure, but also it has forced many of us who have been collecting these cards for years – and who are pretty attached to them – to consider the opportunity cost of keeping them (and defend that decision to our wives). I’m certain a lot of the readers of this blog can relate…

I don’t like it when these posts become all about the value of the card, but that has become such a big factor these days that it’s hard not to bring it up. So enough of that - let’s talk about this fantastic freakin' card for a minute.

These were seeded at 1:1500 packs or one in every 62.5 boxes. There are only four cards in the checklist: Griffey and…oh, I don’t know, three other guys? Doesn’t matter. That puts a guaranteed Griffey pull at 1:6000 or 1:250 boxes by the numbers. There are scarcer Griffeys, but at this level the differences scarcely matter. 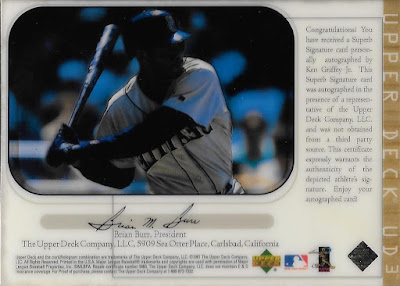 As for the card itself: it’s an on-card signature on wood in ball-point pen. What? That was one of those sentences that gets cooler with every word. There’s been nothing remotely like this insert since, although 2008 Sweet Spot, wherein players signed a piece of baseball leather also in ball-point pen, comes closest. I guess. Not really.

The wood front is embossed with tasteful gold and bronze foil accents with a large window to let the light shine through the translucent plastic back, giving the impression of a film cell. Yet again we get an incidental look at our southpaw superstar batting righty.

I was talking before about how Upper Deck repeated the three printing technologies in the three inserts, and this is the one that is most comparable to Electric Wood, the subset that featured Griffey’s base card. The similarity in design is obvious: the layout, the set name along the left edge, the inset action photo, the nameplate and brand logo along the bottom. Of course this thing is NOT Electric Wood – it’s the regular kind of wood. Like a super-improved version of the base.

We don’t have a way of determining the print run on these without firm production figures, and I’m pretty pee-shy about trying to figure it out using known figures from a comparable set; but I can say beyond the shadow of a doubt that there is least 1 (‘cuz that’s how many I have) and possibly hundreds, but probably not thousands. If I had to make a guess, I’d say between 200 and 400. Lord knows.

There would be one more year of this set which you can read about here (fair warning: it is significantly more complicated), but the late-‘90’s wave of cardboard awesome would continue for a while. Of course it wasn’t long after this that the brands we knew and loved, even some that had been around for years by this point, would start to disappear. As the years wore on those sets that remained would begin to lose some of the extravagance that characterized this era. Even now, over 20 years later, I still find myself having to look back

I mean really, what is the last etched foil card you can remember being released? It used to be everywhere!

And to my fellow ‘90’s kids: regardless of how you feel about The Offspring, if you can’t recite that one “Drivers are rude…” speaking part from “Bad Habit” on command, shame on you.

Play it loud, but not at work.