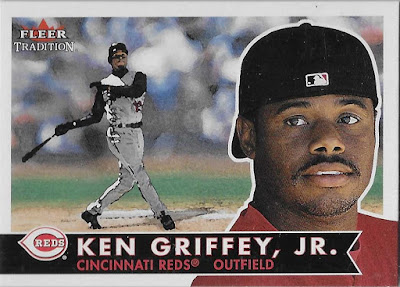 When the vintage nouveau explosion arrived in the early 2000’s, all brands that weren’t Topps suddenly had a decision to make: openly steal Topps’ vintage designs or create new designs that only borrow from Topps. All the major companies did one or the other at some point in this short span.

So it’s no surprise that the base cards of 2001 Fleer Tradition sport a design reminiscent of the 1955, ’56, and ’60 Topps sets. Like its predecessors in design, each card front features a portrait on one side and an impressionist painting of an action shot on the other. The big, bold name plate along the bottom and a small cartoon on the back also look familiar.

I don’t blame Fleer for borrowing – it could be argued that they wanted this to have the look of a “vintage baseball card,” not a “Topps card.” The fact that the vast, vast majority of vintage cards were made by Topps couldn’t be helped. Like if surf music made a big comeback and suddenly the early-60’s Beach Boys albums started flying off the shelves – new bands would play surf-style music that would no doubt sound a lot like The Beach Boys because they were the standard-setters (no disrespect to Jan & Dean and the other surf bands of the 60’s – BTdubs, I would be 100% behind a surf music revival happening).

If anything I respect the fact that they created an original design in the vein of the vintage Topps designs, but not an overt rip-off. That being said, there are still several missteps in 2001 Tradition that can’t be ignored. Gird your loins for a little classic blogger bitching and moaning. 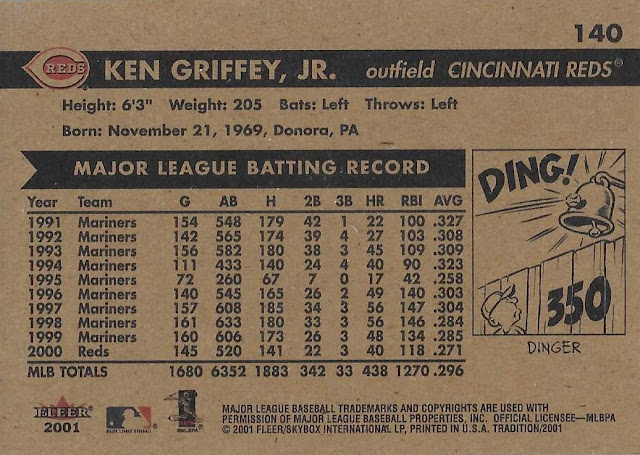 A few minuses and one big plus with this one. First, the big, black nameplate is uggz. Many of these vintage sets were colorful and fun, but this one comes across a little dark. Second, Griffey looks like he’s watching TV on this card. This guy has one of the most expressive faces in baseball, but they picked the most deadpan portrait they could find. At least we get to see the signature backwards cap, and for the first time it is a Reds cap. That fact alone is the plus that saves the card. I also like the painting, and the back is pretty cool, too. 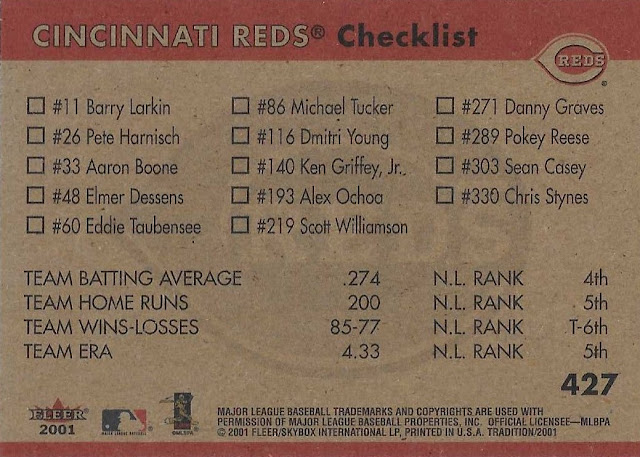 Fleer got creative with the checklists, and nothing says vintage like floating disembodied heads. I really do like these cards. They’re fun and kind of playful. They were also fun and playful when Topps did them in ’63: 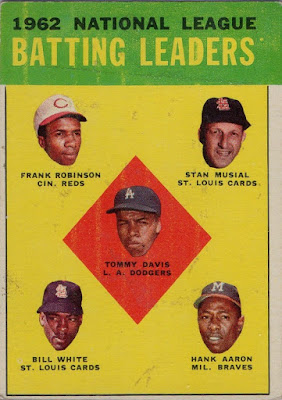 I’m not mad, though. Nobody owns the copyright on the human head.

It appears that the Reds pitcher that led the team in wins and ERA in 2000 did not have a base card in this set or even a photograph of his disembodied head on file with Fleer. Steve Parris retired in 2003 after nine seasons with four teams and a 44-49 record, 4.75 ERA, and just shy of 500 strikeouts. He had gone 12-17 for Cincy in 2000. Steve even appears on a card with Junior in the 2001 Victory set, but remains (noticeably?) missing from 2001 Tradition. 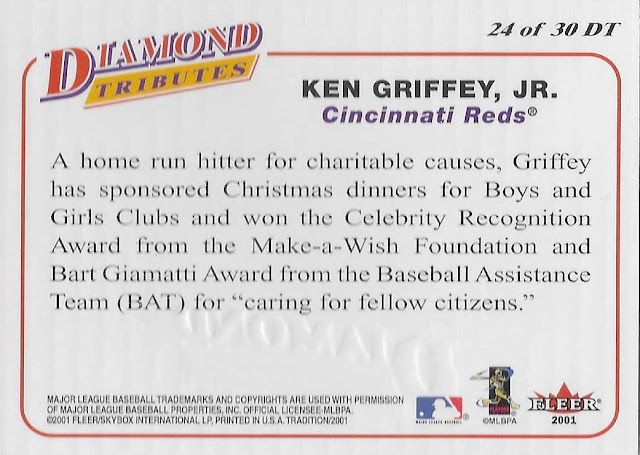 Pinstripes!!! Photography-wise this card has the same problem as the base card: a deadpan portrait that also happens to be a sweet backwards cap shot. Then again, it’s also nice to have an insert point out a player’s off-the-field heroism as this one does for every player in the checklist. A fun design whose fonts, pinstripes, and simple design all scream classic baseball. 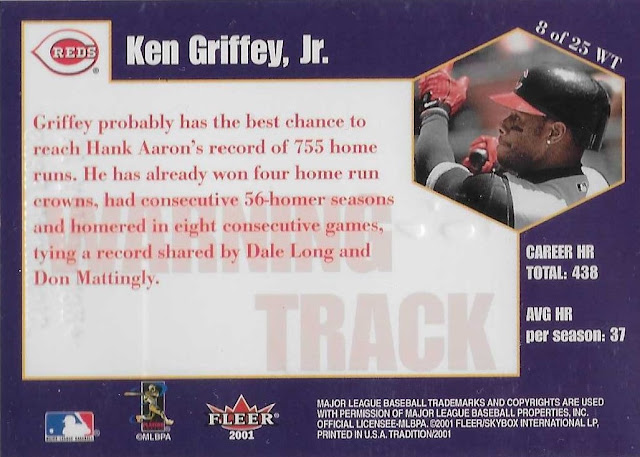 Everywhere that Diamond Tributes insert excels, this one falters. I suspect they were trying to stick with simplicity in the design, and while the concept is good the execution is a little lackluster. It’s plain and the colors clash something horrible, particularly in the area of the grayed-out crowd above the wall. This insert was a rare pull at 1:72 packs, and it included names like Josh Gibson and Larry Doby which I love, but I just never found these cards very desirable. It doesn’t seem like they put a lot of time into them - even the back feels thrown-together. Of course, that didn’t stop me from picking up a copy of the Gibson and the Doby for my collection.


I read a quote once that a critic is someone who puts on a suit of armor and attacks an ice cream sundae. Since then I try not to be overly critical when I do write-ups of cards (especially with Fleer inserts which are usually pretty neat). I really don't want to be that guy, but bear with me on this next one. 'Cuz I fucking hate it. 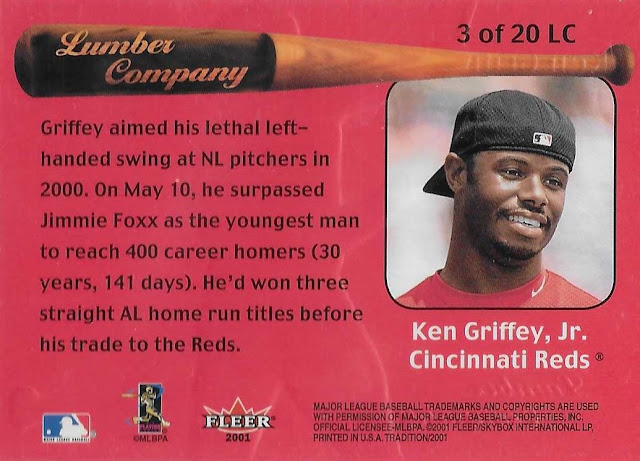 Lumber Company has been a standard insert of Fleer sets going back to 1996, and it was almost always cool….until now. This year they completely blew it. While most years of Lumber Company use wood grain and texture right in the design of the card, the 2001 version is just a big, team-colored rectangle with a massive team logo and a bat sporting the insert name. It really sucks. This insert would bounce back design-wise (the forthcoming 2006 design is a favorite), but 2001 is just the worst. Boo this card. 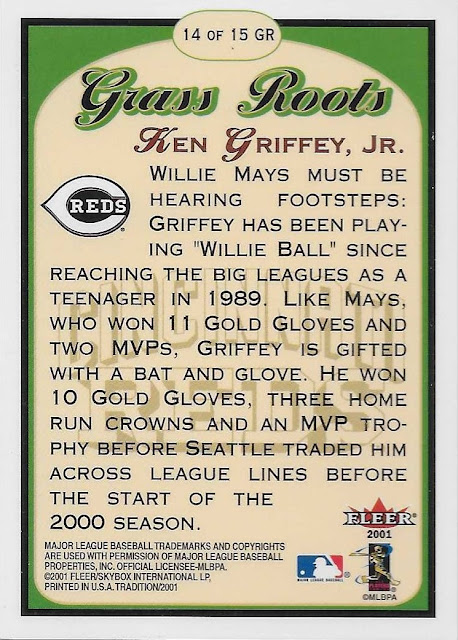 This card makes me laugh. It’s an attractive design and talks about Junior’s similarity with Willie Mays, but that image of Junior running through gigantic blades of grass is such a literal treatment of the insert name that it boggles the mind. The fonts and design are balanced and classy, but really this card looks like a scene from Honey, I Shrunk the Kids. Or should I say, The Kid?

2001 had a lot of problems, but there were some bright spots, too. There are plenty of decent non-Griffey base cards, the “Stitches in Time” insert is an attractive tribute to the greats of the Negro Leagues, and the inclusion of a few retired legends in regular inserts was still pretty innovative. The way I see it, had they fixed the color on Junior’s base card, not fudged up Lumber Company so bad, and included Griffey in the “Turn Back the Clock” relic insert, I’d have a very different perspective on this troubled set.

I'm sorry I cursed, but you were warned...
Posted by The Junior Junkie at 8:00 AM