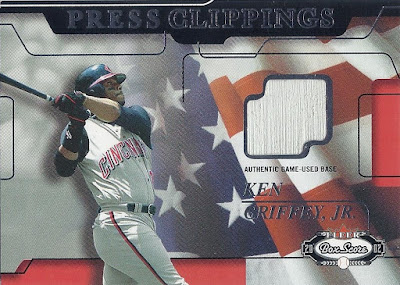 Baseball is hardly ever televised in my hometown. We don’t have an MLB team in New Orleans, and the closest one to us never brought locals any excitement, even in the few-and-far-between good years. All this made me a bit of an anomaly in the mid-to-late 90’s when I followed baseball closest. The only outlets for my MLB fandom were Baseball Tonight, the occasional TBS Braves or WGN Cubs game, and the newspaper box scores which I would read each morning, even before the comics.

So the look of those box scores is very much burned into my memory, and seeing one even now brings up the excitement of seeing a stat line full of numbers next to “Griffey Jr” in tiny black and white print, and scanning the home runs breakdown to see if my favorite player was any closer to that hallowed #61.

Of course these mornings eventually got harder and harder to swallow for Griffey fans like me as McGwire and Sosa pulled away in 1998, leaving Junior with *only* 56. By the time Bonds took every bit of fun out of the home run race in 2001, I was back to reading comics first again, and I’ve never looked back.

So I have a big ole soft spot for this set. On the surface the idea is simple: a set of cards based on the iconic and universal baseball box score. Personally I would have taken the idea and made an insert for another one of Fleer’s myriad sets, but I’m not one of the creative geniuses Fleer had working for them in the early aughts. They stretched it into an entire sub-brand with numerous relics and numbered parallels and everything. 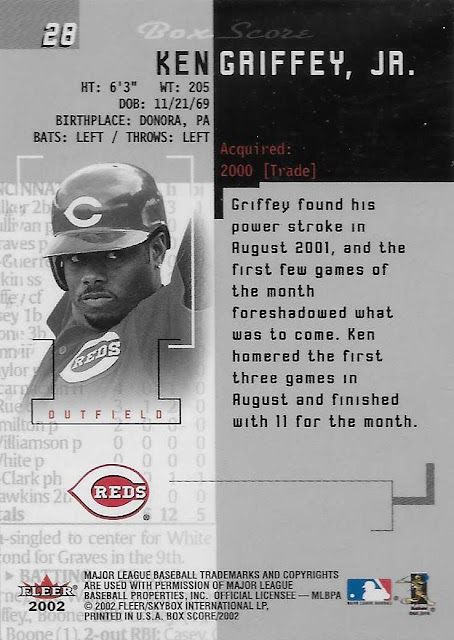 The obvious highlight here is the real box score used right in the design. Thanks to context clues in the box score and a little sleuthing on baseball-almanac.com, I was able to deduce that this from the Reds’ first game of the year on April 1st, 2002, a mere seven days before Griffey would suffer a major knee injury. The Reds would lose that game to the Cubs with Junior putting up one hit and a sac fly.

It makes sense that Fleer would use the box score from Opening Day as the idea for this set probably came during the off-season when brands are brainstorming new ideas, Fleer moreso than most. I’m too lazy to do the research, but I’m willing to bet that all the box scores used in the base set are from that same day, April 1st, 2002.

The design itself uses a lot of gray and white which can come across washed-out and boring, but in this case it makes the color in the logo and player silhouette seem to pop off the card. The design carries over to the back of the card nicely.

I just can’t help wondering how great this would look, you know, super tiny. 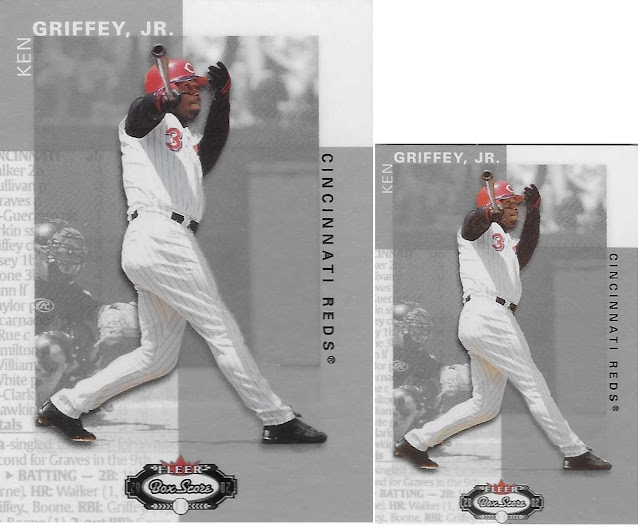 Ah, there we go. This is the Classic Miniature version which looks exactly like its regular base card counterpart only pint-sized and serial-numbered. It’s just your basic parallel - nothing to write home about, really. 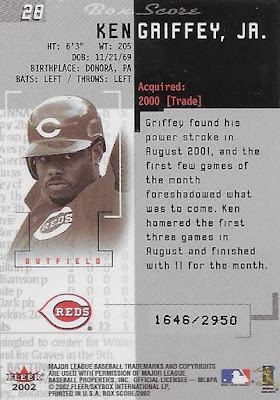 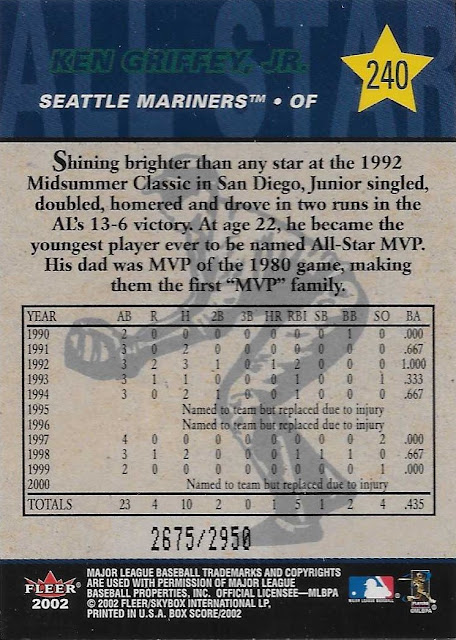 A generous chunk of the base set is broken up into subsets that could each be its own decent insert. My favorite is this All-Star subset. It’s printed on glossy plastic in lieu of paper and features a slight sparkle to that giant star background. This card is brilliant despite looking a bit like a page out of a coloring book. It includes complete All-Star stats on the back and heralds Junior’s ASG MVP status right on the front in addition to his years of ASG nomination. The blurb needs an Oxford comma, but apart from that it is very much above-average. This is also one of those not-often-seen Griffey Mariners cards that came out while he was well into his career in Cincy. There weren’t many of these after 2000.

There is parallel in this set called First Edition that is very much a gray whale in that it is not terribly expensive but I just don’t want to spend the money. There are three cards available as First Editions: the base card, the miniature parallel (yes, a parallel of a parallel), and the All-Star Subset. Each is numbered to just 100 which would mean a lot more if this set came out four or five years earlier. Apart from the serial number and little “First Edition” banner on the front of the card, the only real difference on the base cards is that it uses silver foil instead of gray. Ho-hum. Here’s hoping the other two are more exciting. 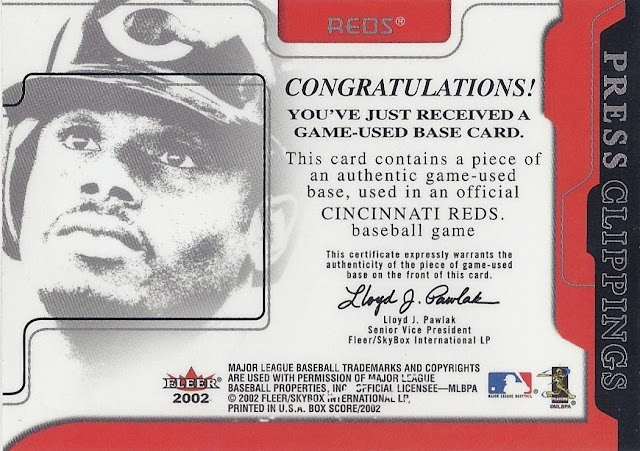 By this time relic cards were very much run-of-the-mill, but Fleer made this one fun with tasteful use of foil and the kind of good old fashioned overcooked patriotism that one could expect in post-9/11 America. I love that close-up portrait on the card back, too. Shine on, you crazy relic.

Here are the Griffeys I still need from 2002 Fleer Box Score:

In terms of PC checklist completion, I am doing a pretty shameful job here. That Press Clippings insert is not rare at all, and the somewhat desirable quadruple relic from this set is pretty affordable. Yet I still don’t have either one. This set is a shining example of how my (and the market’s) attitude towards acquiring Griffey’s cards changes when it comes to sets made after 2000.
Posted by The Junior Junkie at 8:00 AM