I went into 2016 expecting two things to happen: First, I thought that, despite becoming a new Dad, I would still have plenty of time to blog. I mean, the boy’s gotta sleep sometime, right?

I was wrong. I mean, he slept - a lot - but that’s when I slept, too. Hence, I was usually snoozing in what I thought would be my blogging time, and my post count suffered. As some of you may know I’ve all but dropped off the face of the Earth in that respect.

The other expectation was that it would be a very lean year when it comes to new Griffeys. I thought I’d be whittling the Top Acquisitions list back down to ten and that maybe a new autograph or two would top the list, and that would be it.

Again, I was wrong. The collection actually made some pretty respectable gains this year with the help of a couple of Griffey collecting social media groups, Griffey’s return to the spotlight via his Hall of Fame induction (and plenty of attention from Topps as a result), and a sharper focus on completing the 1996 Beckett Tribute checklist. Oh, and I went a little autograph-crazy as you will see.

So, while this year can in no way compete with the monster year the collection had in 2015, it was still pretty remarkable despite the low blogging activity. That sums up 2016 for me: still Griffeying, just not writing about it.

A reminder: last year I began grouping like cards together rather than rank each one individually, and I did it again this year where it made sense. One of my focuses was the parallel-heavy 1996 Beckett Tribute checklist not to mention all the great Griffey-centric inserts that Topps gave us. As a result, this Top 30 list has way more than 30 cards on it. That escalated quickly. 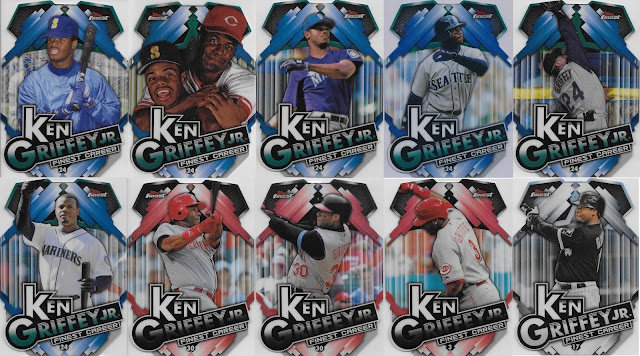 As a Griffey fan I am all about Topps’ Griffey-centric inserts for 2016. At one card per case, the 10-card Finest Careers insert was not an easy pull. I even bought a box of Finest (so unlike me) when they came out in the hopes of pulling one (which I didn’t), but over the months I was able to piece the checklist together as the prices cooled off and people started listing them for reasonable amounts. I really love the fun modern font and die-cut design – it’s a Finest insert through-and-through. Well done. 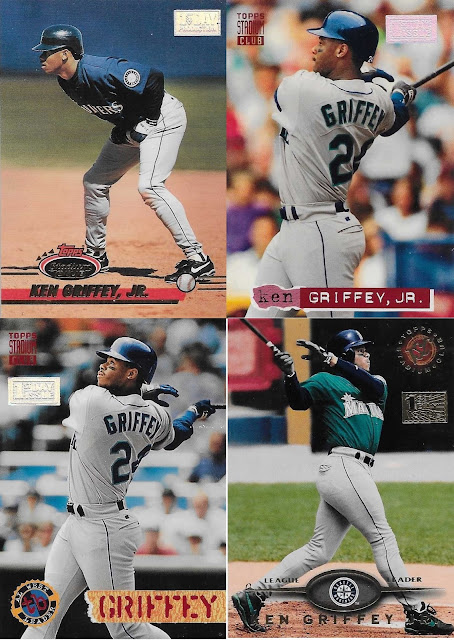 You are going to see a lot of ‘90’s parallels on this list since I’ve been hard at work trying to complete the 1996 Beckett Tribute checklist. I’ll admit it: this is a boring parallel by most standards. It’s also pretty scarce which is how it ended up here. It’s nice to see First Day Issue and Stadium Club in general are both back and great as ever, but I do miss these holofoil stamps. 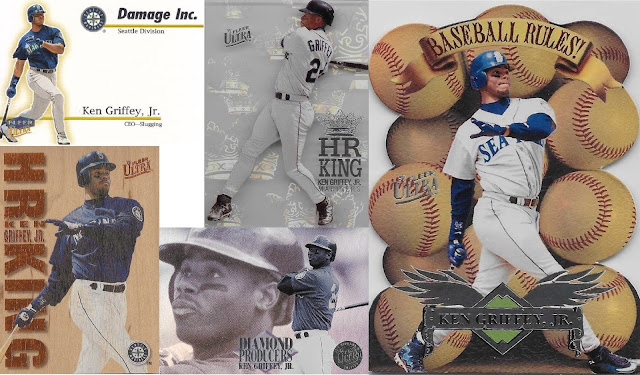 Ultra from this era is quite a hurdle. They got pretty hardcore in the late 90’s with a ton of tough-pull inserts and the significant beefing-up of their Gold Medallion parallel. Combine both of these (which is precisely what Ultra did) and you have tough inserts made tougher by a super-tough insert parallel. So for player collectors in the ‘90’s, things were, well, tough, and they remain so for ‘90’s PCers such as myself. Despite many months of active searching, there are still several I need to finish the Beckett Tribute checklist. 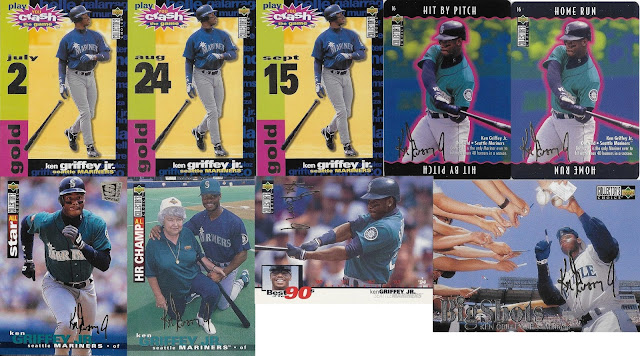 Look at all these gold signatures! My cousin and I busted a ton of packs of this product in our day, and in all that time I pulled only one gold signature (Gregg Jefferies). To us, Gold Signatures were a legendary parallel, and I never thought I would have this many. I like to think that were he still around, even so many years separated from the hobby, he would appreciate this little stack of one of our all-time favorite parallels.

Sorry to get a little sad on you there – to make up for it, here is some ink: 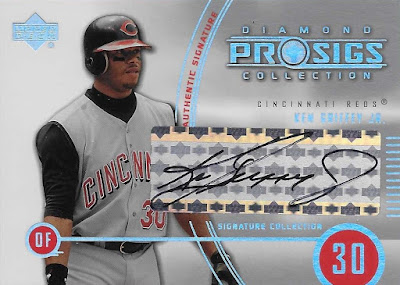 This is the lowest-ranked an autograph has ever been in the 4-year history of this list (not counting one that didn’t even make this list). Nothing against this card – it’s a beauty – but at heart it’s a simple sticker auto on a base card. Just look at the card number. I’m used to autographs having numbers made up of letters, usually with an “A” added. #KGA and #AU1 and such. This is card #204. How do you have an autographed card #204? Anyway, Griffey signed it, so there’s that… 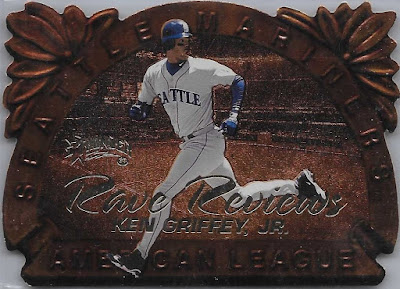 If you want insane ‘90’s-style die-cutting and foil work, look no further than this…thing. It was the 1:288 monster of Circa Thunder, and it really looked the part. I know it’s so 2003 to quote Family Guy, but design-wise it reminds me of Peter Griffin’s negative review of The Godfather: “It insists upon itself.” Still, like The Godfather, everyone seems to love this insert, including me. 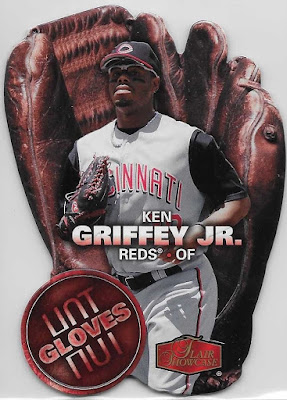 Upper Deck’s version of Fleer’s Hot Gloves insert is unsung but hella-rare and one of the best in the series. There don’t seem to be stated odds anywhere (how do you not state odds in 2006 – you crazy, Upper Deck), but there are known to be only 150 copies of each player. So if you’re a Hot Gloves completionist, which I am, it’s a must-have and among the toughest gets to finish off the timeline. 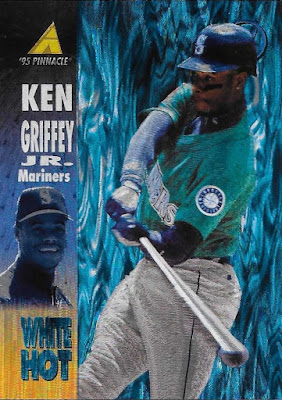 Here is a rare parallel of an insert from way back in 1995. Red Hot was seeded at 1:8 packs with a 25-card checklist (pretty big, obviously). The stated odds of pulling a White Hot version were never stated, but they are most definitely a lot rarer. As the owner of several of the Red Hot cards, including the Griffey, seeing one of these for the first time took me completely by surprise. Like dating a brunette for years then one day she dyes her hair blonde, and in the time it takes for you to get used to it you kind of feel like you’re cheating on her….but it’s still her so it’s OK but also naughty and titillating.

I finally worked “titillating” into a paragraph about baseball cards! This blog has officially gone too far. 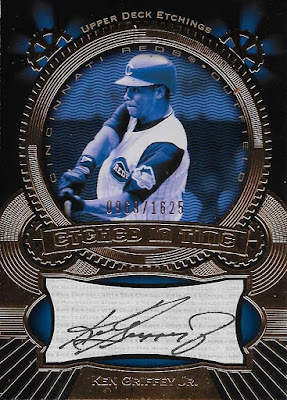 If you are just getting into the Griffey game and you want a cool autograph for not a lot of coin, look no further. There are a whopping 1625 of these floating around, so there is no premium for rarity here. What I’d really like to do is get a box of this stuff as it’s the product into which Upper Deck inserted those amazing A Piece of History 500 Home Run Club cards, the numbered-out-of-25 autographed version of which regularly sells in the several thousands. Pulling one from a box may be the cheapest option for us regular shmoes. 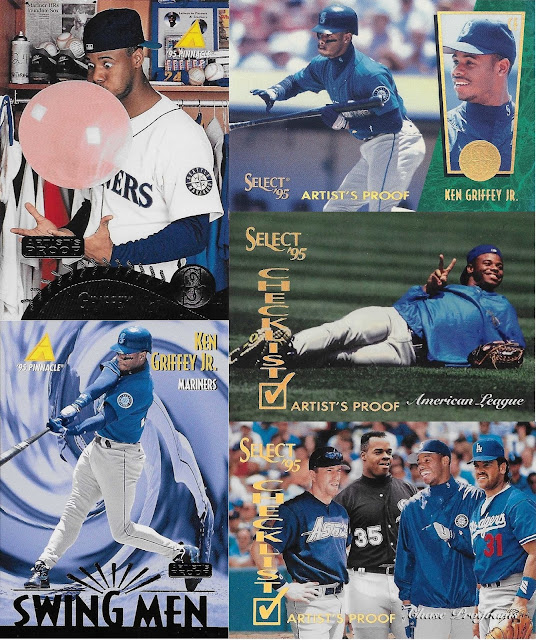 OH MY GOD THESE ARE HARD TO FIND. Seriously. It wouldn’t even be that bad except that Griffey had SO MANY CARDS in both Select and Pinnacle base sets – we’re talking checklists and subsets and EVEN MORE checklists. And some of these checklists feature multiple Hall-of-Famers on one card so you also have to compete with PCers of those guys to get them. Brutal.

There are 475 of each Select Artist’s Proof base card which isn’t very many for this early in the rare parallel game. As for the Pinnacle AP’s, well, I have no idea how many of each there are, but I suspect its even less than those in Select. Anyway, you are looking at SO MUCH MONEY AND TIME in this little group of cards.

Look out for cards 20-11 tomorrow, and thanks for reading!
Posted by The Junior Junkie at 8:32 PM