I more than doubled the number of Griffey autos I have this year from 13 to 28, and I even managed to add a few of the pre-2000 variety which tend to be among the most sought-after. Get used to seeing ink on this list. 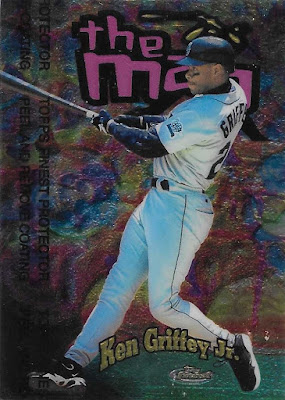 If this were a list of Griffeys that look like pieces of delicious candy, this card would probably be #1. The #/75 refractor version sells for a hefty premium, even for a numbered-to-75 card from 1998, for the simple fact that it looks so darn cool. And delicious. I can’t blame folks for driving the price up – this may be my favorite Finest insert ever, and that in itself is a zesty mouthful. 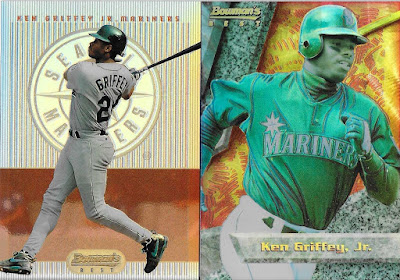 At 1:9 packs these don’t seem like they should be as rare as they actually are. At $5 per 4-card pack, you had to spend about $45 to pull a single refractor. The 1995 numbers aren’t that far off from these. I’m thinking overall production figures had to be pretty low considering how few come up for sale.

The best thing about these cards is that they are some of the earliest refractors you can get, and they are beautiful. I put off pulling the trigger on them for a long time, but I needed them for the 1996 Beckett Tribute checklist, so I just went ahead and did it this year with no regrets. Is it just me or were refractors shinier back then? 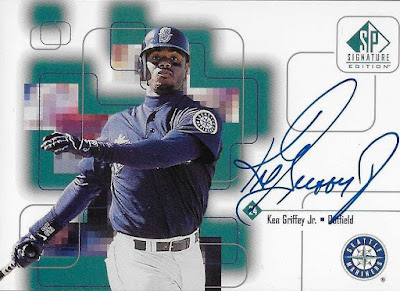 I used to say that a good measure for the quality of a player collection, especially a player from the ’80’s and ‘90’s, can be measured by the oddballs it contains. This is still true to a point, but when it comes to top-tier Griffey collections I’ve learned there a lot of other measures. Things like sub-100 ‘90’s parallels and the scarcest of ‘90’s inserts (seeing a trend here?); but the most popular measure of a great Griffey collection seems to be the quantity of pre-2000 autographs.

Any Griffey collector will tell you pre-2000 autos are where it’s at. There are only 59 (give or take) specimens to be had with the priciest of those being hand-numbered to very small quantities. Many of the cards on the list aren’t even official – they’re aftermarket releases from the likes of QVC and the Highland Mint that just happen to use pre-2000 cards. Still, there are collectors out there whose mission is to obtain every one of them, and there are even a few who have actually done it – I’ve seen the pictures. It’s quite a feat, and expensive on a level never really discussed on this blog. We’re talking a literal fortune.

This is one of those pre-2000 autos, albeit one of the more common ones. There is nothing really spectacular about it apart from the fact that it’s on-card (as most were at this time) and pre-2000, but that’s enough for me. I don’t plan on shelling out thousands trying to get every Griffey auto from that era, but when one comes up for a reasonable price and if I’m feeling saucy, I’ll bite. 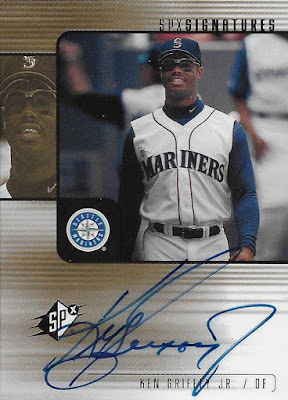 This is as close to a pre-2000 auto as you can get without it actually one. It was probably signed while Junior was still officially with Seattle. It barely edges out the genuine pre-2000 auto for the fact that I think it’s just a tiny bit rarer and I like the design more. 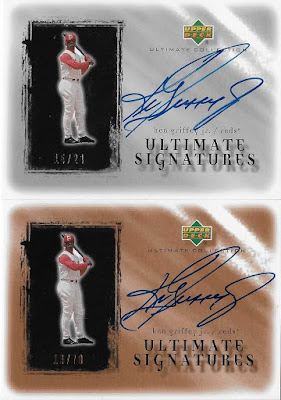 The gold is a bit out of my price range at the moment, but I got these for roughly the price the unsigned relic versions go for (which is still kind of a lot for a baseball card). Still, it’s a popular design, and the cards themselves look great. Plus they’re both on-card. Maybe I’ll go for the rainbow in 2017… 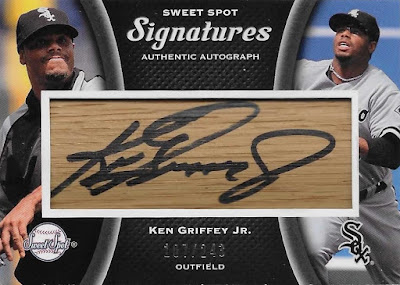 This is my first autographed bat barrel card as well as my first Griffey White Sox auto. While it’s still weird to see Junior in a White Sox uni, I definitely have a fascination with his cards from that era. 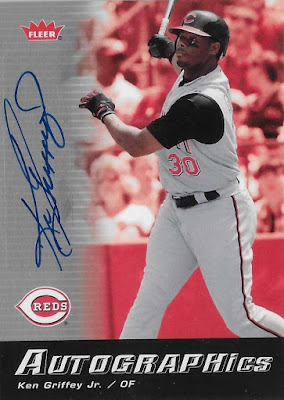 You are looking at the first ever Griffey autograph from Fleer. Upper Deck, who owned exclusivity to Junior’s signature on cards, acquired the troubled brand just the year before after Fleer declared bankruptcy. Upper Deck would go on to release a total of five Griffey autographs under the flagship Fleer brand right up through the final Fleer set in 2007. They also released two Griffey autos under the Fleer Tradition brand this same year including a 1989 Fleer rookie buyback auto that I totally want; but since 2006 Fleer was released in April and 2006 Fleer Tradition was released in August, this one was definitely the first. It’s a little piece of cardboard history only collectors can appreciate. 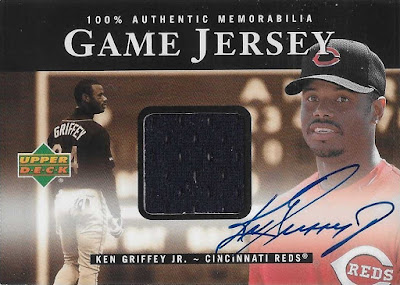 It’s an auto-relic! One of the few I have for Junior, this is one of the first of its kind. It was released under the Game Jersey banner which is how the first jersey relic was released in 1997 and which continued right up until Upper Deck had to stop making baseball cards altogether in 2010. It appears to contain a piece of Mariners jersey, too, which is rare for a Reds card (not as rare as a Mariners card with a Reds relic, obviously, but still rare). There are numbered versions of this that go for much more, but not nearly as much as ones from only the year before when he was still a Mariner. These are a perfect example of the disparity between Mariners-era and Reds-era Griffey autograph prices. It’s a great design, too. 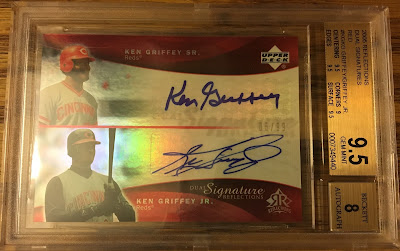 This is the red parallel of a card I already have, but it’s just so cool that it is getting yet another high spot in the Top 30. And being that both Griffeys are in their Cincy reds on the card front, this parallel is the most appropriate one. 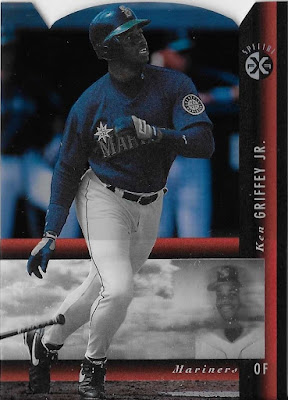 I remember when these were brand-new and, frankly, pretty amazing. The moving hologram featured a changing image of the player’s face as you turn the card. Griffey’s is particularly creepy because at first he is smiling his massive Junior-smile, then as you rotate the card it slowly turns into a stoic stare like your smart-ass older brother might have done that time you made a lame-ass joke. There are thought to be around 700 of these floating around, and they consistently sell in the triple-figures. An iconic ‘90’s insert.

Okay - this is it! This next post is the big one: the Top Ten New Griffeys of 2016! Hope you like awesome stuff.
Posted by The Junior Junkie at 8:00 AM