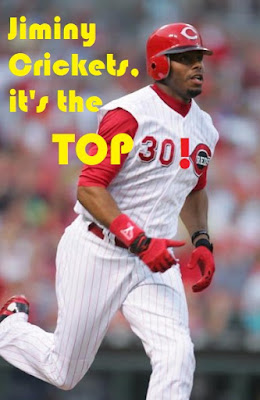 That last post was the first time in five months I’ve gotten to hit the Submit button, and it felt good. I’ll have to try and keep up with posting again. Not making any promises, of course. Have I mentioned that this kid poops like 11 times a day? 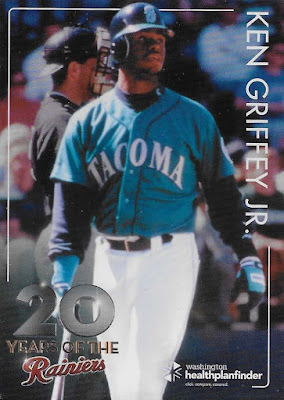 I’ll be honest: I’m not sure whether this is a 2014 or 2015 card. 20 years would technically be 2014 as the team adopted the name “Rainiers” in 1995; but I’ve also seen a lot of business/organizational anniversaries celebrated in a year ending in the same digit as the first year. The team is currently managed by Pat Listach who had an absolute buttload of awesome cards in the ‘90’s. ‘Member him? 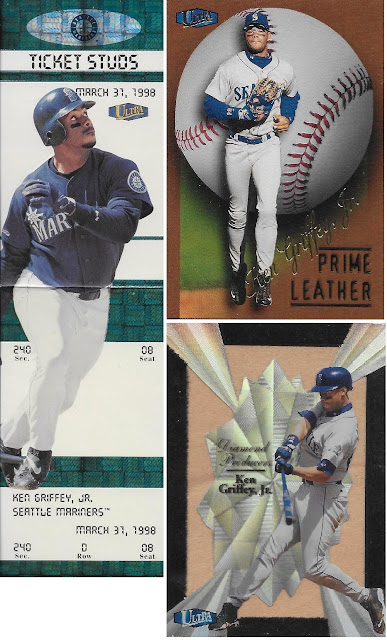 I got all excited while putting together the Gold Medallions of 1996 Ultra, and I expounded on that by setting my collecting crosshairs on the other insane inserts of the savagely 90’s Ultra brand. These bad boys are 1:144, 1:144, and 1:288, respectively, and they are just frickin’ out there, man. God, I miss ‘90’s inserts. There’s still one whale left to get in this set before the rest fall into place… 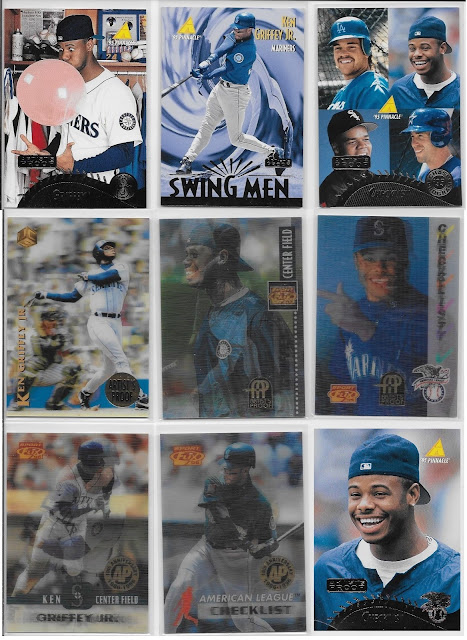 18. Every Pinnacle Brand Artist’s Proofs made before 1997

Pinnacle AP’s are some of the toughest parallels of the 90’s because in addition to being scarce there are just so many different ones, especially for a prolific guy like Junior. This was the year I picked off the rest – the final five I needed to complete my Pinnacle Artist’s Proof game through 1996. Again you can thank the 1996 Beckett Tribute checklist for forcing my foot down on the gas here. Still, it’s nice to be done with them. 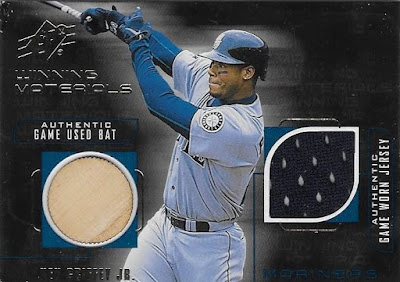 A very tough, super early double-relic. And I may be mistaken here so don’t quote me, but I believe I saw somewhere that these were the first dual-relic baseball cards? Like, ever? Someone correct me if that’s not the case.

So how did I get one? And why is such a card so low on the list? You may not have noticed in the scan, but this thing is in extremely rough condition. I dare say it may be the roughest specimen of this card in existence. Not only are there numerous dings and some seriously soft corners, but someone took it upon themselves to sharpie out the white bits in the upper left corner. What kind of lunatic does that?

Anyway, thanks to that sharpie-happy nutcase I was able to nab this card for way below market value. Sure I’ve spouted a lot of “condition doesn’t matter much to me” rhetoric through the years, but the fact is that were this in better condition it would probably be much higher on this list. Then again I wouldn’t own it then because it would have sold for WAY more than it did. Some mixed feelings here, but you can’t fault the card. Great design, too. 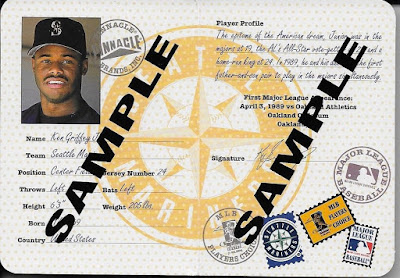 You are looking at one of the most difficult “sample” cards of the ‘90’s, and that is saying something. I’ve only ever seen one in my collecting career, and it’s the one you’re looking at here. By the way, this is also a great example of the weird, requires-an-explanation kind of stuff you’re going to see all over this year’s list. Like I said before – it was a weird year. 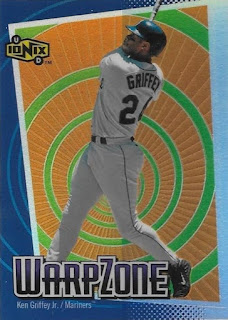 I spent significantly less money on Griffeys this year, so it was easy to justify picking off a few of the higher-priced, more desirable gray whales. This eye-melter from UD Ionix is a prime example of such a card, and there are a few more to come.

Not everybody recognizes the scarcity here, but trust me – this thing is a tough get. It’s hard to label it an oddball as Colla was actually pretty prolific in the early 90’s, and bookmark cards like these hardly ever command top dollar; but this one consistently approaches three figures or better even in not-so-great condition (I suspect a few kids may have actually used them for their intended purpose, driving the prices up, the little savages). 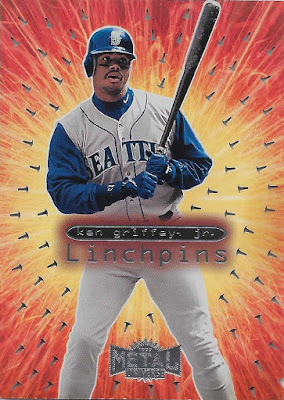 Another highly-desirable, high-dollar gray whale of 90’s-ness. As a lover of the Metal Universe brand, I’ve actively chased this thing for years; but it’s always been priced just a little higher than I’ve wanted to pay. This was the year I finally made it happen. The die-cutting here is incredible. How did more of these cards not have hanging chads (you younger folks might have to Google that last thing)?

I became addicted to sealed packs with visible Griffeys in them a couple of years ago, and this year I was able to add a pair of really cool ones to the collection, both of them rookies. The 1989 Fleer cello pack is great because the Griffey is right on top, but I’m more enamored with the ’89 Bowman magazine pack because not only do we get a bonus visible Mickey Mantle Bowman reprint, but the Ken Griffey, Sr. television card (with Junior’s rookie cameo) is also visible on the back. That’s BOTH Griffey rookies in the set visible in the SAME pack. What are the odds? 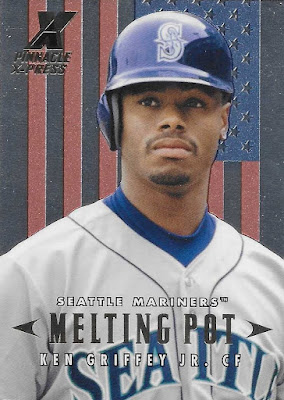 There are only 500 of these floating around which is pretty darn scarce for a card from an unsuccessful set from way back in 1997. The wild/frustrating thing about this particular one is that Pinnacle made about 10,000 samples of it and sent them to EVERYONE IN THE WORLD APPARENTLY. Since I needed one I did that thing of when you tell eBay to e-mail you when an auction is listed that uses certain key words, namely “1997 Pinnacle X-Press Melting Pot Griffey,” and since everyone in the world had the sample and didn’t want it (it’s not a very attractive card), I would get e-mails that new Griffey Melting Pot cards were listed what felt like EVERY SINGLE DAY. Then I would have to click on them and check to see whether the picture had “SAMPLE” written across the front (thank God it’s on the front). I probably did this 300-400 times over the last couple of years until the day a real one was finally listed, and I put it to bed with a massive overbid just so I wouldn’t have to deal with it anymore. I’m not even all that crazy about this insert, but turning off that eBay saved search was one of the greatest moments of my collecting career.

Welcome to the list, Melting Pot. You kind of suck.

Alright – one post left in the Top 30. No purple Crusades or Mantle autos in the Top 10 this year, but there will be ink. And cookies! Thanks for reading.

Seriously – COOKIES.
Posted by The Junior Junkie at 7:00 AM