Griffey on a Card With Diamonds: 1996 Pinnacle Zenith 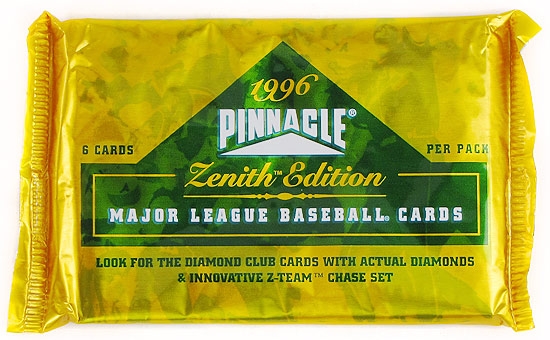 While for the most part Zenith didn’t change all that much from the previous year, Pinnacle did turn up the heat a bit on their sophomoric super-premium set with the addition of two new parallels, one of which gave any guy who’d ever bought an engagement ring the sweats. On top of that the Griffey checklist went from three cards to nine, including a 1:350 pack white whale of the highest order. That’s quite a leap from the relatively easy-breezy ’95 checklist.


The base cards are still largely black and gold but with a toned-down nameplate and bat wave graphic instead of the gold brick walls of the previous design. I prefer this year’s gold foil nameplate but can’t help feeling like the overall effect is a little dark, even in person. Also black cards are great for exposing how dusty your scanner has gotten. 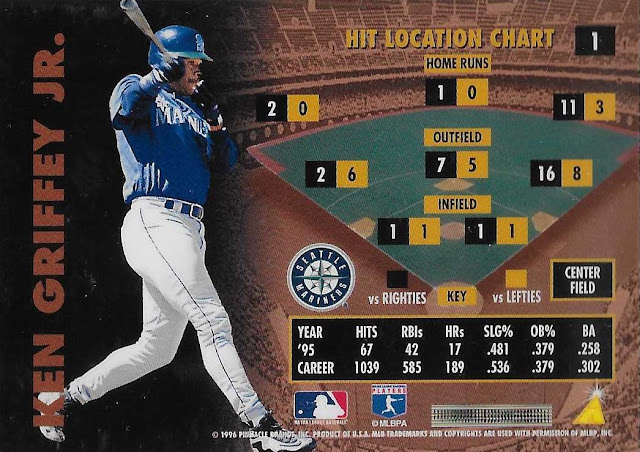 The backs maintain the hit location chart of the previous set but replace the kaiju-Griffey with a full-size action shot. That photo looks like Junior is both swinging away and blowing a kiss at the pitcher at the same time. Now that’s multi-tool talent.


The Honor Roll subset is attractive enough especially compared with that hella-dark base card. My only issue with it is on the back: 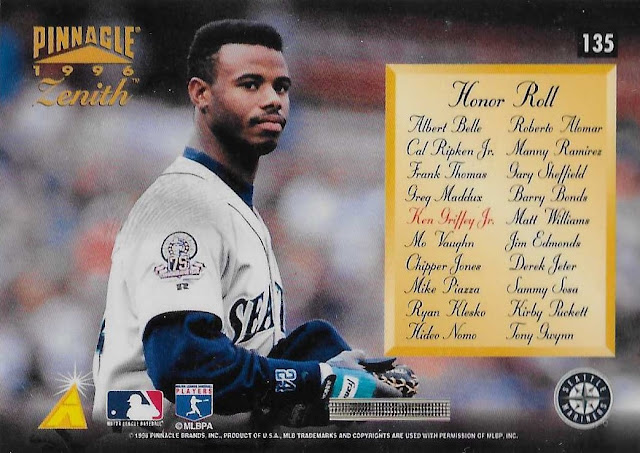 Great photo, nice layout, no complaints with the design or choice of photo – it’s the content here that boggles my mind. Now I understand the concept of an Honor Roll despite never having appeared on one, but I can’t help feeling it’s a bit of a cop out to simply list twenty guys that sell baseball cards. There are no credentials or descriptions of what makes one an “Honor Roll” player – you’re simply on it or you’re not. Griffey had just had his worst year ever in ’95 due to injury. How did he even get on there?

One of the two parallels introduced this year is Artist’s Proofs which feature a bold stamp and gold holofoil in the place of regular gold foil on the base cards. That is simply not enough difference for me to shell out the $30-or-so people are asking for them, so I have zero to show you here. But I’m going to make up for that later on in this very post. Stand by…

Let’s get to the good stuff:

Z-team appeared in every Pinnacle Zenith set, and being that it’s such a characteristically Pinnacle insert, it is my opinion any non-Dufex Z-team insert shouldn’t even count. However, this guy gets a pass for being on acetate, Lord of the ‘90’s insert materials. 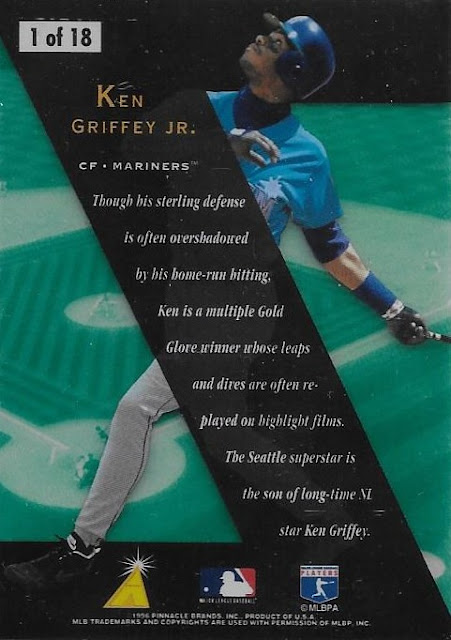 I think they were running out of things to talk about near the end of that blurb - or trying way too hard to side-step mentioning the dreaded wrist injury.

Design-wise, the giant Z has pretty much never done it for me, and this is the biggest there ever was on a card. It’s a clunky eyesore. The green ball field in the background with its perfect lawnmower lines helps a lot, but let’s be honest: never again was Z-Team as cool as it was in 1995:

I mean, how do you follow this big ol' piece of candy? The answer is: you don't. You slap a big Z on some acetate and distract your customers with diamonds is what you do. 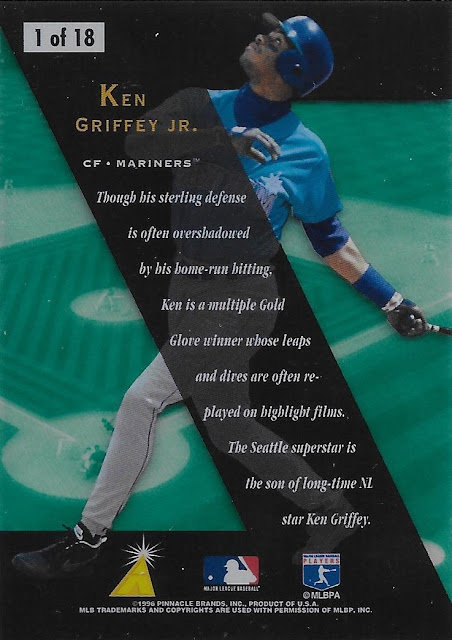 At 1:72 or one in every three boxes Z-Team was an extremely difficult pull, and the prices reflect that even today. Lucky for us Pinnacle did that thing of when a card company makes ten billion samples of an otherwise rare card. This means that as long as you don’t mind a big white “SAMPLE” printed diagonally across your card (only on the front no less), you can save a few bucks here. 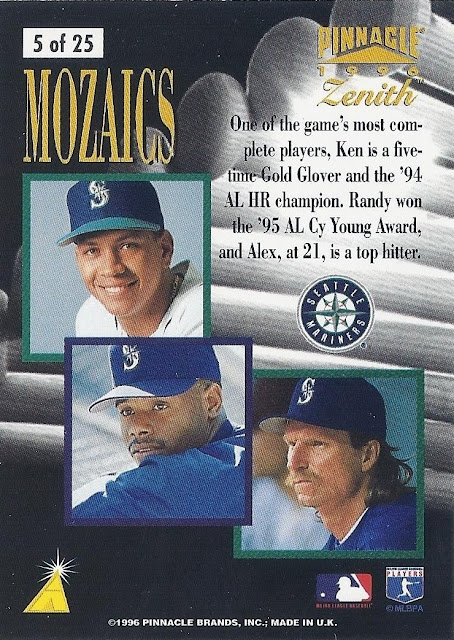 Say hello to the coolest insert of 1996 Zenith and arguably one of the coolest of 1996. This is Pinnacle making the best possible use of their proprietary Dufex printing technology, and I am just flippin’ crazy about it. Mosaic cards are nothing new and they’ve been done before, but Pinnacle absolutely nailed the design here. Randy Johnson had just come off a Cy Young award and A-Rod was, well let’s be honest, selling baseball cards like nobody’s business. I’d like to have seen Edgar or Tino or even Dan Wilson get that third spot, but whatever. Griffey is huge and dead-center. Works for me. 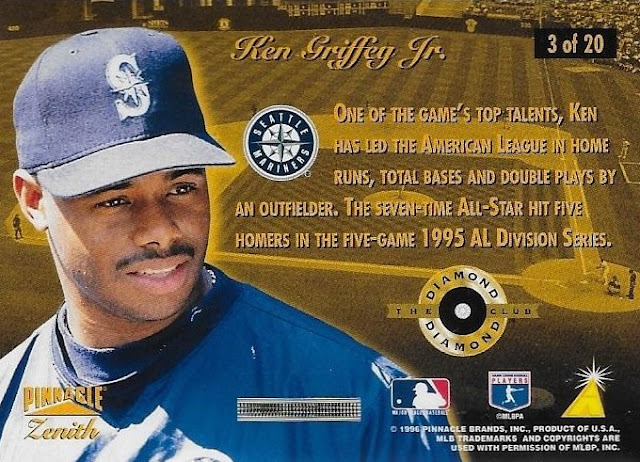 The Diamond Club insert was the big selling point for Zenith in ’96. The regular cards are cool, sure, but there is also a parallel of this insert in which Pinnacle placed diamonds. Like, real diamonds, guys. You can tell immediately where the diamonds went – that conspicuous black circle in the bottom-center of the card.


Without the diamond (which is the case for the vast, vast majority of these cards) the whole effect is incomplete, and not only did Pinnacle know this – they wanted you to know it too. That’s why they pushed this sense of incompleteness even further first by placing on the card a little dent where the diamond would otherwise go and second by including in every single pack a whole separate card with a hole in it specifically designed to protect the almost-always non-existent diamond and the other cards around it.

I must have busted a pack or two in my day because I still have one of those Diamond Club protector cards:


Now I understand the purpose of including the protector cards in every pack – they protect the cards, thwart pack searchers, and remind the pack-buster of the awesome diamond card they didn’t pull – but those little dents are especially biting because they don’t really have to be there. But we are going to get more into this later.

Will you marry me??


Since I haven’t been around the blogsphere in a while you might suspect your old pal has gone soft when it comes to acquisition. Well nothing could be further, my friends. I have a small arsenal of very specific Griffey-hunting methods in place, and when this unbelievably rare real diamond parallel popped up I sprang like gold-medal winning Olympic speed skater Carlijn Achtereekte (sorry – the Winter Olympics were on when I first typed this paragraph - THAT's how long this post has gone un-posted).

I’ll even break one of my own rules and tell you what I paid: it was $149.25. Seems like a lot for most cards, but within moments of posting a photo of it on the Facebook Griffey collecting group (for boasting purposes), I suddenly had PM’s hitting every few seconds with requests for more photos and offers of up to quadruple what I had just paid for it. It wasn’t skill or know-how that won this card - I was simply in the right place at the right time. I can chalk that up to a little vigilance, a lot of luck, and a sweet pre-2008 credit card limit. Ahem.


Let’s talk about the card itself. These puppies fell 1:350 packs or one per 15 boxes. The regular Diamond Club cards (the ones without the diamond) fell 1:24 or one per box. Considering this is a super-premium set, that, folks, is rare as butt.

Let’s do some fuzzy math based on the following year's distribution numbers. 1997 Pinnacle Zenith’s Z-Team insert is numbered to 1000 and fell 1:99 packs. With 9 cards in the checklist, that puts the total pack production that year at 891,000. If we apply that same figure to the 1996 set (it probably wasn’t far off), we can figure out the approximate number of Real Diamond parallel cards: 891000/350 = 2545 total real diamonds. 2545/20 = 127 real diamond parallels per player in the checklist. That’s potentially more available specimens per player than some of the Ultra Gold Medallions from this same year. Of course those don’t have diamonds in them. Also I think my math is a little too fuzzy here.

Since I've never even seen one before I had the chance to buy this one, I suspect there are actually far fewer. 127 is a big run for a card so difficult to track down. I know hard-core Griffey-collecting experts who PM me on Facebook every time I mention this thing. I've seen more Red Crusade Griffey's and there are only 25 of those. The 1996 production numbers must have been significantly lower than 1997 which would mean there are significantly fewer Real Diamond parallels. 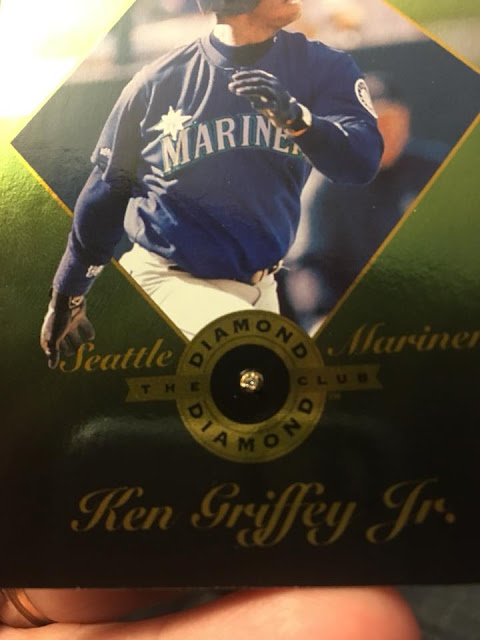 One funny thing about this insert is that the regular, non-diamond version is what Topps would call a refractor (Pinnacle called it “Spectrotech”), but the exponentially scarcer and more valuable real diamond version is not. It’s just shiny foilboard stuff that scans much darker than it should. I’ve done some research on this and have yet to find an image of a Spectrotech version of this insert with the diamond embedded. It appears they either added that effect to the non-diamond cards after having already made the diamond parallel cards or they did it on purpose to keep people from faking it.


This difference in the foil has no bearing on value – it’s just a funny quirk and an easy way to spot forgeries.

But wait - remember those dents they put in the regular, non-diamond versions? With this Spectrotech info, we can deduce that Pinnacle put those dents in the regular Diamond Club cards KNOWING FULL WELL that they would never have a diamond placed in them. They are a strictly a taunt. Were the cards identical apart from the diamond, the dents would make sense; but they’re not! They were trolling us! Pinnacle really knew how to get to us collectors, didn’t they? 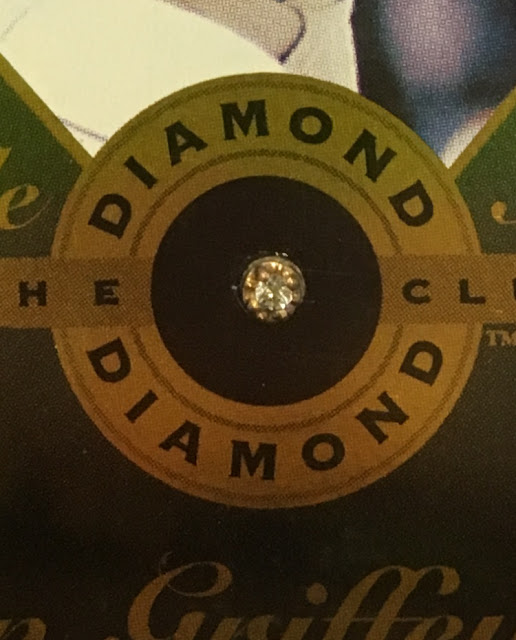 Anyway, if you are a serious Griffey collector or ‘90’s collector or both, you know how sought-after these Real Diamond parallels are. When I got this card back in February, I was already fairly certain this would be my #1 acquisition of 2018. It now sits in a very thick case in my safe deposit box where I am not tempted to eBay it for ridiculous amounts of money. I mean, I’m a little tempted, but if I sell it I know that I will never ever see another one of these again. No way I’m letting this one go anytime soon.

I’ve always been a top-down collector, that being someone who starts with the toughest card and works his way down; but these days there are very few Griffey cards I’m anxious to get my hands on. That being said, here are the cards I still need from 1996 Pinnacle Zenith:

Grey whales all, but nothing mind-blowing. Nothing with goddamn DIAMONDS IN IT.

Also, fun fact: this is not the last Griffey card I acquired in 2018 with a real diamond embedded in the surface. Oh, I'm still very much here, my friends.

Now, please enjoy these bonus unused titles for this post:

I wonder who will be president by the time I post again?
Posted by The Junior Junkie at 10:02 PM