I assume this has happened to some of you, but I was drinking in a bar with some friends when baseball cards came up.  One of my friends, Dr. Dan, mentioned that he had an old baseball card collection that I could have it if I wanted it.  Far be it from me to turn down cards of any kind, but he told me there were definitely some Griffeys in there.  Where do I sign?!? 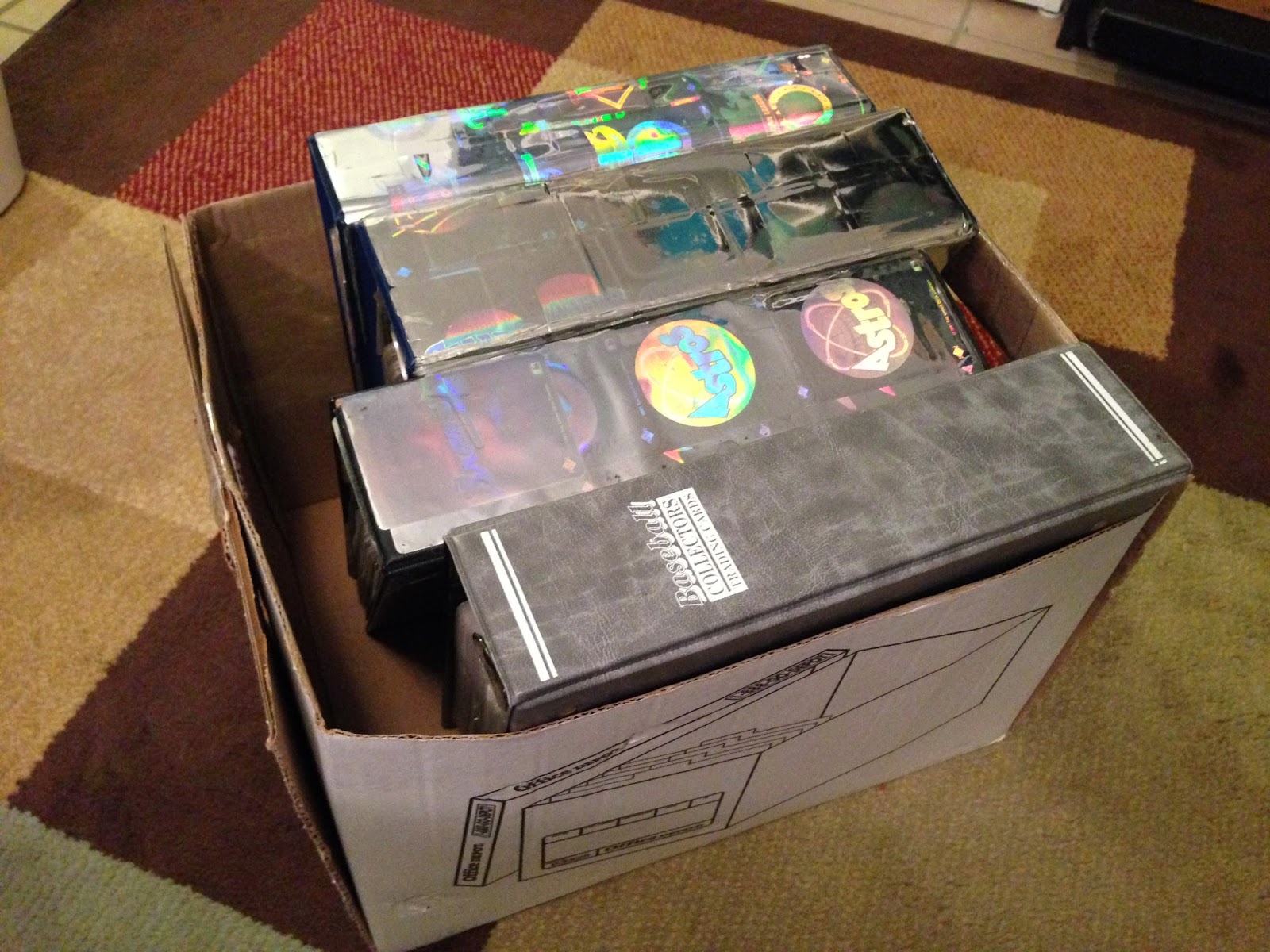 His collection was comprised of four binders.  The first was a mostly-complete set of 1990 Topps, the second a very complete set of 1991 Upper Deck.  I hardly ever get to see complete sets in binders as mine are in longboxes.  It was very satisfying to look through - I see why everybody uses binders for these.

The other two binders were an amalgam of rookies, parallels, and generally awesome cards that we'll talk about in a minute.  Let's talk about the binders themselves for a moment: 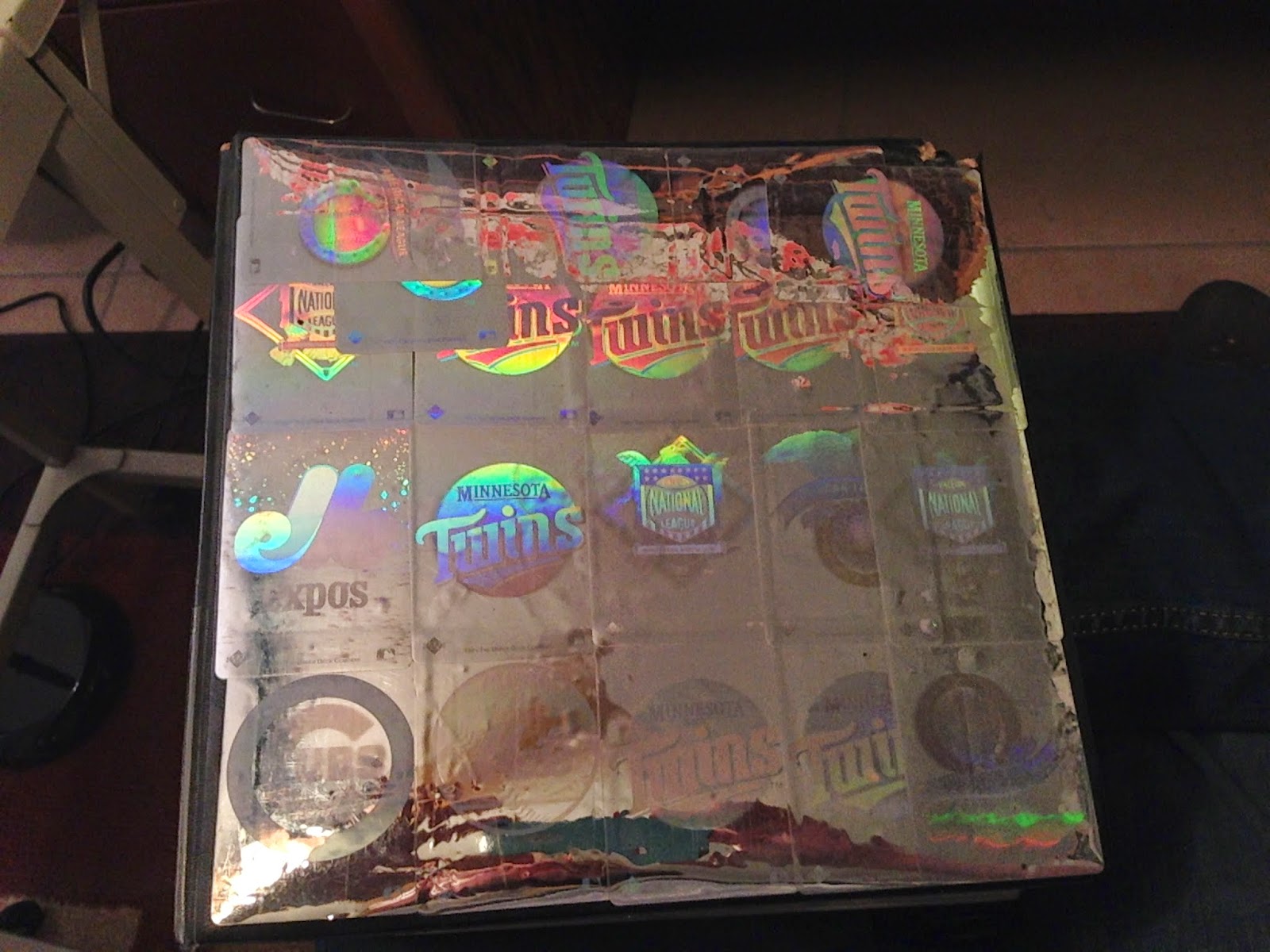 As you can see he wallpapered every binder with UD hologram stickers.  I told him he must have busted a lot of packs of 1990 Upper Deck because they had the big square stickers while 1989...."had circles," he completed my sentence.  At that moment I realized that this guy I'd known for so long had been a real collector at some point, and our potential for rambling, drunken conversations exclusive to everybody but us just exploded.

There are so many cards I want to show off that I just scanned a bunch of the whole binder pages.  Here's the first page from one of the binders: 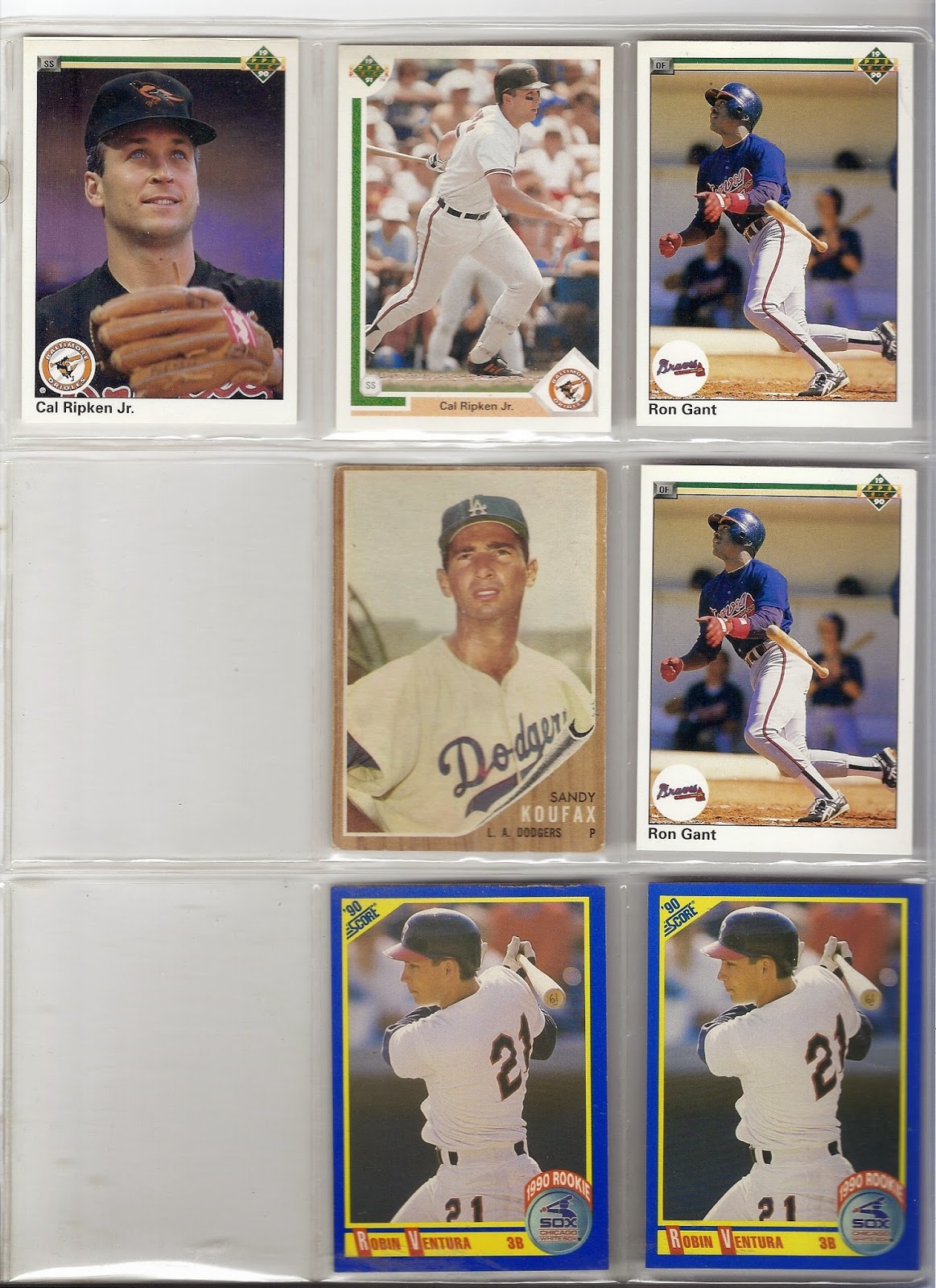 Is that what I think it is?  Yes!  Not one but two Robin Ventura Score rookies!  There's some definite potential here... 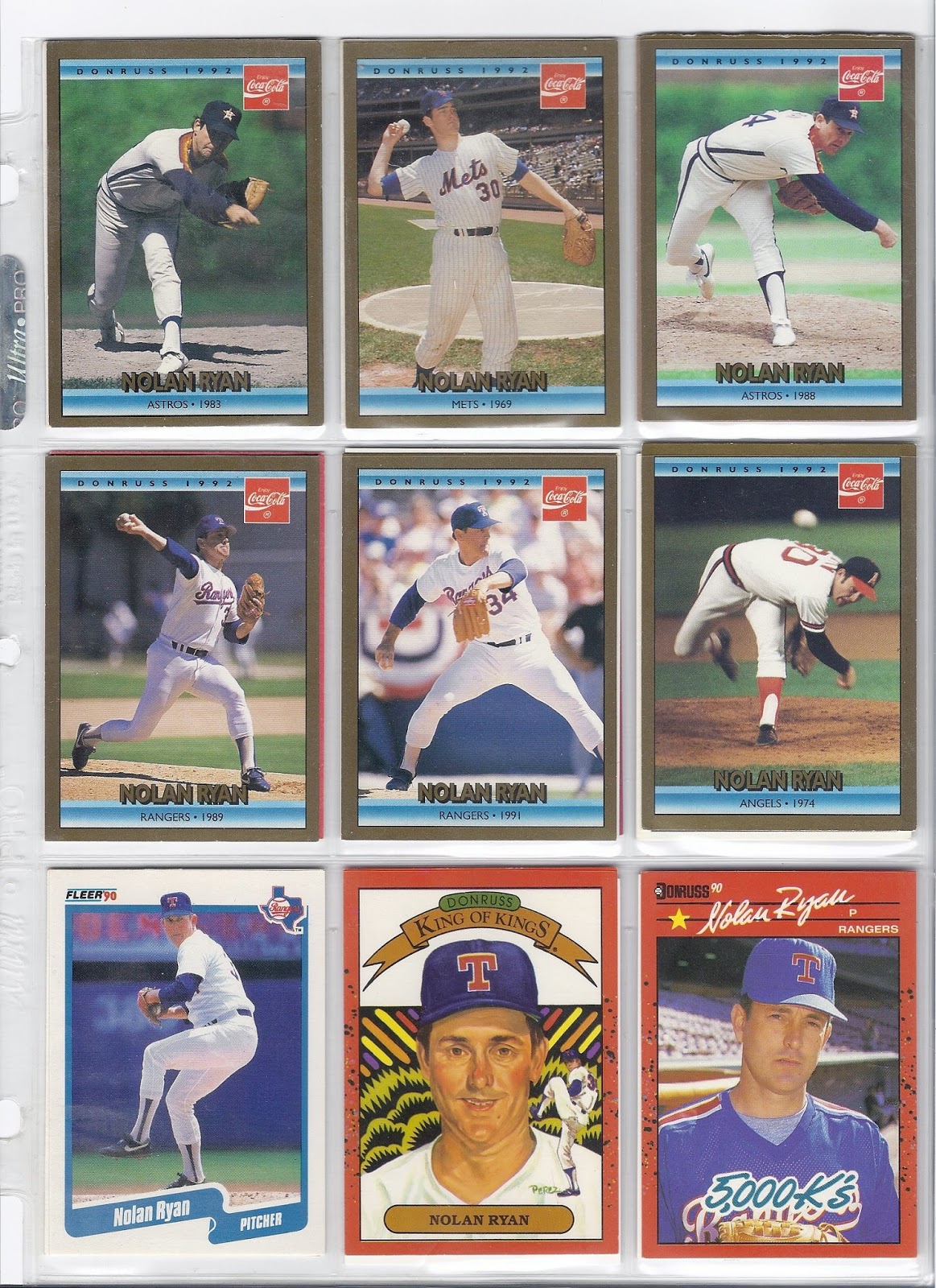 As you will see, there were a ton of Nolan Ryan cards, including a few complete mini-sets such as that '92 Donruss Coca-Cola set. A great '89 Topps Ripken cut-out and an Upper Deck Big Hurt rookie I didn't have yet.  Just look at the names on that '83 highlights card. 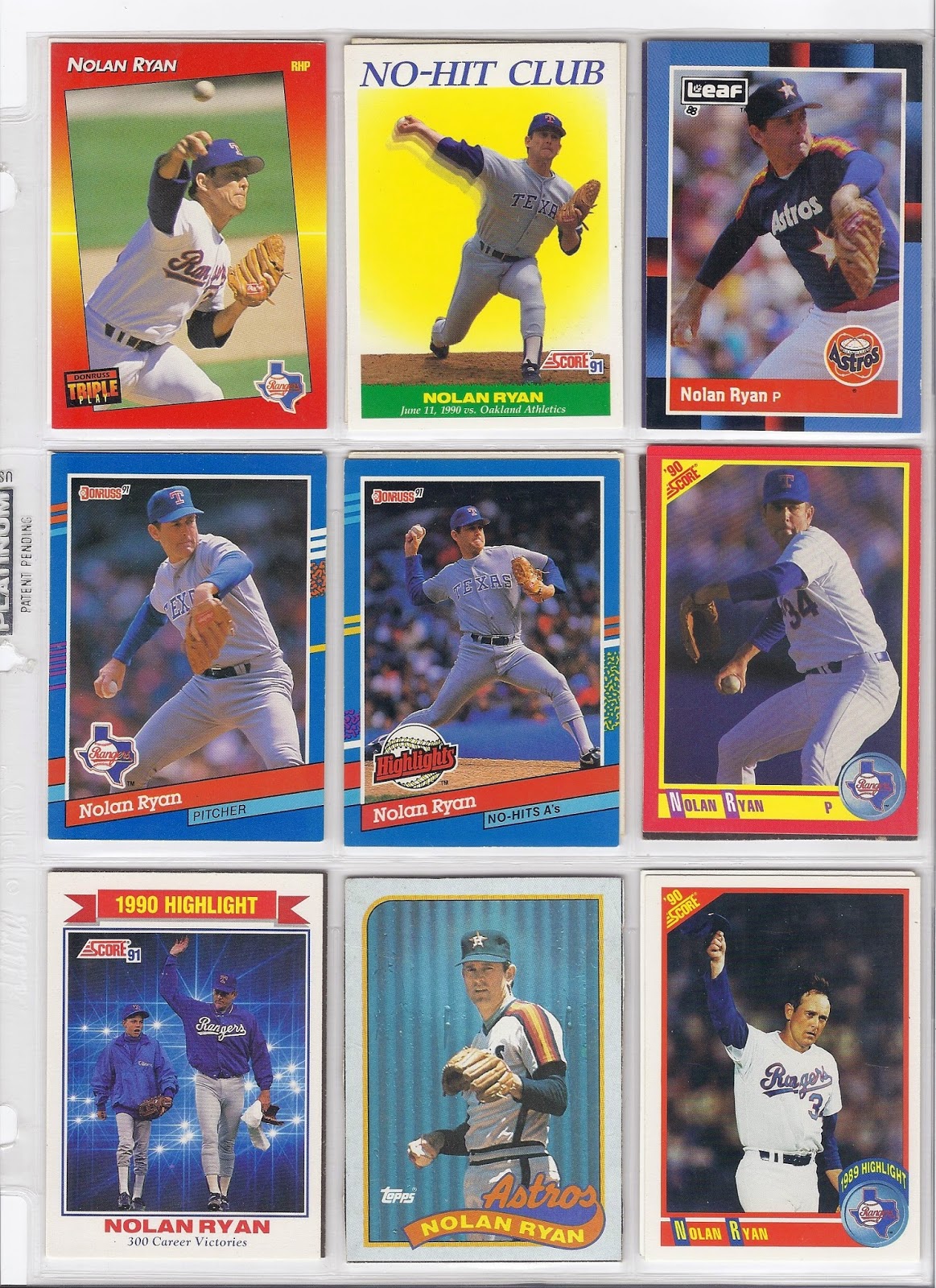 More of The Express and another '89 Topps cut-out. 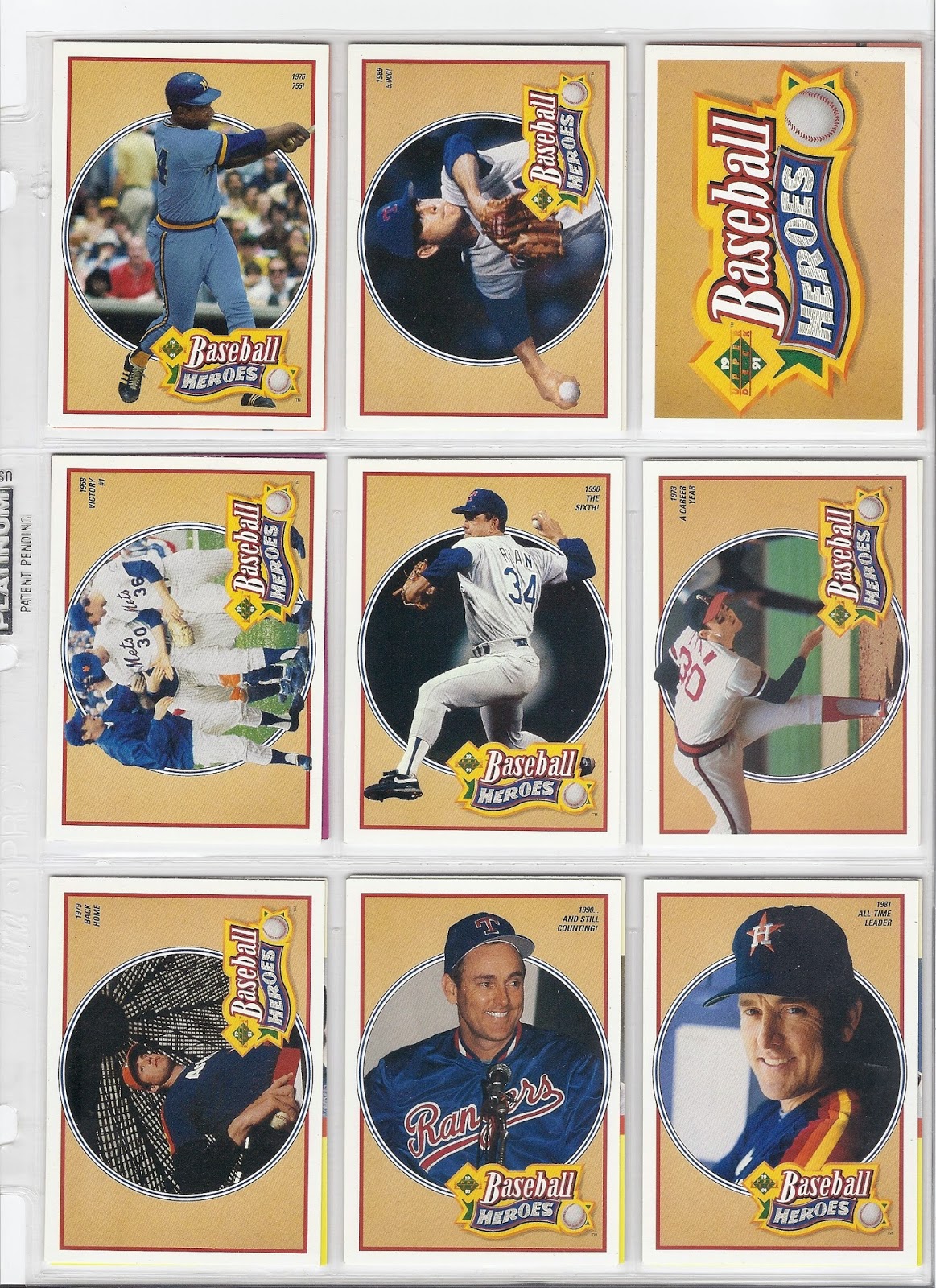 These were the first of many from the universally-loved UD Baseball Heroes set. 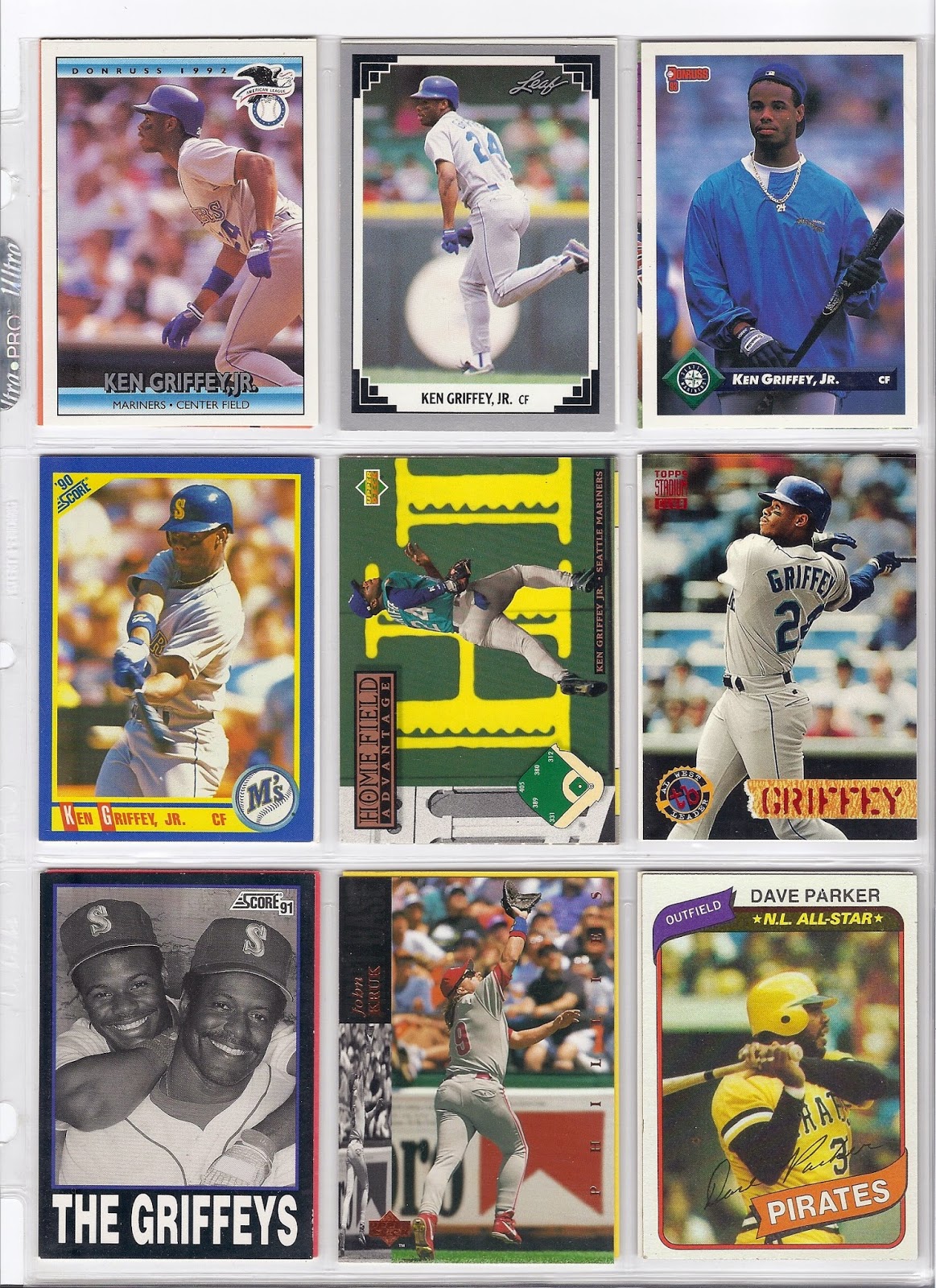 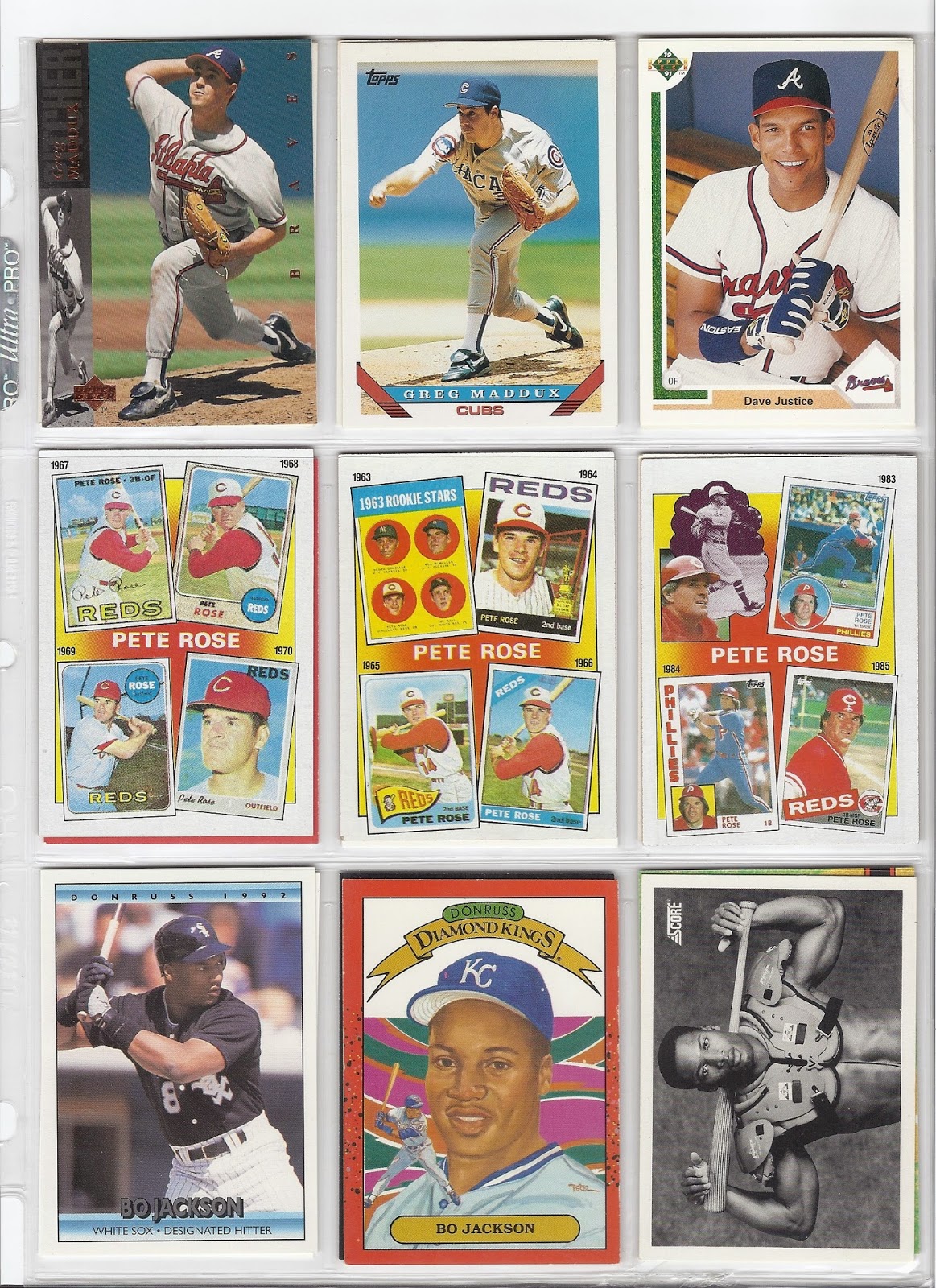 I have one of those Pete Rose Topps 4-card tributes, but here's the rest along with fresh-faced, untainted Dave Justice and one of the most popular Bo Jackson cards of all time. 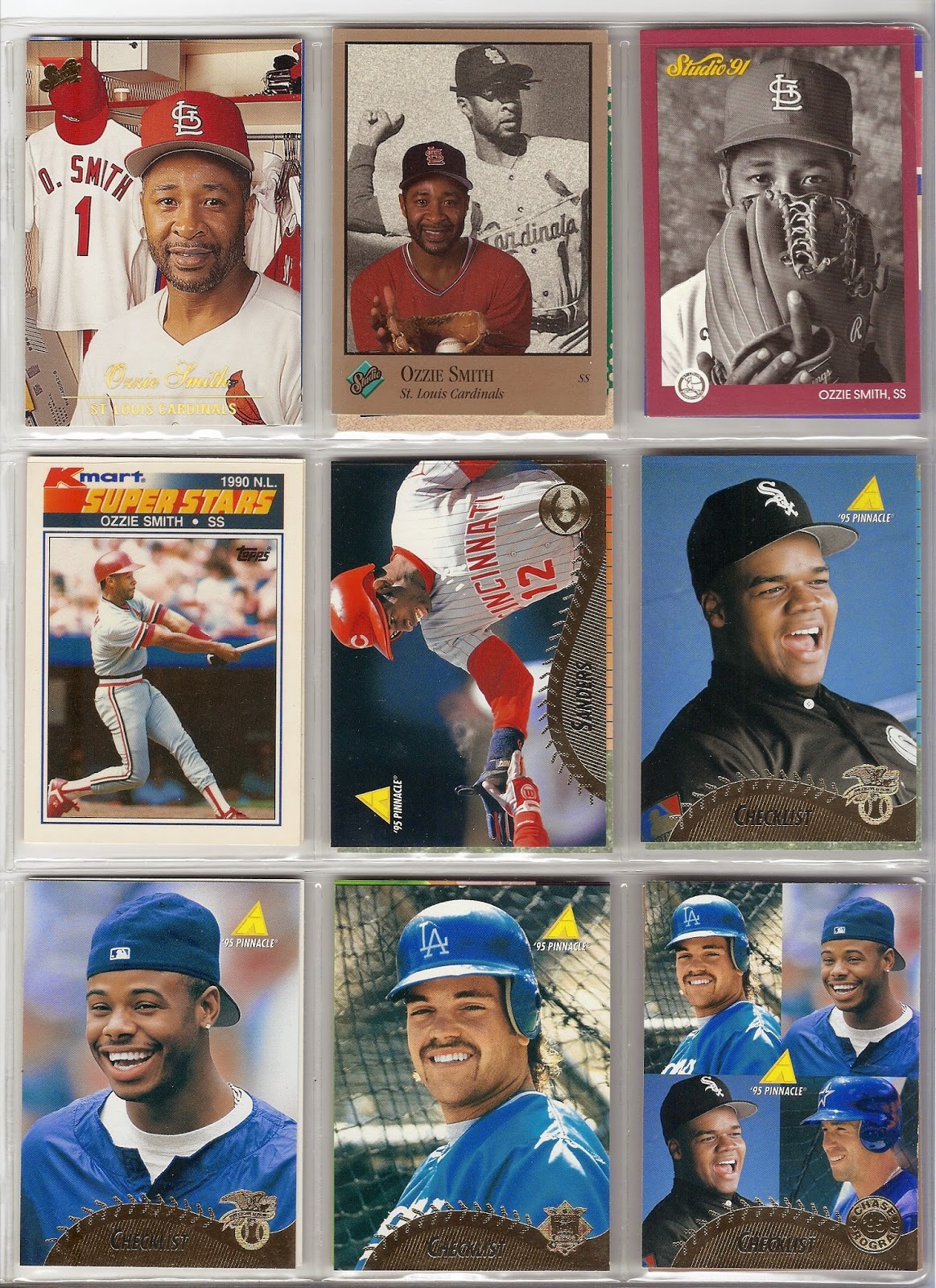 '95 Pinnacle!  This is one of the later sets to be found in the binders.  It was clear that I continued collecting for a couple years after Dr. Dan quit.  He probably saved a lot more money than me in the 90's. 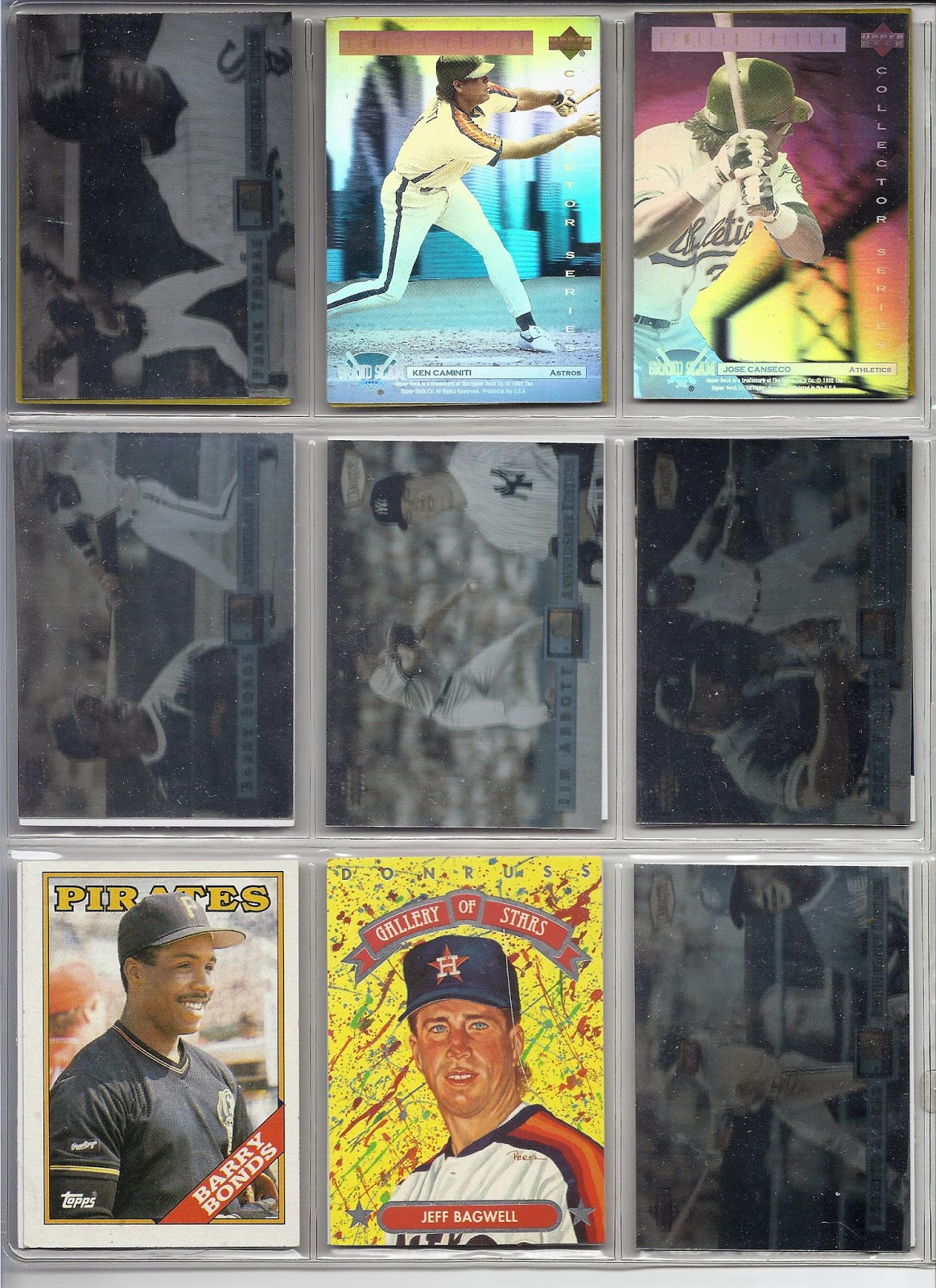 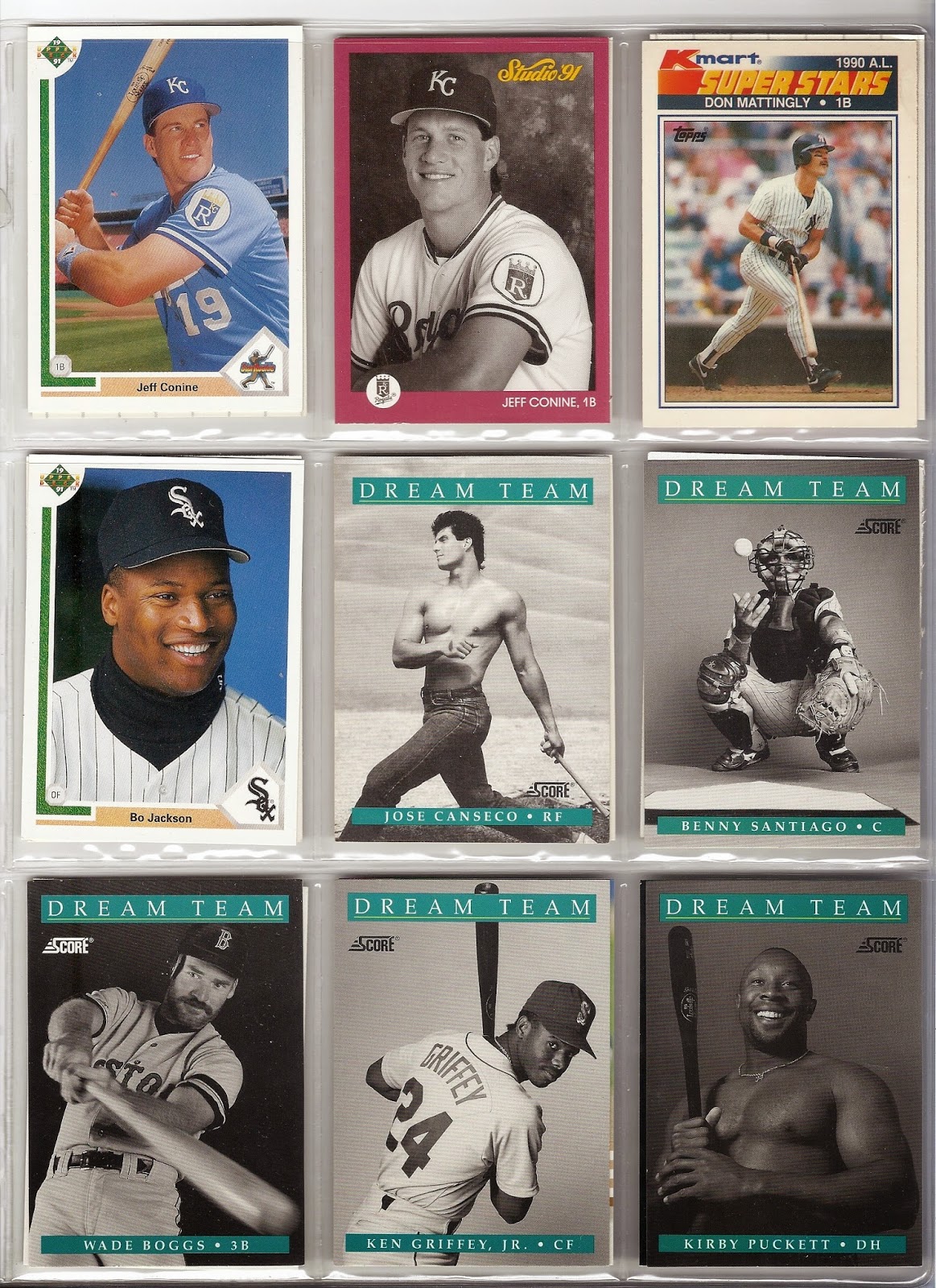 All the best cards from the excellent Dream Team subset. 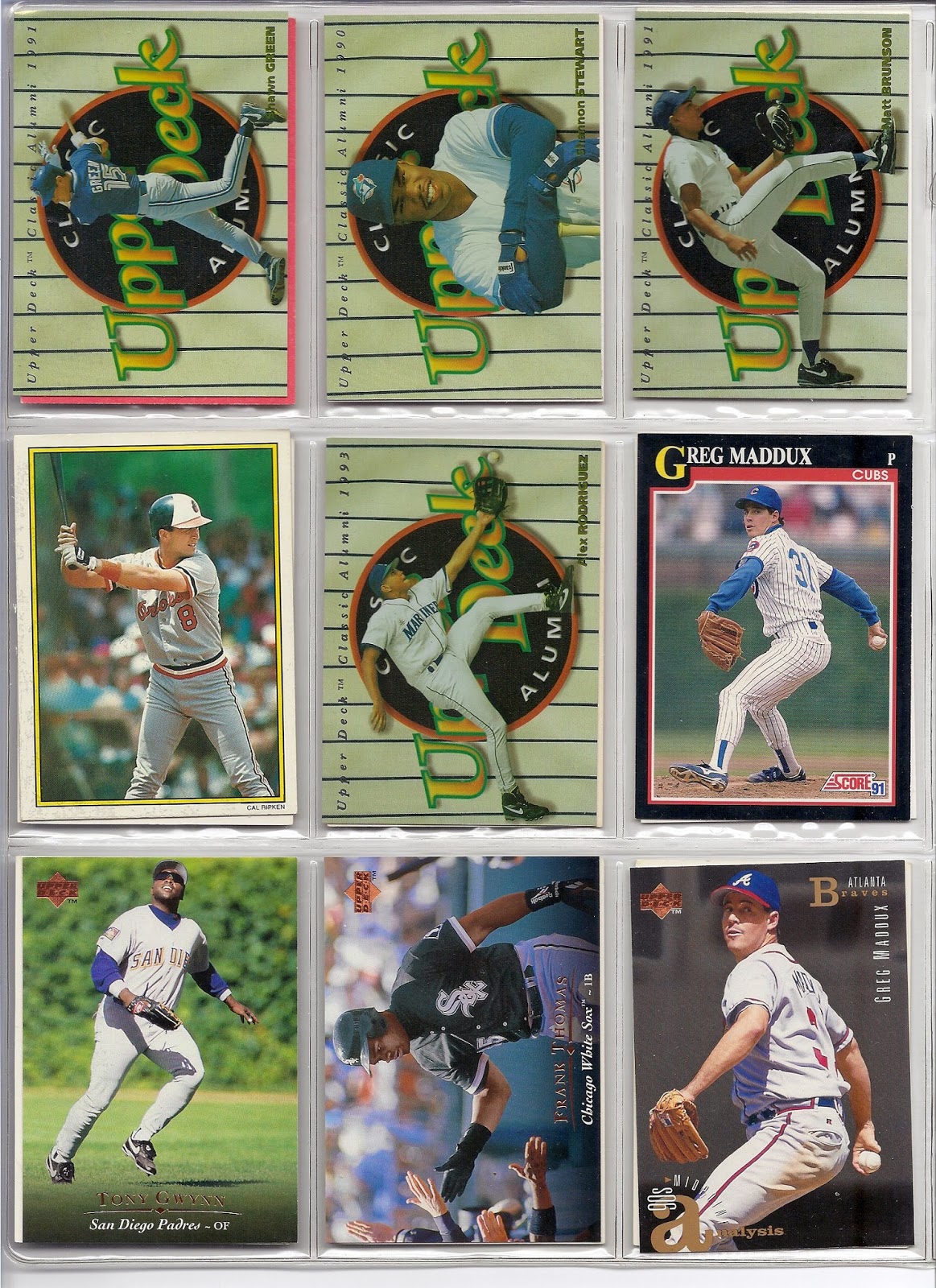 '94 UD rookies, including A-Rod.  These really are some of the best-looking rookie cards ever made. 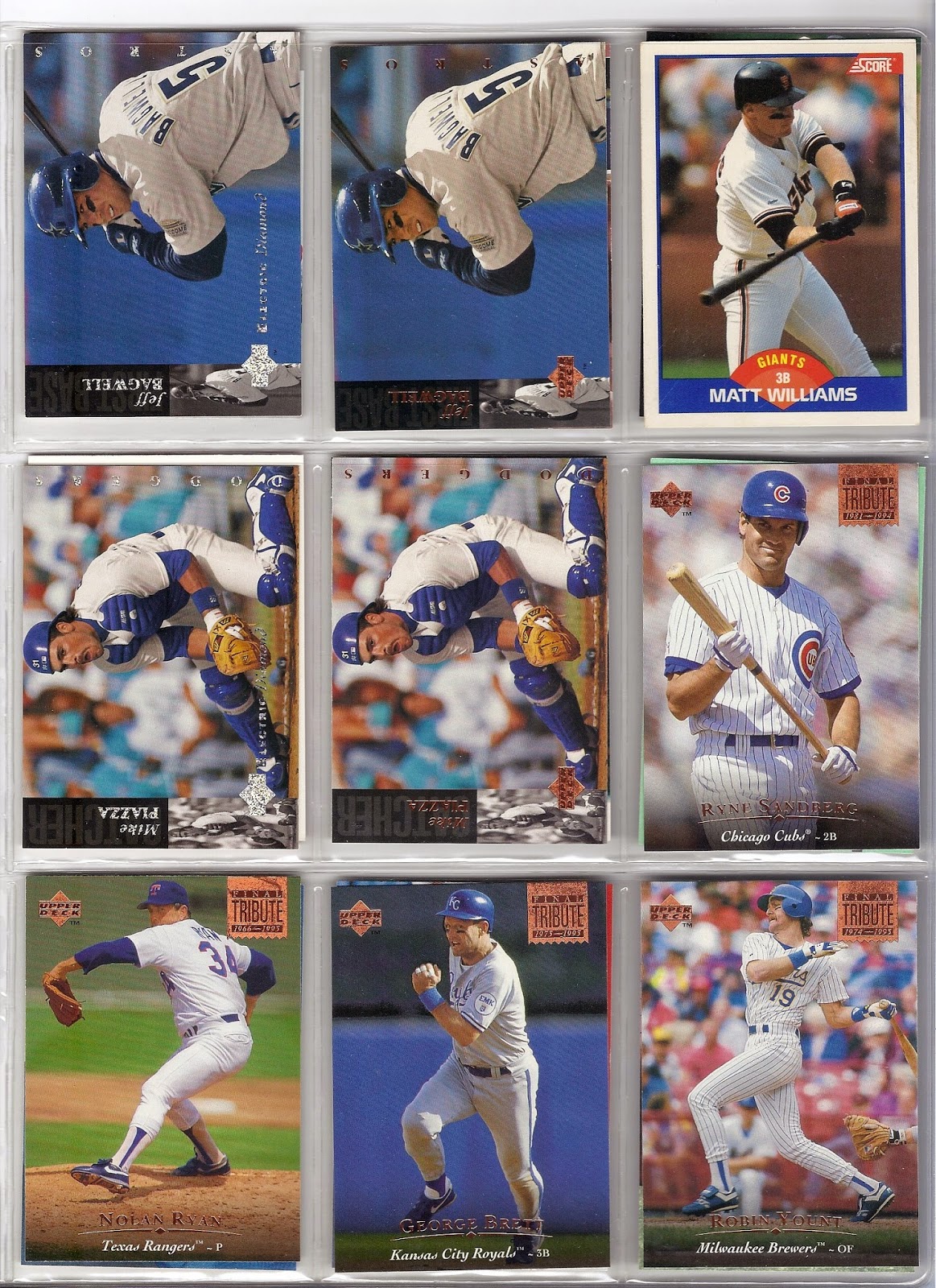 Here's something I've wanted for a long time - all the '95 UD Final Tributes.  Perusing these binders put me over the top: I will start building this set and soon. 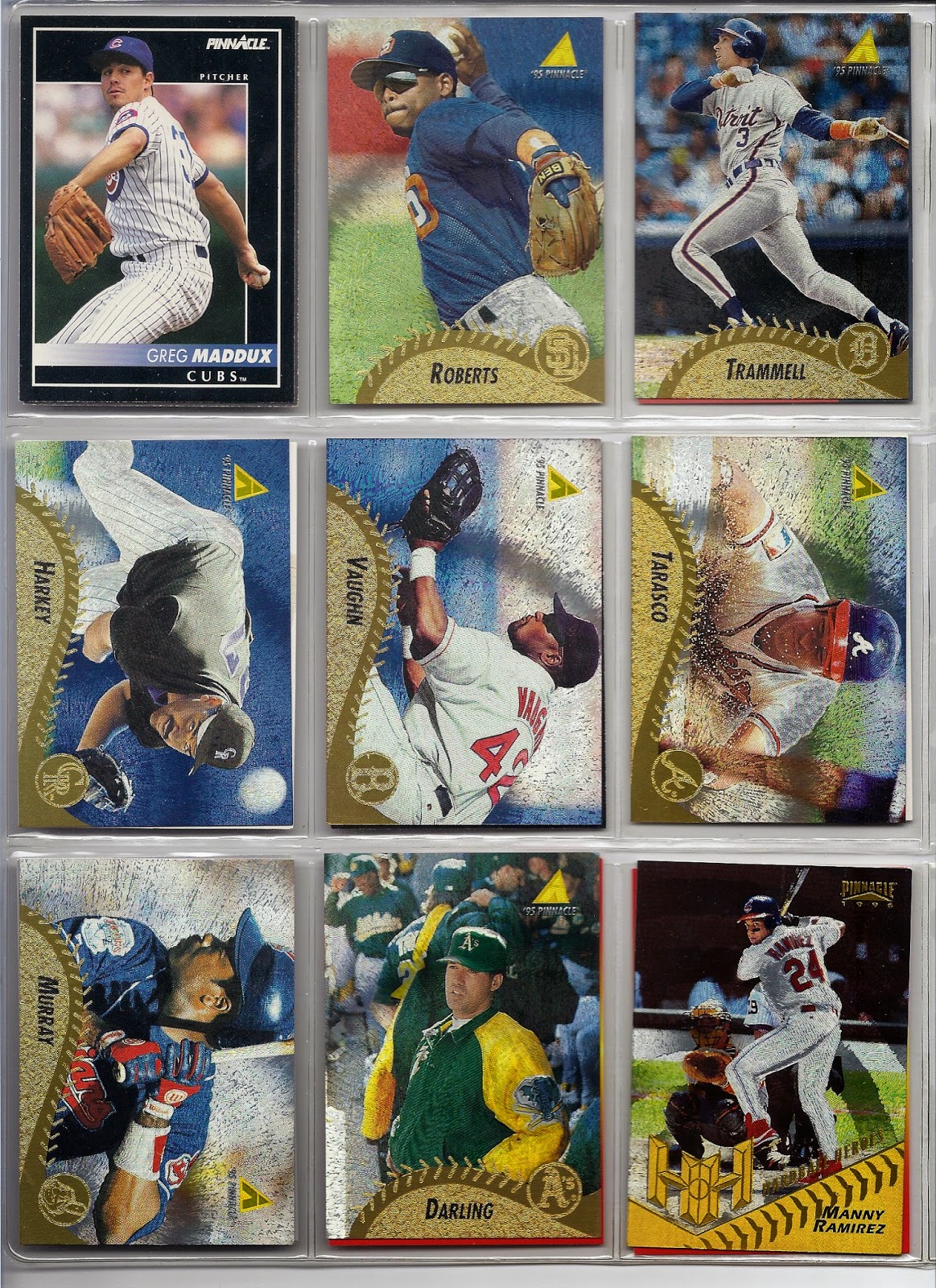 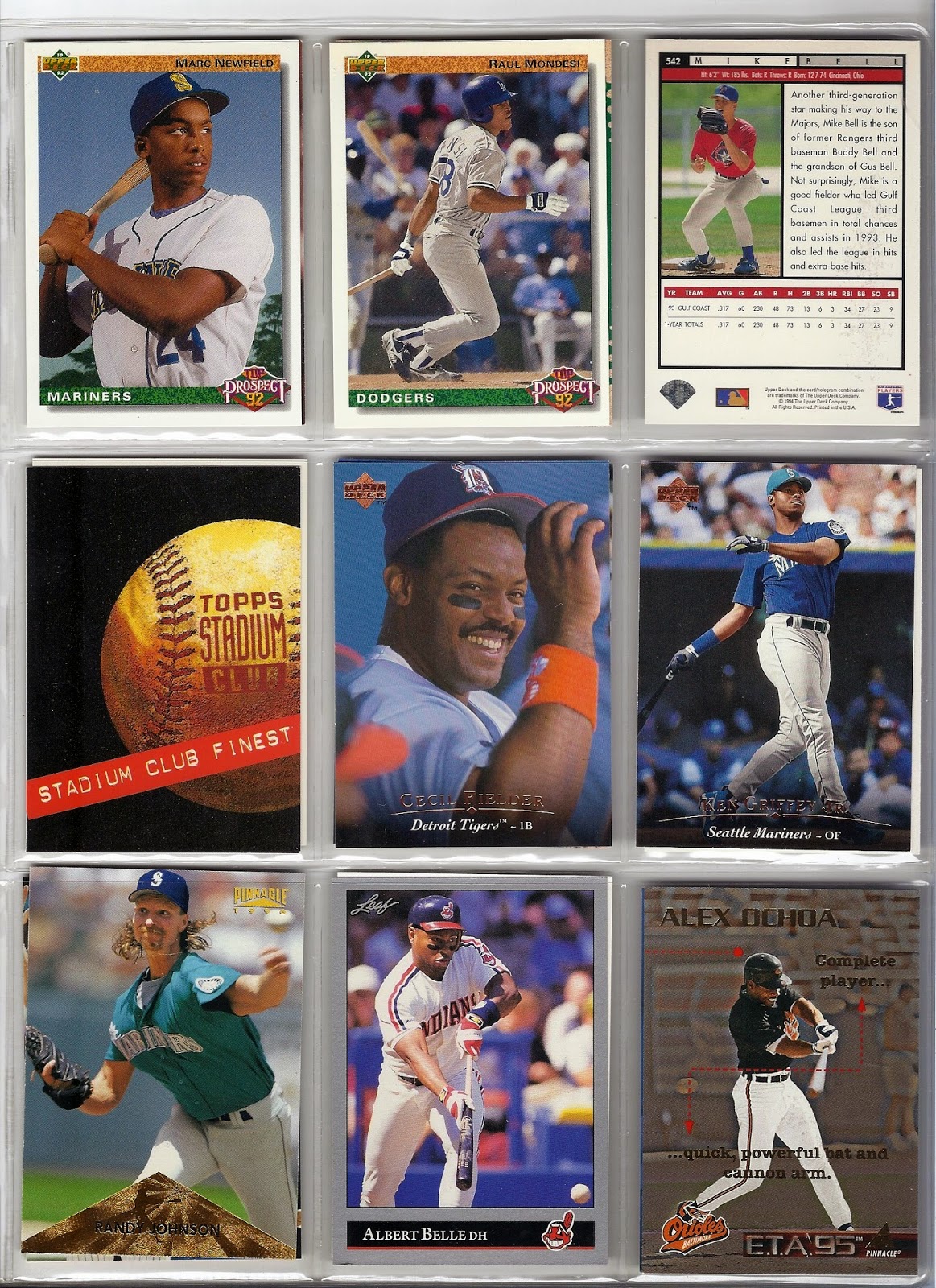 This is a pretty typical page from the binders.  I scanned it because it has a Griffey in it, but I eventually quit doing this.  Total Griffey count forthcoming... 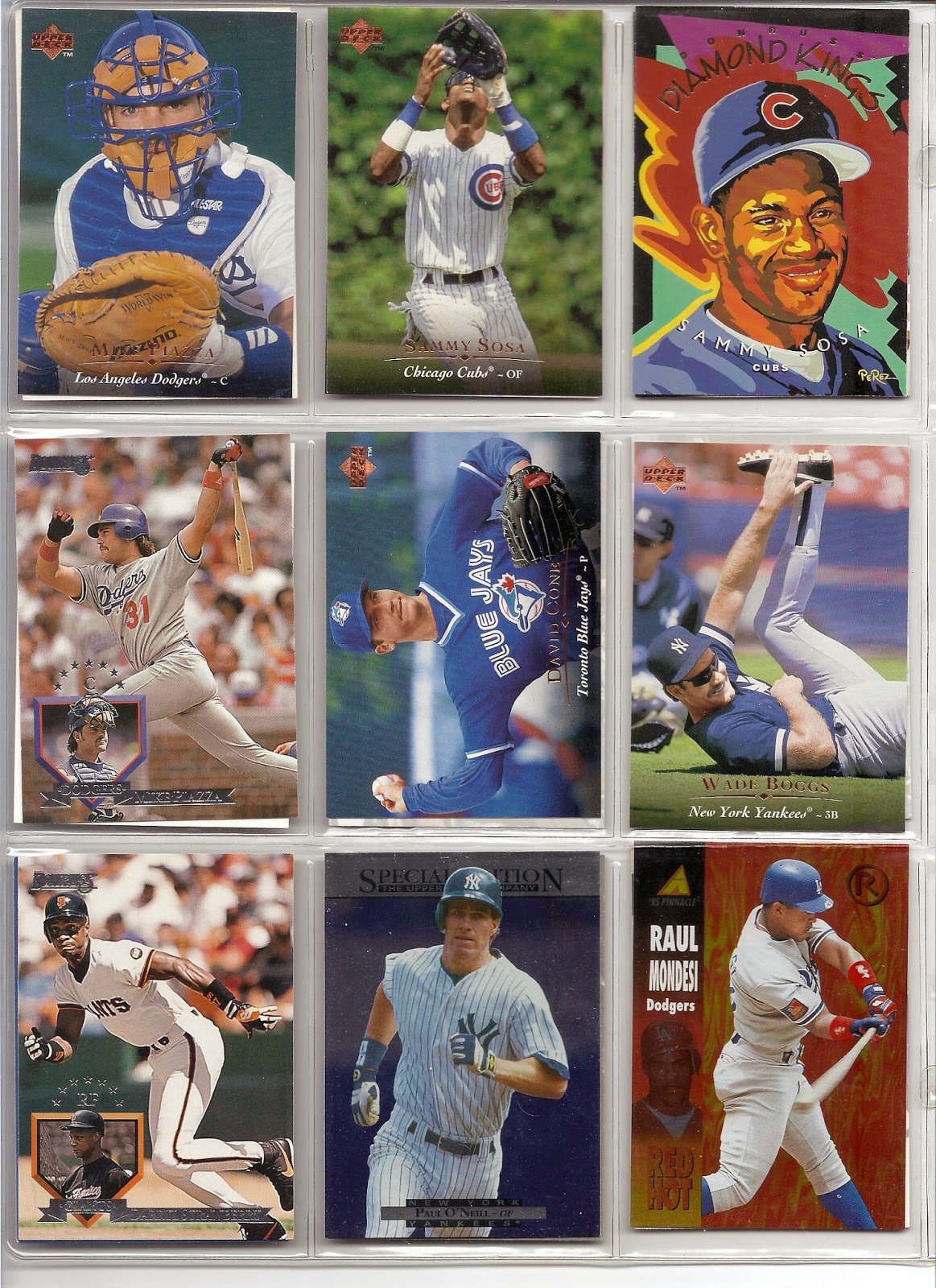 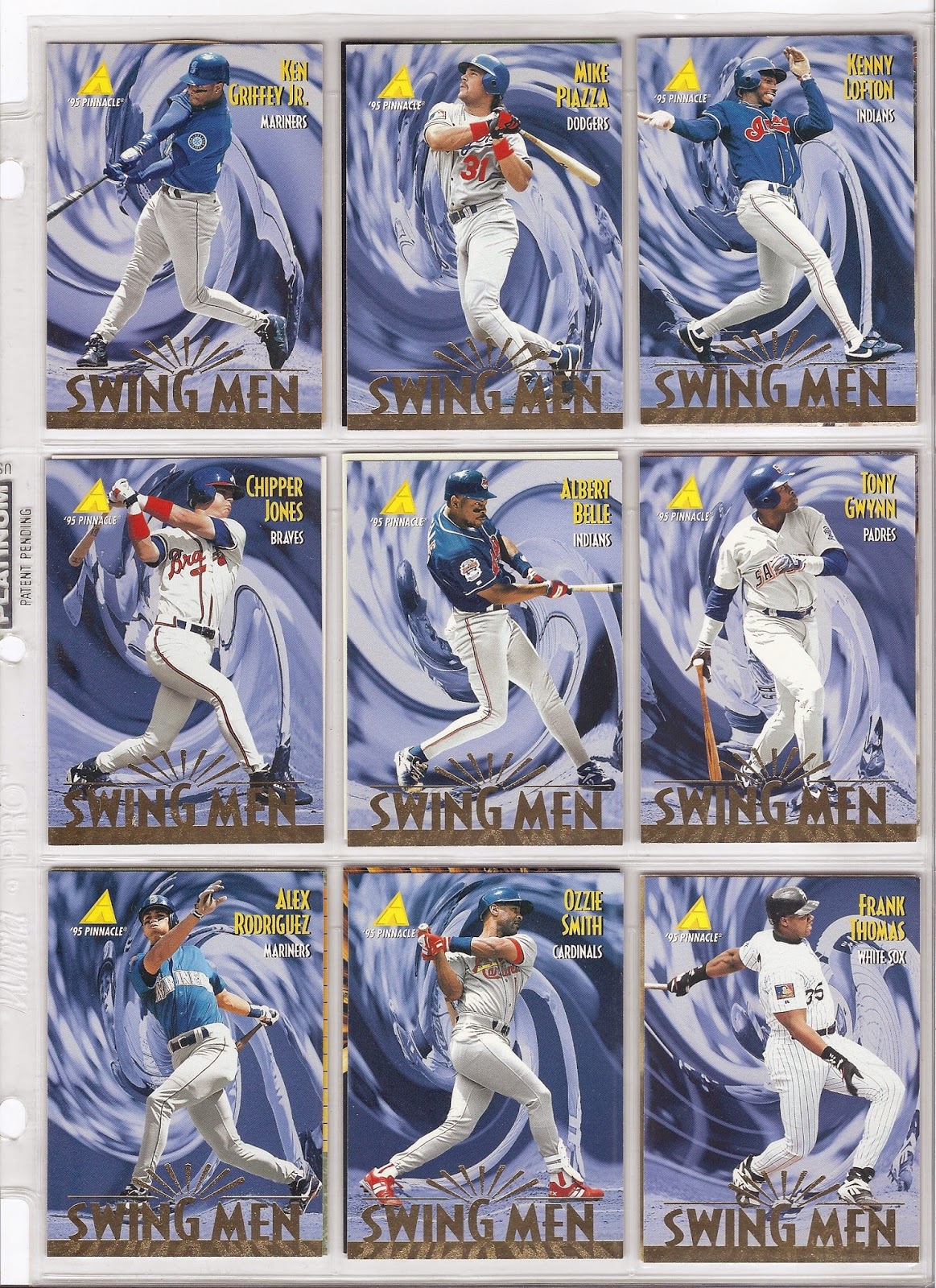 I always liked this subset, but now it looks like I'm going to be building it.  I assume this is the majority. 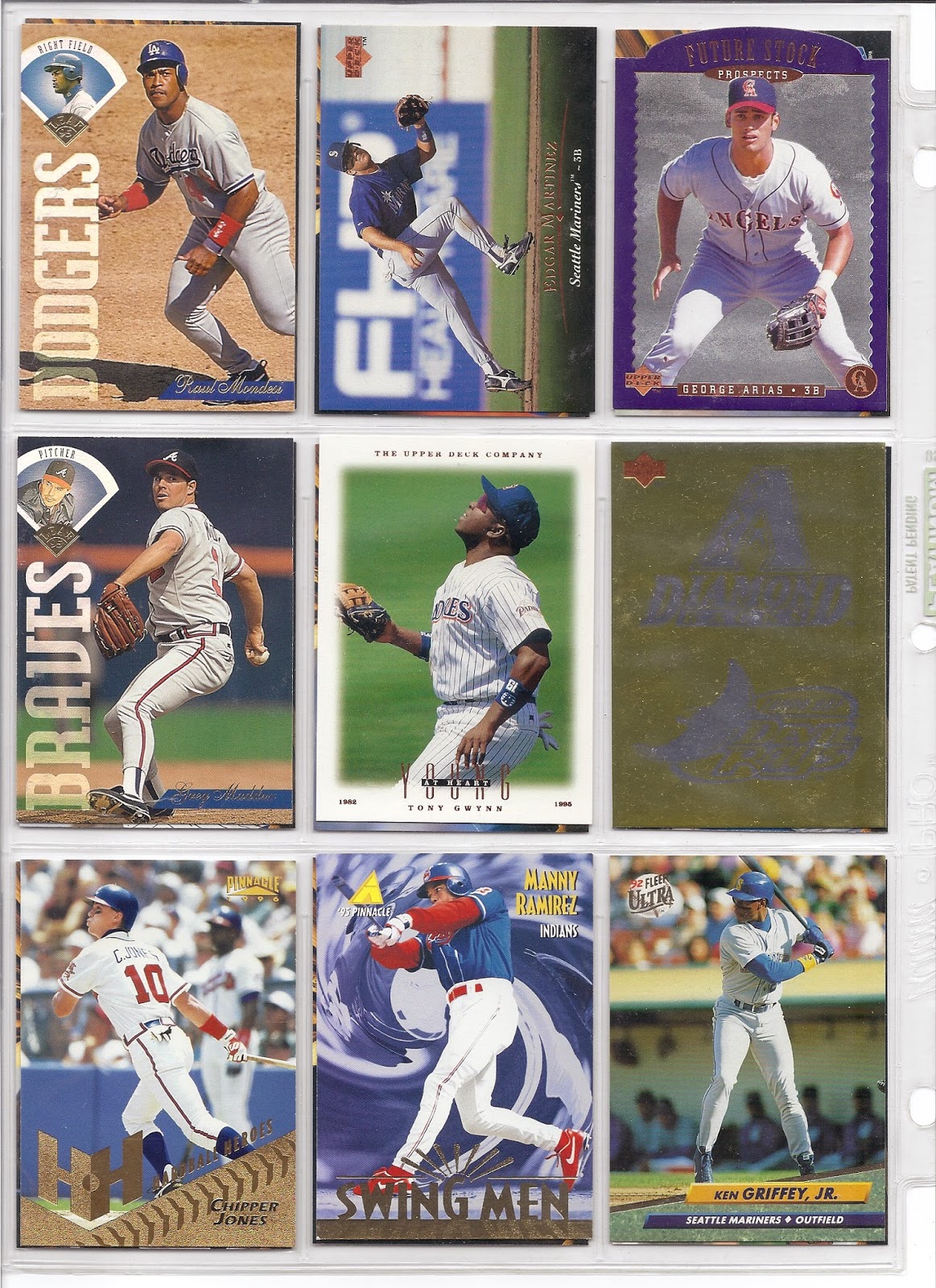 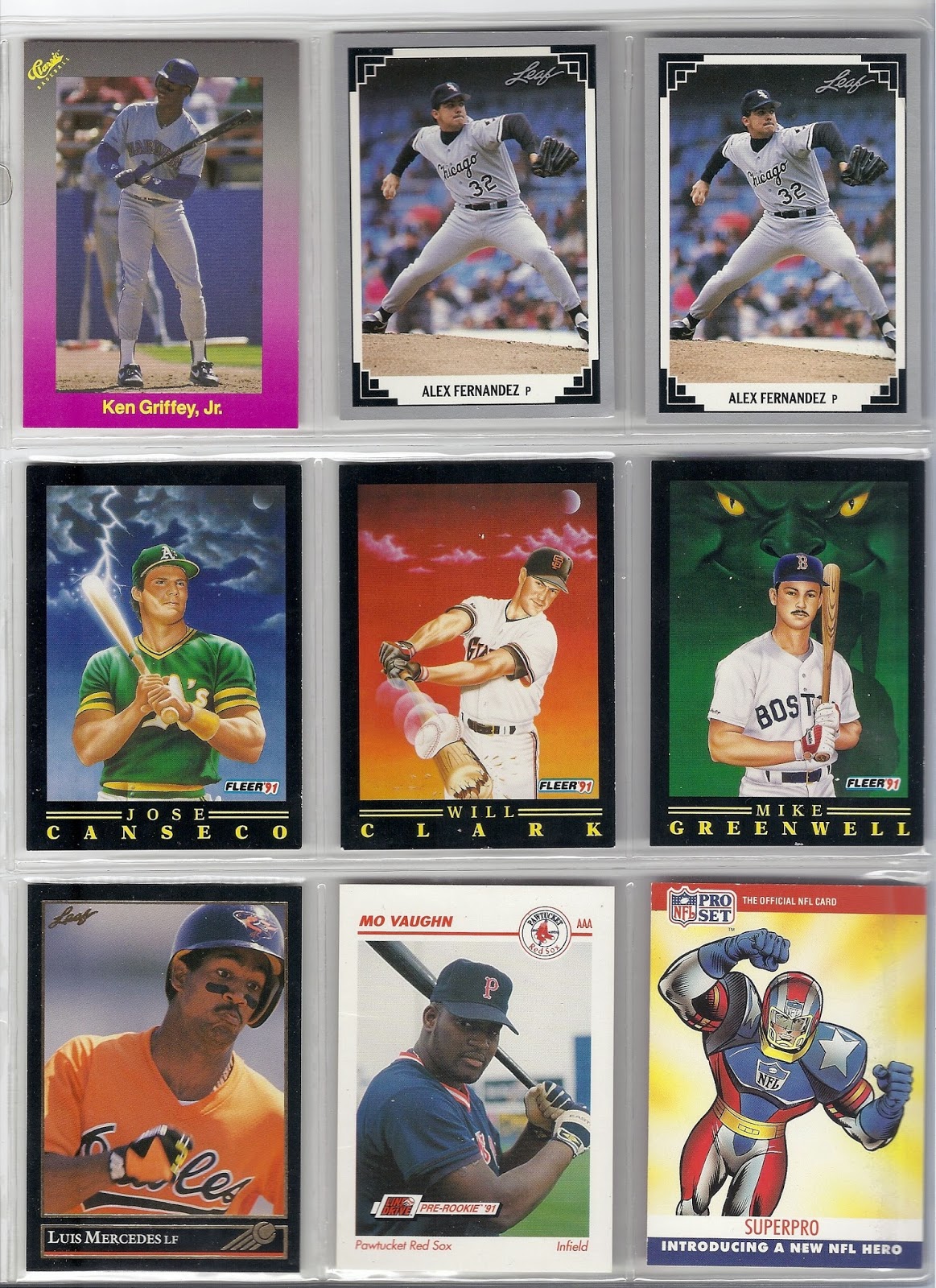 Will Clark, mo' Griffey, and a Mo Vaughn pre-rookie. 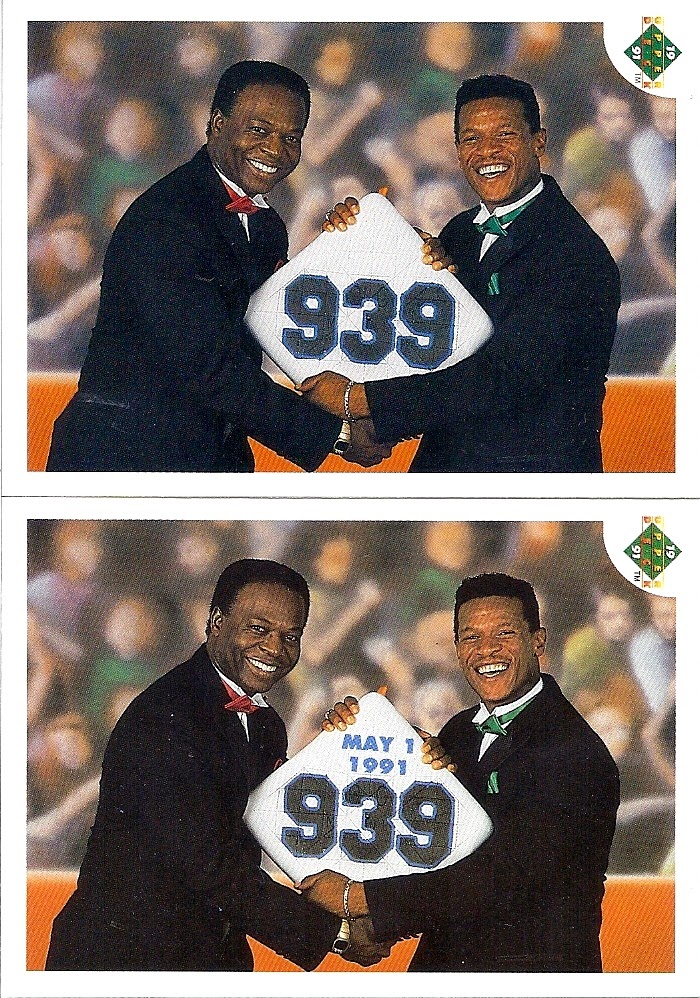 The regular and error versions of the great Rickey Henderson/Lou Brok stolen base card. 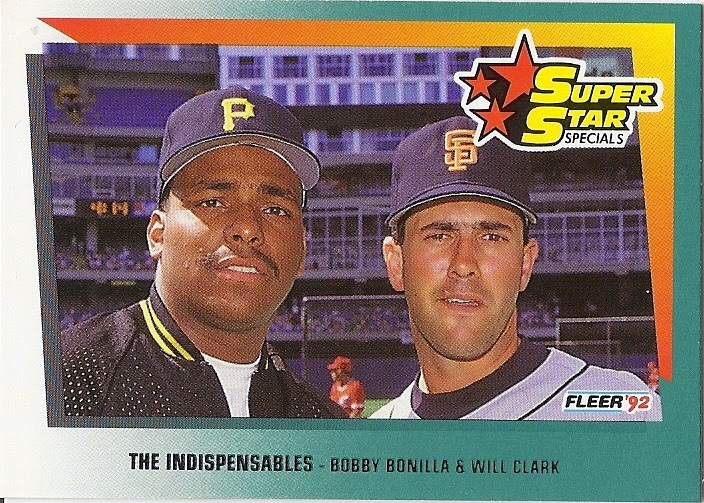 One of my most prolific PC's, Mr. Will Clark with the once-beloved Bobby Bonilla. 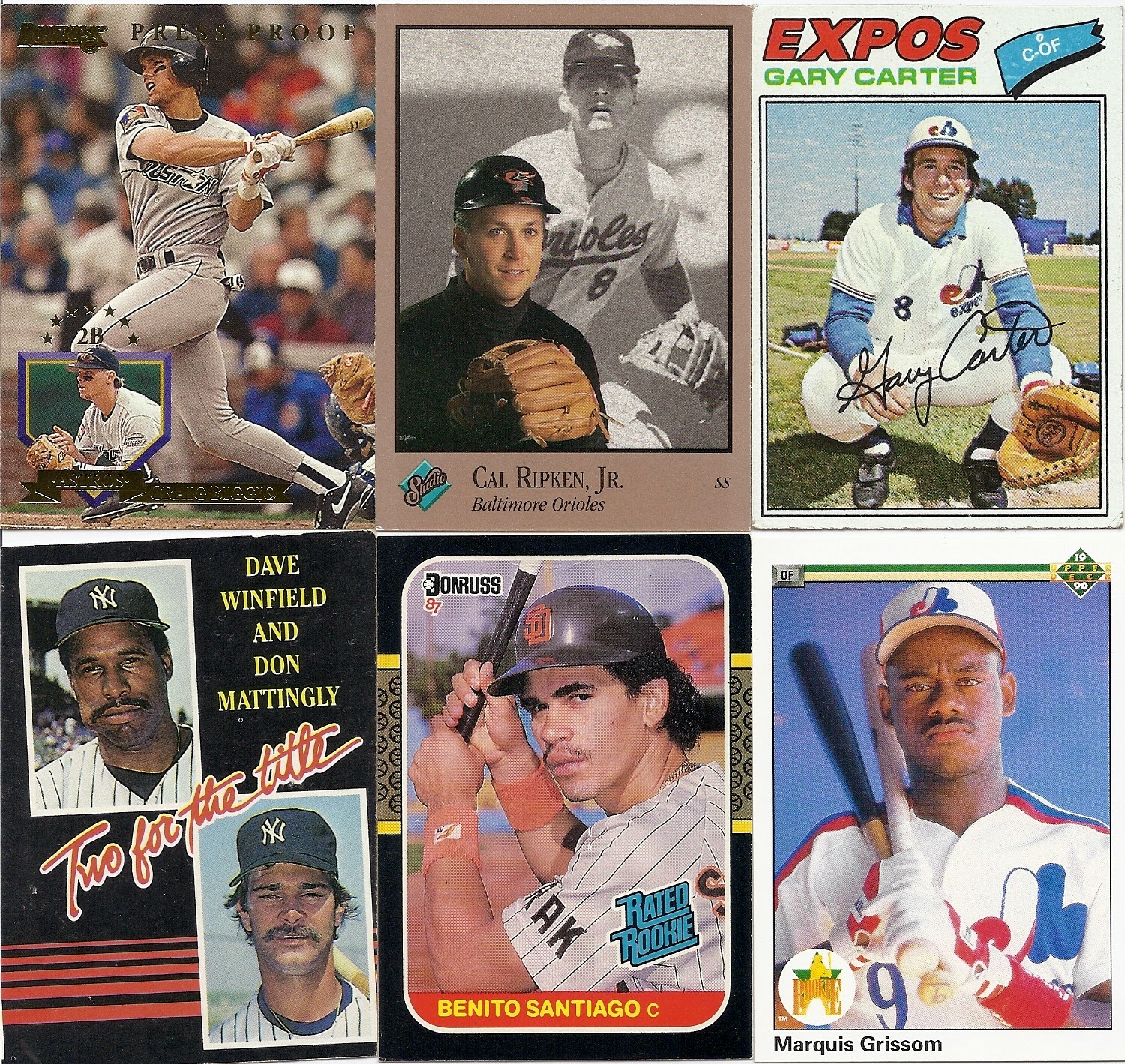 A few more cards I pulled out of pages to show separately.   I've never seen that "Two for the Title" Donruss card, and that is a Press Proof Biggio from '95 Donruss.  These are pretty rare. 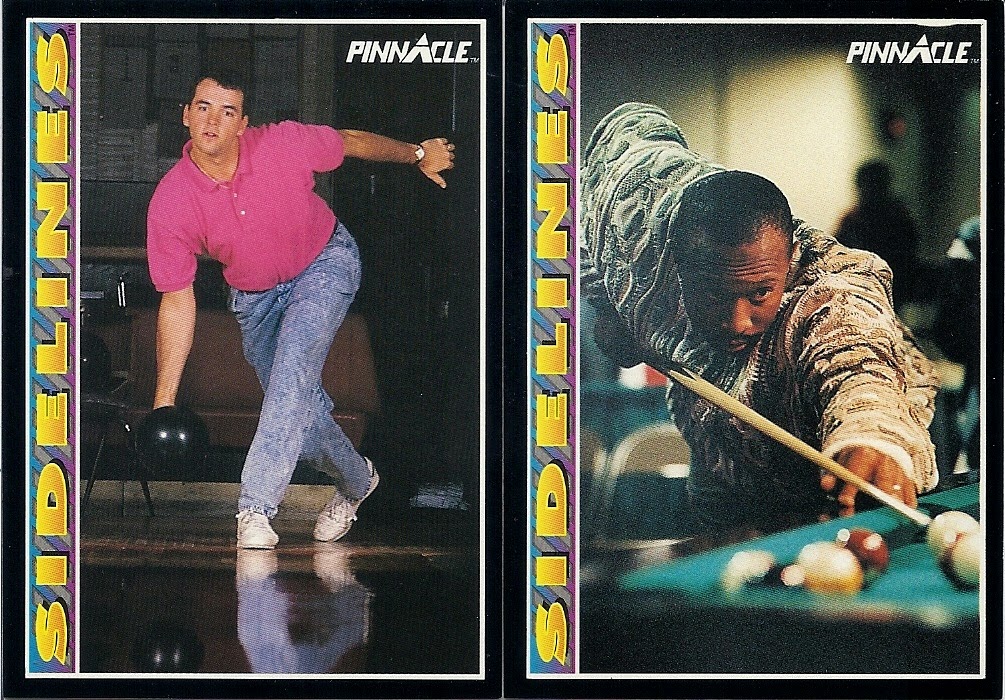 I was just messing with you earlier.  Here's a good look at the back of that Koufax from the first page: 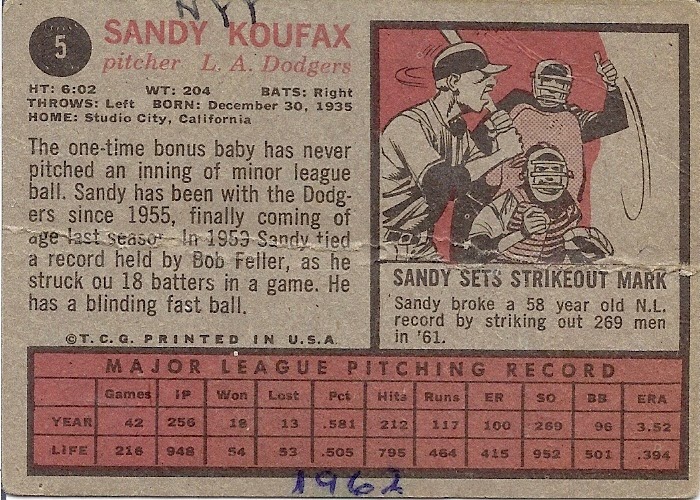 Somebody wrote NYY across the top, but at least they got the set year right.  As you can see, the condition here is pretty gnarly, but it doesn't detract from the overall look of the card.  Of course I put it in its proper place: 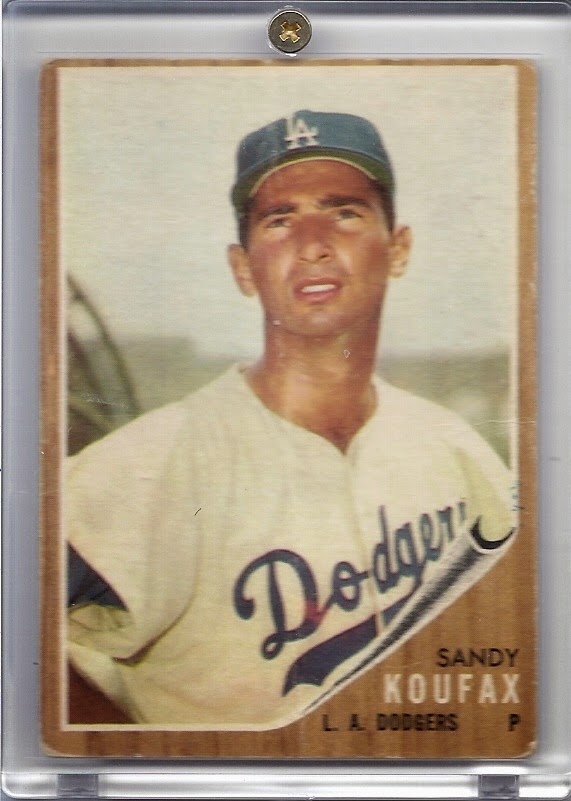 My plan now is to go through them all, separate out all the Griffeys and keepers, and divide up all the goodies for different bloggers who collect them.  There will be a few commons that come out of these binders, but not many.  This was a solid collection.

The Koufax and the Biggio Press Proof were the most valuable cards to come out of the collection, valued at roughly $20 and $10, respectively.  There were a total of 26 Griffeys not including those in the set binders.  There were also a ton of Nolan Ryan, Cal Ripken, Frank Thomas, and all the biggest stars of the early 90's.  I'll hold on to some of these and see that the rest go to the right people (if you saw something you need, let me know).  I'll also probably keep that set of '91 Upper Deck in the binder.  I really dig the effect.

Thanks again for the cards, Dr. Dan!  I owe you something cool.
Posted by The Junior Junkie at 11:36 AM