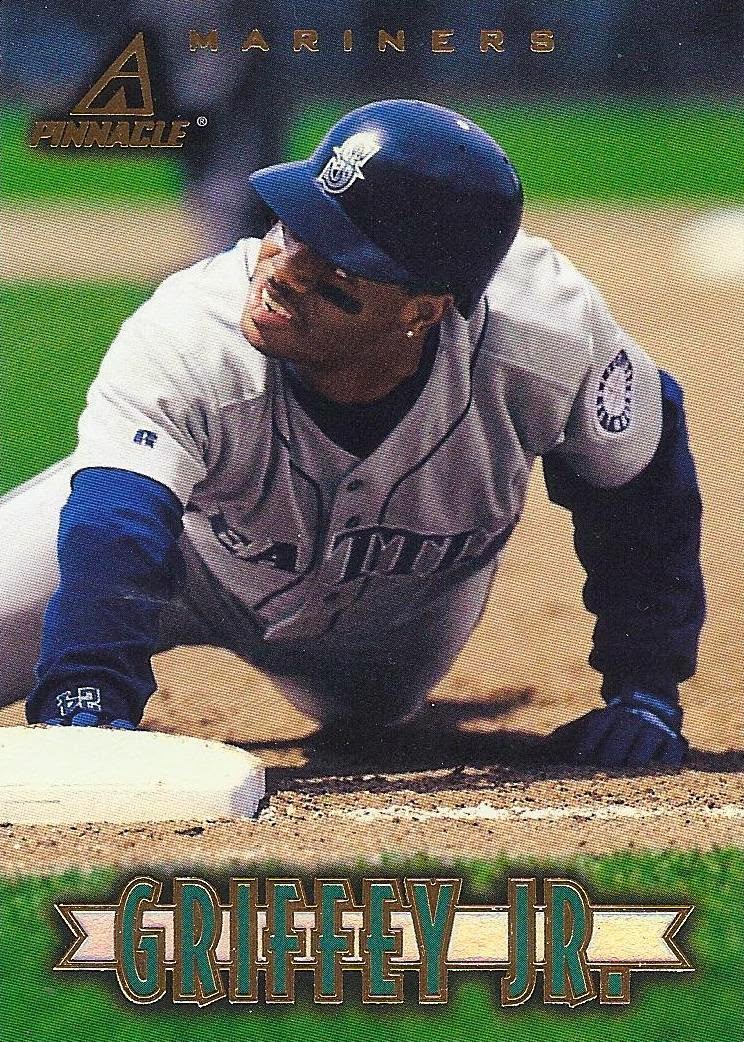 Is this a good Griffey card?  Yes.  The first and last Griffey base card of New Pinnacle and an attractive card #1.

The set: Something drastic happened at the Pinnacle offices in early 1997, and the specifics remain a mystery to this day.  I can only guess at the circumstances, but I would love to have been a fly on the wall the day the idea for this set was conceived.

I’ve mentioned before (a few times) that in 1997 Pinnacle cancelled the release of their flagship set’s Series 2 and instead created this “New Pinnacle” job.  What on Earth could have caused such an upheaval?  Soft sales?  The ugly factor?  Was there some aspect of the design that caused a legal or copyright problem?  Was it too similar to something else that could result in Pinnacle getting sued or ordered to cease and desist?

Barring that last thing it would seem to me that it’s less trouble to press on with the ugly design and start fresh next year, but they didn’t.  Why?  Unappealing as the base design was, it’s not like it was offensive; and the parallels and inserts were top-notch.  Again, why, Pinnacle?  Someone out there knows what happened, and they’re not talking.

Anyhoo, Pinnacle dropped the bottom-mounted border and reliance on gold foil of the previous two years (and one current one), opting instead for a simple but bold nameplate and a true full-bleed layout.  There is holofoil on every base card now embedded in the little banner behind the player surname which is in team color with an attractive foil border.  The team name appears tastefully at the top beside the Pinnacle logo.

In all New Pinnacle is not a bad-looking set, but it’s also not enough of an improvement to merit cancelling a series.

Two more facts about this brand before we delve into the Griffeys: First, New Pinnacle is a one-and-done brand, so this post comprises its entire design timeline.  Second, one aspect of New Pinnacle that has stuck around to this day is the inclusion of 1/1 printing plates in packs.  I don’t have any to show you, but we’ve all seen printing plates at this point, right?  They probably look like that. 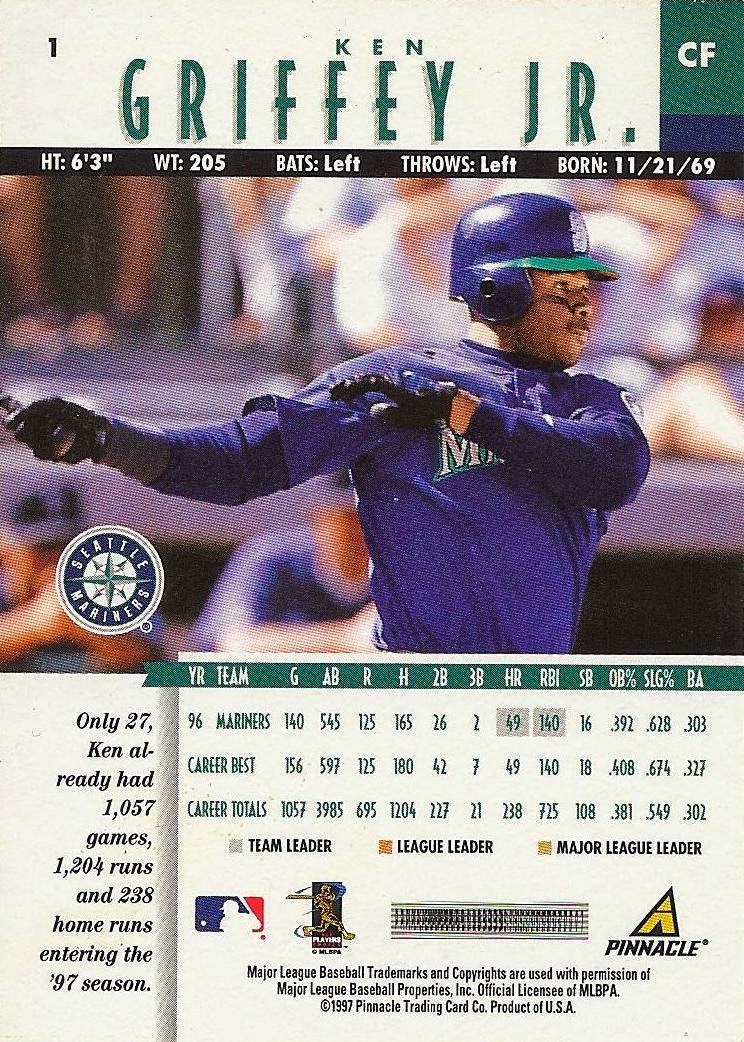 This is a rare shot of Junior on the base paths probably jumping back to first after a check throw from the pitcher.  The real appeal of this card is that it is framed perfectly around the picture with the horizontal strip of grass just the right size to accommodate the nameplate.  It’s also an excellent candid close-up.

Pinnacle did a pretty good job on the back, too, opting to include a large picture of Junior in mid-swing.  They cut down on stats, showing just the previous season, career bests, and career totals.  If you’re not going to show full career stats, these are the big three I want to see on a card back.  No need to re-invent the wheel just to fit a picture.  Zero complaints. 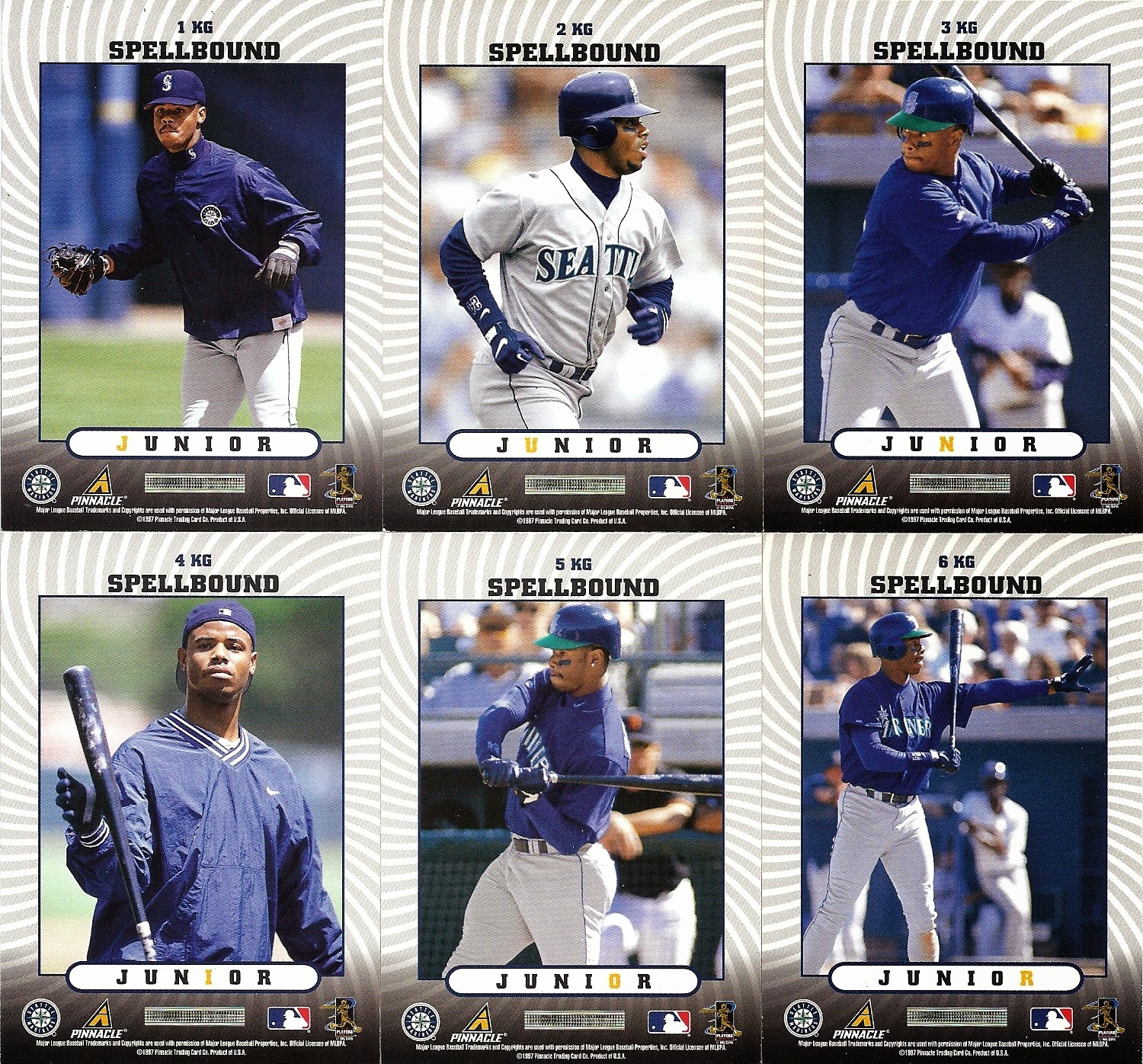 One of the big treats of the New Pinnacle brand in my opinion was the Spellbound insert.  It was enough of a hit that Pinnacle brought it back for their final flagship set in 1998.

This insert featured multiple cards for each player which spelled out each guy’s name.  Frank Thomas got FRANK, Cal Ripken got RIPKEN, and so on.  Griffey and Ivan Rodriguez are special because they each got nicknames in lieu of first or last names (I-Rod got PUDGE).

The letters are ringed in gold foil with a great spiraling effect in the background.  The photos appear inside each letter which is large and centered (this was not the case for the ‘98 design).  The card backs are free of frills: just a large picture with the insert name and the letter of the card indicated in yellow.

It took me months of looking to finally assemble this insert set at a reasonable price.  The most difficult card to find by far was the “J” which finally popped up on COMC just a few weeks ago for around three bucks.  I happened to be searching Griffeys at the exact right moment - it was the first “Recently Added” Griffey listed at the time I landed it.

Here are the Griffeys I am missing from 1997 New Pinnacle as of this post.

I’m not aware of any other brand that has ever taken a Mulligan on their flagship set.  It seems like an extreme move to this day.  They do it in the movies all the time such as with The Incredible Hulk, Spiderman, Batman, and most recently Godzilla.  They call it a reboot, but we all know it’s a do-over.  At least in those cases we can attribute the failure of the original to something specific like a bad choice in director, Spiderman 3, Batman & Robin, and Matthew Broderick.

So, what is the Matthew Broderick of 1997 Pinnacle?  The world may never know.

The post is over, but please enjoy these bonus high-res scans of the Spellbound set if you find it hard letting go: 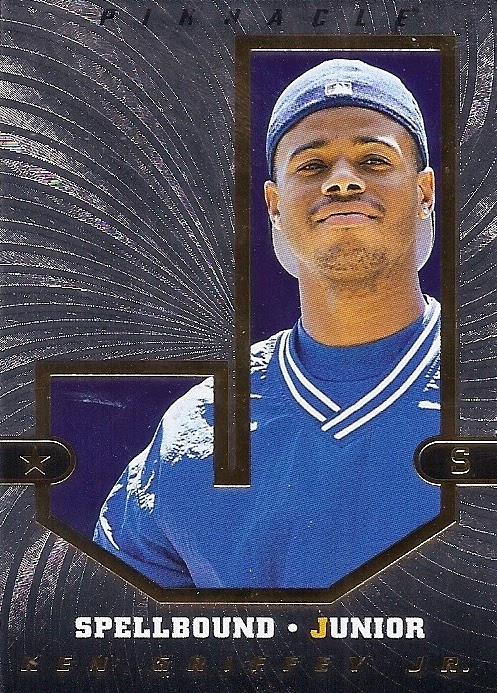 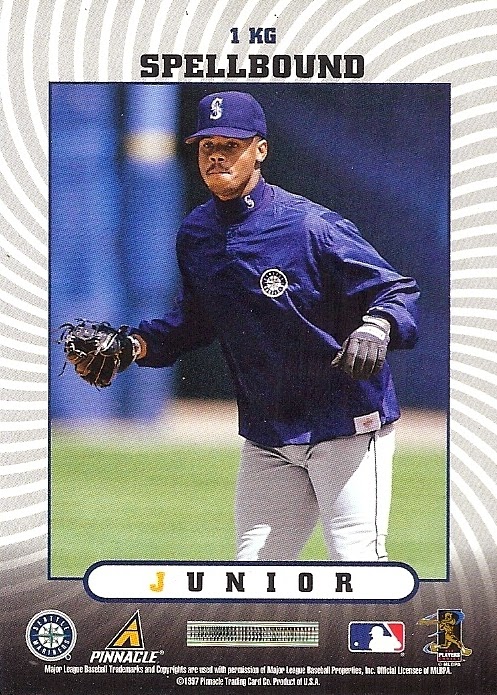 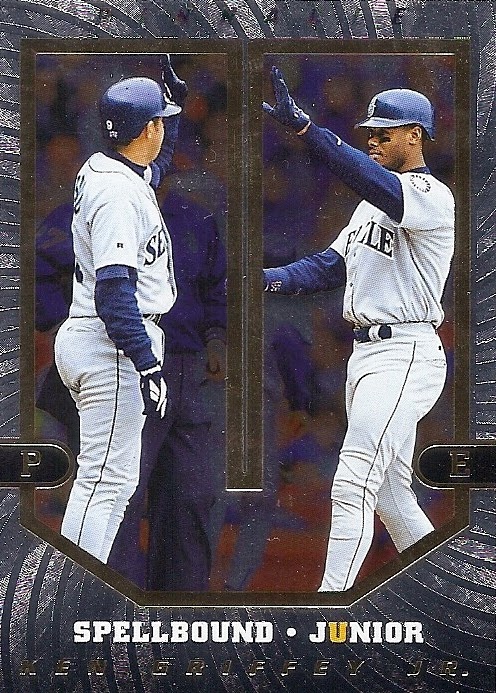 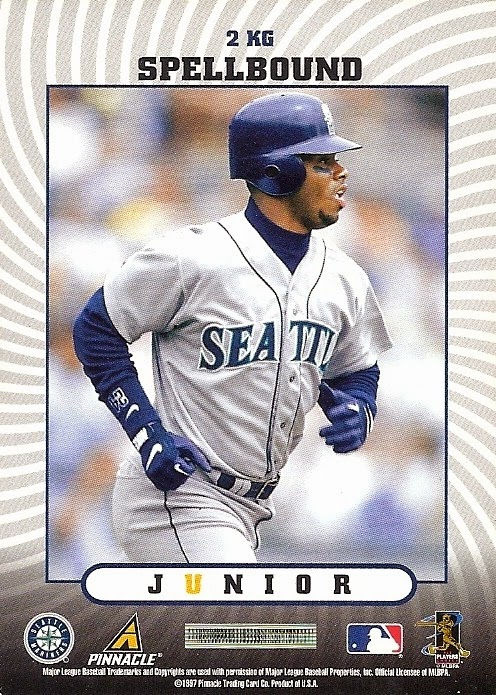 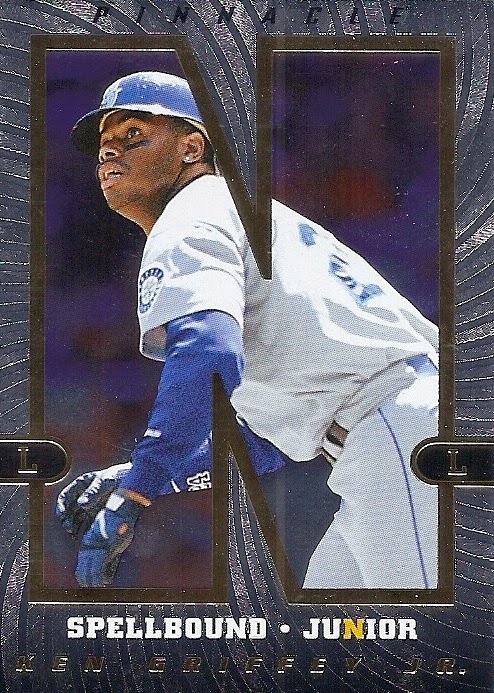 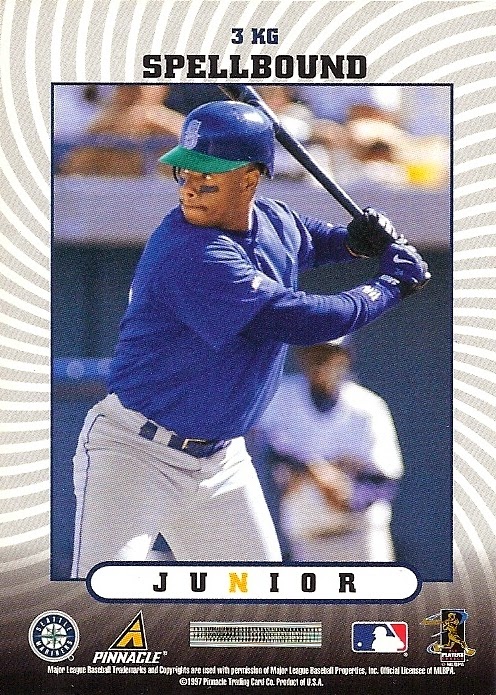 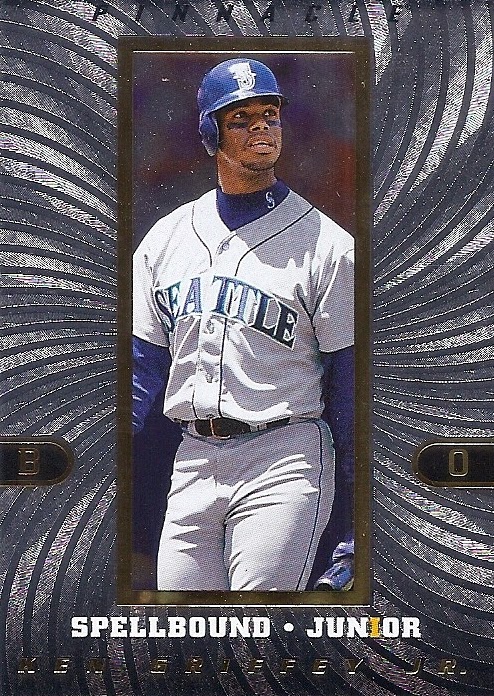 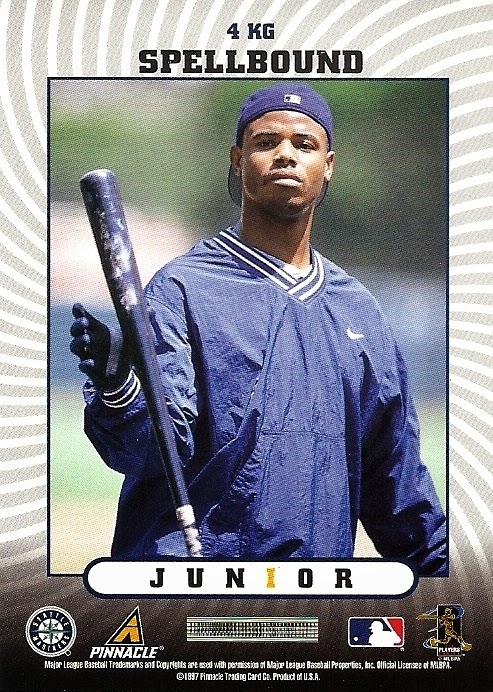 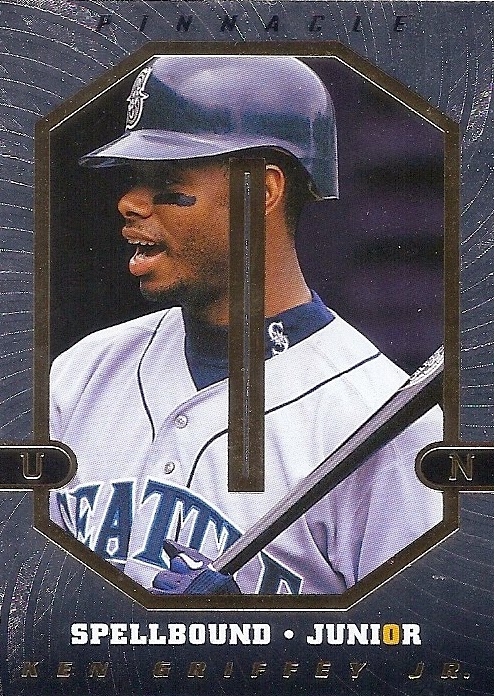 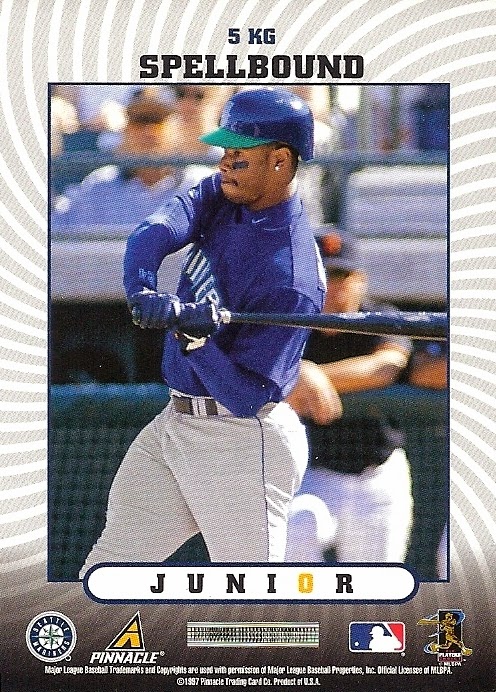 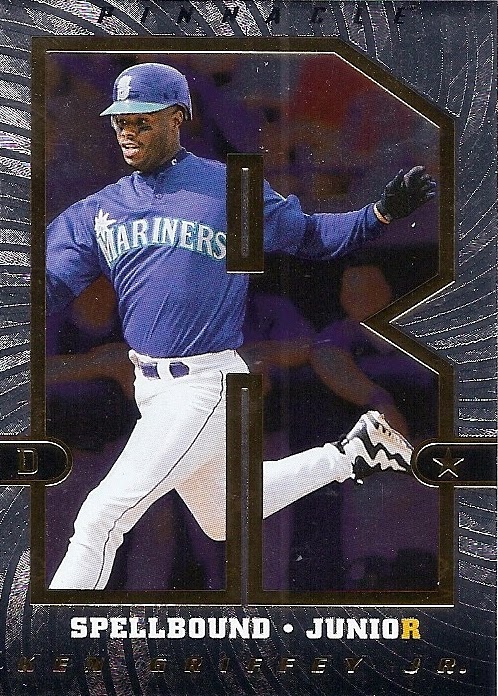 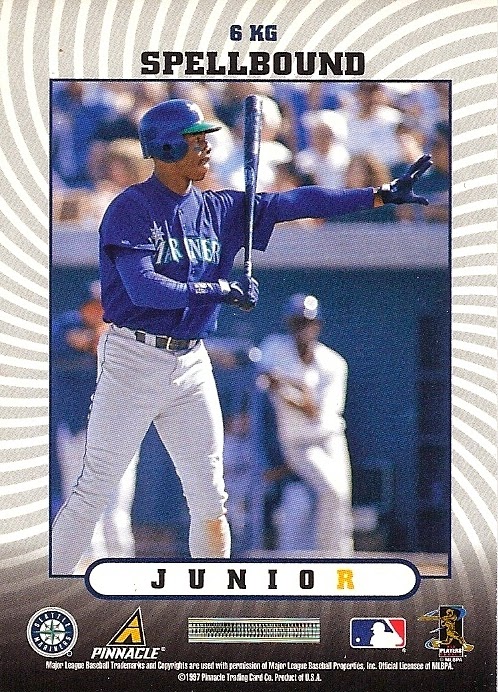 Posted by The Junior Junkie at 6:48 PM