I’m pretty sure I already did one of these in 2016, but here is another because CONTEST!

My card cave is more of an everything cave. I collect a lot of different things, so in addition to being a closet/storage room, this is my media room, computer center, office, poster repository, memorabilia emporium, and, of course, card cave. Most importantly it is my nerd sanctuary. 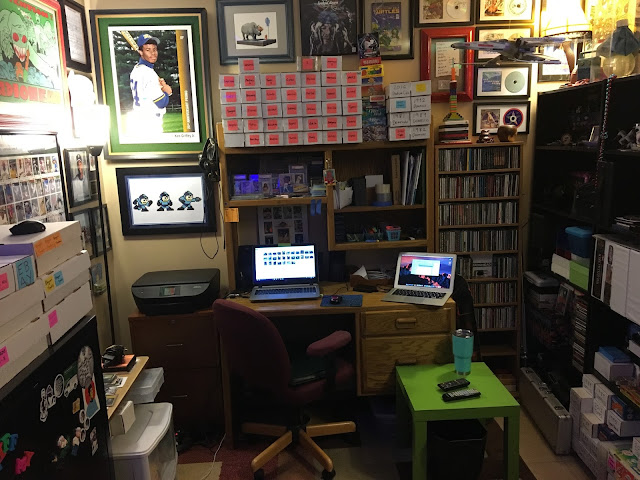 This is my desk, where the magic happens. I'm in the middle of making the switch from PC to Mac, so I'm doing a lot of data consolidation and transfer. It's taking a long time (and eating into my card collecting time and budget), so I'm making this post while waiting for transfers to finish. 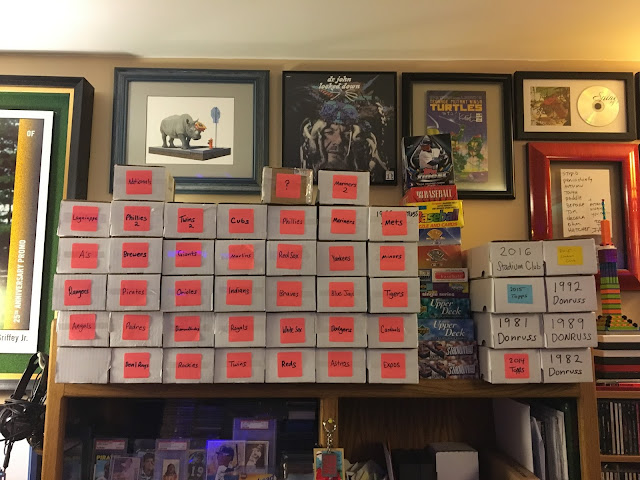 Above the desk is cardboard storage. The orange-labeled longboxes are trade fodder separated by team. 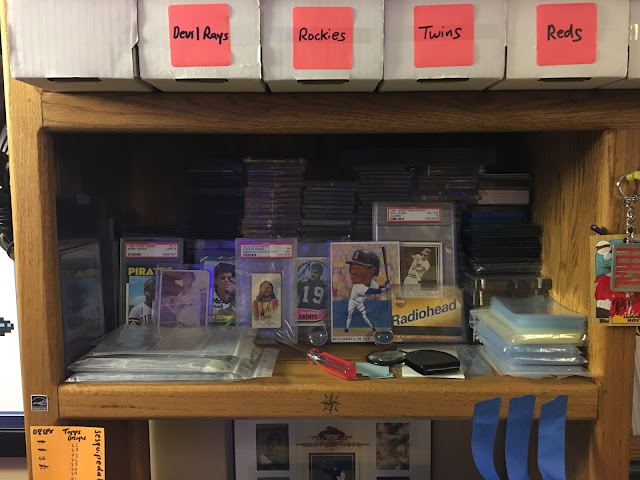 Below that is my storage media shelf with a few display cards to boot. The Bonds rookie is there because I have no idea where to put it. 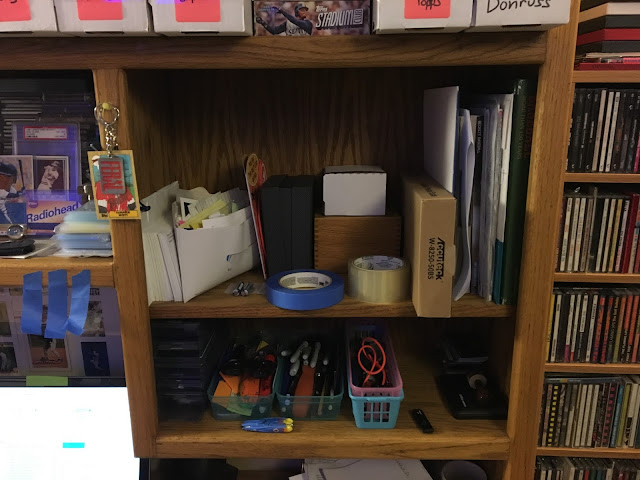 Beside that is everything else I need for blogging, trading, and collecting in general. Highlights are a postal scale, my original 1996 Beckett Griffey Tribute magazine for checking off new additions, and an envelope containing every note everyone has ever included with a trade package. I'm kind of an orderly hoarder. 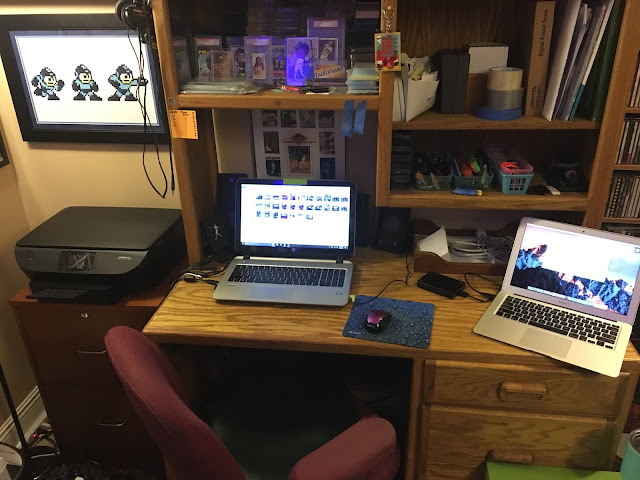 I’m in here a lot because as you can see this is where the computer is. The reason I stick with laptops now is obvious if you’ve ever had to evacuate you home with a desktop computer. That computer is a media server streaming 1.5 terabytes of content to the rest of the house. 600GB of that is BBC, PBS, and National Geographic nature documentaries. 147GB is just Mystery Science Theater 3000.

Soon the Mac will be where the PC is, and the PC will be only a download machine and media server. I may use it from time to time for burning CD's and such, but the end goal is to be mostly Mac by Mardi Gras (which is at the end of February!). 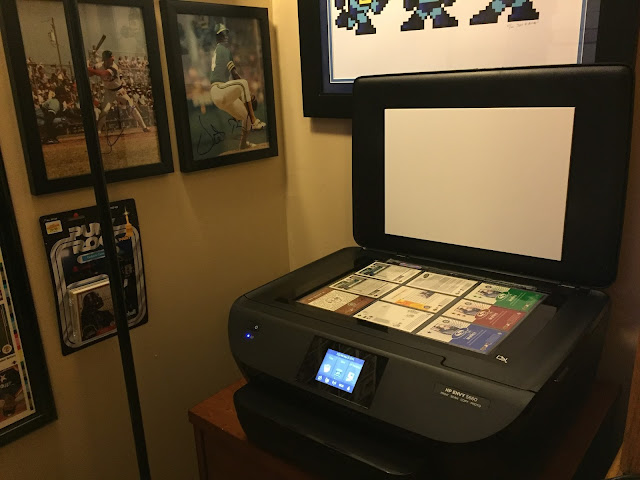 Here is my scanner, which is relatively new as my old one had simply had enough of my wife fiddling with it. This one is totally wireless, but nearly every scan comes out crooked, so it's a trade-off. 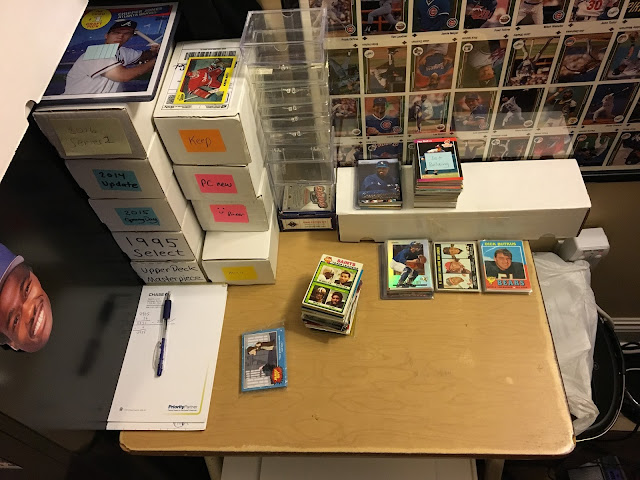 To the left of the desk is this little old-school (a term I’ve never gotten to use literally until now) desk that never doesn’t have cardboard on it. Here you can see I have some new PC adds, a new silly names (mostly Dicks), a stack of Richie Allen cards, and some boxes I use in my sorting. This small desk is my main sorting area, and the cubby beneath is ideal for storing small card boxes. Harold Reynolds’ head supervises from his suction cup. 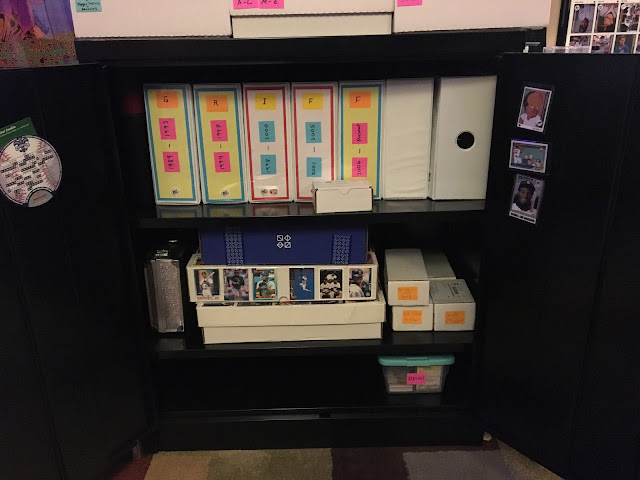 The card cabinet is the heart and soul of the card cave. It contains the better part of my Griffey card collection minus anything worth more than a few bucks. The real stuff (a solid quarter of my collection) resides in a big safe deposit box at the bank in longboxes sealed in large air and watertight bags with desiccant packs. The Griffeys are arranged by year and brand in binders. Below that are my Griffey duplicates, off-size Griffeys, and non-Griffey keepers. No one card in this cabinet is worth more than ten bucks at most. Because I run a public blog about my Griffey collection, I’m very careful about what cards I keep at home. 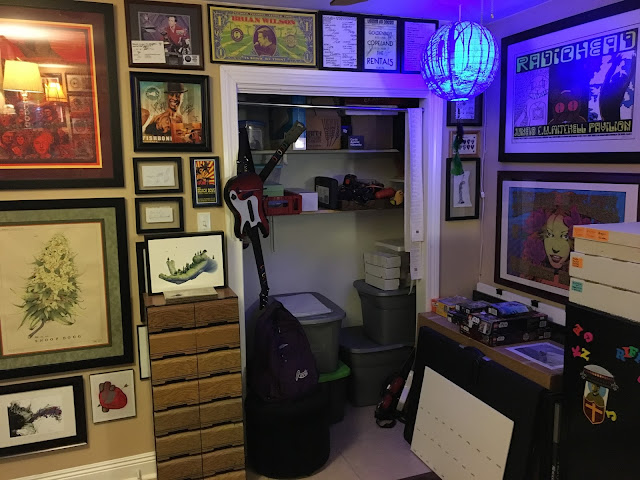 Next door to that is my next biggest collection: posters and prints. I have roughly 500 posters, some framed, most not. Those unframed prints live in these large boxes or giant portfolios. Poster collecting is not a great hobby to have if you don’t have a lot of space or if you like money. One of my favorite artists, Daniel Danger, made that blue paper lamp. I don’t have proof, but I think I have the largest Daniel Danger collection in Louisiana.

When I converted this room from a guest bedroom to my nerd sanctuary I removed the closet doors completely and added a storage shelf. There’s very little fun stuff in here – it is mostly storage with a few surprises hidden here and there. Above the closet are a few signed setlists from They Might Be Giants, The Rentals, Galactic, and an autographed gig poster for one of my musical heroes, Brian Wilson (who I'm seeing in March!). 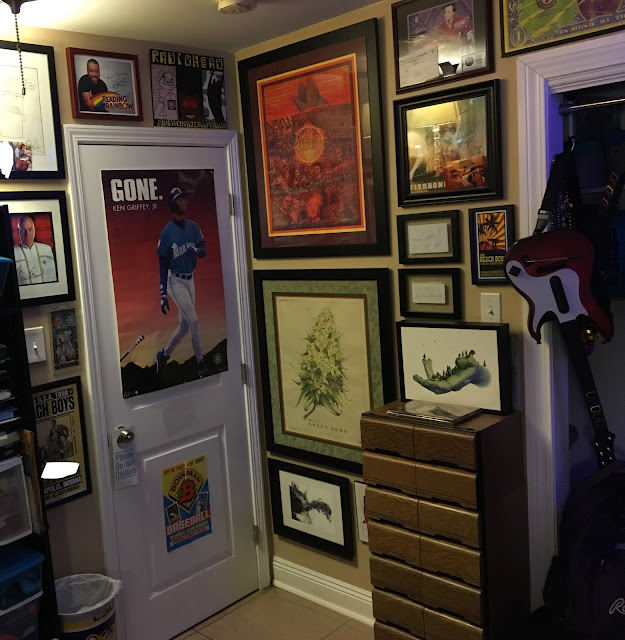 Left of that is one of my favorite walls in the house. It’s got my Jeff Soto Dune Poster, my Snoop Dogg on hemp paper, and a bunch of different autographs from various Saints as well as jazz legend Herbie Hancock. I drew over a few items here because there are some things YOU CANNOT SEE. 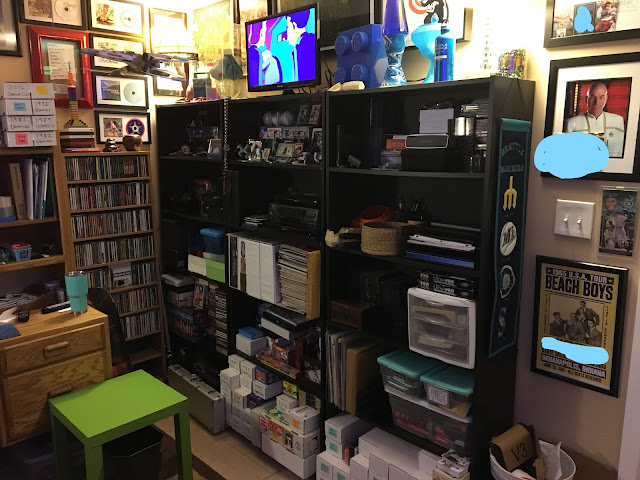 The bookshelves are where I keep all my go-to collection stuff and display items. 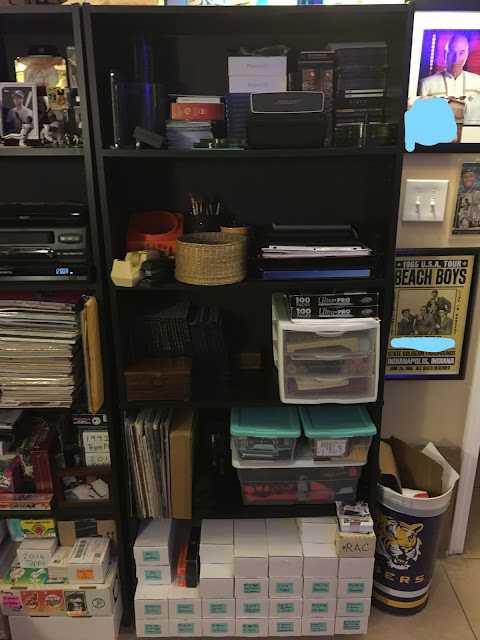 The middle shelf is the not-very-valuable part of my coin collection which I hope to get my son to help me curate when he gets old enough to not eat the pennies. Below that is where I keep my "collector" vinyl, that being the stuff that doesn't get played because it's worth actual money. 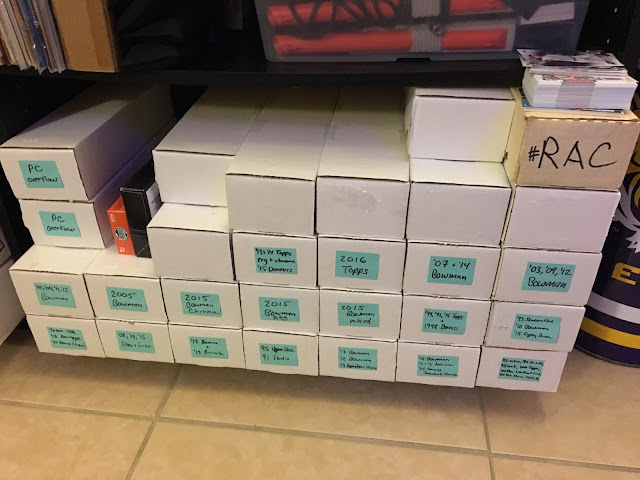 This shelf may interest my specific audience more. Its where I keep large quantities of cards I don't intend on keeping, all broken down by set. If shipping was cheaper, none of these cards would be here. You'd probably have some of them right now. 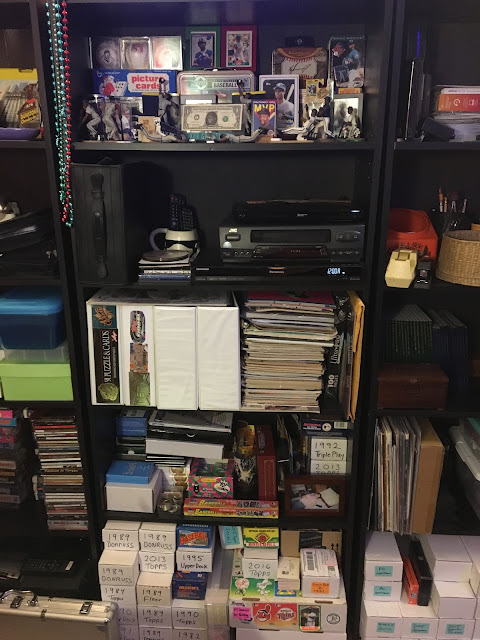 This middle bookshelf is 80% baseball cards. We have the Griffey collectibles shelf up top followed by my media shelf (hooked up to the TV up top) complete with a VCR hooked up to a DVDR for VHS-dubbing. Under that are my Griffey magazines and a bunch of complete sets in binders, then a lot of miscellaneous baseball card stuff, and at the bottom a whole bunch of complete sets and my '89 Donruss boxes. 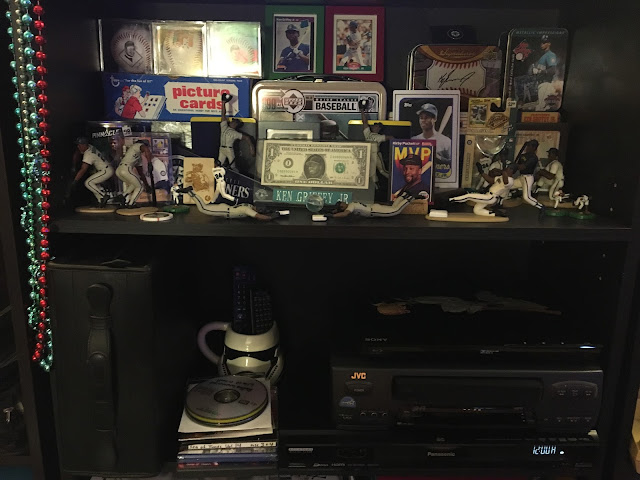 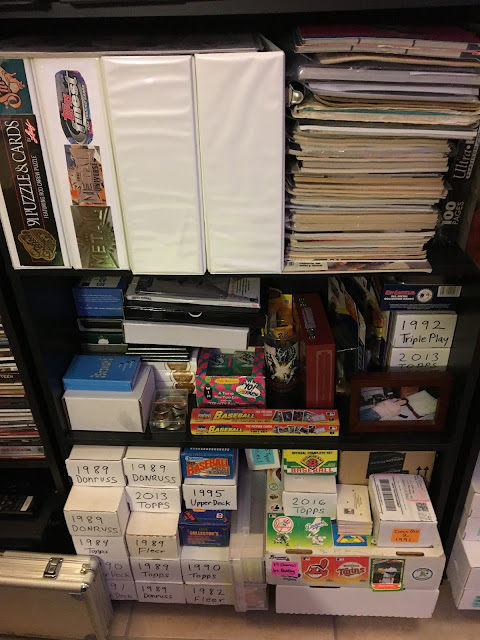 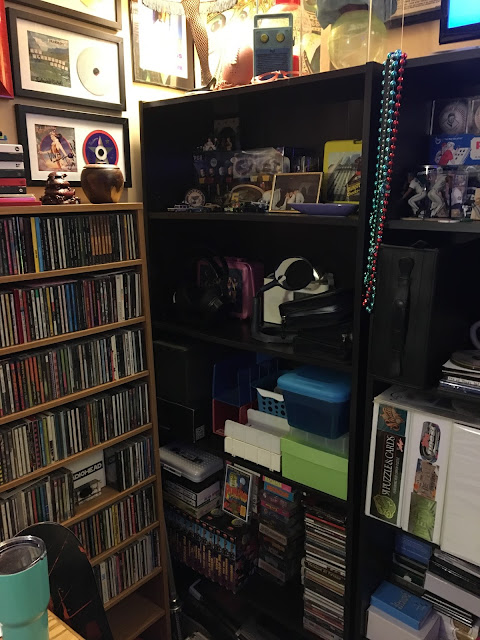 These shelves used to be completely full of DVDs, but I recently completed a project where I sorted most of the discs into disc binders and put all the DVD cases into a giant storage bin in the attic. I have not yet decided what to do with the newfound shelf space, but the whole space is less cluttered already.

On top of this bookshelf is my MST3K prop collection, the original Sports Illustrated football phone, and my Christmas Story leg lamp. One entire shelf of that CD collection on the left is Radiohead. Another is They Might Be Giants. I am a big nerd.

So, this was my card cave at its best. I write that in the past tense because if we ever have another kid (and we plan to someday), this will become my son's room, and I'll have to find a place for all this crap. God help me.
Posted by The Junior Junkie at 10:33 PM