1997 Pinnacle Inside: Get Thee to a Cannery


Pinnacle in 1997 was all about that metallic quirk. You had X-Press with their crazy Metal Works ingots, Mint with its coins including redemptions for legit solid gold coins, and Inside – the first cards to be sold in a can.

Cans – the cards came in cans, guys. They were ten cards per can, 24 cans per case. You literally needed a can opener to get at them. The wisest of us opened the cans from the bottom so we could display the cans on our bedroom shelves between the collection of empty beer bottles and the Yasmine Bleeth poster. I assume we all had pretty much the same setup in 1997, right?

I’m kind of shocked this product got made in the first place. Consider the size of a pack vs. a can, then consider the shipping and storage implications of this product. One 24-can case was a little larger than an 8-box CASE of standard product, and for the same price per pack. And it’s not like the cans protected the product against damage very well – the cards came in cellophane packs that rattled around inside the cans and damaged the edges, especially on those cards on the top and bottom of the pack. Oh, and on top of everything Pinnacle had to provide a can opener to every hobby shop that ordered a case. It’s cliché to ask “what were they thinking?” about stupid ideas like this one (especially when you love Pinnacle as much as I do), but it’s hard not to here.

Speaking of can opener, Pinnacle provided a promotional kit to hobby shops that included a Ryan Klesko Sample can, card, and an official Pinnacle can opener. 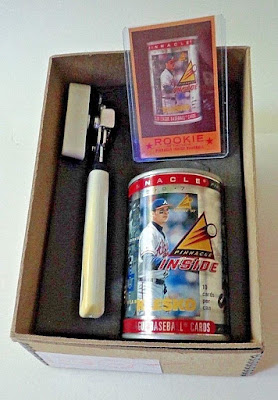 
It’s not a bad-looking card, but there’s nothing especially memorable or unique about it, either. It’s designed around that left-justified split not unlike 1994 Upper Deck, but with team-shading in the inset and bits of text floating around within. Highlights are the giant gold foil name plate, and that Pinnacle logo with the baseball comet flying through it that I’ve never seen anywhere else. 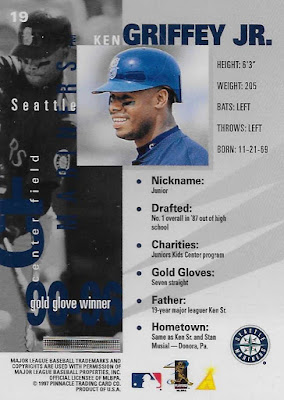 The back is another story. It’s got that same inset as on the front, only expanded with an added bit about Junior’s Gold Glove streak. The weirdest part is not the total lack of a stat box, but the odd factoid section in its place. The factoid categories are different for each player, depending on what interesting things Pinnacle found to mention about them. For example, Cal Ripken, Jr. also has a “Father” category, but no “Charities” category. Instead, Ripken has a “Highlight” category (breaking Gehrig’s record) and a “Hobby” category (basketball). A little “inside” information, I guess.


The Club parallel is a shiny version of the regular base card, and at 1:7 packs cans, it wasn’t all that rare. You can almost certainly tell from the scan what this card is made of: the dreaded unscannable papery foil. Pinnacle was also kind enough to fill you in on the card back with what parallel you had pulled, something we started seeing a lot more of in the late 90’s. 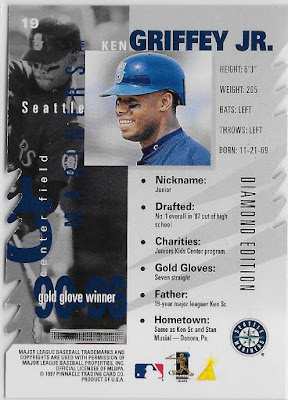 Believe it or not, you are looking at one of the toughest gets among all ‘90’s parallels – scarcer even than the refractoriest of Finest refractors that came before it. It is an unsung Holy Grail among not just Griffey collectors, but also player collectors of any guy in the Pinnacle Inside checklist.

This 1:63 die-cut parallel fell roughly one in every two-and-a-half 24-can cases. There is no way to know for sure how many of these there are for each player, but you know I like to guess.

If the same number of cans of Pinnacle Inside were made as the number of packs of Pinnacle Mint, about 1,398,000, there are approximately 140 Diamond Edition cards for each card in the base set. That's pretty low, generally speaking, but I am pretty certain this number is actually too high.

First, in addition to these cans being difficult to find even when they were available, the product itself was not terribly popular, and it took up a lot of space. All that added up to a lot of it being recalled and destroyed, including hundreds of Diamond Edition cards that never saw the light of day. In addition to that, the nature of the product, all big and bulky and difficult to store, suggest to me that Pinnacle didn’t produce as much of this product as a nice, compact product like…well, any other product not sold in cans, including Pinnacle Mint. Finally, the best indicator of how scarce these are is market price, and the prices these command when they do come up are RIDICULOUS.

I’ll put it this way: I’ve seen five times as many #/25 Red Crusade Griffeys sell as I have this parallel. If you don’t know about the Red Crusade, you can get a whiff of just how scarce those things are here.

In fact, the only specimen of the Griffey I’ve ever come across is the one you’re looking at, and it remains one of my eBay saved searches to this day out of pure curiosity.

So this card is a white whale, but it has all the makings of what I call a “quest card,” that being a very rare card that isn’t generally desirable except to niche collectors. It’s not exactly a Finest refractor or an E-X Essential Credentials, both far more popular 90’s parallels. In fact, most collectors probably haven’t even heard of it. The only reason this one is a white whale and not a quest card is that it’s a Griffey and he is not a niche PC guy – he’s an extremely popular one. For those niche PC guys it’s not terribly expensive – just hard to pin down. Very hard.

A good example is a guy I’ve seen on multiple card forums who is a Brett Butler supercollector. Last I saw he is less than ten cards short of 100% completion for all Brett Butler cards ever produced. One of those last few cards is this Diamond Edition parallel. When it does come up for sale, you better believe that this guy will not let this one get away. For him, this is a true quest card.

So to all the player collectors out there who focus on one off-the-beaten-path '90's guy, I suggest you focus on that guy's Diamond Collection card first and worry about the piece-of-cake 90's Finest refractors later.

Moving on, insert-wise I’d like to have seen Pinnacle take this can thing to another level, maybe with some Andy Warhol-inspired soup can art but in team colors. Or a rookie insert called “Can-Do!” Or a pitcher-only insert called “Canned Heat.” Something punny and kind of stupid, ya know? I like that stuff. Instead we got a handful of inserts that are woefully devoid of can humor. I consider it a missed opportunity. Pacific would have gotten it right – they had zero shame with the dad jokes. 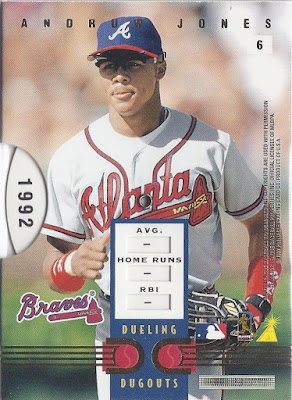 The closest Pinnacle would come to a can reference is this card which has a circular stat element you could use to compare the players on either side. It gives little insight into the matchup apart from what you can glean from the stats, but it’s a pretty neat concept, and the cards themselves seem to hold their value more than most 1:23 inserts from that time.

Pro tip: that rivet in the center of the ring makes this card a major liability in terms of card-stacking. As in this card could dent the living daylights out of any card you stack beside it. At least a top-loader, please. 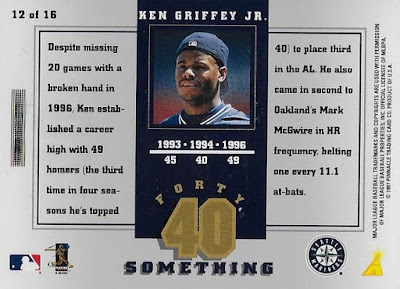 A who’s who of ‘90’s power hitters, this insert focuses on current players who hit more than 40 home runs in a season, even if it was only once.

You know my feelings toward papery foil, but I’ve got to say I love this card. The design is balanced and classy with just the right amount of shiny gold to offset the abundant silver and team-colored shading. The back is pretty much perfect with a great backwards-cap portrait, and it's a very rare example of a vertical card front with a horizontal back. A good-looking card all around, and a favorite from both years of 1997 Pinnacle Inside.

You heard that right: BOTH years – Inside would go for one more year before Pinnacle would go under and the concept of the card in a can would (almost - thanks, Upper Deck) disappear from the market forever. Probably for the best.

I have all the Griffeys of 1997 Pinnacle Inside except the actual can. The one pictured above belongs to fellow collector Nicholas. So, here is my very short list of needs from this set:

I'm not in a rush, though, as yet another clunky, three-dimensional Griffey thing is the last thing I need to find a place to store right now.
Posted by The Junior Junkie at 4:32 PM