[Confession time: what you are about to read was written way back in June of 2018. Keep that in mind when I use words like “for the past 18 months” and “a few weeks ago.” I am slow on the blogging front, and I own that fact completely.] 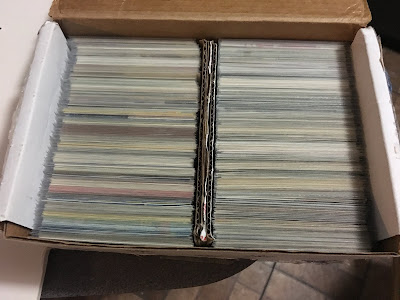 Remember this thing? Here's a link to the original post if you don't. Several members of the blogsphere have gotten a hold of this box and made posts about it. I’m happy to announce that the box has finally made it back home where it is being repaired, restocked, and rearranged for another trip around the country.
For the past 18 months I’ve watched this box zip back and forth across the U.S., bouncing from one collector to another, shedding Griffeys here, picking up new ones there. It’s been very exciting to see it continue for so long. Recently one of my Griffey buddies let me know he had finally gotten ahold of it, and I requested he send it on to me so I could take a closer look at just how much this box has changed in the last year and a half (and, you know, to take out some Griffeys).
I had some fun with the stats, too.
The box was started with 500 Griffeys. When I received it a few weeks ago, it had 529 Juniors, one Senior, a mini-poster, and a team sticker.


The box spent an average of 1.5 months in the possession of each collector. No fewer than 570 Griffeys were added to the box in its journeys, or roughly one Griffey every 28 miles.
The box has traveled over 13,868 miles (as the crow flies) in 541 days, which means it has been zipping around the country at an average speed of 1.06mph (the approximate speed of the unnamed evil from “It Follows.”) In that time the box added no fewer than 546 Griffeys to 13 collections which gives us a complete box turnover of a whopping 109%! That sounds great, but let’s be honest: I’m sure a few of the very same 1990 Donruss and 1991 Fleer cards I started the box with are still hanging out in there. 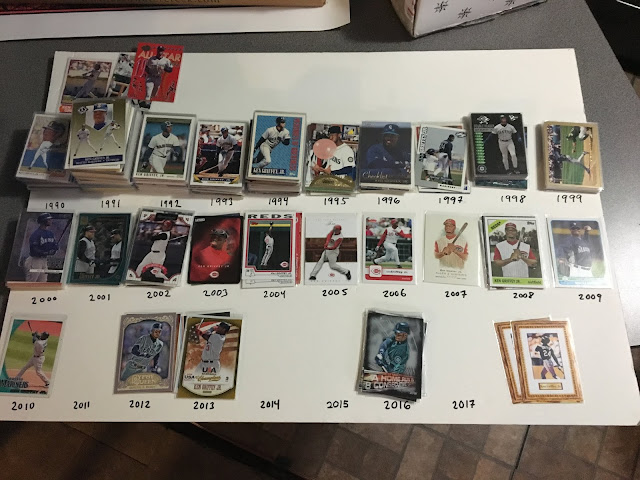 Far and away the most prolific set in the box is 1991 Score, the greatest junk wax set for Griffey collectors because of the numerous insert and subset appearances.

I tried to not change too much about the box spiritually speaking, but I did make some tweaks here and there. First, I moved the whole thing into a brand new box. The old one was getting rough and weighs more than twice what an empty version of the same exact box does because of all the tape and stickers. The corners are also getting awfully soft and the walls bendy. It was time for a new one. 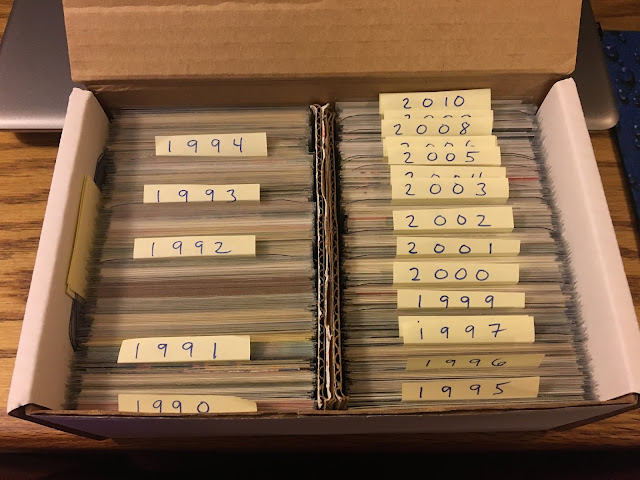 Something I was pleasantly surprised by is that the organization of the box was even better than it was when I first sent it out into the world. Someone had even arranged the cards by year and made paper separators to keep them organized. I took this a step further by creating more permanent plastic separators.

When I received the box there were some pretty nice cards in it, including some sweet customs (you can guess who made those) and a pretty valuable #/500 ‘90’s insert. Some generous folks had handled this thing. Some of the better cards were sealed in thick one-touch cases and top loaders. I re-did all these by confiscating the one-touch cases (they’re just too big for this little box!) and transferring all the cards into the classic penny sleeve/top loader combo and putting those into team bags so they don’t slip out or rattle around in the box too much in transit.

I will mention that there were way too many duplicates in the box and some room needed to be made, so I imposed a hard limit of three (does not include parallels or customizations) copies of each card. This limit is not really enforceable once it is out in the world again, but I think it’s a reasonable suggestion. I removed all instances of any card of which there more than three copies, removing about 73 cards from the total (apart from the ones I took). I then replaced those with other Griffeys that were underrepresented with a focus on post-2000 Reds cards (more than half the box was cards from 1990-1994!). It’s a lot more evenly-distributed now. 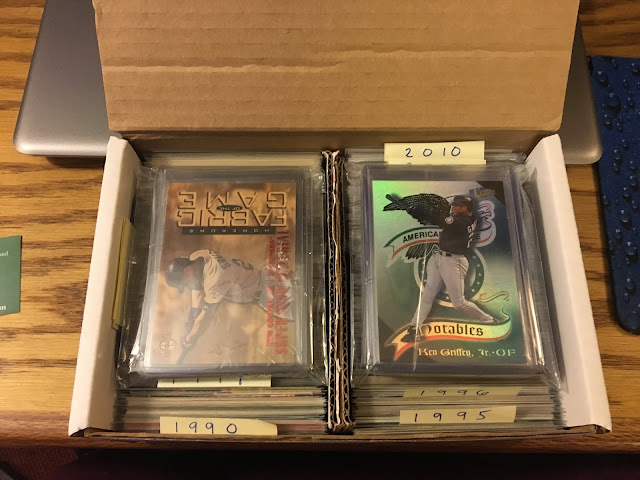 I’m about to mail this thing out again, and I’ve just gotta say how pleased I am with the results. Here’s to another 18 months of Griffey generosity! And for the next guy who gets a crack at it, that #/500 ‘90’s insert is still in there. Have at it. 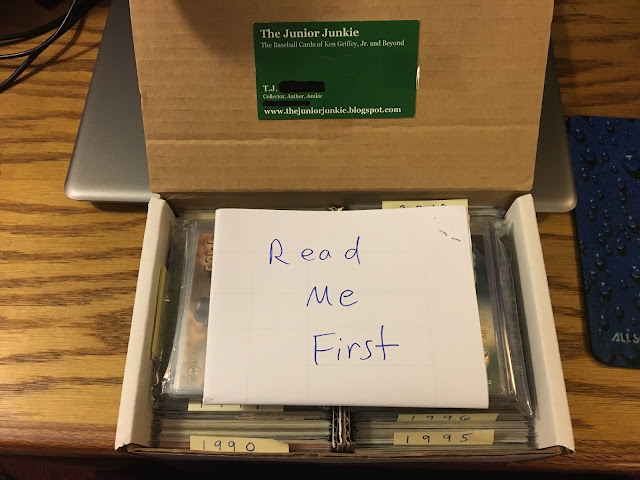 Also, I'm working on making it so the words DON'T look like that. I blame the Mac.
Posted by The Junior Junkie at 10:24 PM