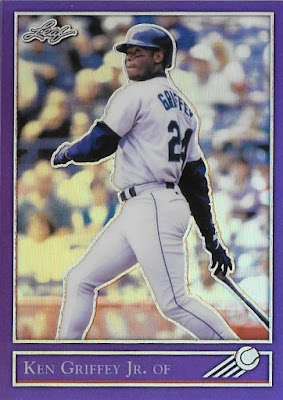 So 1990 Leaf is awesome – everybody knows it. A simple but attractive design, some quality rookie cards, and everyone’s favorite Big Hurt rookie (or at least favorite one with his name printed on the front). And on top of all that there weren’t a whole lot printed, lending a certain mystique and desirability not often found in major sets of this era.

Leaf turned down the heat for the ’91 set by overproducing the living daylights out of it, but it’s not like the cards are awful or anything – they’re just plentiful. The same is true for 1992 Donruss. There’s a damn bajillion of them floating around so they exude cheapness and inspire resentment in collectors who, for the most part, want a certain amount of scarcity in their collectibles. Like if someone collected plumbuses. EVERYONE has a plumbus or two around the house. How’s that collector supposed to feel special? 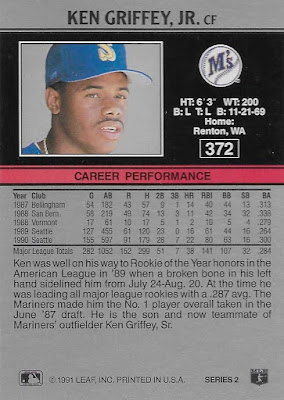 There is one damn Griffey in 1991 Leaf, and here it is. They embraced the hint of silver from the previous year and did up the whole border in it along with graduated corners that resemble those paper corners you see in photo albums. The uber-centered nature of this design makes miscut cards appear even miscuttier. Check this baby out: 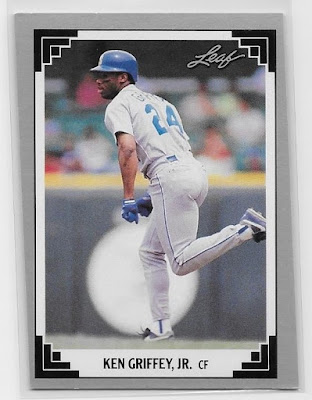 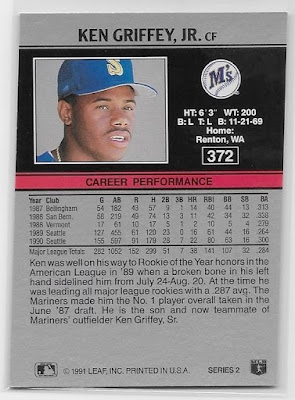 I shelled out 60 cents for this mamma-jamma just because of how laughably off-center it is. It is the Charlie Brown Christmas tree of my ’91 Leaf Griffey collection.

Hey, look at this thing: 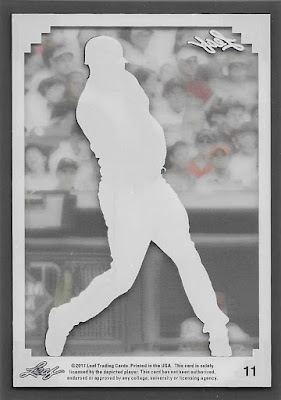 I’m just going to lump these reprints from 2017 in with the regular set here. Also, what if this set had thrown off the shackles of its silver predecessors and embraced color? 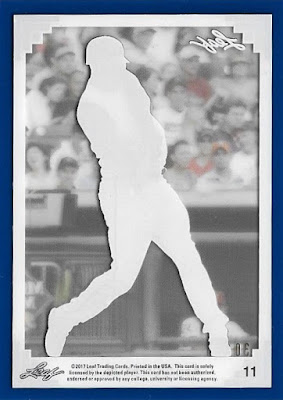 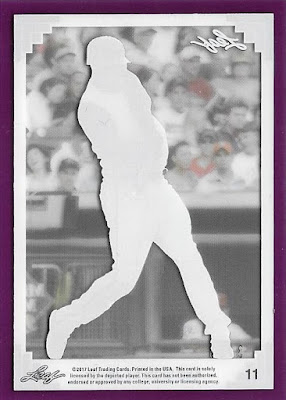 So smitten am I with reproductions of originally-overproduced cards that I just had to have these crazy colorways. They’re even kind of scarce.

Now that we’re on the subject, a little planned scarcity on Leaf’s part combined with a little more discretion in the photo selection could have helped this set a lot. Still, you don’t run into single-Griffey sets too often, so grab one of these on COMC for 38 cents or whatever they’re going for now and be done with it.

And be thankful Griffey didn’t make it into the preview set this year. The 1990 preview is prohibitively expensive these days. 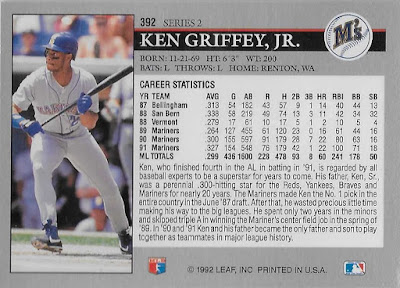 Welcome to the most boring Leaf ever got. I mean EVER. I’ve heard it argued that the universally-beloved 1990 set is boring, but NOPE. ’92 takes the cake. Just silver squares and Times New Roman font and that’s freakin’ it. They threw a rando red line in the nameplate for…well, I don’t actually know TBH. Try and squeeze a droplet of joy out of these things. I dare you. There was a time when this was my favorite of the first three “silver sets” of the Leaf timeline, but I guess the rampant overproduction has finally worn me down. 1990 for life.

This is also the last time we’d get the classic Leaf script logo which has returned with a vengeance in recent years. 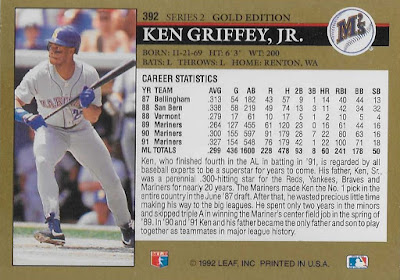 I feel like they could have put that design in just about any other color and they would have been more interesting. The gold foil helps, too. Not a bad parallel here. 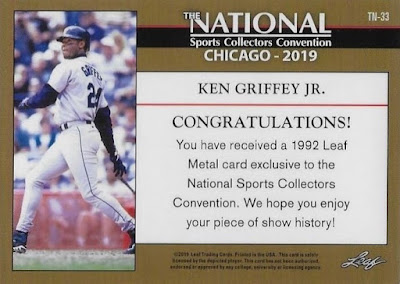 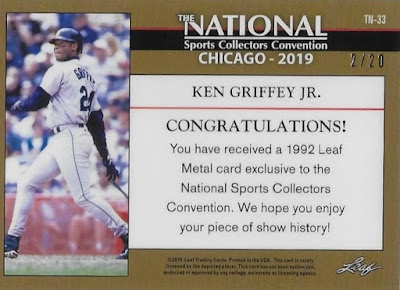 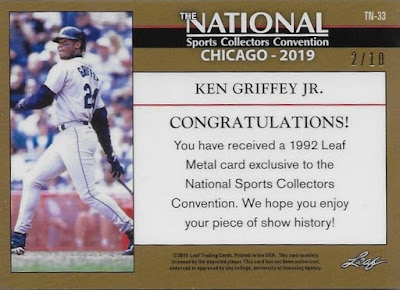 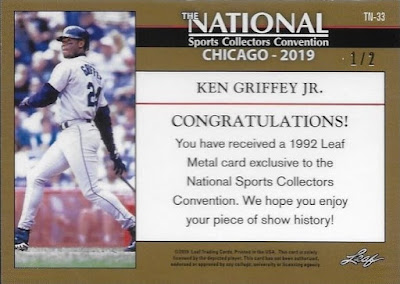 How easy was that?

By the way, I love when any brand does this. Shiny, refractive, multicolored re-imaginings of classic cards we're already intimately familiar with ('specially purple ones) are some of my favorite modern cards. I just cannot get enough of them. I even shelled out a pretty penny for that #/2 red because it is awesome. Gold star for Leaf. 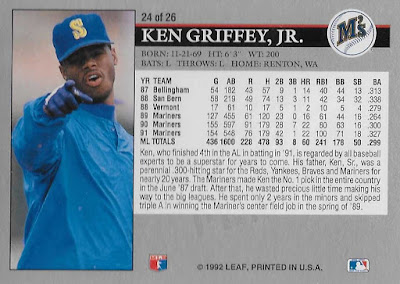 They skipped Junior in the previous year’s preview set, but he’s back for ’92. Also the previews this year were more plentiful than ever before (they were seeded in ’92 Donruss factory sets of which they probably produced like 900,000 – again the concept of planned scarcity was not yet in their playbook), so they’re not expensive. 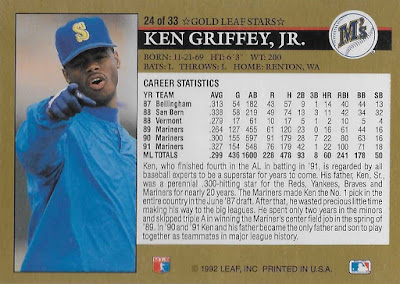 They even previewed the parallel. They were still exciting back then. Again, not expensive! Go get ‘em…

1991 and 1992 are complete (that's easy), but there is a pair of colorways I am still on the hunt for from last year's National set. There may or may not also be a 1/1 (I'd be surprised if there wasn't), but these are all the colors I can find references for online.

The same goes for the 2017 History of Baseball acetates in the 1991 design. I assume there are more, but what are they?

I do indeed like the 1990 set (everybody does, it seems), but I am not wild about the ’91 and ’92 sets (though I will always make exceptions for colored acetate and shiny refractive metal). I wouldn’t really care much for Leaf cards until the glitz and glamour of the glossy, befoiled ’93 set. And the ’95 set remains one of my favorite sets of cards to this day. Leaf did get better, and they've been rocking it just in the past few years as well. Overall I’m glad they managed to trudge through these two relatively forgettable years because Leaf turned out pretty darn good in the long-run.