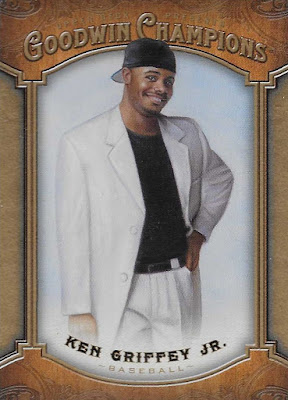 Somewhere far, far away from my wheelhouse lives 2014 Upper Deck whose hockey cards are second to none. You may be thinking what does a southern boy 500 miles from the nearest team know about hockey? And you’d be right – I do not know much. But I know cards, and being that I collect T.J. Oshie and St. Louis Blues cards, people do send hockey stuff to me periodically. There’s a little jab at my heart every time I flip through brand new SP and Upper Deck flagship cards with lovely, modern designs and wonder what kind of stuff they would be giving us if baseball was still, well, in the cards for them.

And yet I am pleased to report that they do still make Griffey cards. Good ones. GREAT ones, even. And somehow one of the best ever. 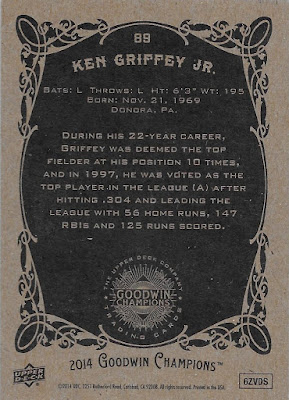 Not only does Griffey often get a spot in the Goodwin Champions checklist, but the photos used are always on-point. Of course they are often outside of the sphere of his chosen profession (baseball, if you weren’t aware), but they hint at other potential professions he might have excelled in. In the case of this card I am getting a Miami Beach real estate investor vibe. Look at this cat. I want to have lunch with him on the veranda. Maybe split a bottle of white wine. Mixed grill, a little salad, something with avocado – nothing too filling. I call this look “fresh and friendly.”

Still seems a little big, though. 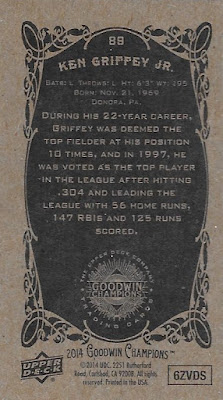 That’s better. Somehow they managed to fit a little bit more of the picture onto this card (probably the proportions), but otherwise they’re identical. Great print job on these.


Now is a good time to mention that Goodwin Champions is as close to a true set of tobacco cards as anything else out there. While many tobacco cards were built around baseball, most were all over the place with things like pole vaulters, boxers, animals, and flowers. Yeah, flowers. 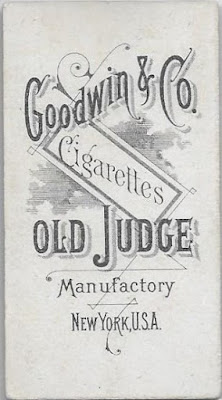 This is a genuine Goodwin tobacco card from 1890 – the real deal. I bought it for two reasons: 1) it deserves a spot in this post and 2) it is just a beautiful little relic. Check out the colorful, detailed printing and total lack of an athlete of any kind. Upper Deck took their direction for Goodwin Champions directly from sets like this one – athletes from every sport, famous Native American chiefs, historical figures, monsters, birds, fish – it’s just a big ol’ natural and cultural bouillabaisse. 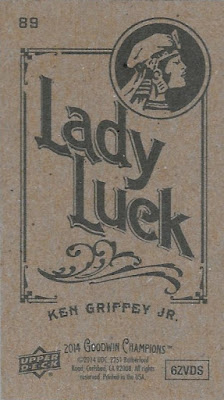 Hence the “Lady Luck” tobacco logo back seen on the green minis. The original Goodwin owned several tobacco brands including Gypsy Queen, but Upper Deck couldn’t use that for obvious reasons. 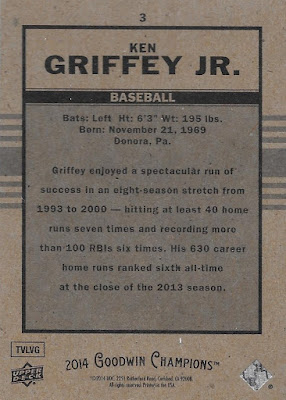 Goudey is an early 20th century bubble gum brand that has been emulated numerous times by the likes of Upper Deck, Topps, and Fleer in the few decades. Upper Deck even released it as its own standalone brand from 2007-2009. It lives on as an insert in Goodwin Champions to this day.


The design has changed a lot since the ‘30’s, so it’s really only a tribute to the original Goudey set in name, but you can’t argue with my squinty lil’ angel, J-Love. She could Party my, um,…of Five anytime.

The 2014 Griffeys got kind of a roaring twenties design vibe, and it’s a nice enough image of a young, logoless Griffey. The back gives us a decent summation of the Kid’s career, but for the most part it’s not terribly exciting, I feel like this card is more a box to be checked than a truly desirable card.

Overall Goodwin Champions is a lot of fun, and it would eventually become the first set to give us a card for Junior’s son Trey in 2017. When Junior does make an appearance in the base set it’s always a photo we otherwise never would have gotten to see: him playing golf, totally pulling off pastels. or closing on a three-bedroom fixer-upper in Key Biscayne. Damn his life looks fun. 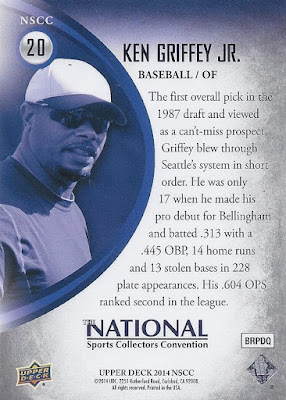 MLB license or no, Upper Deck always seems to have a sizeable presence at The National. Their 2014 giveaway set featured this card of Junior looking buck as hell (he must work out). Seriously look at the size of him – use that itty-bitty bat as a reference. Junior got huge, amiright? And I’m getting a Jamie Foxx vibe, too. This ain’t your daddy’s Griffey.

The VIP’s, on the other hand - they got your daddy’s Griffey: 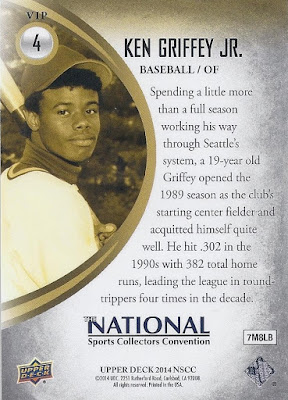 Ahhhh there’s our guy. It’s the same design as the regular National card but with a tinge of simulated gold and a VIP banner. This happened to be the year of Upper Deck’s 25th anniversary, and it all started with good ol’ card #1 back in ’89. It should be no surprise that we got several cards referencing one of the most famous baseball cards of all time. The photo here is obviously from the same session as the original 89UD#1 photo but with a lot more country background to take in. 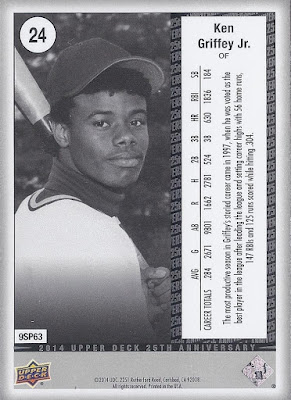 The set featured players from across the spectrum of sport, and being that the 25th anniversary is traditionally marked by silver, we got an ’89 Upper Deck tribute design in silvery greyscale as well as a silver-bordered parallel: 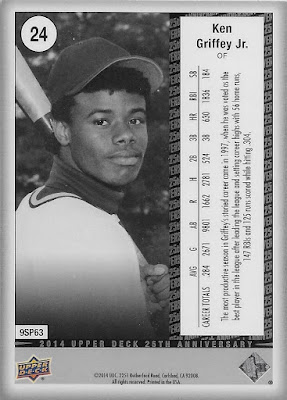 They opted to give Junior his heritage Mariners uniform number of 24 in lieu of #1 (James Harden got that honor for some reason), but we did get complete lifetime stats as well as the same alternate version of the famous fresh-faced rookie photo from 1989 UD #1. 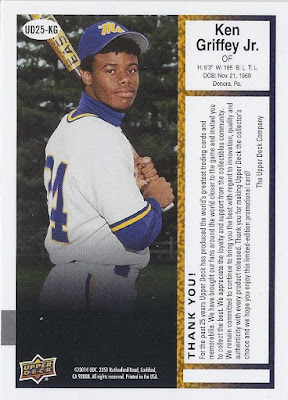 But my personal favorite image is the color version they used on their 2014 Industry Summit promo. Look at this young guy! There are ZERO FLAWS in this photo – the Easton bat most of us totally used in little league, the visible early #24, the gorgeous balance of colors, the flawless print quality. This is my favorite Industry Summit card in history, and I have an autographed 1/1 Industry Summit card.

One wonders if the print quality would hold up if the image was blown up oh, say, 800%?

If I really (I mean really) had to pick a desert island Griffey, it would be hard not to pick this one. I mean the Griffey/Mantle dual-auto is amazing, but this one can be used for shelter, kindling, a makeshift table, and I can only assume the frame I put it in would come along to the island, providing even more kindling, rudimentary tools, and glass that protects against UV rays. Not to mention part of that frame would make a decent enough shovel. The wire and mounts could make traps and fishing tackle. I mean there’s probably a dozen or so other uses I can’t even think of right now, but you get my point.


But the main difference among those of us not currently stranded on a desert island with only a baseball card is scarcity. There are 1000 of the Griffey/Mantle dual auto, but only 25 of the Industry Summit super jumbo. Also the dual auto could be pulled from a pack or pretty easily bought on the secondary market if you’ve got the money. The super jumbo had to be earned.

In 2015 I had the pleasure of receiving this “card” during Upper Deck’s “Random Acts of Kindness” program for prolifically posting my 1989 Upper Deck Griffey rookie as my #walletcard on Twitter and on the blogs. I got lots of shots of the card on a legit Mardi Gras float on Fat Tuesday here in New Orleans, a couple in front of the Aurora Borealis in the Yukon Territory of Canada, and even one with Mr. Belding from Saved by the Bell. There's a ton more you can check out here.

I’ve been slacking on that front recently, though. Oh, and my #walletcard looks like this now: 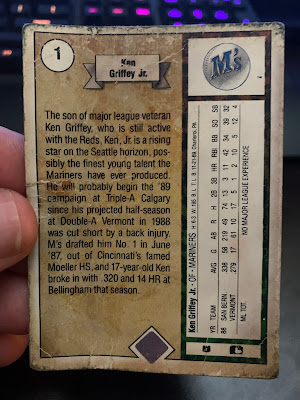 What kind of PSA grade should I expect? Seriously - I want guesses.

No top loader could hold that mega-card, so I opted to have it archivally framed, and there it remains to this day. You can read about that process here. 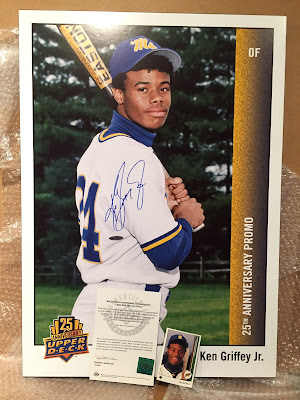 I acquired this monster Griffey the same year as I got a hold of the 1994 Upper Deck Griffey/Mantle Dual auto, one of the most legendary baseball cards of all time. And yet when I put together my Top Griffey Acquisitions of the year list for 2015, it was the 2014 super jumbo that landed at #1. I’ve also been mulling over a Top Griffey Acquisitions of the Decade list, and to this day there is still no other card that could take that top spot. We will check again when the decade actually ends on December 31st, 2020.

And in case you were wondering – yes, Magicpapa has it. But if you want one, someone is selling theirs on eBay right now for $5000. Better hurry.


Here are all the Griffeys I still need from 2014 Upper Deck:

I suppose I could sell the super jumbo and use the funds to buy the rest of the 2014 Upper Deck Griffeys, but also are ya nuts? If someone were to hold this one giant Griffey card hostage, I would trade every post-2000 Griffey card I have to get it back. Pre-2000….well, I’d have to think about it.

Quick note: One of my non-card-collecting buddies reads this blog (just because I write it – isn’t that sweet?), and remarked that I only write posts about sets for which I have some super-crazy-rare Griffey card or cards. My response to this was “Well, of course I do.” If I’m going to put together a post about the Griffeys from a certain set, the idea is to provide as much information about that set and those Griffeys as possible. There are numerous sets of cards that I would love to write about but can’t because I simply don’t have enough of the cards. I’m not saying I need to have EVERY GRIFFEY to make the post (it’s pretty rare that I have them all), but I should have enough that I can cover most of the set or at least hit all the high points.

Anyway, it was my buddy’s point that I am just using the blog as a platform to brag about my cards. And yeah, I guess his point is valid. This very post is a prime example of that. I am super proud of my totally rockin' Griffey cards; but I tend to write posts about sets I am currently excited about, and I tend to get excited about sets when I finally track down their most challenging cards. This is by design, but it doesn’t have to be that way.

As it has always been, if you want me to cover a certain set/sets, just let me know. I’ll do just about any set by request whether I have all the Griffeys or not. My recent 1998 Pinnacle Epix post was by request, and I am far from complete on that thing. Recently someone asked me to do one about some late-90’s Bowman, and now that one is currently sitting in draft mode awaiting scans. I do what I’m told.

Also I’d like to mention that I know several guys whose Griffey collections are way better than mine, and any one of them could almost certainly out-blog me. I would totally read their card blogs, too. But seriously don’t, guys. Don’t. Daddy needs his hobby.
Posted by The Junior Junkie at 8:30 AM