The 1998 Pinnacle Epix Rabbit Hole and a Live Cardboard Caesarian

I’ve been dreading this one, but I also don’t have a lot of readers, so when someone requests I write up a specific set I kind of have to do it. Also making posts like these are how I learn about the Griffey game in the first place, so I guess I don’t mind so much.

I already knew Epix was a rabbit hole, and I’ve avoided it for years…but having finally finished a post about it, I can honestly say that it is somehow even worse than I thought.

Epix is a freakin' cluster, guys. There are so many ins and outs it’s hard to even know where to start here, so I’ll start with a simple checklist of all the Griffeys of 1998 Pinnacle Epix:

Before I go into the deets here, just accept that you’ll never own them all. I mean, really accept it. Say it out loud, write it in your journal, mail a letter to your future self that reads, “You will never own all the Epix cards, and that’s okay.” Now, live with that fact for fifty or so more years and then die.

In the simplest terms Epix is a single-year super-insert, that being one of those with cards spread across multiple sub-brands from a single company (not unlike Donruss Crusade). You could pull an Epix card out of just about any Pinnacle brand in 1998, but the odds were generally against that happening. 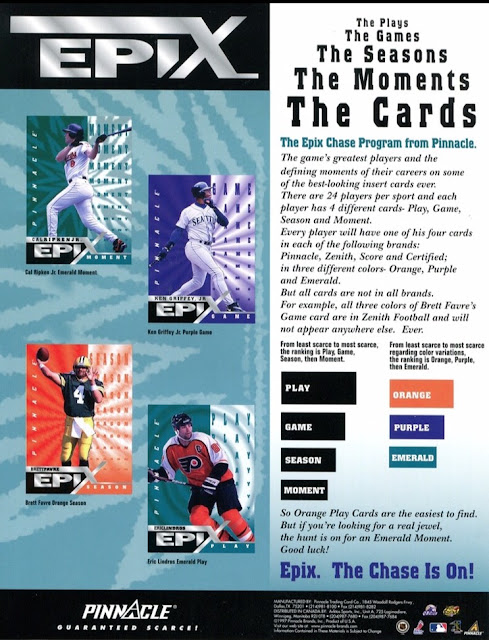 Saying that building a set of Epix is a real feat is an understatement, even for a collector of a single player. Even if you don’t count the header cards or the alleged printing plates, there are still 15 cards, the rarest of which only THIRTY were produced. Thirty – in 1998. That’s only five more than the red Donruss Crusade from the same year.

Man, we haven’t even scratched the surface yet.

So this set was complicated enough as it is, but here’s the worst part: The distribution of each of the four tiers is not the same across the checklist of players. They also broke up the checklist of each tier into four parts and distributed those in four different brands. For example, the first quarter of the “Play” checklist is seeded in Score packs, the second quarter in Certified, the third in Zenith, and the fourth in Pinnacle. Then these were all switched around for each of the other three tiers so no brand got the same player in more than one tier. The result is that you had to buy ALL the products to have a still-all-but-impossible shot at pulling your guy in all four tiers.

It gets worse. The insertion ratios were not the same across all brands. Epix was 1:21 in Pinnacle, 1:61 in Score, and those cards distributed in Zenith packs were actually sealed INSIDE JUMBO CARDS at a rate of 1:11 packs, meaning you had to destroy your jumbo just to find out if you got an Epix at all which you probably didn’t because Zenith jumbos usually contained standard-sized Zenith cards. On top of that, ripping a Jeff Bagwell Zenith jumbo did not guarantee a Jeff Bagwell card inside – the cards hidden inside the jumbos were totally random by player. Plus not everyone was willing to do the surgery. So even though “Play” is the most common tier, Cal Ripken’s Play card – even the orange – is harder to get because it is probably sealed inside a Zenith jumbo somewhere.

Wait – still worse. We don’t know how scarce each tier is relative to the other tiers. If you were to bust 1000 packs of a specific product – let’s use Pinnacle as an example – the odds (1:21) state you should end up with 47 Epix cards. The vast majority of those cards should be “Play,” some would be “Game,” a handful may be “Season,” and with a little luck you may get a “Moment” or two. But the ratios of each tier relative to the others is anybody’s guess. The only stated production run Pinnacle gave us is Emerald Moment at 30 cards produced of each player.

And then it gets worse…some more. On top of all that nonsense, despite the fact that “Play” is the most common of the four tiers, finding the Play card of Barry Larkin is all but impossible because that quarter of the Play checklist was meant to be distributed in Pinnacle Certified which was NEVER RELEASED. Hence, the most common Barry Larkin Epix card is also the scarcest. 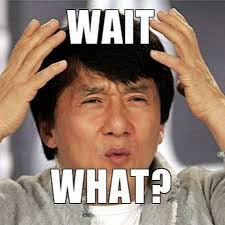 That makes for a total of six players’ Moment cards that never made it into circulation due to the Pinnacle bankruptcy. And wouldn’t you know it? Griffey was one of the six. This is both a blessing and a curse because if you omit the unreleased cards from the checklist, it’s not really all that impossible; but that is only true for collectors of Griffey and five other guys. And set-builders are totally screwed.

So, let’s say you’re a player collector of one of the 24 (25 really but let’s not even go there) guys in the Epix checklist. Please allow me to direct you to the baseballcardpedia page for this cursed set. Check your guy and his tier distribution. Anything with a Z (Zenith) is gonna be a tough get, even the relatively common Play or Game cards. And those with a C (Certified) you can just forget. There are some backdoored cards out there somewhere, but Lord knows where they’ve ended up or how many made it out into the world.

Had enough? Too bad, because there’s also a bunch of OTHER Epix cards you have to get.

First there’s the straight-up insert, All-Star Epix, released in two sets and also available in the same three color parallels. These are actually the easiest Epix cards to find in any color because they made a lot. All-Star Epix insert cards are all marked “Moment,” so don’t get too excited if you have a bunch – they are fairly easy gets. The difference boils down to where the word “Moment” is printed. If it is in the black field at the bottom, it’s the not-terribly-rare All-Star Epix insert. If it is repeated down the right side in the field of chrome, that is the legit Epix card. If it is the latter AND Emerald, um, can I have it?

Second, the year before the release of Epix, Pinnacle also gave out a bunch of “header” cards, those being samples of what Epix would look like. These too came in the three color parallels. There are no players on these header cards – only the Pinnacle logo, but if you’re a completionist like me, you want all three. Unfortunately anybody that wants them has to complete with player collectors of the other 23 (24 tho) guys in the checklist. Have I mentioned the gigantic, 24-player checklist?

Last but not least (kind of most, actually) allegedly there are printing plates. Freakin’ printing plates on top of ALL THIS NONSENSE. I’ve never seen one, but God help us if this is true.

After all that, do you still wanna see some Griffeys? Because I totally get it if you don’t. 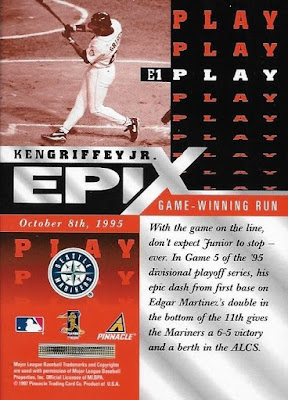 Ladies and gents, the commonest of the common Epix Griffeys. His Play cards were distributed via packs of vanilla 1998 Score with the insertion ratio of ALL 24 Epix cards falling at about 1:61 packs. That puts the purples at 1:488 and the Emeralds at 1:610.

I really hope you like it because there's going to be a lot of cards that look more or less exactly like that. 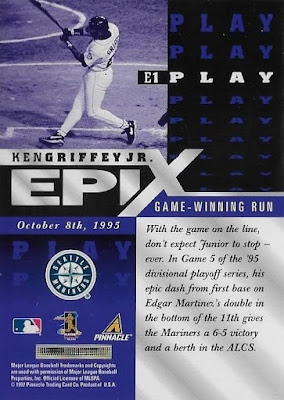 Again 20% of all Play cards ever made are purple, and only 10% look like this: 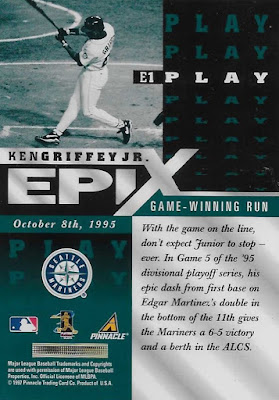 It’s apparently the most common of the Griffey Emeralds, but you wouldn’t know that if you go strictly by the stated insertion ratio (again, 1:61 packs of Score flagship). Then again Score packs were cheaper than Pinnacle and a lot more forgiving than Zenith, so it probably all balances out. Still, 1:14,640 for a specific emerald – that’s a damn tough little nugget. 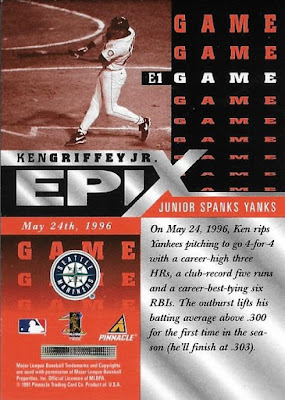 As you can see each tier got its own hologram pattern, and they grow more intricate with scarcity. These were the second-toughest pulls (1:21 packs of Pinnacle flagship), but that is an overall ratio for all Epix cards, not for a specific tier. Like I said, we don’t know the ratios of each tier relative to one another. If you were busting packs of Pinnacle trying to find a Griffey Game card, you were more likely to pull several Play cards of other players before getting any Game cards, let alone the Griffey.

I am missing the purple and emerald Game cards. This should come as no surprise at this point. I did, however, pay out the ear for a couple Season cards: 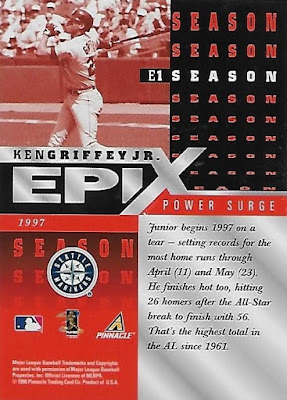 Somebody somewhere sliced open a Zenith jumbo and pulled this card out, and now it’s mine. What a weird concept. 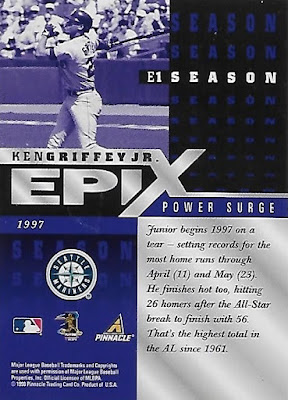 And it happened TWICE. This is the second most-valuable Epix Griffey I own behind the Emerald Play. I do not have the Emerald Season card, but for our purposes, being that none of Junior’s Moment cards were ever released, that would be the toughest get for Griffey collectors.

I do not have any of the Moments cards, but I do have images of them: 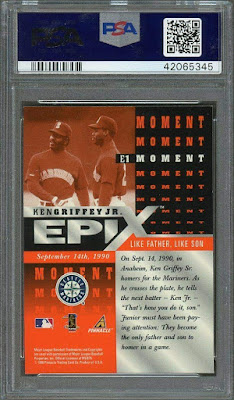 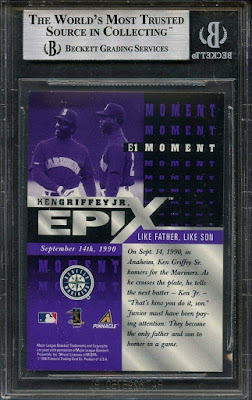 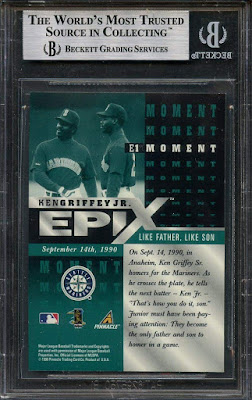 There you go - they exist. These were allegedly backdoored, but we don't know how many were backdoored. The rumor is roughly five or six of each card, but that is totally indefensible - it's just what I have heard. We do know that there AT LEAST TWO of each card out in the world. I am not baller enough to own any of them. Yet.

But Magicpapa is very much baller enough:

I have none of the header cards, but (again) Magicpapa does (of course). And he is kind and generous with the scannage:


These are without a doubt the coolest header cards I have ever seen.

Now the Griffey printing plates may or may not exist (I've never seen one), but I have seen the Andruw Jones, so we know there are SOME out there: 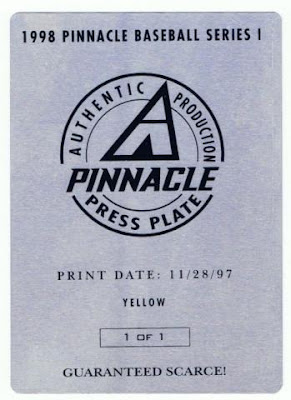 I assume these are so hard to track down because they were meant to have been released in the unreleased 1998 Pinnacle Certified as that was the premium product. I haven't had confirmation of this - it's just a guess.

OK back to cards I actually own:

These aren’t all that uncommon because they are from the All-Star Epix insert, not the regular Epix set. Still, it’s the only Griffey Epix card all but a handful of us is likely to own that says “Moment” anywhere on it.

Here are the cards I need to complete 1998 Pinnacle Epix. I say "cards" instead of "Griffeys" here because I count those headers:

If I can get a hold of the Season Emerald, the rest will almost certainly fall right into place. For us practical Griffey collectors, that card is the big prize.

Hey, guess what? I happen to have a handful of 1998 Pinnacle Zenith 5x7 jumbos: 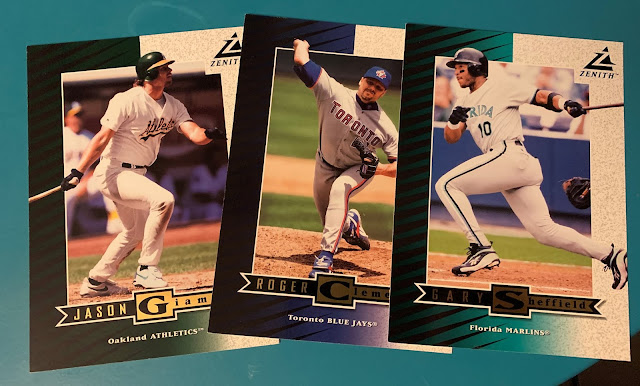 As I said before this is where you could pull the Season cards from, and I am going to do that RIGHT NOW.

What am I hoping for? Well, the Emerald Season Griffey would be my main want, but any standard-sized Griffey from this set would be pretty nice (I don’t even have the Zenith base card yet). Emerald cards for any rando player would be pretty good because I could sell them on eBay and use the money to buy more Zenith jumbos and try again. Let’s just hope for a Junior, shall we? 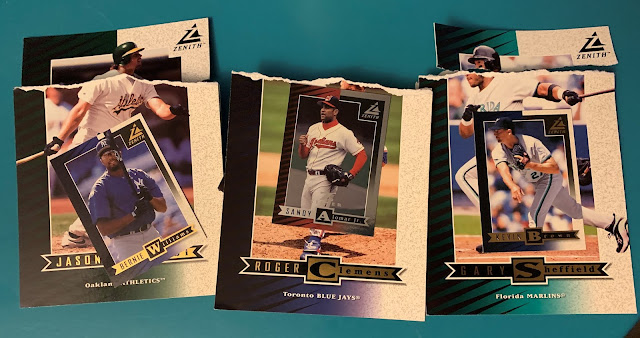 Couldn’t just let it die, could ya, Pinnacle?

Here are the full-sized scans of the All-Star Epix cards: 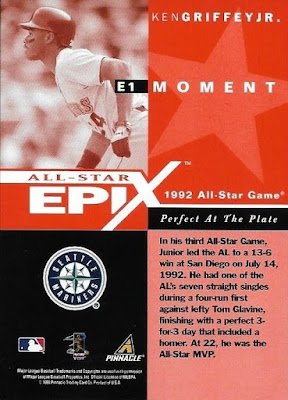 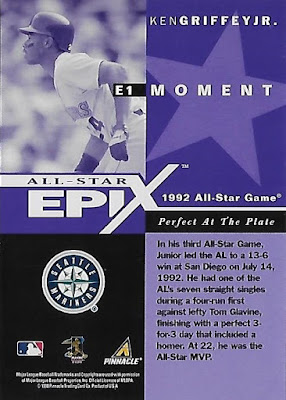 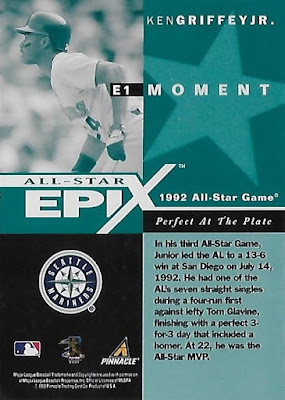 Now I will be very disappointed if Magicpapa does not comment below with the link to his legendary Photobucket. Your move, MP....:-)
Posted by The Junior Junkie at 8:30 AM