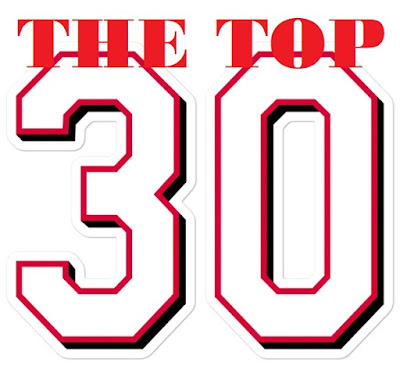 Every year I start to put this list together in late October, and every year from the time when I actually start ranking up the cards, I acquire a bunch more that throw the list into utter turmoil. A major chunk of the list (like half) this year was acquired just in the last few weeks of 2019. I think it has something to do with other collectors selling off their cards to pay for Christmas. Or maybe I’m just more involved and/or excited about cards at this time of year because I’m making the list. So meta.

Maybe if I could keep that Griffey passion up year-round the list would be better. Oh, well. 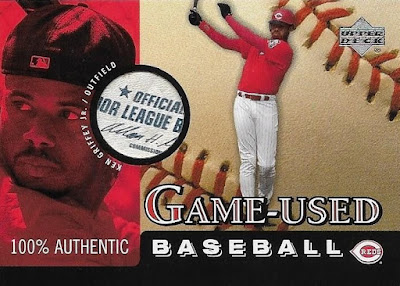 Here's a first - first repeat from a previous list. It's true I already got one of these last year with the tiniest bit of red stitching visible in the seam. This one, though, has that giant chunk of ball text visible. There’s enough of these around that what part of the ball you get plays heavily in the price/desirability of the card. This is one I couldn’t pass up. 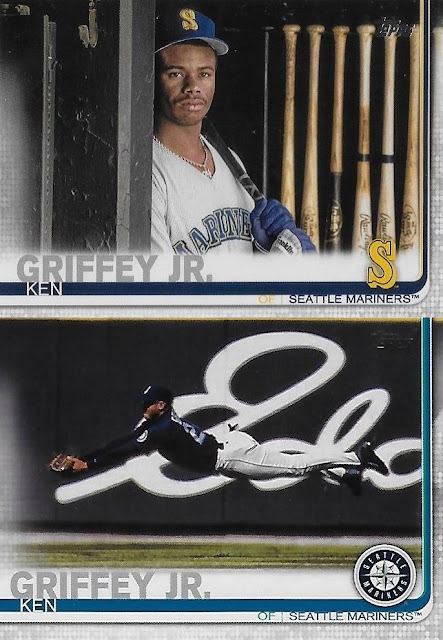 If it were up to me, there'd be a Griffey SP in every Topps flagship base set forever. We almost always get a great Stadium Club-quality photo we’ve never seen before, and they tend to be scarce enough that landing one is pretty exciting. Right on. 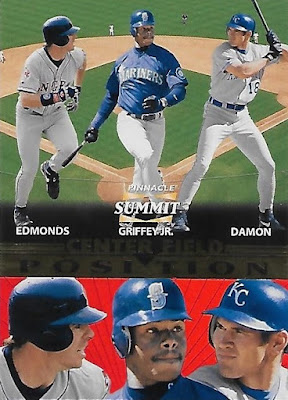 This insert from 1996 Pinnacle Summit shares a major characteristic with the notorious Pinnacle Skylines from the same year: they were only available in a very specific kind of pack (magazine packs for Skyline, retail packs for these), and those packs were very difficult to find. Then even if you were lucky enough to find packs in the first place, they were still seeded at a scant 1:50. It’s not as famous as its acetate counterpart, so it doesn’t command the prices Skylines does; but Positions is just as scarce if not more so than Skylines all day. Admit it – you’ve never seen this one before, have you? 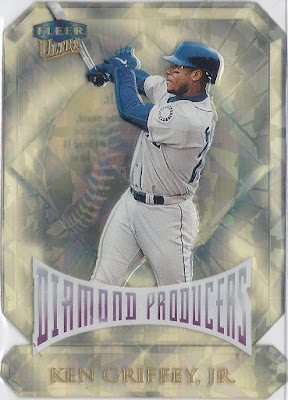 Ah, the golden age of the dreaded 1:288 insertion ratio. There are uglier cards at that very same level of scarcity (including one with the same name and on this same list – weird), but few combine that shiny crackle effect with die-cut acetate quite like this year’s Diamond Producers. The Kerry Wood from this insert is dirt cheap – you should buy one just to look at. BTW, I am getting really, REALLY close to finishing off every ‘90’s Ultra Griffey. 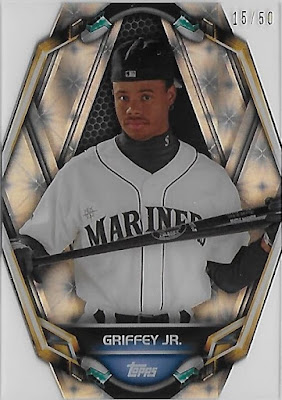 Again, Topps had a really great showing this year, not just in this list but in general. Some solid Griffeys for 2019. For example High Tek, which I am not generally crazy about, was better than ever because the new cards are really damn cool. I really like the fact that they skipped the die-cutting and went with clear, negative space in the places that would otherwise have been cut away. Some of you know who got the gold 1/1 of this – to those that don’t, it wasn’t me. 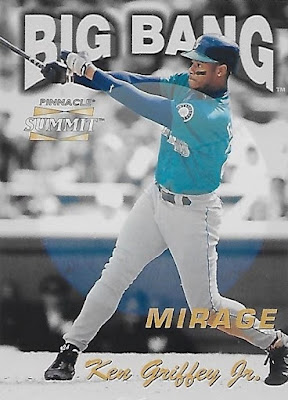 This is one weird insert because the regular cards and their Mirage parallel had the exact same stated print run of 600 per player as well as the same insertion ratio. I don’t have the regular card, but there’s a good reason for that: I don’t really want it. I wanted a Mirage parallel because it is one of the coolest ideas for a parallel I have ever seen. Just a big, holographic baseball printed right over the front of the card. Man, these should have been #/100 or something because THAT is really cool. WHY DID THESE GO AWAY? Somebody bring this back please. Panini? Topps? <sigh> Leaf? (Just kidding I love Leaf, and you’ll see why at card #1) 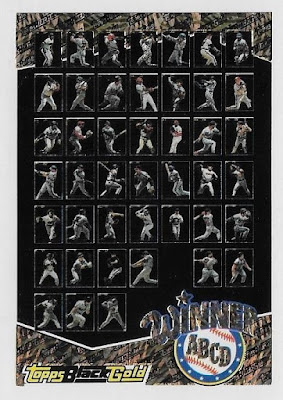 Black Gold were 1:76 wax packs in 1993 Topps flagship. Most cards pulled were regular old player cards, but some were redemptions for different parts of the total set which was divvied up into four parts and assigned letters. This was the rarest of the redemption cards and won its owner the entire set (parts A, B, C, & D). The following year’s set would complicate things a little with redeemed “Certified” version of the redemption cards, but back in ’93 everything was still nice and simple. A neat and somewhat rare relic from one of Topps’ first real inserts. 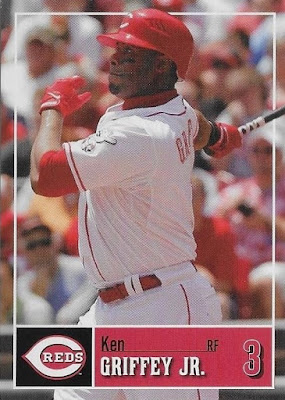 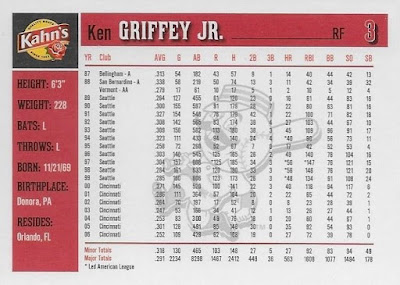 That’s right, baby, I got a new Kahn’s card this year!!! Death to the non-believers! Kahn’s is life! Kahn’s is prosperity! KAAAAAAHHHNNNNSSSSSSSSS! Frickin’ LOVE THESE THINGS. 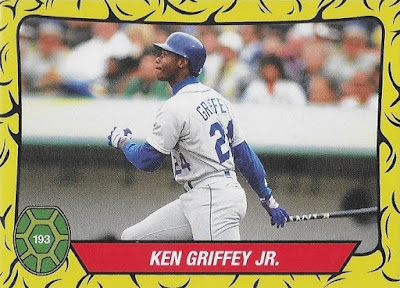 In the annals of cool things that Topps has ever done, making a modern set of baseball cards based on the classic Teenage Mutant Ninja Turtles trading card design from the early ‘90’s and including age-appropriate Griffey in it is probably in the top 5. Okay, so popularizing baseball cards in the first place was pretty good, I guess. The Adam Greenberg card was sweet, too. And I don’t know – maybe they give to some charities or something? No idea. But this – THIS – is something special. I really do try to avoid dropping F-bombs in this blog, but right freakin’ on, guys. You’ve made what I can only assume is your target market very happy. 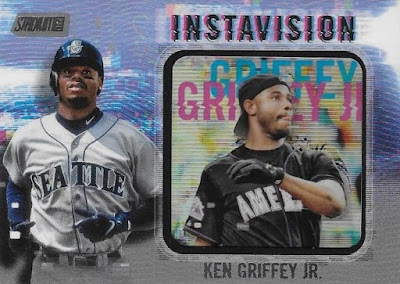 It seems every year there is that one Griffey that EVERYBODY WANTS. This year it was this sweet-looking Stadium Club insert with a little inset square of refracting chromium and a damn scary 1:320 insertion ratio. I’m not surprised this one ended up on so many Griffey guys’ want lists – it is just oozing with that old, tacky ‘90’s magic. Could this herald a return to the off-the-wall inserts of old? BTW, the 1:1 Gold Rainbow is the rarest card in all of 2019 Stadium Club at 1:105,174. Chase THAT.

These cards are getting pretty fancy, and I’m happy to say we still have some doozies ahead. Thanks for reading.
Posted by The Junior Junkie at 8:30 AM