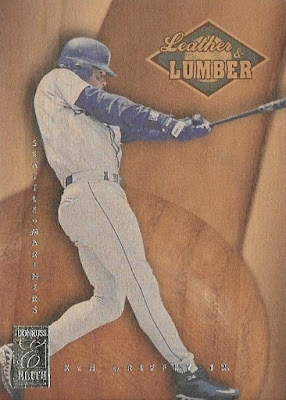 Donruss had already been making the Elite insert for six years when in 1997, amid a flood of other premium offerings from all the other big players in the card market, they decided to flip it into its own premium brand. The Elite name had the advantage of existing desirability and pedigree, so it made a lot of sense. Plus being a Donruss/Leaf nut myself, even I picked up a pack or two of these when they came out.


Elite cards were usually characterized by holofoil and fancy script, but they cooled things off a bit by using simple foilboard which I’ve always found a bit underwhelming, especially when you try and scan it. The picture is pretty sweet, but I am just not crazy about foilboard in general. Especially scans of foilboard. Yeesh.


And while we were already used to thick, stately borders from the Elite insert cards, these feel like overkill. Half the card is foil border and massive nameplate, and the other half photo. Again, great photo, but geez, guys. Let’s pump the border brakes, you know? 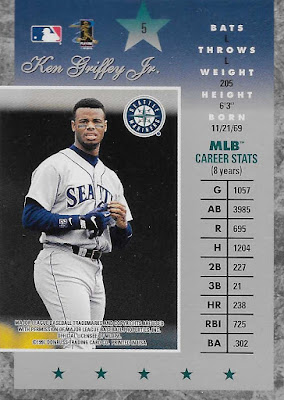 I will always sing the praises of post-1992 Donruss card backs. For this set they didn’t give us blurbs or stat analysis or anything fancy – just a nice layout, big player photo, and plenty of stars. It’s certainly more focused on aesthetics than content, but that seems to have been the theme for most premium sets of the ‘90’s. Donruss did it well.

There is also a 1:9 gold parallel of this card that I don’t have because it’s just gold-tinted foilboard. Meh.


Leather & Lumber is a legacy insert in that Donruss gave us several iterations of it (and even its own set, eventually); but of all the L&L Griffeys they produced, this is the best of the lot. The most notable characteristic here is that the front is printed on real wood and the back on genuine leather. Subsequent L&L inserts would also feature fun design gimmicks like bat relics or a simulated leather surface, but none were more on-the-nose design-wise than this first one. 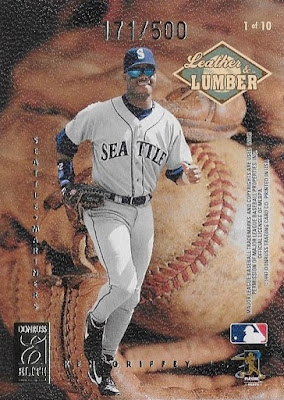 Either side would make a perfectly reasonable card front with complete nameplates, insert AND brand logos, and some tasteful gold foil. Being serial numbered to only 500 is pretty significant, too, given this was only 1997; but it also means the cards are pricey and getting moreso as the years roll on. Don’t dawdle.

I’m in no hurry. Maybe if I find one for five bucks somewhere I’ll bite, but as far as I’m concerned the biggest box (Leather & Lumber) is checked, and that’s plenty.

I feel like this post would be incomplete without mentioning the totally awesome (but Griffeyless) Passing the Torch insert, so here it is: 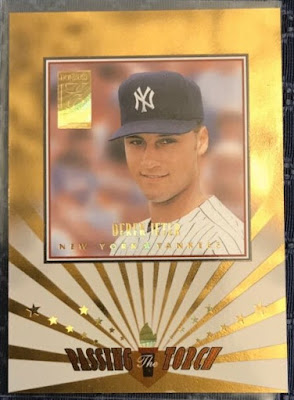 Just like Leather & Lumber, these would also make appearances in later Leaf/Donruss products across multiple sports; and also like Leather and Lumber, the original is still the best. If you count all the sports Donruss cards have been made for, this is arguably their most prolific insert of all time.

And the design is always good: 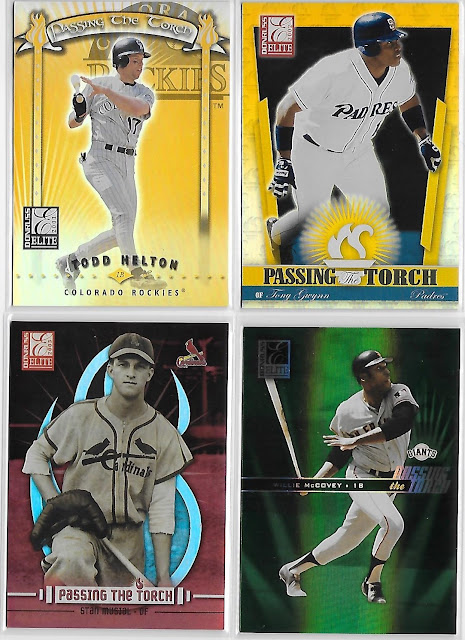 And speaking of legacy inserts, Leather and Lumber is still around today as its own standalone brand, and darn it if it isn’t pretty neat. Here’s some of the cards of neatness: 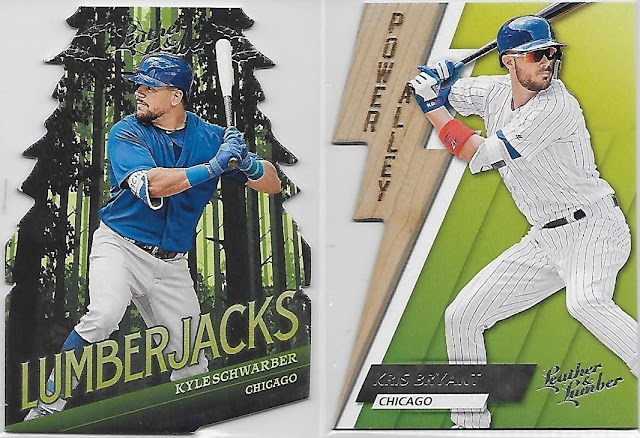 Panini reminds me more of Pacific every damn year. Go ‘head, Panini. You do you.
Posted by The Junior Junkie at 8:30 AM