Top 30 Griffey Acquisitions of 2019: The Runners Up 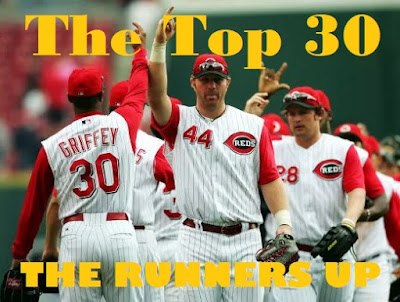 In case you couldn't tell from my grand total of THREE POSTS in all of 2019, I’m drifting away from the hobby, guys.

The owner of my LCS told me a few years ago this would happen. It was the day I told him we were having a kid. He said it doesn’t matter how hardcore a collector you are – once kids enter the picture you start coming to the shop less and less, then eventually not at all, and finally you show up with your arms full of white boxes looking to sell off the whole caboodle.

I’m at stage one of that – I still go, but visits are few and far-between. I haven’t been to a card show in months. My set-building has all but stopped. I haven’t even bought my yearly box of flagship or even Stadium Club. It was several weeks before I even knew what the 2019 Stadium Club card looked like. And on top of all that I’ve begun setting aside that cardboard I plan on selling off sometime soon (not Griffeys, of course).

But I’m still collecting Griffeys, and some of them are pretty damn cool, so I feel like I have enough here to keep the annual Top 30 list going.

But I do miss writing posts….

We will start with the honorable mentions – the cards that didn’t crack the Top 30 but still deserve a mention because they’re pretty neat, dammit. Note Topps’ very decent showing in the lists this year.


These were 1:37, but with 30 cards in the checklist that makes for some tough pulls in the quest for a specific player. It’s also a pretty neat design that puts Pacific’s Spanish-language bent in the forefront. Pound-for-pound, Pacific is still the coolest brand there ever was. That said, to this very day I’ve still never seen a pack of Pacific ANYWHERE EVER.


Neat design with cool fonts and yes, some neat diffraction foil. I don’t know what they were getting at with the “Low Tek” thing – it seems about as Tek as any other Tek I’ve come across.


Boxes were $150 for five cards or $30 per card, and with such a product it should be no surprise that the insertion ratios are unknown. I’m not actually all that excited about this one, but it’s hard to leave any #/25 Griffey off the list.


Leave it to Donruss, perennial lords of the creative-use-of-serial-numbering, to give us a pretty insert numbered to one of each player’s career-defining statistics. For Junior’s card they chose his career-high 56 home runs in 1997, a feat he never repeated nor surpassed. Generally speaking All-Time Career Best is not a terribly an uncommon insert, but these numbered gold parallel are scarce (and easy on the eyes if you ask me).


These dual-sided gold hologram prototypes not all that easy to come by. They’ve been growing in popularity in Griffey circles, and I was able to grab a few more this year for relatively cheap. A rare oddball with actual scarcity and even a little desirability. I'm still one short of the 5-card set, though, so let's not get too excited yet...


Topps introduced a membership-based program in late 2018 wherein you give them $200 and they send you cards throughout the year, some of those being Griffeys which is where we come in. They spend a lot of space on the back explaining the card itself as opposed to the player on the front (which is weird), but I like the front so much that I’m willing to let it slide. The design is based on “a small-run test product” of stickers Topps made in for the Yankees and Pirates in 1967. If you like this, you should also check out the “Frank Thomas for Mayor” card from the same set.

OK, seriously tho: when do the t-shirts come out, Topps? Print this baby on any color except white and you got a buyer. Oh, and give us one in 6T, please. Griffey is my kid’s hero even though my kid doesn’t know it yet.


I may be the planet’s biggest fanboy of the amazing Metal Universe brand, so the fact that it has taken so long to get the FOURTH rarest Griffey from any one of their sets is a travesty. And although I resent the shift in design between the ’97 and ’98 sets, you better believe I still want one of those crazy-tough Precious Metal Gems.


I’ve never been super into High Tek, but there is something to be said about tech-forward, “cool factor” cards when the design is something new. The colored holographic line pattern of the parallels is front-and-center (and centered!) this year, and after seeing three or four different colorways online, I finally broke and grabbed a few. Also, purp-a-derp. Y’all know I loves that purp-a-derp.


I’ve got to have two dozen reprints of this puppy by now, but I’ll be damned if they release a single one I don’t pick up. This year’s is especially nice if you know what to look for.


Overproduction-era reprints are so my jam. Plus we got all kinds of colorways and chrome and refractors and just everything a kid could ask for. Smitten.


A somewhat early relic with a unique design and noted scarcity.


‘90’s inserts generally start getting expensive around the /500 mark, but don’t discount those just a little higher than that.


This card almost made it into the Top 30 on coolness alone. As neat as the scan is, this thing is a killer in person. Panini has been doing the Black Friday thing for a while now, but as of 2019 the bar it at an all-time high.


And I am sorry, but this is straight-up GOTY (Griffey of the Year). Also, I'm NOT sorry. Woof woof.

Up next: Part 1 of my annual Top 30 list. Thanks for reading.
Posted by The Junior Junkie at 4:52 PM