It’s Pinnacle-tober here at the Junior Junkie. This is the month I cover the four Pinnacle sets I have not gotten to yet, including the inaugural ’92 set, the forgettable ’93 set, the "New" '97 set, and the doomed ’98 set, culminating in the complete Pinnacle Griffey master set. 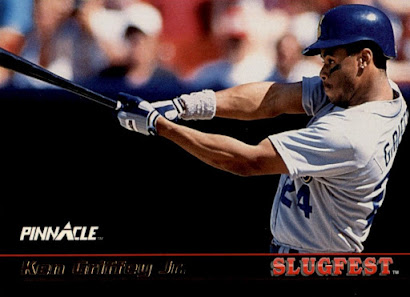 Was there ever a brand that more perfectly exemplified the ‘90’s than Pinnacle? These guys literally hit every cardboard trope of the era:

Pinnacle has a lot of well-deserved fans, and I’m one of them. They are the quintessential ‘90’s brand in every way. It’s even more ‘90’s than Ultra if you count the fact that Ultra stuck around well into the 21st century. It’s sad, but going out of business in 1998 is about the most ‘90’s thing a baseball card company can do. We miss you, Pinnacle.

That's why we are starting Pinnacle-tober with this, their inaugural set. With all the slick cardboard this brand gave us in their heyday, it’s fun to go back to their roots. 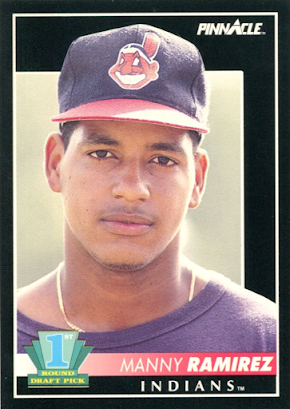 This is just a great looking rookie card. It’s also strikingly similar to a certain someone’s Upper Deck rookie. This thing was money in the late-90’s but a dollar bin card at best nowadays. That still doesn’t diminish from the coolness.

Pinnacle went with black borders, a design choice that would carry through in one way or another to just about every card they made for those first few years. That combined with the high gloss and quality card stock gave these a high-end feel but also made them more condition-sensitive than most releases from this era. Finding one of these with little or no chipping can be a challenge.

It’s totally worth it, though. Nothing is out of place here. Even that partial sub-border within the main border frames the card nicely, hammers home the black theme, and accentuates the card’s overall Pinnacle-iness. There really was nothing else at the time with this level of modernity.

Pinnacle also embraced the subset like no brand before it. Even in this first set most of the subsets look like reasonable-quality inserts. 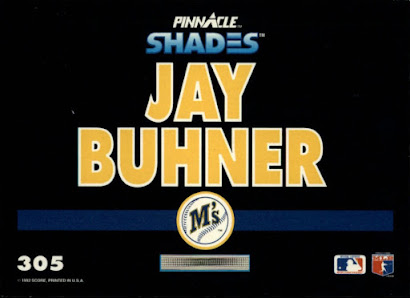 This very same theme would be used in some great die-cut inserts including a proper one from Pinnacle five years later. The back is as scant as it could possibly be, but what more do you really need on an insert back? A boring re-telling of the stats already on the base card? An anecdote about that time Buhner wore sunglasses (I always assumed he never took them off)? No. You need a card number and some legalese and that’s it. Strictly speaking, anything else is decadent and unnecessary.

This would have been a great Studio insert. Check out Kirby avoiding the hell out of that corner. The lie of the 8 is precarious to say the least. I take it he's aiming at a ball in the far corner because cutting that 15 could end in disaster. Then again odds are good he missed here because Cal Ripken won this particular pool tourney according to the card back. Kudos to Kirby on the house stick, though. There's nothing more satisfying than clearing the table with a janky old house stick against some bozo with a Balabushka. Only fools bring their own stick to the hall.

Also Nolan Ryan can be spotted riding a horse on what must be a record number of baseball cards. It's probably not even close. 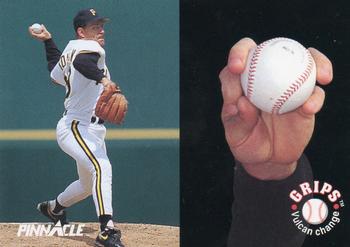 This pitcher-centric subset highlights different grips for each player. My favorite is the “Vulcan Change” which sounds like something my wife and I tried the other night after a few glasses of wine (I didn’t have the leg stamina for it, but I see what they were getting at). 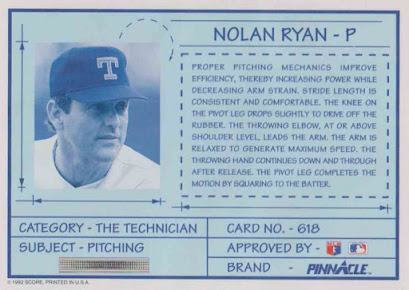 Another subset that could very well have been an insert, this one sports a cool blueprint aesthetic that points out strategic positional moves right in the card photo. The blurb, while not really player-specific, gets down and dirty with the attributes of a successful player at each subject’s respective position. They got a little playful, too, dividing up every aspect of the card including the number, brand, and requisite MLB and Players Association logos. It’s all very meta and even a little snarky, two things that immediately grant it Junkie-approved status.

Okay, sold on Pinnacle yet? Let’s peep some Griffers.

This design looks ten years ahead of its time. It’s clean, modern, and missing nothing. I’d have bought the living daylights out of this brand back in ‘92 if 11-year-old me wasn’t busy playing Sid Meier’s Civilization and memorizing Ren & Stimpy quotes. 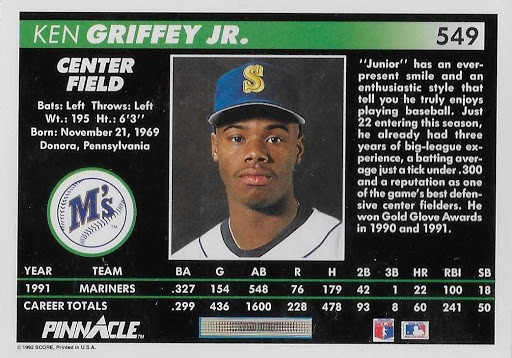 It should be no surprise that Pinnacle had amazing card backs being they were made by Score, king of card backs in the Junk Wax Era. I love the horizontal design here (which they kept for the ’93 set) with that big, centered portrait and zero defects to speak of. It’s a little funny that they mention his “ever-present” smile in the blurb, but chose the most dead-pan photo they could find to support it. Luckily he would loosen up a bit for future Pinnacle releases. 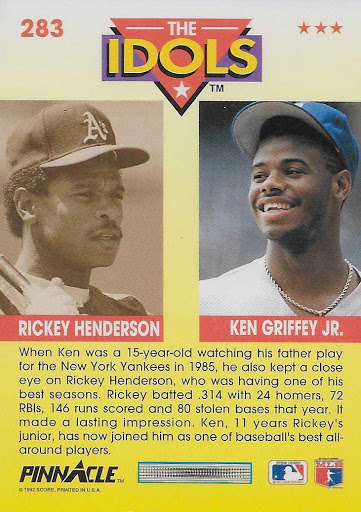 I’m still a little surprised to see Rickey on here. Not that there’s a single thing wrong with Rickey – I mean, I get it – but I kind of expected Willie Mays, Willie McCovey, or the obvious choice, Ken, Sr. Does Rickey have something to do with Junior wearing #24? Am I a bad Griffey fan for not already knowing this? This card is making me question everything.

The cards themselves are cool, of course. Sepia for the idol, the card subject superimposed in color, a nice subset logo that could very well be an insert one. It’s the works, man. Well done.

The Idols continued into the very next year as you will see. While I wish there was a Shades or a Sidelines card for the Kid, they left our guy out. Maybe because he was Upper Deck’s main squeeze? Was that a thing yet? 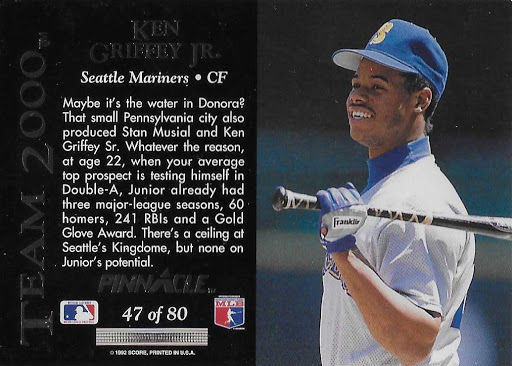 Pinnacle’s easiest insert pull was this set at three per 27-card “Superpack.” It was comprised of a whopping 80 cards, all players destined to be stars by the year 2000. While things didn’t quite work out that way for a lot of the guys in the checklist, it remains a who’s who of young ‘90’s talent. The gold foil on the front and back of every card was a pretty huge deal and a major selling point of Pinnacle in general at this time. Some great photography all over this one. Peep the massive Taylor on his earlobe. Homie's iced out.

Slugfest would show up in multiple Pinnacle sets through the years including 1993, 1996, and even the 2013 reboot; but this first one has a charm few of those can touch. These also showed up only in Superpacks at a rate of 1:1. The horizontal orientation is the rule across the entire checklist, allowing the photography to highlight some of the meanest swings of the early ‘90’s. It’s a photogenic set to say the least and a personal favorite of that particular year. 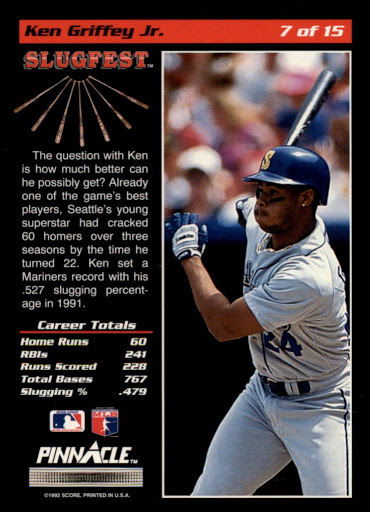 The back is loaded with goodies, too, including what very well might be the remainder of that massive swing from the front. Pinnacle really clicked with inserts right out of the gate.

Whether it was Team Pinnacle, Team 200X, or Z-Team, Pinnacle anointed themselves the perennial fantasy roster-setter in one way or another. And Junior pretty much always made the cut.

Team Pinnacle was the most prolific example of that fantasy team theme, and it deserves a timeline all its own. Junior made this first cut, but was tragically omitted from the ’93 insert only to make a triumphant return in ’94 then on all the way through the demise of Pinnacle brands. All Team Pinnacle inserts feature the same theme: two-sides, each side showing a player from one of the two leagues. The first three sets are pretty interchangeable, all featuring paintings of each subject player. This changed to photos with Dufex embellishment for the ’95 release and thereafter. 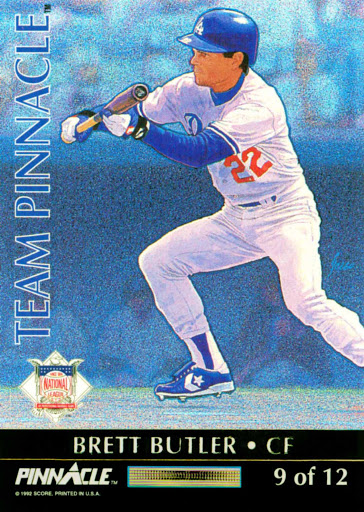 As for the paintings, they’re no Dick Perez. They’re not detailed enough to be considered photo-realistic, but they are in that arena. More specifically they are not abstract or impressionist in the slightest. I assume the majority of baseball card-collecting bros are just fine with this, but artsy-fartsy liberal arts kids like myself may find it a little boring. Say what you want about Dick Perez, but he was rarely boring.

One strange aspect you may have noticed is that every single Griffey card in 1992 Pinnacle shows him swinging away. Being that this is a painting, they could have chosen pretty much any position they wanted, and yet they chose one of.....uh-huh, him swinging away. Come on guys. 1:100 is tough - give us something else here. Even Brett got a sweet bunt.

Team Pinnacle would end its life as an insert in Pinnacle Plus and finally as a Pinnacle Collector’s Club insert, both in 1998. It does make an appearance in the one-and-done Panini reboot in 2013, but I don’t think a lot of people noticed.

That's every 1992 Pinnacle Griffey, so no want list today. Next week we will look at the Griffeys of ’93 Pinnacle, including the infamous Cooperstown Card. Thank for reading.