It’s Pinnacle-tober here at the Junior Junkie. This is the month I cover the four Pinnacle sets I have not gotten to yet, including the inaugural ’92 set, the forgettable ’93 set, the "New" '97 set, and the doomed ’98 set, culminating in the complete Pinnacle Flagship Griffey master set. 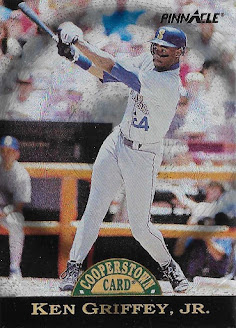 With the exception of a more prolific use of foil, 1993 is kind of a step back in terms of card design for Score’s premium offering. Not unlike the strange jump from the great 1989 to the not-as-great 1990 Upper Deck designs, it feels less refined in just about every way compared with the beloved 1992 set. Jeter fans might disagree here because of this:

That’s a really nice rookie card, but it changes nothing. 1993 Pinnacle is objectively meh.

There are still plenty of great Pinnacle cards this year including some of the first Dufex and one of the most legendary Griffeys of the early ‘90’s, so it’s not a total waste.

I am a pretty big fan of Pinnacle in general, so as a sign of respect for this great ‘90’s brand, I would like to show you some of the subsets and inserts of the ’93 set. The Griffeys can wait a minute.

It’s been done before and since, sure, but it’s hard not to love these things. Did they have to double-up on the mouth breathing shots?

As promised The Idols is back. And it appears Pinnacle was pretty accommodating with the heroes, too. Larry Walker, for example, picked some hockey guy and Delino here chose civil right leader Malcolm X. I mean, there he is. Malcolm X on a baseball card, Delino swinging away for Canada superimposed right over. How often are you gonna see stuff that?

Another great insert concept relegated to a subset, Hometown Heroes would eventually become its own standalone brand from Panini at which point, exactly 20 years later, Griffey would finally get his Hometown Heroes card. Unfortunately the cards in that set were not as cool as this first one. Sorry, but McDonald's colors will never look as cool as silver and black. 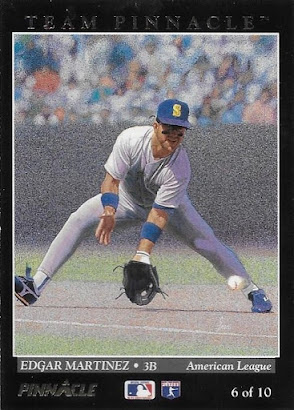 They must have used the same artist for the Team Pinnacle Insert this year, but they regressed from full-bleed to full-borders for some reason. Oh, and they left out Griffey. The hell, dude? 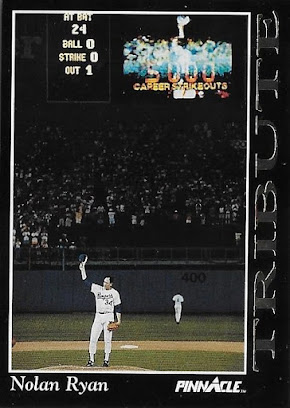 Pinnacle also made an entire Tribute subset to George Brett and Nolan Ryan, and the photos are excellent. Honestly it's kind of amazing Ryan was still pitching (and occasionally beating someone's ass) at this point.

There was also a Team 2001 insert just like the previous year's Team 2000 with the same design and everything. It doesn't have Griffey in it, though, so who gives a crap.

This would not be Griffey’s last #110 of 1993, but it’s certainly his cheapest. While there is something to be said about a nice photo completely free of overprinting and logos, this thing strikes me as an oddball more than the premium base design it was meant to be. I tend to like black borders which, again, worked beautifully in ’92; but here they are just a condition liability. It’s a wonder how they nailed it so hard just a year earlier only to follow up with this Plainy McPlainerson base card. Even the first use of foil on a Pinnacle base card wasn’t enough to save it.

Just give me "a" design element. Anything. I mean, come on, look at what the hockey cards looked like this year: 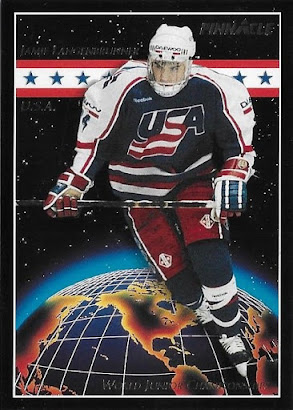 LOOK HOW COOL THIS IS! Why didn't we get this? You're based in Texas, Pinnacle - why are you knocking it out of the park with hockey? 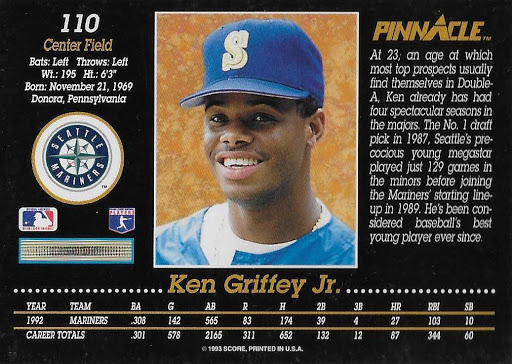 As unimpressive as the front is, this back is a thing of beauty. The star here is that Studio-quality portrait all centered-up and surrounded by the standard card back stuff. The blurb is solid, too. A+ on this side, guys. While ’93 Pinnacle is positively loaded with cool subsets, Junior makes an appearance in none of them. He did, however, show up in the one-per-“superpack” (series 2 only) Slugfest insert. It’s a nice enough card despite about half of that blurb being a straight-up recanting of his season stat line. And of course Pinnacle remained consistent with the black-and-gold theme this year.

Also this is the first Pinnacle Griffey on which he is not swinging away. Here he is just getting ready to swing away. Variety!

That’s it for the Pinnacle flagship set. Lucky for us Pinnacle was all about those direct-sales retail sets. In addition to a 30-card set celebrating the life of Joe DiMaggio complete with autograph pulls, they also released these two other totally above-average sets: 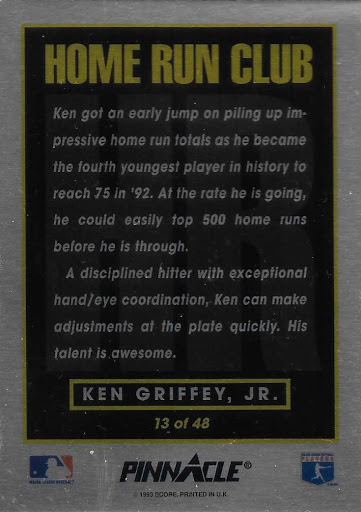 These card are metal Dufex, guys. METAL DUFEX. When I first laid eyes on these things in the early '90's I was immediately hooked. A fellow card guy had a whole set, and while he wouldn't trade away the Griffey, he did trade me a Mo Vaughn. I was glad to have it, too (I still do). They have the look and feel of a $500 card. Unfortunately they are cheap as dirt because they made 200,000 of them (serial-numbered on the header cards). So I bought two sets and even opened one just to show them to you here:


Despite the high production run they are real stunners. They have the slightly-below-room-temperature feel of metal and keep whatever shape you bend them in, so be careful. You can find whole sealed sets on eBay for pennies per card. I'm not usually into direct-marketed sets, but these are a big exception. Go buy one.

Can you imagine these in a refractor? Just the thought makes my pants tight. 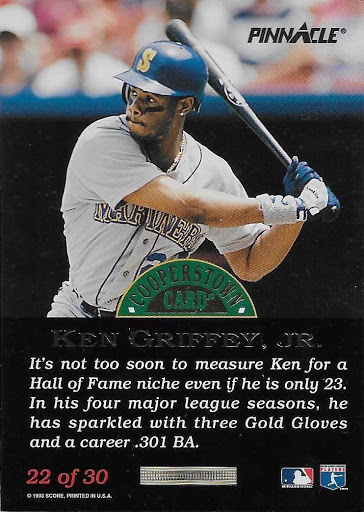 Ooooh big swing away. This set was pretty mass-produced, so they're not terribly pricey even to this day (though they do run more than the Home Run Club which is weird). There's a surprising number of guys in this checklist who are NOT yet in the Hall of Fame. Hopefully there'll be a few Veterans Committee inductions from that list. 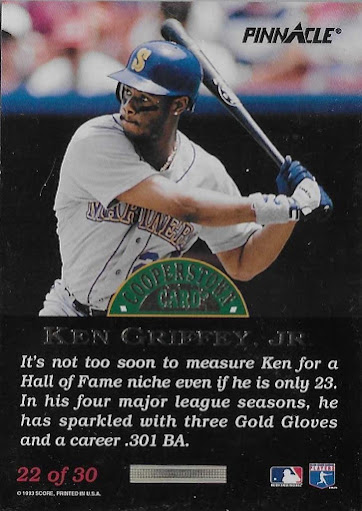 There it is: one of the biggest Griffey gets of the early '90's. Let’s go straight to BBCP for this one:

“A special all-Dufex version of the Cooperstown set was distributed to attendees of the 1993 SCAI conference in Dallas, TX. 1000 Dufex sets were produced; however, since attendance at the convention was less than anticipated, this set was also distributed through other methods.

Because of the scarce (by 1993 standards) production run, these are some of the more valuable cards issued in The Junk Wax Era.”

A run of 1000 is easy pickins nowadays, but back in ’93 it was decidedly not. For reference that is the same quantity of each version of the 1994 Upper Deck Griffey/Mantle cards.

They’re also some of the first Dufex card ever printed. Being that Dufex would become Pinnacle’s trademark effect, that makes these cards a must-get for fans of the Pinnacle brand (of which there are many) or of ‘90’s cards in general. And I’ve said before, these are rite of passage cards for Griffey collectors. You just need it.

No, it's not mine. Allegedly some promos were printed for the regular Cooperstown cards. BBCP lists only three players having had promos produced – Andre Dawson, Eddie Murray, and Mark McGwire. To be fair I’ve never seen one of these in person, but I have seen several Griffey promos bought and sold in various online card haunts. It sure seems like they exist.

The nature of these promos, differentiated only by black printing across the image on the back and nothing else, makes me nervous. I’m not saying every promo outside of those three players is a fake. PSA has graded and authenticated numerous promos of Nolan Ryan, Will Clark, Joe Carter, Clemens, Mattingly, Puckett, Brett, Winfield, and, yes, Ken Griffey, Jr. It doesn’t get much more official than that.

The explanation that seems the most correct is that promos were made for every card in the set and BBCP is only showing those promos they’ve verified which I totally get. However, if those three players were officially announced by Pinnacle as the only promo cards, prospective promo buyers (and their current owners) might want to know about that.

So '93 Pinnacle flagship was mostly a dud this year for us Griffey guys. There were still some decent (ugh) non-Griffey base cards to be had. And those two retail sets hold up well even to this very day. Enough bright spots here to give Pinnacle a pass in '93.

Next week we jump straight to the infamous New Pinnacle of 1997. You can read the posts I've done for all the in-between sets at the links below. Warning: I usually wait until I have most of the Griffeys from a given brand before I do a post about it, but that wasn't always the case. A few of these I probably tackled a little prematurely. Just a heads up.