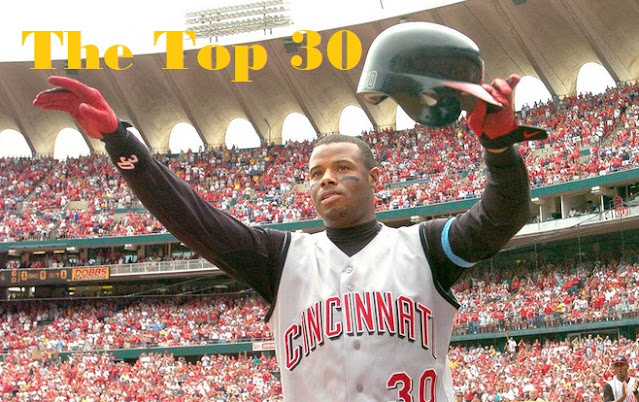 I like to try and classify what kind of Griffey-getting year it was in these little intro parts of the Top 30 posts. I suppose this was the year of filling those ‘90’s holes. There were a bunch of key ‘90’s inserts and parallels I’ve put off grabbing for years such as the remaining Metal Universe inserts and several late-'90's refractors, both segments of the market that positively blew up in 2020.

In addition to that I also tackled some pretty complicated ‘90’s sets such as Epix, 1997 Score, and ALL the Pinnacle flagship sets; so in the course of putting those together I completed a bunch more checklists.

So if you’re a fan of totally awesome ‘90’s cardboard, you’ll be happy to know that ‘90’s cards make up a whopping 2/3 of the list this year (plus a solid chunk of the Runners-Up). 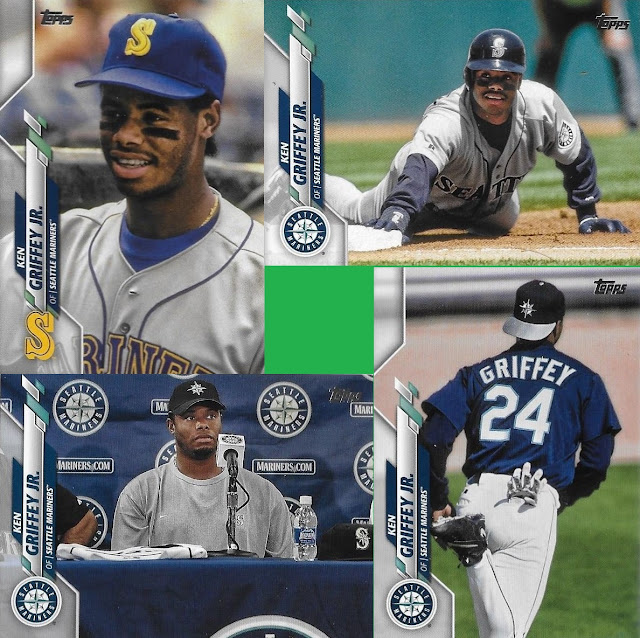 Great photo selection this year, and Topps did literally exactly what I have asked on this very blog and gave Junior multiple SP's (or "Legend Variations") in both their flagship and Update sets. Two of these are even those infamous "S"SP's. Yes. Love 'em. Keep on doing this forever. 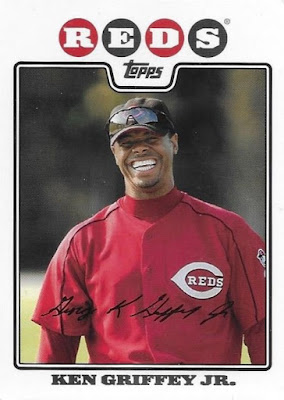 There is what I've always thought of as a “dead zone” in the Griffey card timeline that starts around his move to the Reds and runs through his retirement up to the super cool modern premiums we have today. The desirability as well as the values of his cards from this dead zone just aren't as high. If you look at all the Top 30 lists as a whole they are usually comprised of a lot of mid-to-late 90’s cards, maybe a few from the first couple years of the 2000’s, and then not very much until the late 20-teens. There are exceptions, of course, but on average the values tend to be lower in this period for comparable cards from before or after it. I suspect it has something to do with the fact that our guy looks better in Mariners colors – that and the surplus of autos and relics available from this period. I only mention it now because this card is one of those exceptions, a must-get from the Griffey card dead zone that took me way too long to finally track down. There's nothing inherently better about the gold version other than the background accent color and the serial-numbering. Maybe if the bit of cap had some logo or a little bit of salt stain or something gross like that it would make sense to me. Whatever - here's both anyway.

27. 1996 Pinnacle Aficionado #75 Artist's Proof
Okay, I REALLY like Aficionado, guys. I think this is one of those rare brands I managed to get a whole box of for Christmas when I was a kiddo. The tasteful sepia, the understated nameplate in gold foil, the GIANT STIPPLED HOLOFOIL HEAD - there is just nothing I don't love about the design here. These AP's fell one per TWO boxes, so they're no easy get. There are tougher parallels that didn't make the Top 30 this year; but my deep, abiding love for Aficionado catapulted this one onto the list. 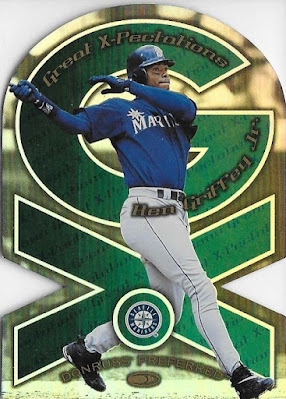 God bless you late-90’s Donruss, lords of the die-cut partial-parallel. Only the first 500 of these were die-cut (as was the case with a lot of numbered Donruss inserts), and this one in particular just seemed like an amazing deal. And no print line!

Topps really busted out the Simpsons references in 2019 with a Throwback Thursday set in the classic Topps Simpsons design as well as these pretty nice triple relic jobs. Can’t blame them, tho. That episode slaps. We’re talkin’ sooooooft-baaaalllll…. 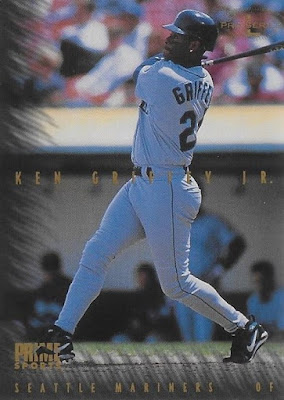 I’ve always been an absolute nut over Griffey oddballs, and the man has plenty of them to go around. I mean there are mountains of the things with some more scarce than others; but few approach the scarcity of the infamous 1996 Liberty Satellite Sports set. Rumor has it (and by that I mean I have read it from multiple independent sources but have no hard confirmation of this fact) only 50 cards of each player were printed and given away in sealed sets to employees of Liberty Satellite Sports. Such a print run from a conventional brand would result in some serious values. And just to add to the fun, they’re also extremely condition sensitive. Yay! 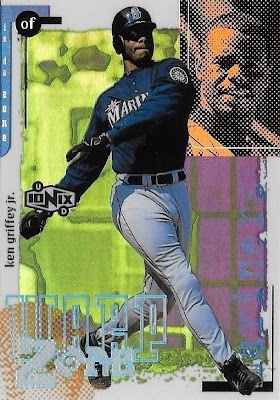 Pound-for-pound (er, card-for-card?) Warp Zone is one of my favorite inserts of all time. The 2000 version was #15 on the 2017 list. It was only around for two years, but in that time it produced two above-average Griffey cards. That’s batting a thousand, baby. 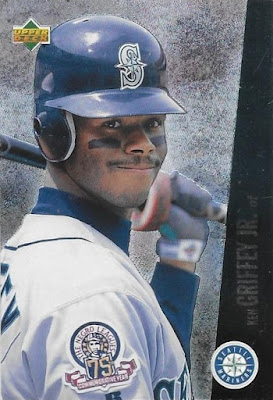 There’s a lot of mystery surrounding these things (though not for long - hint, hint). Long story short, they were sold in vending machines, possibly regionally, and they are a little smaller than normal cards. Despite having been officially-released Upper Deck cards, they still dwell somewhere in the sphere of the oddball. They’re also a massive pain in the tuchus to find, particularly in good condition. Good luck. 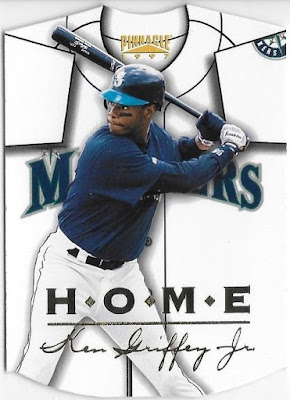 These were 1:33 magazine packs similar to the infamous Skylines insert. While there is no official word from Pinnacle regarding differing print runs of the Home and Away versions, there seem to be many more of the grey Away jersey version out there. They were always just a little more than I wanted to spend, but this one became a must-get in my quest to complete the Pinnacle flagship Griffeys. I resent the expense given the affordability of the Away version, but I got what appears to be a deal by today’s standards. And it really is a great-looking card as well as a cool concept for die-cutting.

Okay, fun start. Nothing mind-blowing just yet, but I promise we have plenty more also not mind-blowing cards ahead. Thanks for reading.