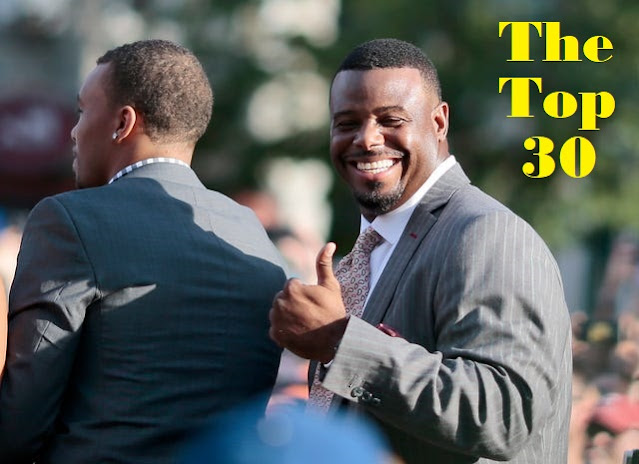 So baseball every kind of cards are having a big year. Have you noticed? LOL.
This is a blessing and a curse. The prices of Griffeys (and just about everyone else for that matter) are sky-high, but also the prices for Griffeys are sky-high! Woo-hoo! My COMC account always seems to have credit now as everybody buys up all my stock, but all the one- and two-dollar Griffeys of yesteryear are now listed at 10 and 20 bucks a pop. It’s bittersweet to say the least.
I suppose I'd be more bothered by it were I just getting back into collecting now as opposed to in 2011 when I actually got back into it. Looking back I should have bought ALL THE GRIFFEYS I COULD FIND back then. Hindsight is 20/20. Ugh. I hate how on-the-nose that is.
Okay, here’s more cards: 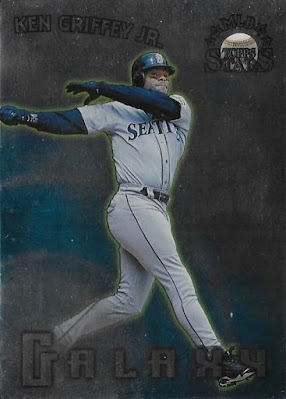 This year of Topps Stars has some real monsters, the coolest of which are these Galaxy cards. There are no easy pulls from this set – the most common being the #/100 Bronze parallel. These silvers fell at just shy of 1:1000, but there were also Gold and Gold Rainbow version that go up to 1:13k packs. Nope. 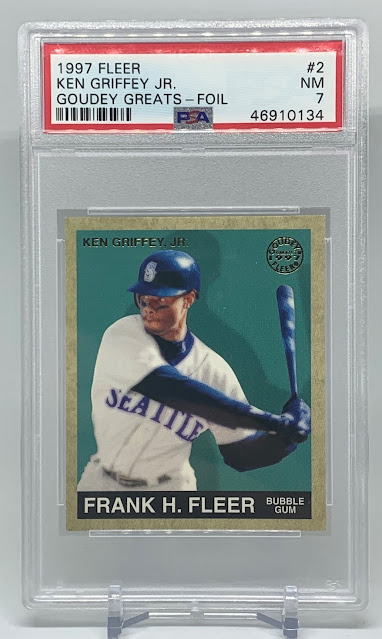 At 1:800 (or 1:22 BOXES) of Series 1 only, these puppies are some of the scarcest insert parallels of the ‘90’s. While I don’t know how many are out there (I have guesses), I can only confirm that there are not freakin' many. Then again they’re not super well-known or sought after – probably because they’re pretty plain, TBH – so if you find one you can grab for a reasonable sum, I suggest you go for it. 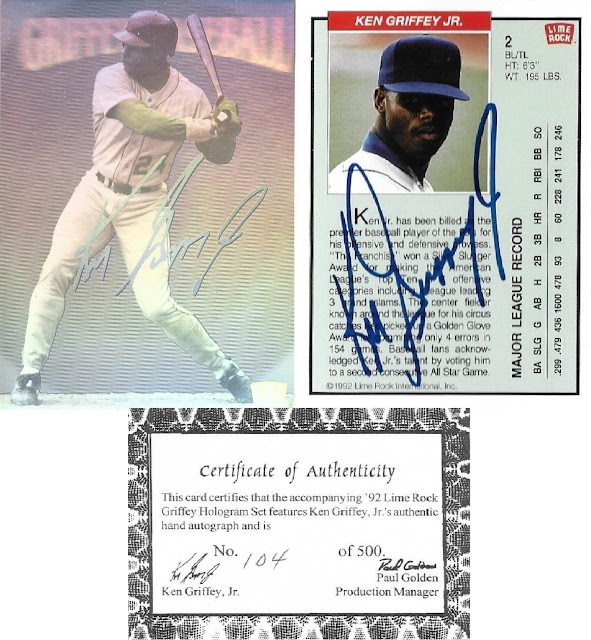 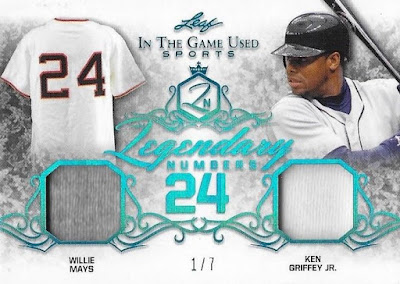 I mean, it has a piece of Willie Mays’ jersey on it is obviously the main thing here. The tattered look of vintage relics, am I right? Pretty thing. 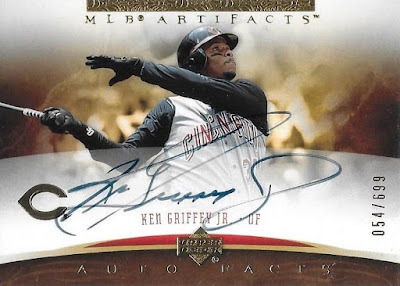 Not all autographs are created equal, and I just really liked the look of this one. Also most of the signatures I’ve seen on these are in blue ink, but this one is black. I don’t know why that made such an impression on me, but it did. The fact that it’s on-card sealed the deal. 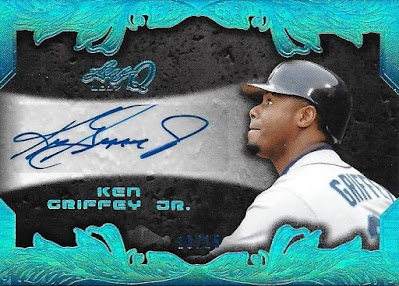 I don’t think collectors take today’s Leaf too seriously, but I really like their stuff (they've been on several of these lists even appearing at #1 just last year, and they make up a whopping 13% of this year's Top 30). Take this Q brand. While many of their recent offerings are rehashed versions of classic Leaf products, Q is all original, and they look really good. This particular one was priced way too low for my liking, and for that I will not stand. 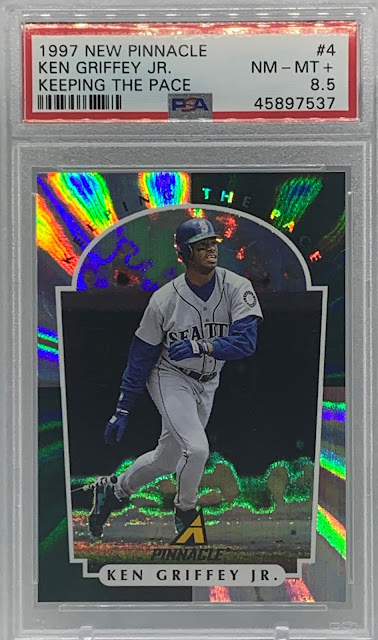 I decided to finish off all the Pinnacle flagship Griffeys in 2020, and while I did try to justify not including those from the one-off “new Pinnacle” set, in the end I had to get them as they are Pinnacle flagship Griffeys any way you slice them. Of the three big hit Griffeys I needed to complete that set, the least scarce and the most expensive was this, the bold & beautiful Keeping the Pace insert. 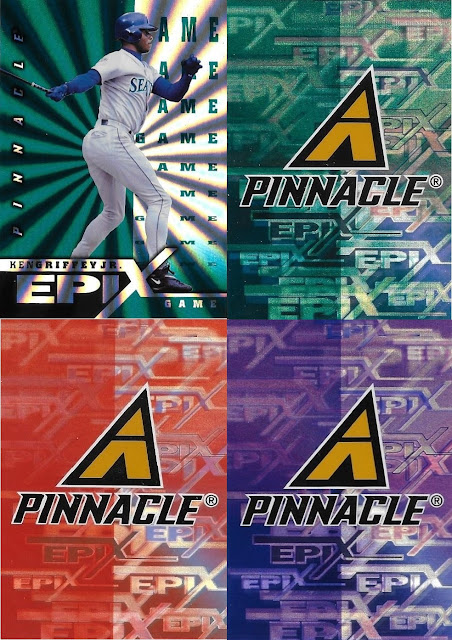 Any Emerald from this set is a prize, but I was more excited about the stupid header cards which are a major pain to track down. I’m only one Emerald short of the complete run of officially-released Epix Griffeys (there are a handful of the unreleased Emerald Moments out there that were backdoored, but that’s none of my business….).

I have a confession: I bought this specifically because I did not believe it could exist. The moment it came in the mail I started looking it over for signs of tampering. Slits, broken seals, signs of resealing - anything. Of course I found nothing out of the ordinary extraordinary which should come as no surprise as it made it onto the list. My new favorite sealed pack Griffey. 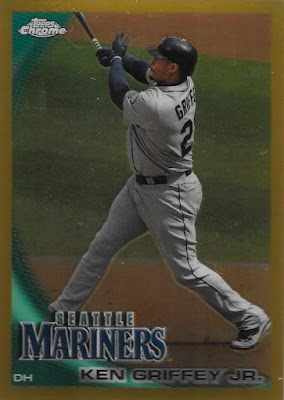 One seriously tough parallel of Junior’s sunset Chrome card, and I would like to mention that this scan does not do it justice. The insertion ratios of 1:232 hobby/1:775 retail aren’t insurmountable, but factor in the 220-card base set and these puppies become near-impossible pulls. I acquired this one directly from a man whose claim to fame is collecting the complete rainbow of this card in both the regular and Chrome versions, including printing plates and the 1/1 SuperFractor. The man is a beast.

Okay, Top Ten coming up next. Don't get your hopes up too much - this is still 2020 we're talking about. Thanks for reading.