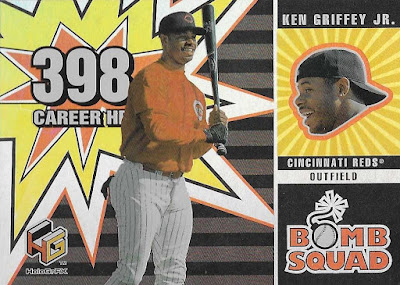 Where the designs of the previous HoloGrFx set were all pretty similar in aesthetic, this year’s offering is a little all-over-the-place. We got everything from simple, understated portraits to bold, wacky cartoon elements to spacey fields of stars and swirling intergalactic detritus. The thread of futuristic design that binds them remains intact, but homogenous they are not.

One of the coolest highlights of this year’s HoloGrFx set is a relic insert featuring game-used swatches from the 1999 World Series. Some were even autographed. It was probably the timing of this release and not the design that made Upper Deck include these in this particular set.

A quick note: as cards from the Ionix and HoloGrFx timelines can be a bit confusing, one helpful tidbit is that all 2000 HoloGrFx cards are horizontally-oriented. Also they say "HoloGrFx" right on the front which helps too.

The card is cool, but the design is a little weak. I mean, it’s shiny. A little sparkly. The lines are cool? I suppose my biggest gripe here is all that negative space that is seemingly there just to give you a good, uninterrupted look at the sparkly and also the lines. I’ve spent a measurable quantity of time looked for a watermark or a hologram or something that might be hidden in that big ol’ field of lines, and there is nothing. Just the lines. Lots of them. They remind me of the tesseract at the end of "Interstellar." Maybe there's black hole data hidden somewhere in there... 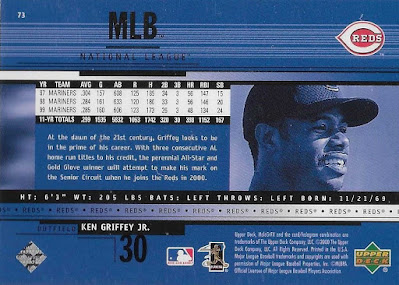 The back is nice enough. I really do like the way they blued out the whole thing, including the photo. It’s not blowing anyone out of the water, but it’s reasonably attractive.

That’s it for the base set. Just one okay base card. No cool parallels or subsets to redeem this one. Here’s hoping the inserts show up. 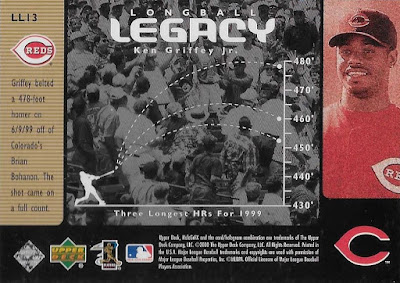 The easiest pull at 1:6, Longball Legacy give us some unique, logo-matched colors and a great stat box featuring Junior’s longest dingers. That same photo of the Kid makes three separate appearances on this card, but my favorite photo here is that crowd background in the dinger chart - specifically the kid in the middle having the best day ever. 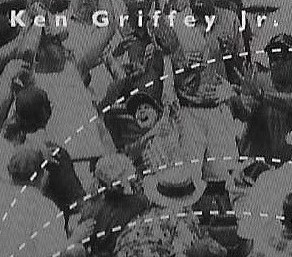 I bet it was all downhill from here. I mean, come on - a moment like this has got to burn up, what, ten years of karma? Longball Legacy Kid, if you're out there, comment below and let us know how you're doing. 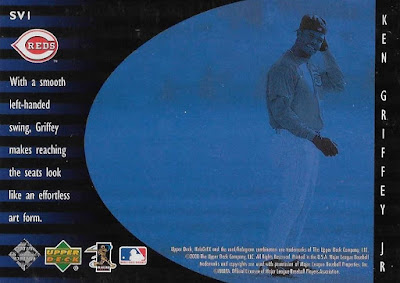 StarView is really cool this year. Where the previous set’s StarView insert was characterized by emerald green cracked foil, this one is much more literal with a field of small holographic stars filling the negative space. Said curved space carries over to the back where in lieu of stars it is a monochromatic photo background. At 1:11 they’re pretty easy to track down, too. A highly-recommended value get for the budding Griffey getter. 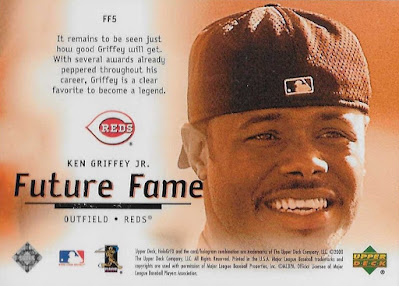 At 1:34 this insert ties for the toughest get of 2000 HoloGrFx. Once again this card features one photo recycled three times on the same card. It’s a good shot of our guy and works better as a portrait than a full-body shot. Apart from the surface-wide gold-tinted foil and a very flattering blurb, there’s not a whole lot going on here. Simplicity seems to be this card’s strength, but just the year before every design was so off-the-wall and interesting. Am I the only one who finds this year’s designs a little underwhelming? Nice pic, tho. 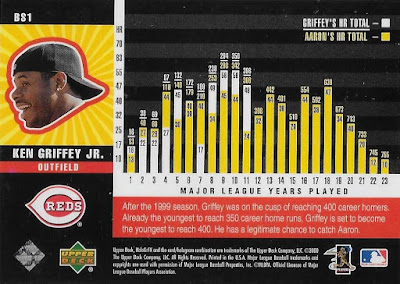 At 1:34, these are the toughest pulls at just shy of one per 1.5 boxes. How we went from ultra-simple and understated Future Fame (the exact opposite of last year’s version, btw) to this wild comic book card with one of the coolest stat visuals ever to grace a card back, I will never understand. I will say that the only thing that could improve this particular card would be Seattle colors. Apart from that it’s basically perfect and an absolute blast to spend time with. Rest in peace, Mr. Aaron...

There is just one more insert from this set that I want to show because it really struck a chord with me: 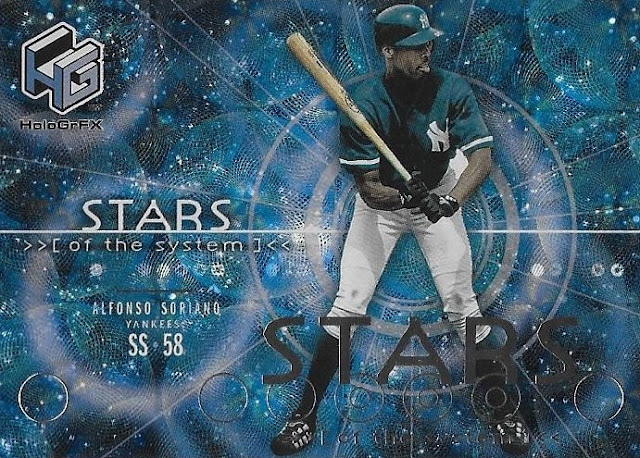 This gorgeous piece of eye candy is Stars of the System, and it is the coolest 2000 HoloGrFx card I own. I am fruit for space-themed cards, and I don’t believe I’ve seen one better-executed than this. The placement of the center of that starburst/nova is a little suggestive, but apart from that the whole thing is damn beautiful. THAT is how you do a sci-fi baseball card, people.

There’s nothing here that will break the bank – you can actually complete the entire Griffey checklist PLUS a common Stars of the System card for less than 20 bucks. It’s worth it for a few reasonably cool Griffeys and two very cool ones.

Next week we will take a look at my favorite of the Upper Deck’s millennium futurephile sets: 2000 Ionix. Thanks for reading.