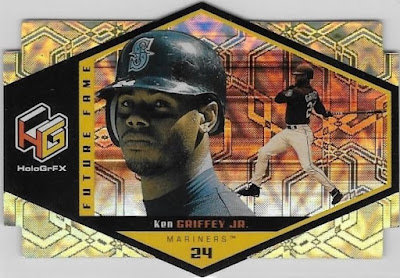 Were you a bigger fan of Back to the Future II or III? As a kid I was waaaay more excited about Part II what with all the cool futuristic stuff. I mean flying cars, flying skateboards, tiny pizzas that became normal-sized pizzas, and fax machines in every room. It was everything a kid could want. My cousin was a bigger fan of the third one; and while III was a better movie overall, the cool, colorful tech stuff of Part II won me over.

So if you were a future-phile like me, Upper Deck had you covered in a major way. While many brands were already starting to go vintage in their designs, Upper Deck went in the opposite direction with a pair of fun, tech-forward brands with identical 1999-2000 timelines.

Pretty much every aspect of these two sets from the general aesthetic right down to the logos is so similar that they are easy to confuse, so hopefully these posts will help distinguish them better.

While separate and distinct from one another, HoloGrFx and Ionix have enough in common that it makes sense to present them together, and we are going to start today with the totally awesome Griffeys of 1999 Hologrfx.

The base cards all have the look of an exotic parallel with every inch made up of wild, swirling holofoil. The effect is quite busy despite the design being so simple – essentially just a logo and simple nameplate with a little team-colored field of color. 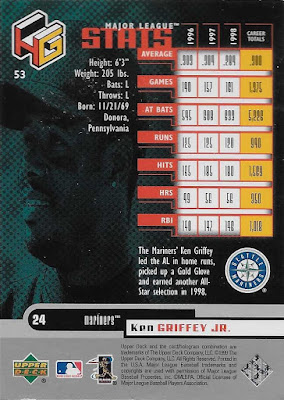 Despite the wild look of the stat box it’s actually pretty standard. That description carries over to pretty much every aspect of the back: unique at first glance but nothing out-of-the-ordinary. 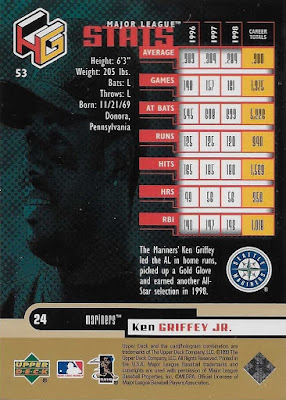 From the name of this 1:8 parallel you might expect more, but when you get right down to it it’s just a fun way of saying “gold.” The “ausomeness” carries over to the back of the card as well. 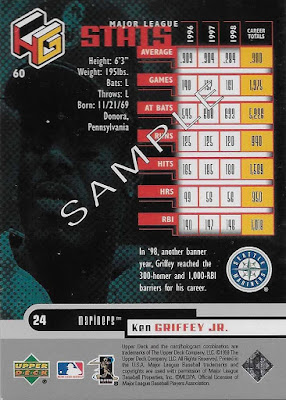 The only real difference in the sample is the photo selection. These are not rare, but it is pretty rare to get a sample with a completely different card number.

In any other set this insert would be a monster, but the coolness here gets a little lost mixed in with all the super cool designs and effects in the rest of HoloGrfx. If you have one (and odds are good you do as they are not rare or expensive), I recommend taking a long look at it under good light. The effect of the overlapping circles is really something to behold. It’s like looking through a dimensional portal. Putting this effect on a 1:4 insert was a gift from Upper Deck. 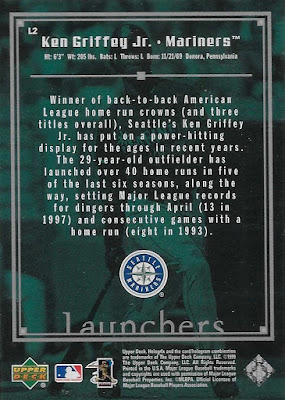 The back is a simple framed block of text over a muted version of the front photo, but the blurb is great and even matches the theme of the set. 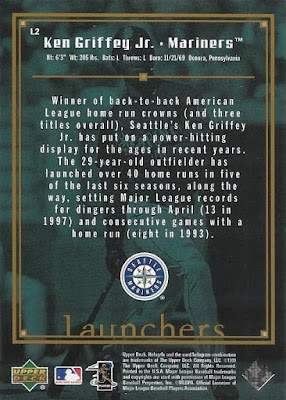 Nearly all the inserts from 1999 HoloGrfx come in a gold parallel, and as simple as they look they are no joke. This gold version of the Launchers insert is the most common, and it is seeded at a whopping 1:105 packs or about 1:3 boxes. A little mystique may have helped sell these as the scarce pulls they were, so why they decided to call the insert parallel “Gold” instead of keeping with the fun and interesting “AUsome” I will never understand. They remain some of the most affordable 1:triple-digit Griffeys I know.

A little scarcer at 1:16, StarView does not have the fun foil effects of Launchers, but it’s still a looker by any standard. I’d like to have seen some wild holofoil patterns or something, but the central effect seems to be the silver foil starburst emanating from the insert title. 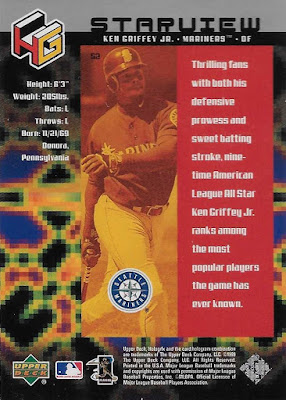 StarView gets the award for coolest card back in the set. I like literally anything with that Predator-vision background.

I don’t have the gold version to show you, but you can imagine it, right? Gold where this one is silver. Oh, and 1:210. Yikes.

Wow. Now that’s an insert. Upper Deck was real proud of their hexagons here, and I can’t blame them. It’s a unique pattern particularly in the fields of holofoil. Very hotel-carpeting-from-The-Shining. The eye appeal here cannot be denied – the portrait is great and the die-cutting unique, but I prefer the unique overlapping circle pattern of the relatively common Launchers insert. 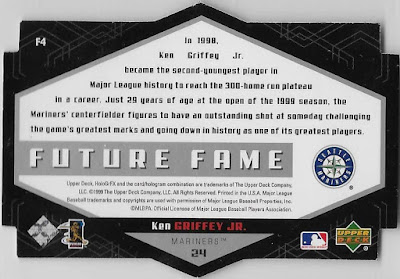 Future Fame fell at a tough 1:32 packs which, paired with the exotic design, has resulted in respectable value. And with a black border on the back and ten corners to worry about you can expect a premium for higher grades. But if it’s value you want, spend a buck fifty on Launchers. 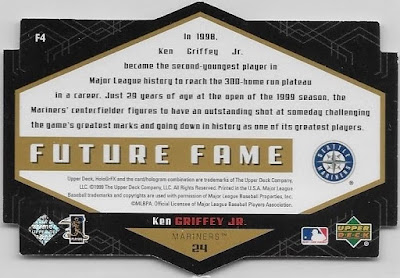 Again it’s the same basic design in gold, but at a whopping 1:432 packs this is the toughest pull of 1999 HoloGrFx by the slimmest of margins.

I don't actually have one of these, but it must be shown. Any officially-released pre-2000 autograph is considered a serious get nowadays, and this one just happens to be one of the better looking of the bunch. At 1:431 packs this insert is just a pack shy of being the toughest pull despite that excellent on-card auto. Great design here.

Here are the cards I need from 1999 HoloGrFx:

I'm not all that excited about the gold Starview, but the auto is on my short list of current wants. Maybe this will be the year...

Okay, '99 Ionix is up next. Thanks for reading.