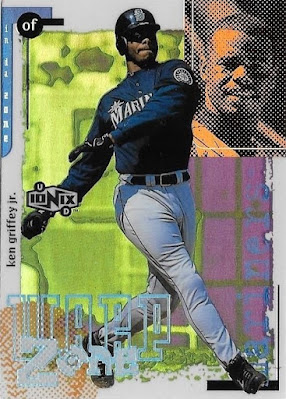 Having just done a post about HoloGrFx, it's clear that it doesn’t take a “card guy” to notice the similarities between the two sets. But why two thematically and aesthetically identical sets? Sure, this kind of stuff was right in Upper Deck's wheelhouse, all decked out with crazy lines, shapes, and patterns and set off generously with foil and refractor effects.

I can't really complain. It’s like they took the techy inserts of Stadium Club and made whole brands out of them. Every card right down to the commons could be a prize in any other pack. And speaking of prizes, this is the set that contained the Frank Robinson Piece of History 500 HR Club card.

The market-wide shift towards vintage designs was on the horizon, though. I suspect that had a lot to do with this one disappearing. That and possibly the expense of producing them at all. If that really was a factor, I can't help wondering if sticking with just one set might have made a difference.

There is a lot going on here, and while I’m tempted to just say “Look at all that! Crazy, huh?” and move on, I am also determined to fit every design element here into one sentence: SO, here we have a rainbow-colored topographical chrome background bordered on one side by a vertical nameplate, a stippled-fade partial border with a black corner square to accentuate the foil logo, a small inset portrait in shiny yellow, and a starburst effect radiating from behind the large, centered action photo, all made extra shiny by Chromium stock. That is at least seven more elements than a base design really needs, a fact which, in itself, is a good general description of all Ionix cards. 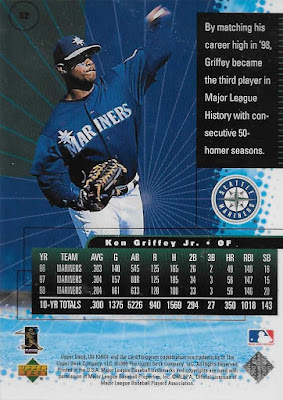 Personally I am a bigger fan of the back which appears to be at least a little more focused on subtlety. They carried over only the stippled borders and the starburst which is a much more reasonable number of elements. The slight highlighting of the top edge of the stat box is a nice little touch.

While Chromium historically lends itself well to a refractor parallel, there is none here which sucks because with everything that’s going on, a refractor of this thing would look wild. The parallel instead features a swapping of the front and back photos which they called “Reciprocal.” I like the idea, but I’d have liked it more were it a “true reciprocal,” that being a straight-up reversal of the entire card front (or even just the photo). It would have been fun just to see ol' blurry-arm batting righty. 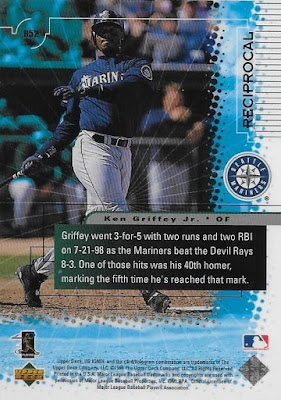 I mean, it’s okay. I still think my original interpretation of “reciprocal” would have made for a more fun and memorable parallel.

The short-printed (1:4) Techno subset is a better design than the actual base cards all day. Where the base is a random conglomeration of clashing elements, the Techno cards are a lot more balanced and attractive. And yet again, they’d have looked killer as refractors. 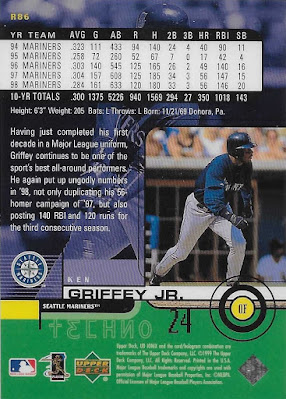 Don’t get excited about the “R” prefix – in the case of this subset (and ONLY this subset), the “R” stands for “Techno.” They included an additional year of stats as well as a better blurb than the base card. Man, Techno could have been yet another brand if they really wanted to churn out the future designs. I’d have been a buyer.

Here is where I would put the flip-flopped photos Reciprocal version, but it's #/100 and I have yet to even see one.

You will notice that as the cards get more scarce they also get exponentially cooler. It's like a logarithmic curve of awesome. 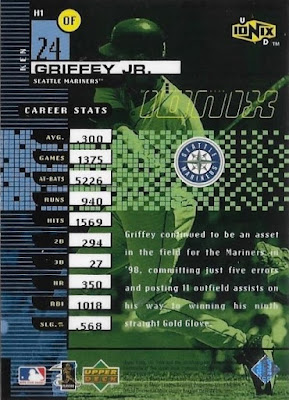 The 1:9 Hyper insert looks like what the subset might have looked like had Techno been the base design. Honestly all the cards so far would have made perfectly reasonable base designs. At least we finally have some refraction now. 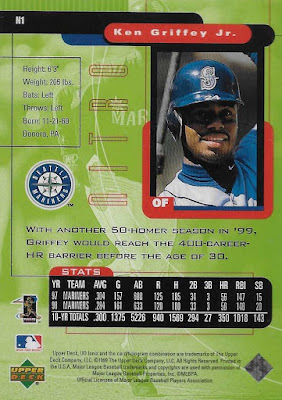 Again, a great base design that they designated an insert. These fell 1:18 and sell more or less in the base card price range which should come as no surprise because everything about it is super base-y. 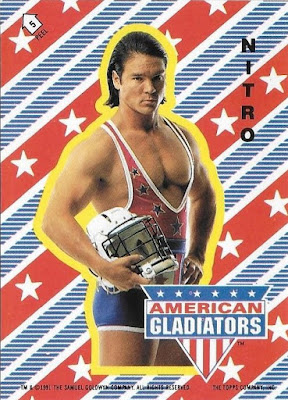 Oh, and I hope you like American Gladiator names, because Ionix is full of them. 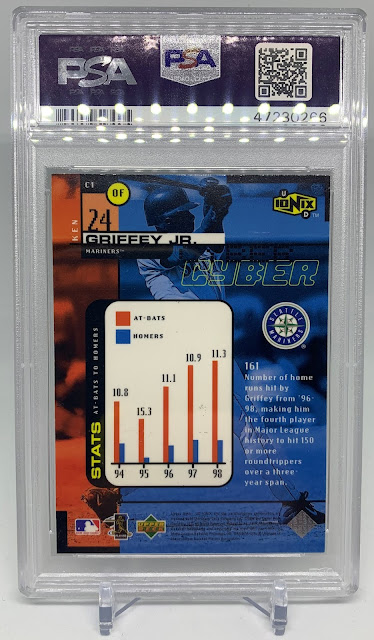 This is the point at which Ionix cards start getting really cool. And wouldn’t you know it? It’s also where prices start going up. While this does use the same nameplate as the Techno subset, the 1:53 Cyber is the first Ionix card that really looks like an insert. The highlights here are the colorful front and the stat boxes unique to the strengths of each player in the checklist. And they only get cooler from here on.

Wasn't there an American Gladiator named Cyber? It was a hot-but-very-muscley lady, right? Who am I thinking of? 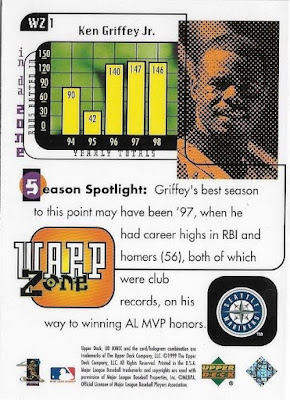 At 1:216 we are now deep into the Ionix insert game, and this thing really looks the part. The brighter colors here, particularly the white borders, bring out all the fun visual effects at play. The only question I’m left with is do we call it “Warp Zone” or “In Da Zone?” because they are both very much on there.

Um, shield your eyes or something....

This….THIS is the big get from all four HoloGrFx/Ionix sets. The one pictured here is not mine and probably never will be. Some inserts are so cool I will try and pick up a cheaper one just to show it on this blog, but there are no “cheaper” ones to be had. These 1:1500 bad boys are simply expensive and always will be.

It’s obvious why: it’s just indulgent as all get out. The grid design has a slight rainbow gradient to it that sets off the refraction like few other cards can. It makes me think of this quote from Season 3 of Futurama:

Fry: "I just saw something incredibly cool! A big floating ball that lit up with every color in the rainbow, plus some new ones that were so beautiful I fell to my knees and cried."

Amy: "Was it out in front of Discount Shoe Outlet?"

Amy: "They have a college kid wear that to attract customers."

I would imagine a card collector in 1986 seeing this insert and having a similar reaction to Fry. It’s a hobby wonder regardless of what era of card technology you’re living in. 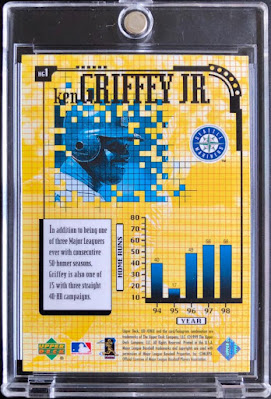 If you’re like me you may also be wondering why 1999 HoloGrFx didn’t have an insert called “Ionix.” I don’t have release dates for the two sets, but my guess is that Ionix came first; and Upper Deck just really liked that insert name, missing letters and all, and devoted a whole other brand to it.

#86 Techno Reciprocal #/100
HoloGrFx #H1
And now let's try and remedy that. On to the packs!
I would absolutely lose my mind and never buy a pack again if I pulled a HoloGrFx insert of any kind. The Techno Reciprocal would be nice as would the Frank Robinson Piece of History 500 HR Club, but the HoloGrFx is the real prize today. And always. Forever.
Maybe let's just hope for a Griffey or two... 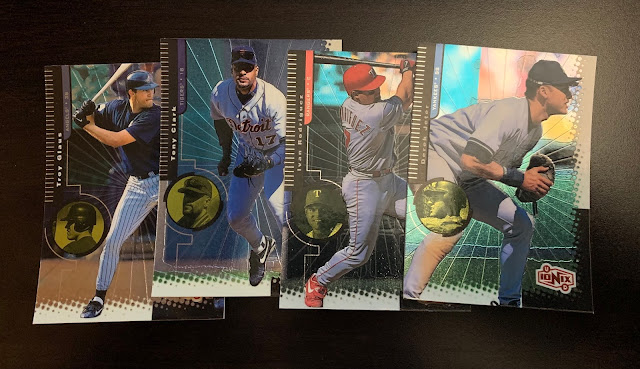 Okay, there are worst ways to start than a Captain card, and a Pudge to boot. 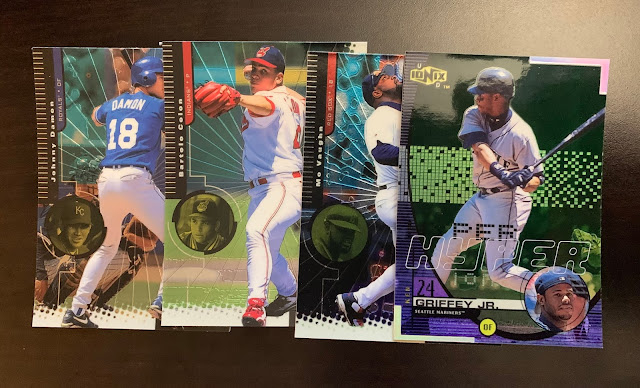 Wow! A lovely, pack-fresh 1:9 insert hit of the man himself. I'd say we're pretty ahead of the game at this point. 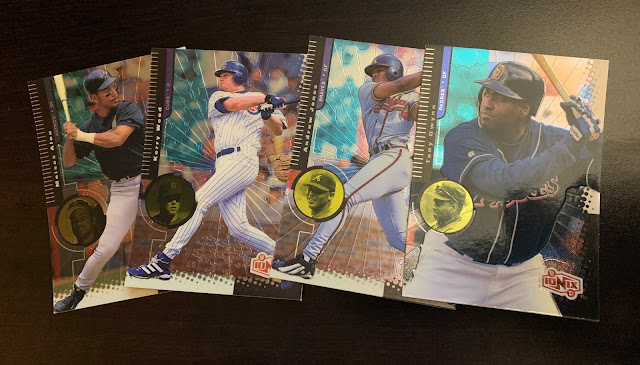 Okay, I like Tony Gwynn. And that would be a "pitcher at the plate" card, too. One more... 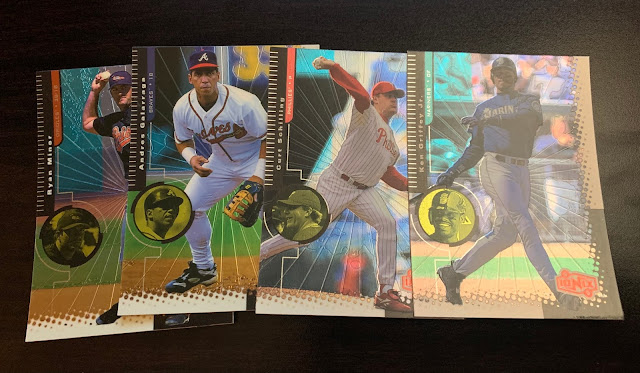 A Griffey insert and a base card? Yeah, that's a win. Go us. I can all but assure you these will not be the last 1999 Ionix packs we will be opening.

We’re now halfway through Upper Deck’s two-year run of futurephilia. Up next will be the HoloGrFx and Ionix sets of 2000. Spoiler alert: one of those is the best of the four sets. Thanks for reading.